Instead of continuing to successfully decriminalize drugs, this ass is instructing prosecutors to ramp it up.

Sessions issues sweeping new criminal charging policy
Attorney General Jeff Sessions condemned "too much talking about recreational drugs," in today's society at a summit in Charleston, W.V. on May 11. (Reuters)By Sari Horwitz and Matt Zapotosky May 12 at 6:00 AM

The Holder memo, issued in August 2013, instructed his prosecutors to avoid charging certain defendants with drug offenses that would trigger long mandatory minimum sentences. Defendants who met a set of criteria such as not belonging to a large-scale drug trafficking organization, gang or cartel, qualified for lesser charges — and in turn less prison time — under Holder’s policy.

But Sessions’s new charging policy, outlined in a two-page memo and sent to more than 5,000 assistant U.S. attorneys across the country and all assistant attorneys general in Washington, orders prosecutors to “charge and pursue the most serious, readily provable offense” and rescinds Holder’s policy immediately.

The Sessions memo marks the first significant criminal justice effort by the Trump administration to bring back the toughest practices of the drug war, which had fallen out of favor in recent years with a bipartisan movement to undo the damaging effects of mass incarceration.

“This policy fully utilizes the tools Congress has given us,” the attorney general’s memo says. “By definition, the most serious offenses are those that carry the most substantial guidelines sentence, including mandatory minimum sentences.”

[How Jeff Sessions wants to bring back the war on drugs]

The new policy is expected to lead to more federal prosecutions and an increase in the federal prison population. In February, Sessions seemed to prepare for that inevitability, reversing a directive from previous deputy attorney general Sally Yates for the Justice Department to stop using private prisons to house federal inmates.

Yates said at the time that doing so was possible because of declining inmate numbers. Sessions, though, said it had “impaired the [Bureau of Prisons’] ability to meet the future needs of the federal correctional system” — hinting that he saw a very different future for putting people behind bars.

In speeches across the country, including his first major address as attorney general, Sessions has talked of his belief that recent increases in serious crime might indicate that the United States stands at the beginning of a violent new period. He has noted that the homicide rate is half of what it once was, but he has said he fears times of peace might be coming to an end if law enforcement does not quickly return to the aggressive tactics it once used.

[The full memo from Sessions]

Sessions recently ordered the Justice Department to review all its reform agreements with troubled police departments across the country — which he says stand in the way of tough policing — and marijuana advocates fear he might crack down on the drug even in states that have legalized it.

The Sessions memo was largely crafted by Steven H. Cook, a federal prosecutor who was president of the National Association of Assistant U.S. Attorneys and is now detailed to the Justice Department. Cook was a harsh critic of the Obama administration’s criminal justice policies. The implementation of Sessions’s memo will be overseen by Deputy Attorney General Rod J. Rosenstein, who has come under criticism in recent days for the firing of former FBI director James B. Comey.

The new policy revokes Holder’s previous guidance to prosecutors to not specify the quantity of drugs in the charges they brought to avoid triggering mandatory minimum sentences — provided the defendant did not have a significant criminal history, was not violent, or was not a leader of an organization or tied to a gang.

That was particularly significant, because large quantities of drugs typically forced judges to impose stiff sentences — 10 years for a kilogram of heroin, five kilograms of cocaine or 1,000 kilograms of marijuana. Prosecutors, too, could use the threat of a mandatory minimum penalty to facilitate plea bargains, and some were irked that Holder’s memo stripped them of that tool.

Cook has said that the Holder memo “handcuffed prosecutors” and it limited when “enhancements” can be used to increase penalties, an important leverage when dealing with a career offender and getting them to cooperate.

Sessions’s memo says there could be exceptions, but those cases must be approved by a U.S. attorney, assistant attorney general or other supervisor, and the reasons documented in writing.

The memo also directs prosecutors to always pursue sentences with the range calculated by federal guidelines — which are sometimes above even the mandatory minimums — unless a supervisor says it is okay to do otherwise.

“There will be circumstances in which good judgment would lead a prosecutor to conclude that a strict application of the above charging policy is not warranted,” the memo says. “In that case, prosecutors should carefully consider whether an exception may be justified.”

Imp was not the word that came to my mind Cat, 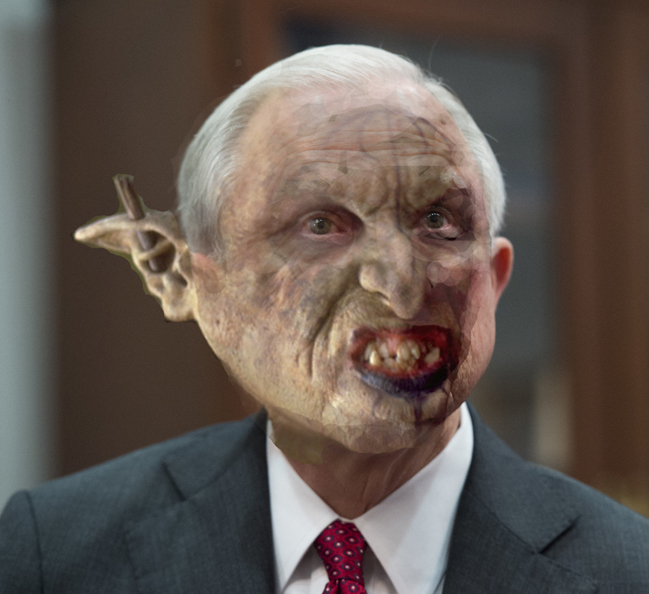 I'm sure that they were too busy working in their meth labs.

Public opinion at election time can create new policy and new law (if your congress critter follows through), but as "the public" it is OUR job to toss the bastage out for his failure to represent our needs and put someone else in office.

As a voting block, sadly, we continue to put them back in office, over and over again. They are rewarded for making the public promises they do not intend to honor.

Who's the blame really belong to again? I vote every time I can. Has anyone written a letter to their representative? I feel outnumbered at election time. Am I wrong?

Stronger local government is, has, always been my solution

Do it at a local level and everyone is working from the same place and the goal is meaningful to them. People move around seeking a place they fit in, and when they find one, the rules there will be based on the needs and desires of similar minded individuals.

Federal was intended to do stuff to big for a single state member like defense, interstate travel and trade, immigration and disaster relief. I'm sure I am missing alot.

So basically I just outed myself as a libertarian of sorts huh? Ooops

I actually do write letters to congress.

I have been an activist for 10+ years, and send letters, sign petitions, attend resistance movements, and contribute what little I can financially, to every cause I support.

I vote in every election, (well, maybe not the ones with a couple school board positions and not much else)

I truly believe it is the resistance that has kept this administration from moving its agenda forward any more than they have. It's not easy for an elected official to completely ignore masses of petitions and letters, unless they are following their own agenda that is in line with the current powers at the top. We have "replaced" representation with new blood when necessary.

I will use Kratom as one example, where DEA was met with a force of resistance including senators, unlike anything they had dealt with before, and rescinded their plan to reschedule this herb as a narcotic equivalent.

The growing Marijuana industry stands to make a lot of revenue for states that have legalized it. I really don't think one little toady in the cabinet is going to be able to stop the progressive movement, just because he is in that position. There is lots of incentive within the states to not go, or allow the government to go, the route of stepping backwards into the days of Reefer madness...........

It's probably because if one is full of self loathing and/or hatred for others, it takes it's toll on one's face over time.

One thing to say about the current state of affairs, it's sure not sustainable.  Spitting in the eye of popular will could cut some sessions short.

Give Sessions a surprise pop quiz in the form of a urine test (among other government officials...).

Having known a number of trust-fund kids in Sessions' home State whose parents donated considerable funds to his Senate campaigns over the years (so the parents therefore knew him personally and hung out with him socially), I'd say that I'd bet my house that he'd fail... for THC (at least; that's the only drug they've admitted to consuming with him on numerous occasions).

Thanks to those "kids" (who are mostly in their 30's and 40's now, and some of them are not insufferable, actually) I've smoked joints with folks most wouldn't expect to be into burning one, like a current Federal Judge and a sitting member of the Federal Reserve Board as just two examples.

So I know from... uh, secondhand experience (yeah, that's it...) that a great many of these two-faced high-functioning psychopaths are unrepentant hypocrites of the highest order (so to speak). I should add that the Judge and member of the Reserve were both pretty cool people and not among the two-faced psychopathic hypocrites; that phrasing referred to people like Sessions who say one thing and do another. The Judge favored legalization but unfortunately doesn't rule on criminal cases and the Reserve board member supported lots of local improvement projects and taught me how one actually gets a seat at the Reserve; basically you have to be a member of an old-money family that owns a shitload of real estate. In other words the very people whom most of the Founders thought should be the only ones allowed to vote in their new Republic (an awkward fact that's not covered much -if at all- in most U.S. History classes, oddly enough). I got the impression that the Fed is comprised of all of the individuals who REALLY have the right to vote. The rest of us are just pulling placebo-levers, at best.

But anyway, I'm not too worried about these developments. Chaos Theory is rolling its metaphorical eyes at the pinheaded hubris of trying to impose all this Order. Just wait, we'll see it blow back up in their faces soon enough.

Top-shelf, of course. Which is to say that they were usually burning from my stash. And burnin' one with 'em isn't quite the same thing as hangin' with 'em. We just happened to have a couple of friends in common and ended up on the same back porch on a couple of occasions.

One night in particular stands out in my memory because I remember asking the guy whose house it was (while passing him the joint) if he was concerned about the fact that there was an elementary school across the street, to which he answered (sounding exactly like Chong): "My house is a school, man!" (which it was since he and his wife are both certified teachers who run a mini private school from their home, mostly tutoring kids who are homeschooled). Well okay then; never mind!