Is this MJ-Flower turning cristata or am I tripping ballz over here?

I have never seen cristata growth in my life on any plant except for some cacti and a single chamomile flower when I was a child.
I never thought about it, but does this also occur within cannabis plants? Can't find any pictures when I google it....

In all these years, I have never seen anything like this before on my cannabis plants....tell me what you see...maybe I'm just, too excited and exaggerate...

Can I just leave it as it is? Or am I risking to get a hermaphrodite over here?


Example of chamomile with cristata growth... picture is not taken from me.

It's quite unusual, and beautiful in its own way. I have seen several types of plants develope this on rare occasion. I would leave it myself, just for the uniqueness, but have no idea if there is any risk.

Try polyploid on Google. Looks like flowering on polyploid.

Yep seems to be it, thank you! And I found some MJ pictures with mature buds, so I guess I'm safe to leave it as it is!

Now let's hope it exhibits all the "double" qualities!

Any webbed leaves or the like on that plant?

Nope..checked the entire plant today didn't see anything else unusual...will check it again in a couple of days.

That's beautiful actually...........I'm not a cannabis grower (because my social peers are fucking assholes) but I'm pretty sure that you can clone things like that.........

I've had really bad experiences stressing out plants while they are in the middle of budding season.
And I have no males to produce seeds...
This is happening only on a single side branch actually...the rest of the plant looks normal...

looks like a polyploid bud to me....definately breeding material....polyploids can produce insane cannabinoid counts.....My friend, you have a 1 in a million chance plant there....for your sake, I hope you do some breeding with her....

Weird it's only one branch, where the fuck did you get the seed cutting?

It's a cristata yes, or as I call them flatstems. The same trait that causes Ducks Foot to make webbed leaves can occur in bud growth as well. It has something to do with the abscissic hormones that are not properly expressed genetically; all plant cells and organs start as a nearly globular lump, and later differentiate into what they're supposed to become. For good differentiation, it's necessary for these parts to disconnect as they grow, so they can later grow into whatever 'organ' they're going to be. Abscissic acid is a hormone that plays a big role in that disconnection part.

These genetic dysfunctions are more common than you'd suspect; I found 2 this year, and a friend of mine had the same issue during the growth period. He needed to cut the stem open to get the growing tips out of there. The growing tips were locked inside the stem, because the abscissic hormones didn't function properly, leaving the growing tip behind inside the plant. What causes this trait in cannabis is pretty unknown, but it seems to happen with a small percentage of plants worldwide, with no real universal cause.

What I've noticed from growers finding these mutations is that there's an elevated hermie chance (if normal genes aren't expressed as normal, than other genes have a higher chance of being affected too). There's also a great chance of budrot, since the leafs and bud tend to just 'stack up' on each other, leaving little to no space for adequate ventilation. Transpiration from the leafs (i.e. moisture evaporating) can cause serious mold problems.

Here's a pic of what it looks like in the growth stage: 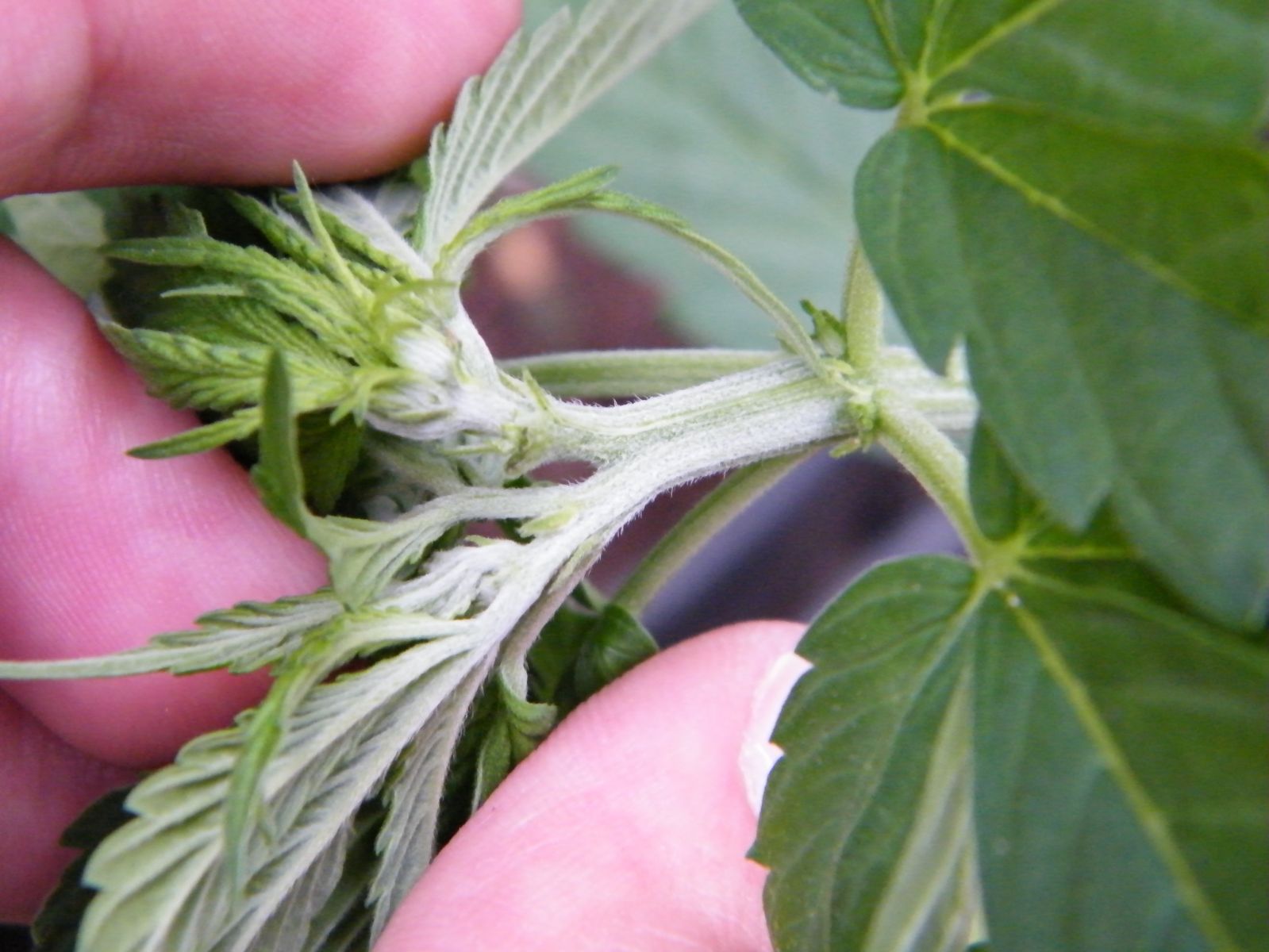 What we see here (on the lower node) is that the side branches did not grow apart and did not leave the main/central stem exposed. They just locked it up and grew conjoined. At the higher node, we see the same thing happening again. Usually this can be fixed by operation; cutting the stem in half, opening the way for the central stem. Lower growth did not show this kind of mutations, but all growth in the higher tips expressed these same kind of issues. Unfortunately, the 'operating' doesn't seem to work well with flowering plants.

The best advice I have is to just wait it out, and keep checking for budrot. If you don't have the time for that, and depending on your growing style (no lollypopping for instance), I'd suggest thinking about cutting the flowers off at the top, so the rest of the plant can still give you a decent yield. These cristata buds tend to be either all leaf and stem, or at least very little bud. Cristata's are fun, a rarity, a nice occurence to see, but increased yields or increased active substance productions are something I've never seen in these mutations. Maybe it's a myth, folklore or whatever, I've just never seen it happen. To me personally, it's more of a defect, than a bonus.

If you decide to breed with them, expect issues like my picture above to occur way earlier in the life cycle - note: I used clean genetics without these mutations, but if you breed for mutations, they'll happen more often -, causing problems of their own even before flowering, reducing growth potential and vigor by 20-40%. I'm relying 100% on side growth with that plant now, since the top keeps mutating and morphing into something that stops itself from growing.

I've personally, never had this happen, I've gotten triploids, and variegated plants, as well as midgets, but never a polyploid....

Thank you everyone for the input, especially to Jan. The plant is a Super Skunk from..Seed grown,feminized from Sensi Seed. I will not breed her but. def check for budrot every second day..

Polyploidity is something different. Normal plants (and most other organisms) have a division of N=2, whereas polyploid plants have a division in N=4 or more. But there's a thing not to be forgotten: this needs to happen from the seed or even before the seed is formed. Otherwise the plant will just use it's regular N=2 and N=4 cells at random, causing massive issues in growth pattern. Polyploidity is known to increase a large number of plant traits and breeders commonly use it on nearly every commercial flower because it simply makes them bigger. Everything is twice the size, and so are THC crystals. Forest Violets (Violaceae) usually have 1cm flower max. in the wild. But in stores we buy the flowers which are 4 times larger. Those plants have all been treated with colchicine.
It's becoming a more common practice for chefs to use these violets and other colchicine-treated flowers in salads and meat dishes, while they're unaware of the possible dangers of colchicine residues.
There's a great deal of colchicine treatments going on in carnivorous plants as well, imagine the Super Mario sewer plant, but this time for real! That would be awesome, and a bit scary at the same time. People are in fact, trying to make those.

People have been trying this with cannabis as well, and it seemed to work, doubling the plants in size. The legends whisper that the first Skunks in the past were only as potent as they were, because of this treatment. I'm not sure if it really is true, but I can imagine breeders wanting to try it out. I mean, the stuff is cheap, testing is cheap, it takes just 3 hours to treat 4000 seeds and the results are known within just a few weeks. It's pretty rewarding if it would work. However, after something like 8 generations, these traits are usually lost. If plants propagate in a vegetative manner (suckers, etc.) then these traits are usually lost after 2-3 'steps' away from the mother plant (in other words, there's a motherplant(+) -> sucker (+/-) -> sucker-from-a-sucker (-).)

Cristation/fasciation is a different thing: the lack of differentiation or proliferation of plant 'organs'. It has not much to do with the number of cell divisions one cell can make. It's a genetic defect/thing that just removes some much needed household genes that would normally let a leaf become a leaf, and a bud become a bud. Cacti are selected for that mutation sometimes, I wouldn't want it in plants that form flowers, since those are the source of my weed.

Here is an update on my Super Skunk cristata flower.

And one of my AK47 also started to do weird things...first I thought it's a cristata as well, but the two tiny heads are not conjoined.

Bloom is in absolute full progress right now and you can see a drastic change within 1 week. The entire plant is very healthie only for the fact that I overwatered it again this week with too much valerian extract. I will keep my plants a little bit dry now for the next few days....Hope this will bring me some fantastic skunk! No sign of rot or mould in this Cristata flower as of yet...