Nice dude! I was woundering when you were gonna hop back on this, picture's look great! I've been waiting...

Since it seems he has harvested his grow already. Here's a picture of my grow this year. Girls just switched to flower a week ago not to shabby IMHO.

California Kush/Haze on the left and right and good old white widow in the middle :). The planters are 24" tall the ladies are 7'-9'. If there is any interest I will update as flowering continues

I only harvested Satreeva 1...the most budded one that has quite yellow leaves. The others I will harvest when it seems like the the best time.

I can breathe again.  Its good to grow in an honest, and well hydrated neighborhood.

Thank goodness for friends helping water several times while I was away
..else I'd be sunk with nothing to vape.

Not sure if the pinkness is coming through in the pics. Screenshot blowups seem to diminish quality quite a bit.

Those colors are a lot of fun.

Hyphaenation Mano Man you have one nice grow goi g on

Today is harvest day. There has been a few frosts already and the main thing is all the seeds are fully formed.

All in all I'm happy with things. Thete is good and there is the bad. Some of the bad with Satreeva was its airy runny buds. That is pretty common wirh Sativa and I think it was expanded by the fact that it was quite heavily seeded. On the good side for Satreeva is the fact there is a lot of that runny bud and it smells really awesome. On the up side is the fact the seed is all finished (and there is lots of them).

In previous years I always grew sensi and it was predictible in its pattern of fattening up. This seeded bud is very different. It is very crystally but not as fat as usual due to having seeds in calyxs instead of empty swollen ones.

In the future I will grow my sensi patch seperate and see these strains in their fat glory. All the Satreeva mixes will be interesting hybrids. Key amongst them for me is the crosses of the fat budders like Satreeva 1 and the 2 Grizzly crosses.i'm hoping these early budding fattys will thicken up the Satreeva and bring down its height a bit. The Satreeva on Satreeva classic will be cool to see planted early and in the ground , for massiveness and stability.

Also ... I think might have mentioned but,everything is for valing and or extracts. I don't smoke bud anymore for quite awhile. So the sparsness of some of the taller sativas is not a big issue.

That is some awesome sugar hyph !

For as unique as all the plants appear, I am now really looking forward to seeing how some of these crosses develop next year. When you get to the point with finished curing, I am anxious for your evaluations. It would be cool if you see a noticable difference in the type of high that corresponds with the plant forms and growth habits as well.

This grow was a pleasure to follow along with. Thank You.

As I cut each cola/branch I shook it vigorously over a tub to catch seeds.

I had been posting in the Show & Smell thread but I wanted to keep this related grow together with last years which the crosses came from. The goal was to create an early flowering Sativa-dominant strain that would finish in my short season climate and produce chunkier buds then the original Satreeva.

What I'm getting is really good phenos. Firstly there are no hermies and I have been vigorously checking daily for awhile. Both the #1 strain and the Lime Skunk are flowering well and started doing so really early. The Purple Grizzly looks good with lots of branches but is a fair bit behind the others for budding.

A bunch of the #1's are quite Sativa-looking and have tons of bud terminals. My favorite #1 is very Sativa looking and has fox-tails 4 or 5 feet long. Still lots of time to fill in and fatten up. The Lime Skunks have a lime-green hue to them and really have a buttery-skunk nose. They are budding good and have a more Indica look about them.  All the #1's have a red stripe along the leaf stem.

Below is random recent shots.

The summer has been a hot one and once again it has not rained for well over a month (6 to 7 weeks). I have been watering every day for many weeks. On a couple of occasions I waited 2 days and when I went to water everything was very wilty...a horrible sight. They always bounced back. A couple top-heavy plants fell over in wind storms. Now I am securing all the bags with weighted rocks and also pounding posts with various leveled  cross boards that have string tied to and bud-laden branches to stabilize.

I'm really happy about the crosses but especially about what i was referring to as #1 Satreeva . Its really fattening up into dense colas. Here's the mother plant where the #1 seed came from.and one of her daughters in a garbage barrel.

Here's a different #1 in a bag. Shaping up to have huge , long nugs.

This #1 bucks the trend by having lots of leaves , the buds are very thick already

We are absolutely socked in with smoke...so much so I'm concerned about the severely diminished sun of bud flowering. You look directly at the sun and nothing casts a shadow...so Eerie !

Forest fire smoke is still absolutely brutal. Raining today for first time in well over a month but its a pussy rain with no volume... praying for more to quench these fires. Still the plants are budding up thick...slowly. Maybe in some ways its better then the 100+F heatwaves we were getting back to back. A new problem arose when I discovered for the first time ever , heavy damage on one plant in the form of multiple brown dots on leaves , everywhere. Before I knew it it was spreading to other plants. Thought it was some weird disease until I shook a plant and dozens of small white moth-like buggers flew out from under the leaves. Turns out they are Whireflies...nasty buggers to say the least. They are sap-suckers who repeatedly attack leaves until they are fucked and then move on to the next.

I did some research and came up with a spray that is made of raw garlic blended to a puree mixed with organic tobacco dust , black pepper , shot of rubbing alcohol , squirt of dish soap , steeped and then strained and loaded into a spray bottle. I sprayed all the leaves I could above and under and tried where possible to avoid spraying any buds. Did them all although it was time consuming. I knew I was on to something when I started spraying and dozens of Whiteflys buggered off right away. Then next day I sprayed again and this time half the plats had a single whitefly scamper off and the other half had none.

Now its suppose to rain all day and over night and tomorrow I will re-apply the spray. The plants already look much better and most have little to no damage while the badly hit ones have stabilized. I think I'll go around and pluck all the really bad leaves as I read that what is worse is the fungal rot that comes with the holes they suck the sap out of.

I think what happened is with the months-long drought my well-watered plants were the only lush green fauna anywhere in the vicinity and were like magnets to the Whiteflies. Hoping this spray will continue to discourage them and the rains might help them move along to greener pastures.

The #1 in SCROG'd in the barrel is getting epic with cola girth!

The colas on that number #1 are bigger around than my thigh ! Solid pack as well.

This shot however is just beautiful ! 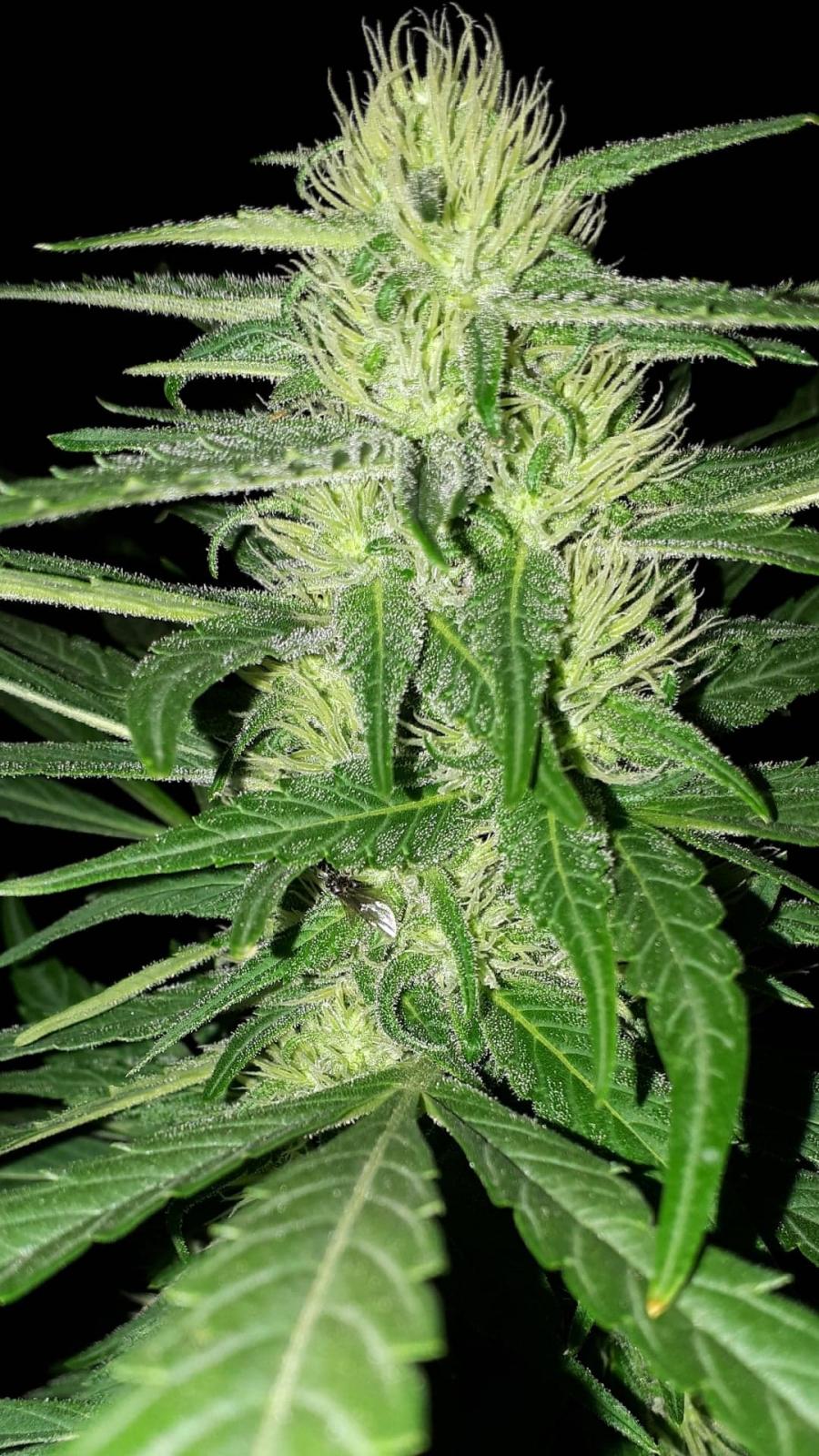 I love the the way the flaring resin rockets are filling in and fattening up ! The smell is pure candy gooeyness...