Religious views and why!

Being present doesn't make one stupid.   This experience is in the duality, with all its possibility.   The mind and body are expressions in the duality.   Everything they do is in awareness.   I can see awareness as other, or as what I am.   That is simply a choice of perspective.  Saying that an other's awareness is a separate thing from all awareness is but a guess, and a chosen perspective in mind.   Saying anything about awareness is not going to be what awareness would be.  Saying awareness takes place only in presence seems provable to me (as present awareness) because no one can present to me a past or future beyond concept.

Growing up, my parents were never really religious. They gave me the opportunity to go to church if I chose, but I had been once before when I was a young lad with my grandparents and to be frank; I couldn't imagine a worse way to spend a Sunday morning.

We had crucifixes around the house, partially for decoration I'm sure, but my mother grew up Protestant so she may have some residual faith from her childhood however in my eyes I always saw her as more Wiccan than anything else.

My pops never talked about his religious beliefs, so I really don't know what he believed in; if anything. He passed way last month from bile duct cancer - it ravaged him faster than we could have ever imagined, diagnosed and passed away in less than a year. Even on his deathbed, we didn't discuss afterlife, gods, or his thoughts about it. This leads me to believe he either was so doped up on morphine he couldn't link together thoughts long enough to hold a conversation, or he had nothing to say about it because there was no faith there.

I myself don't have much of a opinion on deities, growing up I always considered myself an Atheist - the thought of gods the same way I tink of fiction characters. I tried to believe in the christian god, I tried to have faith and pray; but I got the overwhelming feeling that it was all in vain. I wasn't doing it for myself, I wasn't doing it for anyone else either. Looking back, I couldn't tell you why I tried to worship, but I tried and it wasn't for me.

As I got older and had more life experiences, experimenting with psychedelics, and trying to expose myself to new thoughts.. I have denounced my former atheist ways and gravitated more toward considering myself Agnostic.

I have had some experiences that have made me firmly believe there is a higher power of some sort.

What that higher power is? Who is to say? God? Aliens? Multiple realities that converge on one point at the same time that fill you with such insight for a moment that it's overwhelming?

I think that's the point, trying to know. Finding what works, what does not, and self discovery.

That's how most religions start out. But over time the founder is usually turned into some sort of saint, or god themselves, and then a preisthood develops, ostensibly to "keep the knowledge pure", the "plebs" are told what to believe and just "accept" it, at the pain of some sort of hell...or in the worst cases (Christianity of a few hundred to a thousand years ago, or Islam today) actual physical hell.

Screw all that shit. Find out directly, yourself. Trust no man or book as revelation until it has been directly revealed to you.

Then keep it to yourself rather than try to make yet another religion. We don't need anymore of that.

"Any religion which considers life meaningless and full of misery, and teaches the hatred of life, is not a true religion. Religion is an art that shows how to enjoy life." ~Osho

Religion is a word.  It is subject to interpretation.  Neither word, nor an interpretation, will be what actually is currently happening.

Trust no man or book as revelation until it has been directly revealed to you.

This is the thing about the things we call religions, they get it backwards.   We see it when we're ready to see it.  We could look at it as this: we reveal it to ourselves.  Once what is is seen, as an experience of revelation, much in the books makes sense.   What the masters have been trying so long to tell us, comes clear.   The being of what is, always is.   We, as another thread says in its title, are blocked by belief and thought, as no thought will ever come up to what a thought or belief can only be about, and never truly be.  As it is not an it, but must be beyond an it.    We only truly understand by being, not by thinking or saying.

This will work.   A curious thing is, atheists can have an upper hand in grokking what is, as any version of the 'what is' that can be voiced, no matter how high an authority has set itself up as being, has not been accepted as "gospel."    There is no idea of what cannot be thought anyway, and the field is clear for experience.   The dogmatist is stuck with his/her own self imposed blind spot, if the dogma says it's this, but it happens that it's that.

Being open is a great blessing.   The religion of atheism is a dogma as well, but at its center it has a void, which might serve consciousness better than some envisioned icon of religion, when the ineffable experience of being is just too real to be ignored or dismissed.

Find out directly, yourself.

These four words pretty much encapsulate my theory on the whole thing.

Like it or not, the Bible is the most influential text in Western culture - ignore it at your own peril - that said, I can study the anatomy of the Hells' Angels (for example) and be fascinated by what they do, without believing in their values or fables.

God is within and without.  Anyone looking for deity in a book gets what they were looking for.

Atheism is a religion.

Abstinence is a sex position.

The earth is flat.

Atheism is a religion.

It can be in some cases.   The adherence to an idea that nothing exists outside the material realm is its expression at times, for some, to a dogmatic degree.  It is religious when someone says, "this is how it is."   I liked this bumper sticker I saw:

and YOU DON'T EITHER

Then abstinence is also a sex position and the earth remains flat.

Atheism may share some characteristics common to religions, without becoming a religion.

I share many characteristics with pigmies but aside from my mental abilities it would be inaccurate to confuse me with one.

It's just words.   Some of the worst religious fanatics to me are the skeptical debunker types.   The same with much that is mainstream that anyone "in their right minds" wouldn't doubt, especially if they have related degrees.    I sure know I have encountered atheists with much in the way of religious fervor, who would not surprise if they started a holy war.

It brings to mind, Jonathan Swift.   Which end should the egg be opened at?

Yes it is just words and I agree that some atheists are annoyingly dogmatic.

My point is that words have meanings, and when those meanings are altered in the pursuit of polemic points, it degrades the argument.

I am not a bird, not a goldfish, not a pony, not a pigmy, and not a theist, but none of that requires me to be religious.

To claim that atheism is a religion willfully distorts the meaning of the words.

I knew there was something about Alder's rhetoric that struck a chord ...

I flunked four years of English, and most academic classes.

I was only trying to point out that there are those who would religiously dismiss religion.   They do their religiously styled practices, but get to deny that it could be a religion, as they religiously put forward their authority for doing so.

James Randi comes to mind. If ever there was a fanatically religious atheist, it was he. Aynd Rand would be another.

But then you hear about people like Penn Jillette, who present a much more balanced position.

It would be hard to take anything following this statement seriously. "Just" implies a level of dismissal. In this context then, a dismissal of the meaning of the conversation. What's the point therefor in proceeding? 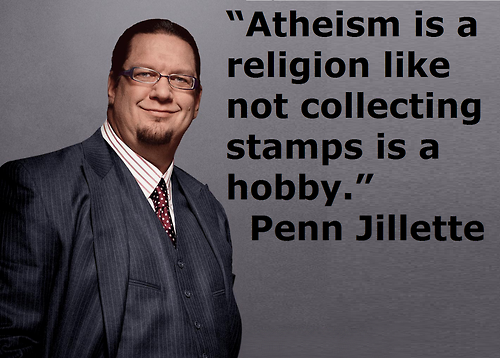 "Religion" infers some level of mysticism and belief in forces that cannot be proved by scientific means.

Not believing in something that can't be proven by scientific means isn't a religion so much as common sense (to me).

The whole point of religion = belief is the heart of atheism.

That said, it's tempting to confuse religion with a cult - and anyone who has seriously studied Ayn Rand and her organization (just one example) could easily argue that there are cultish aspects there.  The same can easily be said for rabid Trump supporters, who fervently deny objective reality in lieu of 'belief.'

Cult - Cult of Personality ... not religion, but ... something else.

something one believes in and follows devotedly; a point or matter of ethics or conscience: i.e., to make a religion of fighting prejudice.

When someone truly pushes orthodox science with a new paradigm, we have seen in the record book burnings and character assassinations.   It's happened enough times (see, "the Velikovsky Affair").

If this dumb hippie dropout's rational attack on the Universal Law of Gravitation is ever successful, and all of science which uses it as its basis is forced to retreat and rethink, it will be nothing less than a holy war.   Those who make those anomalous flying things that so many have seen must know something, because science says what they are seen to do can not be done, as Newton's laws of motion are drawn into question, unless thinking can be kept within bounds by the Penn Gillettes out there, guarding the boundaries of possibility.

The man with a new idea is a quack.... until the idea succeeds.

"something one believes in and follows devotedly; a point or matter of ethics or conscience: i.e., to make a religion of fighting prejudice."

Sort of like the religion of Jimmy Dore, eh?   '"something one believes in and follows devotedly"

So now Mycotopia has degenerated into just one more social media site pushing religion, thanks Hippie3, just what we needed.

I'm sorry you see it this way.