20 replies to this topic

I've been super interested to see whether honey can help freshies keep their potency---especially when it comes to the visual experience.  I read that I should put them in honey and let them sit at room temperature for weeks, pouring off any water that collects on the surface.  Apparently it takes a long time to finish and they might all get eaten before then, but as long as they stay nice and strong I don't care!
Here's just when I added the honey: 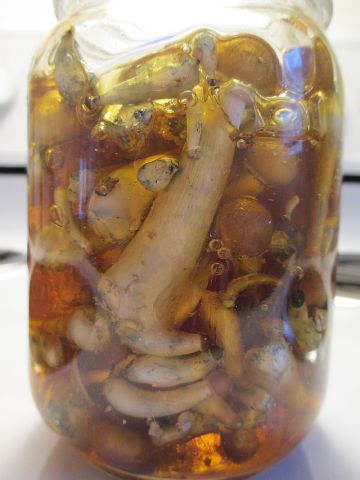 And on day one: 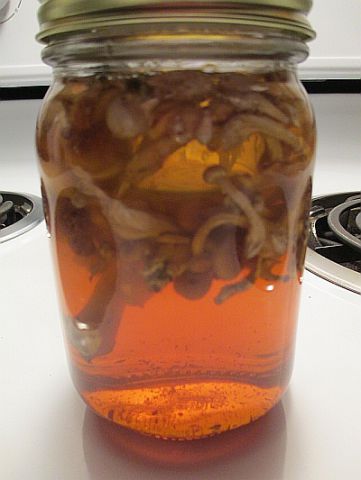 Whoa! That shrinkage after just one day has me mighty curious...

Yeah I felt like the jar was pretty full at first, but they seem to be shriveling up.  You can see their flesh wrinkling as though they were being dried.  I'm hoping the chemicals aren't breaking down as they would with air drying...

The other thing that is really noticeable is that they float.  I put a little empty spice container in the jar to hold them down.  You can see it in the second picture.

Interesting work! Do you have anything to update on?

Nothing has changed so far.  They still look just like they did in that second picture up there.  No water has formed on the surface of the honey yet.

Do you have a control group that are kept in a jar without honey? Even like one freshie put aside to see how long it lasts?

This is really neat!

Well, no, but if you leave a fresh mushroom out at room temperature it isn't going to last long!

I just pulled the jar out to check on it.  When I opened the lid, there was a release of air kind of like opening a soda bottle and then I saw bubbles rising through the honey.  There was a definite smell of fermentation and I was able to pour a little water off.  I didn't really see a layer of water though, probably because the mushrooms are all floating at the top of the jar.

Now I'm gun-shy about eating any of it because of the smell.  It's not strong but it is there.  Maybe I have to use something better to keep them fully submerged so I can see a layer of water and get rid of it?  I'm thinking coffee press type deal.

Did you drink the water you poured off ?

Pasted from an older thread  https://mycotopia.ne...398-blue-honey/

About Fermentation and Honey:

The main causes of honey spoilage are fermentation and heat. Fermentation is the production of ethyl alcohol and carbon dioxide by yeast as it grows and feeds on sugar. The ethyl alcohol may then break down into acetic acid (vinegar) and water in the presents of oxygen. The combined flavors of yeast, alcohol and acetic acid make the honey unpalatable. A number of physical changes also occur within the honey changing its physical characteristics as it ferments.

The yeasts responsible for fermentation are endemic throughout our environment. They are present in all honey that has not been pasteurized. The risk of fermentation is dependant on both the moisture content and yeast spore concentration within the honey and on the temperature at which the honey is stored. According to US agriculture handbook number 335 Beekeeping In The United States

"Honey with less than 17.1 percent water will not ferment in a year, irrespective of the yeast count. Between 17.1 and 18 percent moisture, honey with 1000 yeast spores or less per gram will be safe for a year. When moisture is between 18.1 and 19 percent, not more than 10 yeast spores per gram can be present for safe storage. Above 19 percent water, honey can be expected to ferment even with only one spore per gram of honey, a level so low as to be very rare."

"If honey has more than 17 percent moisture and contains a sufficient number of yeast spores, it will ferment. Such honey should be pasteurized, that is, heated sufficiently to kill such organisms."

Honey is extremely hygroscopic, that means that it will attract and hold water molecules from the surrounding environment. If it is left unsealed it will absorb moisture from the air and start to ferment at the top surface of the honey. This is not as easily identified as in crystallized honey so make sure you keep you honey jar sealed.

Any updates on this experiment? This is super interesting to me.

I moved on to other methods but a good method for storing fresh mushrooms in honey would be a huge win, especially if A) psilocin is preserved and B) the honey extracts the actives, allowing the mushrooms to be filtered out afterward.

I don't plan on having any freshies on hand any time soon but I will leave a few notes here:

1. The honey seemed to suck the moisture right out of the mushrooms when I tried this, which makes extraction seem likely--a good thing.

2. The problem that I had was fermentation.  The water rose to the top of the jar but there was never a layer that I saw that I could pour off.  The excess water has to be dealt with effectively.

3. The freshies floated at the top of the honey, making it harder to look for excess water.  Next time, I would use a french coffee press to push them down and make it easier to pour water off.

4. Yeast in the honey is the cause of the fermentation problem, so I would probably try to pasteurize the honey beforehand.

5. Common wisdom is to leave the honey outside of the fridge at room temp while waiting for the water to separate.  I wonder why, though.  Seems like it would be better just to leave it in the fridge.

While it would make the whole process a lot more tedious and involved, I'd guess that putting fresh fungi in honey and then putting the jar under high vacuum might prevent the fermentation problem by sucking out the water.

Conversely, the fermentation might not be a problem, it might be a solution! Magic Mead, anyone? That would be awesome, after thorough testing to ensure that it wasn't fermented with any pathogenic yeasts/molds, of course.

Over 20 yrs ago when i very first  logged on the internet , i discovered a primitive search engine .

i put it to work ,i was interested in brewing beer . and i came across a recipe called  Blue Mead !

Some hippy guy had posted how he made 5gl batches of magic mushroom mead  ..  !

i was fascinated and that led me to Erowid and a few other Early mushroom forums.

i wonder if that recipe is still floating around .

Over 20 yrs ago when i very first  logged on the internet , i discovered a primitive search engine .

i put it to work ,i was interested in brewing beer . and i came across a recipe called  Blue Mead !

Some hippy guy had posted how he made 5gl batches of magic mushroom mead  ..  !

i was fascinated and that led me to Erowid and a few other Early mushroom forums.

i wonder if that recipe is still floating around .

And I guess there's really nothing new under the Sun after all, lol.

My money is on that approach not working as claimed.

I've been wanting to brew mead, and if I ever get around to it I'll try some experiments along these lines. But that might be a while.

A few comments on the 'blue mead'. Just my opinion but here it is.

Their mix of 3 tblsp sugar to 8 oz water is 60 gm per liter! Optimal LC sugar concentration seems to be around 4 gm per liter. I would bet spores would neither germinate nor would myc proliferate in such a hyperosmolar solution.

Even in the best of conditions, the mycelial mass present in a really prolific LC is rather minuscule compared to the gravimetrics of freshies. Certainly there is less than a gram of myc in, say, 300cc of a really good LC. So, that might be 16 gm wet myc mass per gallon of optimal LC.  So we would be talking around 1 gm wet per cup of super LC and certainly less for the blue mead if any at all. Perhaps half to a quarter of a microdose in a cup of perfect LC. One would have to drink a liter of good LC just to get a microdose.

Blue is the color of the free, soon-to-be-inactive psilocin. I've never even seen blue in an LC. That would, I presume, mean a destructive and not an active growing process, just like mushrooms - they don't grow blue, rather they bruise blue.

Better to combine Stamets' "Blue Juice" with some mead or adult beverage of choice, I would say.

Comment on the freshies in honey. Yes, that would be the osmotic extraction of water from them that is happening. I would bet that it does not remove the magic, just the water as does air drying.

OTOH, how about cutting the carbs and preserving in olive oil as is done with various vegetables.  Keep in mind, however, that much of what I recall seeing in olive oil is partially dried, like tomatoes. I'm betting that totally fresh mushrooms in olive oil would still go bad, being full of water.

And the fermentation you saw with the honey is probably expected with the extra water that is accumulated in the honey (as described above). Bees have learned exactly how concentrated to make honey so that it does not ferment.

But, the fermentation won't hurt you. It would likely be a 'natural' yeast as that is what develops sour dough and is present in the atmosphere. It beats out other bacteria and is symbiotic with some harmless ones. It won't make much alcohol as does beer or wine yeast - maybe 1 or 2%.

So, I wonder if a good compromise would be partial drying and then storage in honey or oil.

The question being . . . How much drying and aging can you get away with before freshies just resemble the dried product in quality? I bet you could shoot for something like 66% reduction in wet weight to give you a stable product in honey or oil. Then try it after a while.

BTW, vacuum applied to the jar would not help. Fermentation is, by definition, an anaerobic process.  Put a vacuum on a jar or can full of yeast, water and sugar and it will eventually bulge with CO2. Jars prepared in a PC are essentially vacuum sealed as the high temp steam displaces all air and the self sealing lid then clamps down as pressure drops during cooling. Steam within condenses to water leaving no air, just water vapor with a pressure of around 20 mm Hg at room temp to push against the ambient 760 mm air pressure.

Sorry I know this is a bit old of a thread. Buttt.... Have you tried soaking in honey to allow shrinkage, then removal of mushrooms to drying rack to create honey candied mushrooms? Then you could reuse the rest of the honey after lowing water content. I'm wonder if that would work. I bet they would taste pretty good. As well as be about as potent as when you put them in since the are encapsulated in sugars.

It's an interesting thought.  I think that the water which is drawn out of the mushrooms and into the honey would contain a good bit of alkaloids, though.