Cooking up a batch of Golly's Stealthier Honey


40 replies to this topic

I've been wanting to try this recipe for a few months now.  I'm really interested in honey teks because of how low-key they are.  That and they taste better than a mouthful of dry mushrooms.  I basically did Golly's tek to the T with one small exception--I didn't reduce the mushy tea as far down as Golly did, hoping to end up with a final product that flows more like honey.  In his writeup, Golly ends up with something that resembles apple butter.

So this is the thread I worked from: Honey Extract Tek for Cubensis

Here are the ingredients.  I also added cinnamon, nutmeg, and ginger to the honey a la TVCasualty's honey tek. 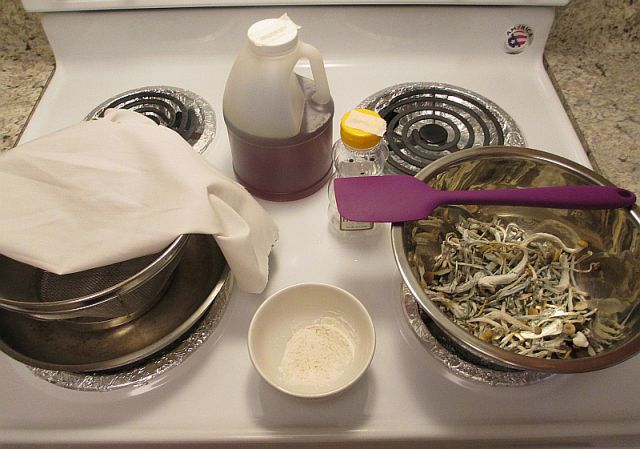 With this tek, you don't want to grind the mushrooms to a powder.  This makes it easier to strain the water out.  I crushed 40 grams of cracker dry Cubensis first by hand and then for just a second or two in the coffee grinder: 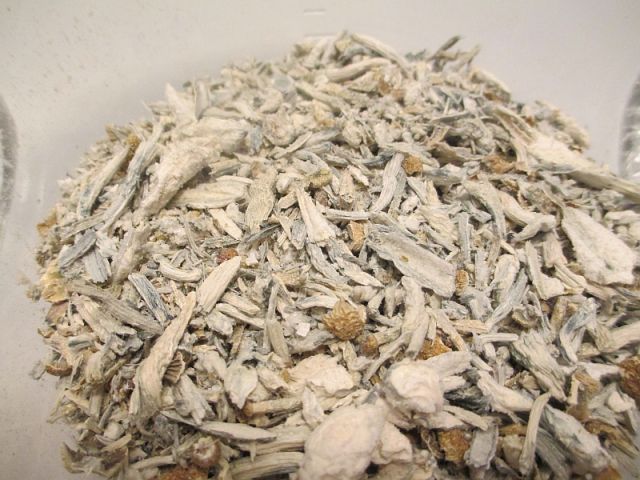 The fungus is in the sauce pot in the back, simmering for 25 minutes in a quart of filtered water with about a tablespoon of ascorbic acid (vitamin C powder, available in the vitamin aisle or health-food store).  In the front the honey is getting warmed up.  I put a washcloth in the pot so that the glass measuring cup isn't touching the pot.  I was using low heat to warm the honey but I figured it couldn't hurt. 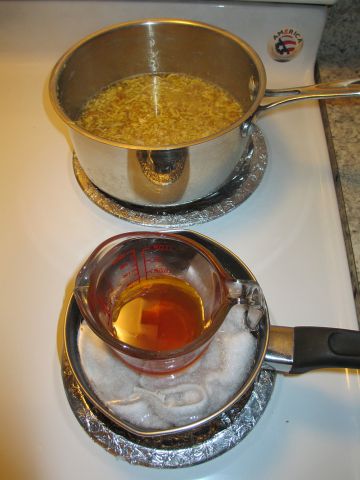 After it was done simmering I strained the mushy material through a square cut from an old dress shirt (makes for a better filter than a cotton t-shirt) and squeezed it well to get as much liquid as possible out.  Then I ran a half cup of cold water through it and squeezed it some more. 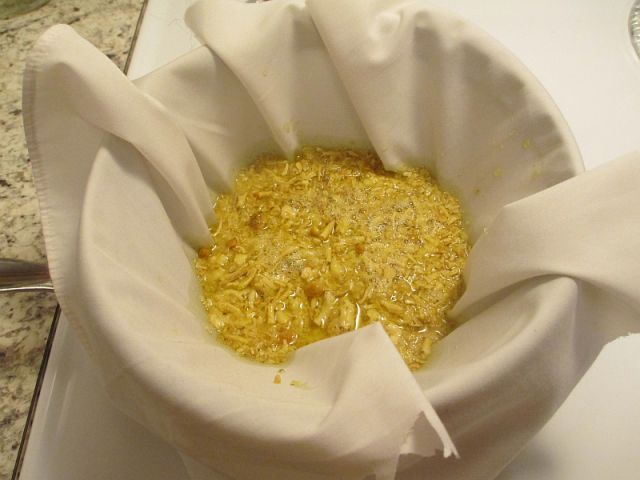 Here's a blurry pic of the tea being reduced.  It took about a half hour at medium-high heat, stirring constantly the entire time.  Like I said, I reduced it just to the point where it was starting to thicken.  By leaving it thinner, I'm hoping that the final product will flow like honey at room temp.  We'll see if it worked. 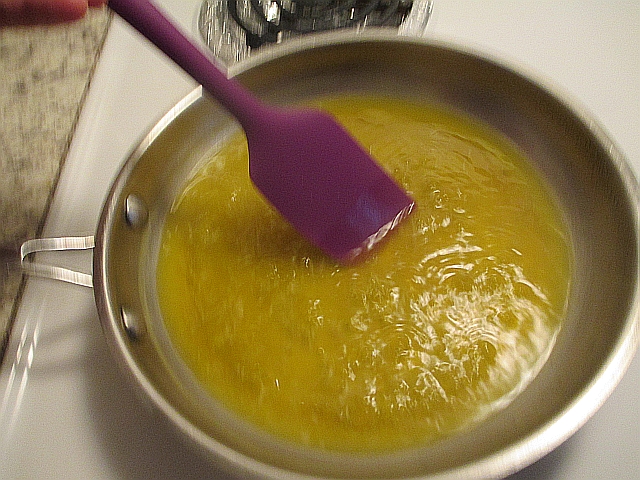 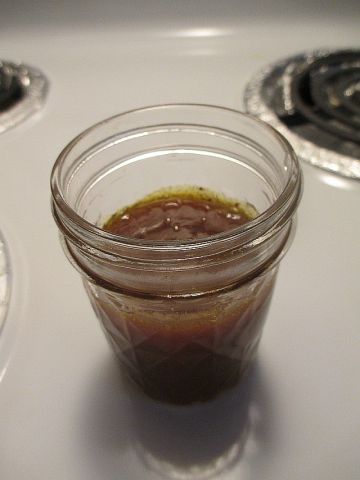 I'm donating this batch to the Salvation Army.

It turned out thin enough to keep in the fridge and still squeeze out of a honey bear into a spoon or a cup of tea.  Sweet!

I have been dying to make this as well, honey bear bottle so cute, thanks for posting pics xoxo

This worked out really well.  Less than a teaspoon makes for a nice buzzzzzzzzzzzzz.  The cinnamon, nutmeg, and ginger really do a lot for the flavor.  It's actually delicious!

I made a second batch, but I didn't use ascorbic acid this time.  Instead I soaked the ground up mushies in lemon juice for twenty minutes.  I used just enough lemon juice to wet the mushrooms a little.  I didn't want to use too much because I didn't want the honey to be sour.  I'm hoping to get some lemon tek effects by doing this.

I haven't tried more than a little dab but it sure tastes good!

I'm donating this batch to the Salvation Army.

How long did this stay good for? I would love to do this as soon as I can

I'm curious if the lemon soak batch turned out any different.

I'm curious if the lemon soak batch turned out any different.

Can't go wrong with golly tek, I chose this Tek in order to maximize the shelf life of the actives. Its been 5 years and the product is good, no loss in potency as far as I can tell . However I reduced the mushy tea as much as i could to remove all water to increase shelf life.

This tek is definitely a winner.  It tastes delicious and it's really potent.

I’ve never seen anyone do a tek like this with anything besides cubes,. Would love to hear if anyone has tried pans or mexicanae!

I have 5 lbs of peeled garlic fermenting in honey right now. I am defiantly going this route with my next batch of goodies. I so love honey medicine. I really like the idea of longer lasting potency too. It really bums me out to toss them down the disposal. Plus, this will make a couple friends nice birthday presents. Thanks for sharing!

Is that to make mead or something one,?

Ooooh, that make some righteous mead!

I have and endless supply of honey and cubes. Was just thinking of trying this. Thanks brotha!!! Much love.

Is that to make mead or something one,?

Nope, it is taken by the spoonful to build the immune system. Good medicine that really helps stave off colds and flu's.

I have 5 lbs of peeled garlic fermenting in honey right now. I am defiantly going this route with my next batch of goodies. I so love honey medicine. I really like the idea of longer lasting potency too. It really bums me out to toss them down the disposal. Plus, this will make a couple friends nice birthday presents. Thanks for sharing!

Brilliant with the garlic in honey!  This is on my priority list now.  Superior health benefits...but you are storing it.  Nice work as usual, One.

I wonder if anyone ever tried infusing mead with psilocybin?