I’m trying auto flowers this year and was wondering if anyone has any tips. Usually I grow outdoors in a remote location and have always transplanted after last frost.
I’ve read that auto flowers don’t like to be translated and am thinking about directly sowing the seeds in my prepared spot.

Pardon my ignorance, but: What's an auto flower?

As opposed to photoperiod. Autos don’t need 12 hours of light to flower. They’re completely finished about 11 weeks after germination.

With autos not requiring a a reduction in light to flower, wouldnt one benifit from providing longer light hours? I know it is at dark when plants complete some biological processes such as repairing itself for example but eventually the plant goes to sleep in a few hours. Now i know as humans are many of our biological processes dont stop when we sleep but i don't know about plants. Has anyone ever tried giving auto's 20'ish hours of light to increase yields?

I’ve read 20 hours is the perfect amount of time for them. I think that’s why indoor yields are higher than outdoor with autos.
I have one started that’s 5 weeks old under a crappy fluorescent light. It’s already flowering and do really well for such poor conditions. I was hoping to be able to put it outside but it’s still snowing : (

I gave my auto 20 hours of light the whole grow, I got a quarter pound off her in 60 days, start to finish....

I'm growing a Polar Express Auto and she is starting to flower. I had her under 400 watts mh light and thought that using a hps on 24 hours light for the red spectrum. Wondering if she might be fine under the metal halide for the duration of her flowering because I don't have a separate room or tent for just one plant. Ideally I'd like to have her under 400watts hps on an 18/6 light schedule.

it's worth the cash....It pays for itself the first grow...and with autos and flowering photo's, I leave on both spectrums....I get unbelievably dense nuggs from totally organic grows....like hydro dense....and I attribute it to this light....it has IR spectrum as well....

I could have fit 4 autos under this light and pulled probably a little less or possibly a pound....strain dependent of course.

I wish I had the funds for an LED. Always wanted to try it out with all the new technology maybe it's catching up. But I still am an hps kind of guy. I grow primarily in organic soil.

I wish I had the funds for an LED. Always wanted to try it out with all the new technology maybe it's catching up. But I still am an hps kind of guy. I grow primarily in organic soil.

I wish I seen these when i bought mine. Excellent price and i run 4 off brand 300 watt led or 150 true watts in a 2x4 tent with better then expected results.


Here are some of my flowers at the end of week 6 of bloom. Nothing crazy with the feeding just bloom bases and pk booster. They are by no means as good as the ones others are growing here but i also don't have the skill set either. This is only my second go at it. The strain is god grape. 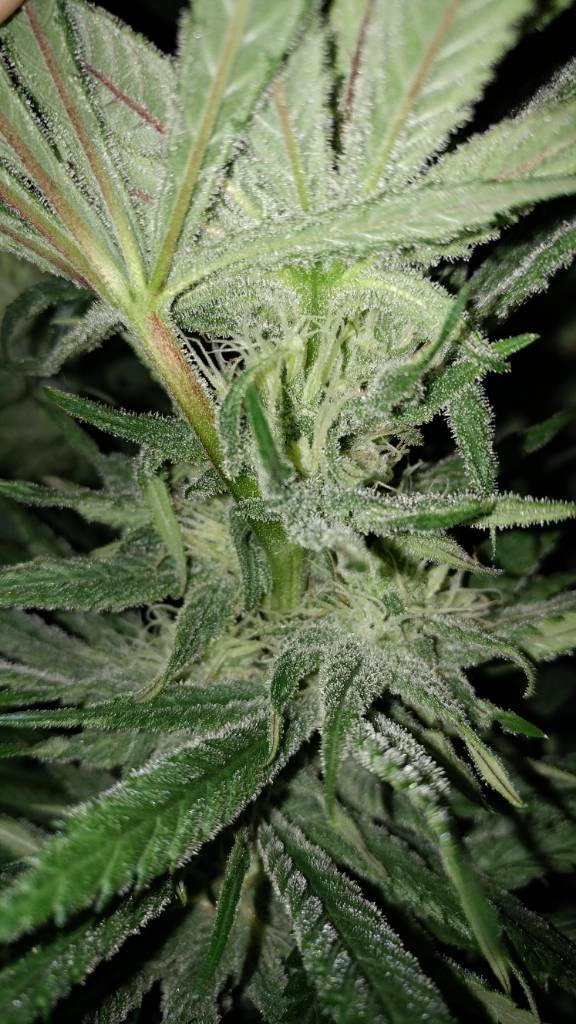 Just an fyi, autoflowering strains are basicly just mated with the Russian ruderalis which literally grows like weeds in harsh unfavorable enviroments, like Russia. Breeding ruderalis into pretty much any strain will give you the auto flower trait, or any autoflower male plant with a regular female pot plant. Also make for quick easy care, life cycle about 60-80 days from seed. Great for indoor grows, and first timers. I personally always keep a few autos going while vegging my larger plants.

I grew out a ton of em back in the day when I was test growing for Gypsy Nirvana. My overwhelming impression was that they all had the underlying flavor of rope from the Ruderalis.  A few I really liked were Early Pearl, Early Girl, Early Misty (That one in particular) and the original Low Rider  and Low Rider/afghani strain. Most of the rest and I went through about twenty of them, had a ropey flavor that I didn't like. If you live in a latitude that prevents growing outside, or need a Low growing strain for stealth, they are ok, and better than nothing. They will never win a bud of the month contest even if they are pretty looking. That being said there were some decent ones indeed, and for someone who needs those characteristics, they do pretty good. Not in any way degrading them nor insulting them, just giving my honest two cents worth after lots of tries. It seems to be hard to breed out that ropey flavor from the Ruderalis.

I grew an autoflower once alongside other cultivars. The seed was a "freebie" throw-in with some other seeds.

The plant was beautiful and grew wonderfully. A 12/12 scheme was used as this plant was just tossed in with the regular flowering gang.

Smoke: - At first, she had a lot of "pop" - you could feel the rush of the first hit quite well.

I really like Coopdog's description of the "ropey taste" of ruderalis. What's really funny is that I described the plant as "smelling like rope" while it was growing. I also notice that "ropey" taste from a crimea blue (blueberry x russian hashplant) - more russian genetics.

After the first experience with autoflower, I began to leave them alone after that.

Ive never noticed a ropey taste myself and i concider myself a bit of a pot snob, i enjoy taste. I can understand how it could inherit other traits other than auto flowering, but i have never noticed. I was given an ounce of some AK47 some time back, the plant hermed so the ounce was littered with seeds. Knowing they were autoflower, i raised a few crops of females. I found it very tasty, citrus flavor, with a pleasant aroma. I grew a few males to crossbreed with a few other feminized strains, haze, a bubba kusk, and a very stinky skunk strain. All have come out very tasty with no rope taste. I have found however, that cutting out all water additives 3 weeks prior to harvest gives a more pure taste in any strain. Not trying to change anybody opinion about autos, i just never noticed

I’ve always stayed away from them because I’ve heard of the poor quality and rope flavor. I was slacking last year and only had two plants instead of my usual 4 or 5.
So instead of waiting till October I figured I give some auto flowers a try. The one I have going right now is Skunk #2 w/ Lowryder #2. It’s about 7 weeks old and smells just like a skunk. Something better than nothing.

I’ve always stayed away from them because I’ve heard of the poor quality and rope flavor. I was slacking last year and only had two plants instead of my usual 4 or 5.
So instead of waiting till October I figured I give some auto flowers a try. The one I have going right now is Skunk #2 w/ Lowryder #2. It’s about 7 weeks old and smells just like a skunk. Something better than nothing.

I have grown nothing but autoflowers for the last three years, if you have good genetics they are great. I get very distinct flavors, Ultra Lemon Haze , Berry Ryder, Dream Berry, Diesel Berry, Bubble Gum and others, I've never gotten a rope flavor. As for yields, well, my regular plants only produced slightly more than their autoflowering cousins. It may have been true that the first of the autoflowers were not up to par, but thanks to some very diligent breeders we have some excellent producers with high THC content now.  Here's some from last run...nothing scrawny or timid about these darlings. :

Automatics are great for outdoors if you got an wet, cold and/or possibly early autumn... like where the ruderalis come from... and not only there... Last year I started mid april -outdoors- and they were ready at the end of june. Well so they were at the peak of their flowery with about 18 hours lightperiod. Massive buds, very strong and tasty. They were northern light automatic... I grew them the third time. And I planted throughout beginning in spring till august. The last plants I harvested at the end of october. They were purple and got a completely different taste than the earlier ones. Of course the harvest was the highest from the plants harvested in June. The ones in august were not much less. I planted them all in pots - like 30 liters. No problems with mold at all. And asuming the short period of growth there are no problems with ph-adjustion also if you are using the right substrate. Best greetings! outoforder

Finish in under 90 days.