The Human Body: A Miniature Universe


I think the people of Mycotopia forums will find this quote from Master Li Hongzhi (founder of Falun Dafa) from one of his Buddha Law Lectures very interesting:


"The human mind is complex. I’ve spoken with you before about how a person’s brain is merely a processing plant. A person is born from his mother’s womb, with his parents’ flesh and blood, and then grows by consuming earthly foods. And at death, whether he’s buried in the earth or cremated, he turns to dust. The brain itself, strictly speaking, is not the origin of one’s thoughts. Don’t people have a soul? Doesn’t a person’s body also consist of a part that is at various microscopic layers and that isn’t in the surface dimension? All of those can generate thoughts. Some people have said that the human body is a miniature universe. Think about how many cells are contained in a person’s brain. And how many molecules make up those cells?

And how many even more minuscule particles make up those molecules? Each minuscule particle, as positioned in space, looks as does a celestial body to the human eye. Everyone looks outwardly. Every planet in this greater universe has life on it, only it’s not in this surface dimension and thus it’s invisible to you. America’s space technology is said to be so advanced, yet when they land on other planets they see nothing there but a desolate world. But it is not desolate there; it’s just that man’s technology is too shallow. How many planets are there in this universe? The cells, molecules, and more minuscule particles in the human brain have the same arrangement as that of the universe that we see, and even the sequencing is the same. How many particles are there in your human body?

How many planets are there inside your brain? If the lives on those minuscule particles (that is, planets) were to look upon the particles spread throughout the space of the brain, would it be any different from how human beings look at planets or the universe? If you are to look at it this way, doesn’t a person’s brain contain a large universe? And how many beings, how many gods, and how many still greater beings exist there in those dimensions? Given that all of those countless beings have their own minds, where exactly do humans’ thoughts come from? It’s extraordinarily complex."


If anyone is interested I've left a link to Zhuan Falun ( the core book of Falun Dafa ). It talks about spiritual things from a scientific perspective. It talks about other dimensions, the soul, the cosmos in the microcosm and the macrocosm, supernatural abilities, karma, healing, the true history of mankind, transcending the 5 elements and leaving the 3 realms and many many other fascinating things:

Contaiined with the illusionn of self, is the realiity that we ar each one a city with untold quantities of bacteria and cells all working together to nourish and suppoet our "self".

Contaiined with the illusionn of self, is the realiity that we ar each one a city with untold quantities of bacteria and cells all working together to nourish and suppoet our "self".

Indeed spooner, and are ourselves inside a larger being? Check out this lecture excerpt from Master Li Hongzhi where he talks about this matter a little more:

"Just now I said that particles can form everything in a dimension. The cosmic bodies are extensive and flourishing. The more microscopic the particles that compose a world, the more beautiful and glorious the world. Actually, even larger particles can form even larger cosmic expanses or even larger lives. While these planets appear to us human beings to be pretty far from one another, they seem quite close to one another in the eyes of larger beings; it’s much the same way human beings perceive the distances among molecules.

Then could what human beings see between planets be part of a being’s body? In other words, could it make up an even larger life?! It’s really the same idea. In the past it was said that there were giants and dwarves. Whether ordinary people say they existed or not doesn’t matter, I’m teaching in terms of principles. It’s just that times have changed. With history’s progression to this stage, it had to conform to the historical and cultural requirements of this time period. So that caused today’ s society to become how it is.

People no longer believe in what they can’t see or experience. And the more they disbelieve, the less they are allowed to know the truth. That’s because human beings have become foolish. And human beings’ disbelief was actually something arranged. I often say that human beings want to be in charge but they never, ever have been."

We are in fact individual eco systems. 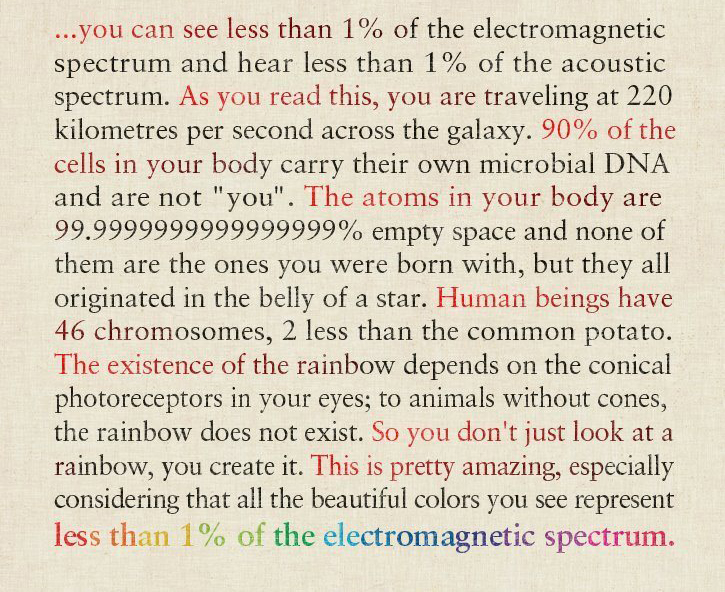 But if you sit on the couch long enough and watch enough TV sit-com's,,

you can pretend you are growing two more chromosomes,

as you try to become a couch potatoe.