Whatever the elite want, the elite get, and the elite really like having their Raytheon stock go up.

It Could happen here

Im putting this here as well in case anyone hasnt listened to this, please do!

It just keeps bouncing around in my head, so fascinating!

Reading between the lines (and there are only two), this is downright ominous:

Orders for U.S. durable goods — long-lasting items like sheet metal or motors — rose 2.4% in December, but 90% of that increase was from government defense purchases. Excluding that category, orders fell 2.5%.

FWIW, war has historically been a reliable stimulus of economic activity. It also cuts costs and boosts economic efficiency (and even helps mitigate climate change!) by culling a large number of Useless Eaters and their infernal carbon emissions. Granted, a pandemic will achieve most of those things too, but unlike war it does so without requiring the manufacturing of vast amounts of hardware that is then destroyed in accordance with its intended purpose so as to enable the manufacturing of yet more stuff.

Since pandemics are generally nowhere near as profitable as war, the currently-emerging pandemic might force the next war to to be rescheduled to begin sooner than originally intended in order to blow up or shoot as much of the market with expensive munitions as possible before it simply drops dead without generating hardly any revenue at all, relatively speaking.

I heard a report yesterday that DoD was also buying up foodstuffs at a high rate, so if your food prices seem to be rising...

In looking for documentation of that story, I found this:

Jeff Bezos already had a $600 million contract with CIA, and now a billion with DoD.  I see this is two year old info, but when was it plastered all over the mainstream media so we would all see it?  It wasn't in the Washington Post, as far as I know.

This pertains as well:

I find it fascinating that everybody seems to laugh and implicitly agree with the following quote from the Hitchiker's Guide to the Galaxy:

The President's job - and if someone sufficiently vain and stupid is picked he won't realize this - is not to wield power, but to draw attention away from it.

But most of them don't act like it since they keep focusing on the goddamned President. But as The Rules for Rulers reminds us, "no man rules alone."

The idea that Trump is somehow thwarting the hawkish agenda of the Company and the MIC is pretty much what a lot of those Qanon "q drops" were trying to claim. I guess some folks think that if someone bad is being opposed then whomever is opposing them must be not-bad. But there is no reason why two (or more) evil and greedy fuckers can't be adversaries in a context where whomever wins is irrelevant as far as the rest of us are concerned because all parties involved are evil and self-serving, greedy fuckers.

Conflicts between people in such positions are analogous to being a critter with a broken leg watching a couple of jackals fighting over who gets to eat you. Or sheep wandering around in wolf country. I guess there's always the faint hope that the predators will end up destroying each other before its dinner time. 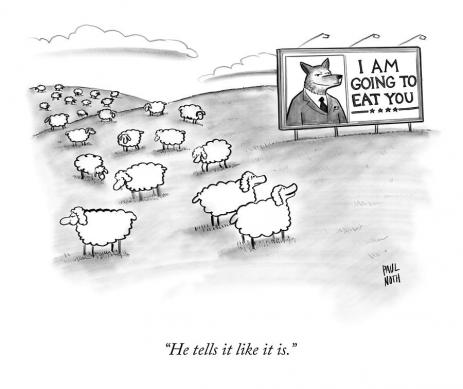 Though admittedly, sometimes a cigar is actually a cigar, that video I posted shows that a whistleblower is not necessarily always a whistleblower. There was not a whistleblower, it was an agent of the CIA doing his job, which was, as always, an operation of that actual power.

Suddenly, the Democratic Party establishment is ready to celebrate the Muelers and the Boltons, the FBI and the CIA, as good guys.

So now a butt-hurt Bolton will clear it all up.

It was a very interesting video; almost made me want to revisit Q and start thanking God for Trump. Almost.

The analogy to the quote from the Hitchhiker's Guide seems valid since the anti-Trump stridency is so high that few are noticing all that other stuff (all the details where the devils hide). It could be the case that Trump drew a bit too much attention away from power for power's liking (to the degree that it actually began to diminish power's power). That quote does not rule out the possibility that there may not be any kind of friendly or mutually-beneficial relationship between power and the distraction from power, so in a way I guess you could say that the MIC's apparently-extreme aversion to Trump means that Trump has been an overachiever as far as President's doing their actual job go.

That said, all that Trump's opposition to the MIC means is that (if Trump wins this fight) untold millions will be fucked by his social and environmental (i.e., domestic) policies rather than by bombs and missiles. We're still just the exploitable spoils of that fight. Well, if history is any guide then if Trump wins reelection and continues annoying the MIC then he could possibly end up being given the JFK treatment.

Anyway, when Iversen alluded to Eisenhower's warning about the military industrial complex she forgot to add that when Eisenhower said it, the original phrasing was "military industrial corporate complex" but I guess the "corporate" part was redundant. So is "complex," frankly. And we should probably swap "tumor" for "complex" since "unregulated growth" is a literal synonym for "cancer." Calling it the "military industrial tumor" may not be catchy, but it's very accurate.

It must be frustrating for the 'mongers from the MIC to look ahead to at least 4 more years of either Trump or a probably maybe similarly anti-war Democrat. But unless Chaos comes through big-time then it's looking like it's going to be 4 more years of Trump.

Speaking of Chaos, it must be real hard to live and operate in the spy/intelligence community paradigm where so many different narratives must be kept separate in your head so you don't get the stories of all your Psy Ops and your real ops and your domestic life all confused and mixed up. The father of my closest friend in college has been the only guy I've known who I knew for sure was a Company man (worked with CIA and MI6), and he was disturbingly weird. His wife was a typist from MI6 who always seemed to be on the cusp of a major nervous breakdown and had the same high level security clearance as he did, which is why they were married since her having a clearance made life easier for him (he was an old-school Harvard scholar who spoke 6 languages, could read Sanskrit, and just wasn't enamored with women as so many old Harvard CIA men weren't).

He was also Timothy Leary's roommate for a year when they were undergrads at Harvard, and was the first person to ever record William S. Burroughs reading his work waaay back in the day, which has never been released to the public and that I bootlegged when he let his son and I borrow it to listen to once with strict orders to return it within the hour and not copy it (I had my finger's crossed so it's cool that I bootlegged it). It was traveling with my friend and his Top Secret-cleared parents on a few occasions that enabled me to see all sorts of stuff that few believe when I relate the stories. A patriarch of a powerful family who struck me as the Jeffrey Epstein of that particular part of Europe patted me on the back as I left his house after a dinner party advising me "to go find some nice girls and do nasty things to them!" My friend and I just looked at each other with "holy shit let's get the hell out of here" expressions so we got out of there. Later that same night we got run over by a train, twice, but that's another story. Looking back, I believe I was part of his dad's cover. But I digress.

Bolton strikes me as a classic example of a high-functioning psychopath. I recognize the type since I've met a few like him who actually make shit happen in international politics (see last two paragraphs).

deleted due to not reading before posting

Actually, the way the speech writers had it was: "military-industrial-congressional complex."

I have happened across a few of Iversen's videos in the past and liked them.   I think she's pretty sharp.  Check out this where she looks into the MIC's current favorite boogieman: