Hello, everyone. Allow me to introduce myself...

When you decide to dunk, you can dunk them in the jars like you mentioned. Doesn't hurt to wait a bit on them. I always wait for pins on pf cakes. That one with the mushroom in it probably needs to come out in the next 48 hours. Its also ok to birth them all at that time.

Just use care when you rinse, you should have a firm solid lump of mycelium, loose Uncolonized verm rinsing off. If it crumbles in to firm solid pieces you can still save it. If it mushy soft and kind of dissolves rinsing, it was contaminated anyway.

And know, whatever else happens, this counts as success. You'll keep learning, hone your skills and methods and keep having success.

Yes, you can dunk them in the jars, just make sure to clean them before doing so. If there was bacteria, it's on the jar, too. So you want that gone...

In cases like this I really like outlining the edge of where the mycelium is with a fine sharpie marker which makes it much easier to gauge if there is growth or not over the course of a day or 2. If the mycelium passes the line its growing. I'd it doesn't, it's not.

That mush is so cool looking.

That mushroom is looking so albino. I'll be so jealous.

Oh man!!! You guys are all so awesome! Thanks so much!

Sorry for sounding desperate. As much as I wanna get them growing now, I don't wanna rush. I'll mark the jars and wait a couple more days, til Wednesday, at least. I just keep seeing the mushroom grow a little each day, and I don't wanna lose my first born lol

And know, whatever else happens, this counts as success. You'll keep learning, hone your skills and methods and keep having success.

Things are looking good O&M.  Really glad to see you getting results.

This place is so amazing! You all rock!!!

So I traced the mycelium with a marker last night, and checking on them this morning (because I can't seem to stop thinking about them), I didn't see any development.

I like the idea of waiting for pinning, jkdeth, but with the one cake already fruiting, I feel I need to get them out sooner, like you mentioned earlier about them probably already being colonized to the max.

I'm also concerned with leaving that mushroom in the jar for much longer... will it last much longer?

The plan is to wait until tomorrow morning, and see if any more myc growth has occurred. I figure that if they have stopped colonizing, or are doing so at a super slow rate, it might be wiser to get them out sooner rather than later.

If they fall to pieces, what would be the best way to save them, in the event that they aren't contaminated?

You'll see the cap opening and getting mushed against the glass as well as spores long before you have to worry about anything like rot, so another day or 2 wont do harm.

Checking the jars this morning, I see very little growth development past the lines I traced with a marker. Take a peek at this, tho:

There is some life in the top jar! I think today may be the day... don't want to rush things, tho...

What do you all think? I humbly ask for your opinions, o masters of the mush! :P (sorry... coffee is working lol)

I'll leave them in the jars for now, but I think today is the day I birth them. I would like your advice, fellow Mycotopiates!

I'd pick the big one, the veil had broken and it's not going to grow much more.

So does this mean.... it's birthing day?

Ok... I am about to birth the cakes. SO EXCITED AND NERVOUS!!!

When I post this, I will be preparing to rinse the cakes. Once they are rinsed, and the jars are washed thoroughly, I will place the cakes back in the jars and place said jars in a large container of water, upside down with the lid loose, so water can fill them. They will soak for the customary 24 hours, as outlined in Magic for the Masses.

In the event that the cakes do fall apart, does anyone have advice on how to work with it, barring it not being contaminated?

So we have some before pics:

And here is the after: 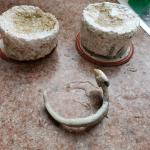 There are only 2 jars... one of the final 3 had 2 green spots on top, in the rice mix, so I didn't bother opening it. The other 2 were so easy to work with! After a few whacks, I managed to get them loose and into a light shower of cold water. A few scrubs later, they were done!

I have the cakes soaking in a cold bath, prepping for tomorrow and their moving into their new home. The big invitro shroom is in a couple paper towels in a sandwich bag and stored in the fridge for now, but that is only temporary. What should I do with it? I want to store it long term, until I am ready.

Thank you all for everything you have helped me with so far! I wouldn't have gotten this far without all your support! I dedicate this success to you all!!!

I'm planning to set up a camera to view the chamber as they grow, so I can do a time-lapse video! I'm hoping to post it here, if that's alright.

Back soon with updates!

I still have the invitro mushroom in the fridge... Can I dry it with my toaster oven, if I keep the heat to a minimum?

Throw your mushrooms in front of a fan and they should dry out for you...

I saw that was mentioned in the Masses pdf. I was just concerned that it may take too long, and I'd lose the mushroom. I worry too much :P

I turned a small plastic container on its side and placed a fan in front of it. The mushroom is lying in the container, getting aired out.

It will get pretty dry with a fan. Do you have Dollar tree stores there?

I throw mine on a piece of cardboard in  front of a fan if it's a just a few, I use my dehydrator for large amounts.

I'm gonna have to look into a dehydrator, I think...

And we do have Dollar Tree stores here in Ontario, jkdeth! We have other dollar stores, as well, but the local Dollar Tree is a couple of blocks away!