33 replies to this topic

Today marks the 2 week point on my PF TEK run of Golden Teacher. I have 10 half pint jars going, all of which have good levels of colonization. 6 of them colonized at all four injection sites, one of them only 2 so far.

I've noticed in pictures on here, as well as my own grow, that the bottom of the jar does not seem to grow mycelia, so I got to thinking about why that may be. Since I've got so many jars growing, I have room for some experimentation.

My first thought is that we put these nice little holes in the lid to facilitate air exchange and leave the jar standing upright. CO2 is heavier than air, so it stands to reason that the bottom of the jar would have a high CO2 content inhibiting mycelial growth. By way of simple experiment, I've decided to try inverting one jar (the one in the foreground of the attached photo) to see if that bottom area may get filled in. I can't imagine that nobody would have tried this before, but I haven't stumbled over such a discussion after a great deal of searching here. Since I'm only inverting this one jar, I will still have the other 9 to use as a control to compare if there is any significant difference. I'll update this in a couple of days. I'm probably about a week away from birthing the most advanced of the cakes, it will be interesting to see if this will be one of them.

The amount of fresh air is minimal at mycelium growth point, personally I think it has to do more with pressure equalization and the removal of gases produced by the myc growth, rather than osmotic respirations. Once you move to grain spawn, then exchange becomes more crucial just due to the medium. I have tried rotating them in case even gravity might be a factor, but have seen no difference.

That comes up all the. Its not gas exchange that causes it. Really no point in turning them upside down. Shouldn't hurt anything though, as long as the verm barrier was snug in the jar. In other words no empty space for the verm barrier to move about.

Drying is often brought up as a possible cause, and its not outside the realm of possibility.

A lot more likely to be bacterial contamination. A lot of jars that don't fully colonize, you can examine and see a thickening of the mycelium right at the edge of the uncolonized part. That means its recognized a contaminate and walled it off from the rest of the mycelium.

Those 1/2 pint tall(reg mouth) jars sometimes wont colonize all the way to the bottom, if they are stalled and you can't get them to restart, you can birth them if the part that is colonized has been long enough to be consolidated, just cut off the uncolonized portion with a clean blade.

Thank you for the responses. I'm particularly intrigued by the bacteria possibility that jkdeth brought up. The bottom edge of the mycelia certainly does appear more bold then the other edges, but since I inverted the jar, it has grown a bit further toward the bottom (now on top.)

I understand these tall jars are also less than ideal, it was all that I had when my spore syringe arrived and I wanted to get right into it. I'll certainly use Billcoz' suggestion about trimming off the unpopulated area once everything else is filled in.

That small bit that doesn't colonize isn't too much of a worry as long as the rest of the jar looks good. It will rinse right off under tap water, prior to your dunk. PF jars really don't need to be birthed til you see pins. Conversely, if you see pins there's also no need to wait for further colonization.

By way of follow up from this post, after 4 days of the jar being inverted, the mycelium has extended it's coverage by about a quarter of an inch. Most of the other jars, which were not inverted, exhibited approximately the same growth. So, it does not appear that turning the jar upside down makes any difference in this regard. At least it's good news that all of the jars are growing, in fact one of them has reached the bottom of the jar in a couple of points. I suspect that it will only be a few days until the most advanced couple of jars are ready to birth, although I'm hoping to hold off until after the weekend, as I'll be out of town for a few days.

It's time for a newbie "is this normal" question. I'm running with classic PF TEK on these, so the top half inch of the jar is covered with plain, dry vermiculite. Some of the jars are showing strands of mycelia growing up into that layer, while others are showing that layer acting like a barrier, I believe as intended. I've attached pictures of each situation, so hopefully one of you more experienced folks can tell me that everything is fine and just let it go. Alternatively, if I did something wrong to cause this, I would like to know as well. Any thoughts are welcome, please!

Normal for more aggressive mycelium or longer colonization times. The barrier function is to keep outside competitors from reaching the uncolonized nutritious substrate below the barrier.

Thank you JK, that's the answer I was hoping for!

Yeah that happens, the myc will try to colonize the verm layer, no worries there. Sometimes there will be pins trying to poke up through it.

Looks like I'm off and running now. Two of my cakes developed a few pins, so I have removed them from their jars, cleaned and soaked, and now in a fruiting chamber!

During the cleaning process, I removed a couple of pins and a bit of the attached mycelia and put it in some fresh substrate, just to see what would happen. One of those pins has doubled in size, so I have a slight possibly of developing an early sample shroom from this crop! Meanwhile, the other 8 jars still have mycelia spreading through them, so I'll just let them keep at it until they start showing pins also.

Cobweb mold or mycelium growth? If it's mold, can I H2O2 it? Thanks for any opinions and suggestions!

Definitely not Cobweb, other than that, just give it time.

Thank you JK, glad to hear it. Sorry for the upside down photo, I don't know why that happened in the post, the original is not.

Just for my own education, can you explain quickly why? Is cobweb looser and more hairy?

And its fast. And loose. Not compact mycelium. If you think you might have Cobweb, wait 24 hours and there'll be no doubt.

Cobweb mold, pic is from some 'Topia post from expired member, augustwest1- 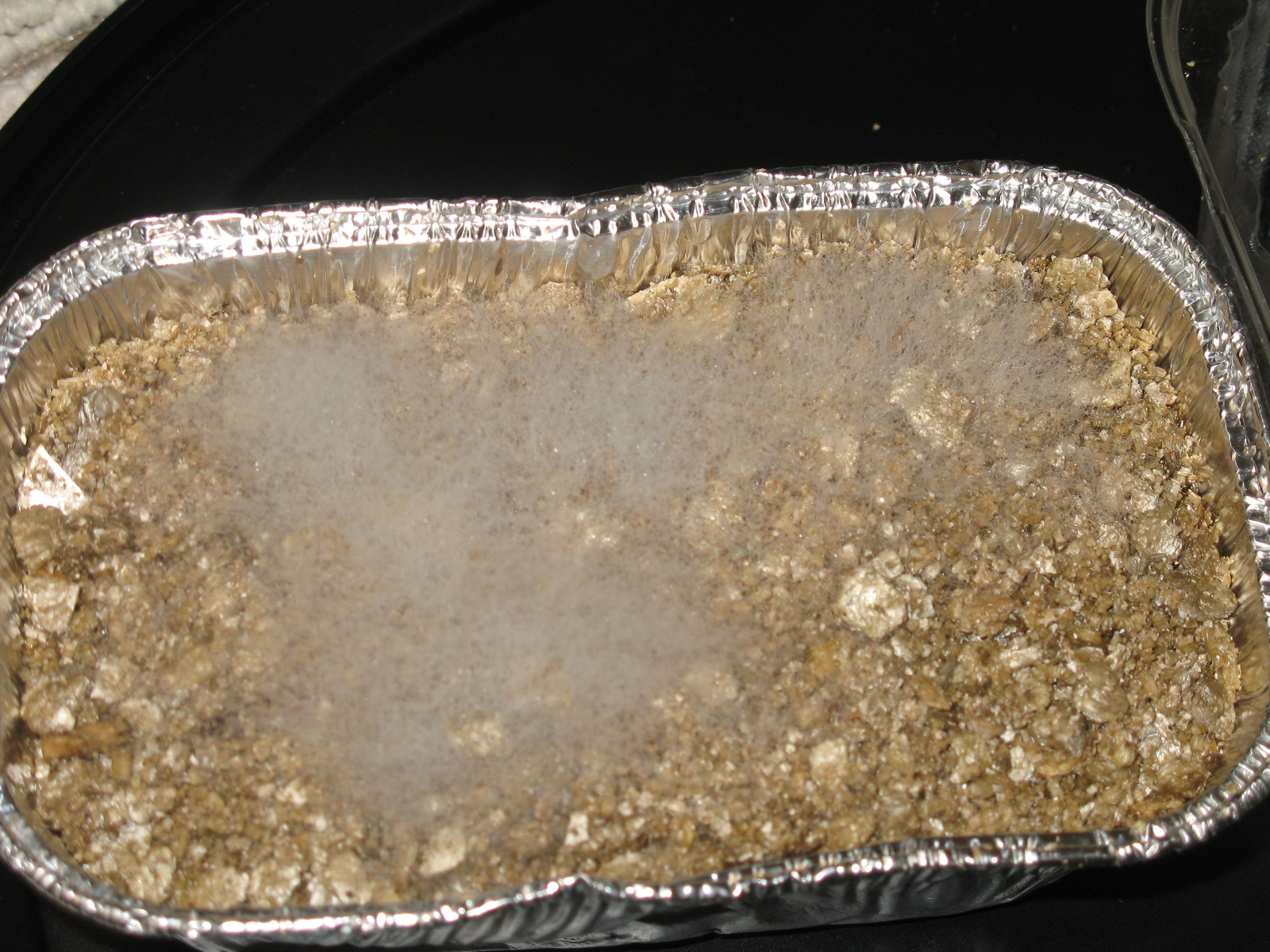 Yeah that happens, the myc will try to colonize the verm layer, no worries there. Sometimes there will be pins trying to poke up through it.

Yeah, that happened!  I just popped another cake out that had been showing a couple pins and the top had several, up to an inch long! I suspect this could be a prolific run!

Well, my first two cakes have a nice flush of pins developing on them now. There are a total of four cakes moved into the fruiting chamber now, with six more still colonizing. I think I'm going to take two of those cakes and use them as spawn in a bulk grow, per the Hongus tek  posted in the "shit you should know" thread, just to see how that works out. Even if that doesn't work out, at least I will have a small dubtub set up ready for my next grow.

Looks like I'm rapidly approaching a small harvest of a first flush on a cake! This was actually the third cake I moved to the fruiting chamber, it had about a half dozen pins in the top vermiculite section that survived the soak, so I left them to see what would happen. I must say, I'm glad I did that, because now it looks like I'll have some shrooms for the long weekend! The other cakes in the chamber have great pin density as well, but these cheats are so much further ahead!