yeah, neither have i. this tray is putting out a 3rd all abino flush.

If SWIM was going to start growing paneolus, how would I go about it? I'm assuming syringe -> grain -> substrate but what substrate, how h2o'd, are they better in monotub or some other arrangement, etc etc

Scott, many questions. All the answers are contained in this early on in this forum. Asura spells out a detained process when he initiated this forum, however I am learning there are more than one way to skin a cat so to speak. Most suggest going from spores to agar to grain to a horse poo/straw substrate. All successful growers, however emphasize that the key to success is selection of a white fluffy, fast growth on an agar plate.

Guys, can you take a look at this plate and suggest what the contamination is. I have seen this in the past, but on my latest effort, the majority (a few didn't) of my inoculated plates  show this. The virgin plates seem clean and I wrap all plates with Parafilm. This occurred on all the work I did that day including transfers and spores. This contamination prevents transfers from taking and spores from germinating. The agar was LME based with peptone and manure water. Some research I did indicated phages but this seems far fetched. 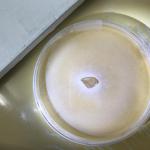 On the transferred diamond is a black mould, aspergillus or similar. I had a patch of my cieling that got wet and was a major source of spores for several years when it dried out.

The spores got into one pack of #10 blades I had, and for a week or so everything I touched turned black.

Try changing your 'bits'. Or PC them.

Scott, you did a much better job examining my photo than I did before I sent it. I am embarrassed and should have been more careful.

The diamond shaped transfer was made with manure water as was the agar it was transferred onto. Unfortunately I threw out the original dish but looked at a few I saved (to see what would happen).  I filtered most of the manure out but some particles got through as illustrated by the two additional photos I submit. I suspect that the black spots are manure particles but I cannot explain the "hair". I wouldn't have added this during the transfer or I should not be practicing this art!

I appreciate your comments Scott, but what I was referring to is the whiteish film that developed on the agar surface.

Is it powdery mildew on the first? The 2nd photo on the 2nd post was clearly not sterile (bacteria) but the first looks like normal mycellium. But then, Ive only just started growing Paneolus.

Guys, I am pleased as punch, that after 2 years of failures, I believe I have identified the cause of my issues fruiting P. cyans and have just managed to fruit a few trays of Wild Coast. My problem was that although my dishes had the classic white, fast and fuzzy growth and the grain jars colonized very well, I could get nothing past the bulk substrate stage. The substrate either colonized very slowly or not at all and never fruited. I also could no longer get cubes or gourmets to grow satisfactorily during this period whereas I was very successful in the past. The issue was that my dishes and subsequent jars had a pink hue. I know many of you have stated that if the color or odor if off, dump the material, Because everything else seemed so good, I downplayed the pink hue and meticulously changed every other variable.

The pink hue I now believe was due to the bacteria Serratia marcescens. The bacteria is very prevalent in the environment, however if it establishes colonies in your home, you are in deep trouble. I am not an expert, but I also believe it was responsible for the many jars that fermented on me - it is a fermenter of lactose. I can assure you we do not live in squalor but we did have a bathroom which was used very infrequently and the tub faucet had a small drip; perfect conditions for the development of S. marcescens colonies. A pink ring would develop around the water's edge in the toilet and although we used toilet cleaner to clean it, the ring reappeared a week or two later.

Colonies are difficult to get rid of so we did an intensive sanitization of all areas of the house dealing with water. We also followed this up with using bleach pellets in the toilet tanks and spraying the sinks with a 10% solution of bleach after every use. The pink ring has not reappeared. It was right after this cleaning that I started a new batch, after sanitizing my equipment as well, and have had a success.

I appreciate the help and encouragement I received from many of you during this time and specifically Asura and this forum he initiated. Without you guys, I wouldn't be writing this. Please refer to the attached picture - it wouldn't support a mobile phone, but it is a start!

Looks like things are slowing down here a bit. BTW, my first success with Pans after years of failure did well, many flushes/waves, and better after the first flush. I attribute this in part to using a syringe to irrigate casing when pins are present as discussed in this forum.

Hopefully someone can comment here. This is my first attempt of Mexican Goliath. The pictures are the first transfer from what looked like a dirty spore plate. One plate has three wedges and the two others have one wedge each. These look different from what I have used but can you comment. Do these look okay or should I start over.

Is that Mex Gal or Mexico goliath?

My understanding https://en.wikipedia...locybe_galindoi is that's not a pan based on labeling. Unless I've been thinking I've had a mex this whole time (they tiny prints either way LMAO)

Sorry, should have been more careful. Checked the print and it is Mexicana Gal (as in Galindoi). Thanks Rocky for the observation. Next question, do these colonies look healthy?

I'll plead the 5th. Ran them at the same time as pans and they looked similar but didn't fruit or stone.

Just swiped them again I'll post in the correct thread when they germ.

Okay, sorry again, didn't realize this fungi belonged in the Psilocybe genus (not Pans) . Will look forward to your comments Rocky.