Beautiful photos Basidia, looks like a great camp spot! Sounds like you had an incredible trip, how did your 40g and 30g friends handle it?

They handled it surprisingly well. There was only about 1 hour of silence which I think was the most intense part for them. I was hoping for an intense spiritual experience for them, but that didn't happen. They are above 6 ft tall and of different philosophies than me, which is why I think they didn't get as much depth than me from the experience. They've had cubes 3 times before @ 5 grams dry and complained about only getting slight visuals. They definitely got more visuals from this experience.

Aside from my sandose midget tray at least this central Florida tray is throwing pins nicely(for me anyway. I have to say I think my tub(modeled after JOC is a success. Since putting the tray in I’ve opened the lid only once to take this picture. It is 100% automated.

I have an LC and temperatures have dropped to the point that pans should be just on the upper end of their comfort zone at the height of the day.  I will be putting a few others to agar soon, but hopefully this culture and being able to use my fancy outdoor fruiting chamber is what it's going to take.  I'd really like to prove to myself that I can grow these guys for real!  Hopefully I'll see yall back here soon!

I have struggled long and hard with downfall after downfall. Best thing is just don’t give up. Everyone has something different that just works for them and there environment. I just hope I can see these guys through.

My try with Pans this year failed, the tray i have in FC is spreading contamination, I will toss it even if its pining on the sides. I think my pasterization skills sucks, so I will just stay with pan. cakes probably

When i spawned to tray i had some left over spawn so i tossed it in a monotub with untreated Hpoo (yep, no sterilization or pasterization) and its pining now, with some cobweb in the middle

Are this still safe to eat? first time i have this weird  "thing"

Can you tell me about your FC? how big are your square holes,filter, do you run a fogger?,. etc..

I need to make something like this for pans

It’s a 105 qt tub with a water resistant pc fan and fogger on a timer. Modeled just like JOC tek. The fogger comes on for 4mins and the fan kicks on for 1 min about the last 20 seconds of the fogger cycle. Both are on infinite cycle timers set to run every 10 mins. The squares are just like JOCs tubs and I used a big tub so I could run trays in it. I can run three Pyrex dishes at a time. I made another tub as well and got a bigger fogger.

I am going to run this one like a full mono I have huasteca colonizing in there now.

I put a small heater outside the tub about 5-6 feet away(not too close and not facing directly at it) you want the dry air to be able to drag across the sub from the filters.

The only difference between this set up and JOCs tub set up is the PC fan and fogger are seperate. He has his in one unit on different cycles.

Also in addiction to the 6500k strip light in the tub I added a 6500k grow light that sits on top of the tub. I’m starting to suspect that these things love light and the extra light might have contributed to the large cap size.

It’s a 105 qt tub with a water resistant pc fan and fogger on a timer. Modeled just like JOC tek. The fogger comes on for 4mins and the fan kicks on for 1 min about the last 20 seconds of the fogger cycle. Both are on infinite cycle timers set to run every 10 mins. The squares are just like JOCs tubs and I used a big tub so I could run trays in it. I can run three Pyrex dishes at a time. I made another tub as well and got a bigger fogger.

May I ask, what is the filter material that is used in the square patches on the side of the tub?

Also, I just built an automated FC similar to this, sort of a hybrid between JOC’s design and DonShadow’s. I have a fan on the lid...how much airflow is actually needed? When my fan runs, I can feel the air blowing out of the tub but its a very soft breeze...I know that’s a pretty subjective description of airflow LOL.

The filter is just called fan filter. You can find it at Home Depot near the fans and filters ironically they are in or near the same isle in all Home Depots. If you have the same tub design and your filters are big enough and in the right spots then you should get plenty of air flow through the filters as long as your not using too small of a fan. Mine is a 6in, got two for 20 on amazon and there water proof.

Celest, I have a similar system to your's (however not the end result yet). I am interested in your tek of turning on the fan at the tail end of the fogger cycle. I start mine with a 4 minute warm air purge, a wait for 6 minutes and then a fogger for 30 minutes. The cycle repeats indefinitely every 3 hours (limited by my electronic timers). My logic was to maximize the amount of time at high humidity followed by a fresh air purge that also causes evaporation at the sub's surface. What are your thoughts on what I am doing?

While I have your's and other's attention, I don't recall seeing instructions on covering the trays during colonization and/or consolidation. I was successful when growing cubes by covering the tray tightly with foil and punching, say 9 toothpick holes in a 9" X 9" tray. Is this the standard tek?

You do want to cover your trays during colonization. What I do is cover it with foil and take a sterile scalpel and make three slits long slits one in the center and two on the sides and then cover that with Micropore tape.
Don’t make the slits too big you just want them very thin you don’t want to much air to get in. Toothpick holes will also work I just feel like it’s less work to do the three skits and just three pieces of micropore than o bunch of tiny pieces.

I think your cycle with the fogger and fan sounds good. My tub is just focus mainly on evaporation but if the environment is just slightly dry the caps will crack which makes it a little more touchy. But as long as the outside of the tub stays the same so will the inside. That’s mostly what your wanting to dial in is how the outside environment effects the inside of your tubs.

2nd flush. Not as dense as 1st but still a good bit. How are some of you harvesting? I've been using bonsai snips, but I find bending them toward the base snaps them level with the casing. 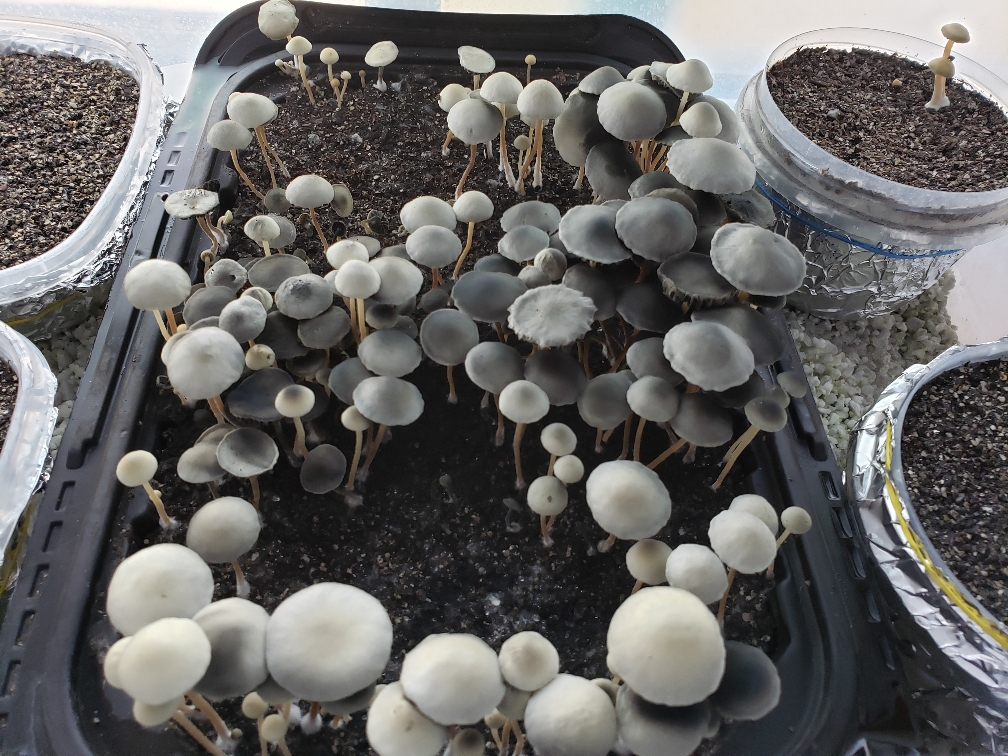 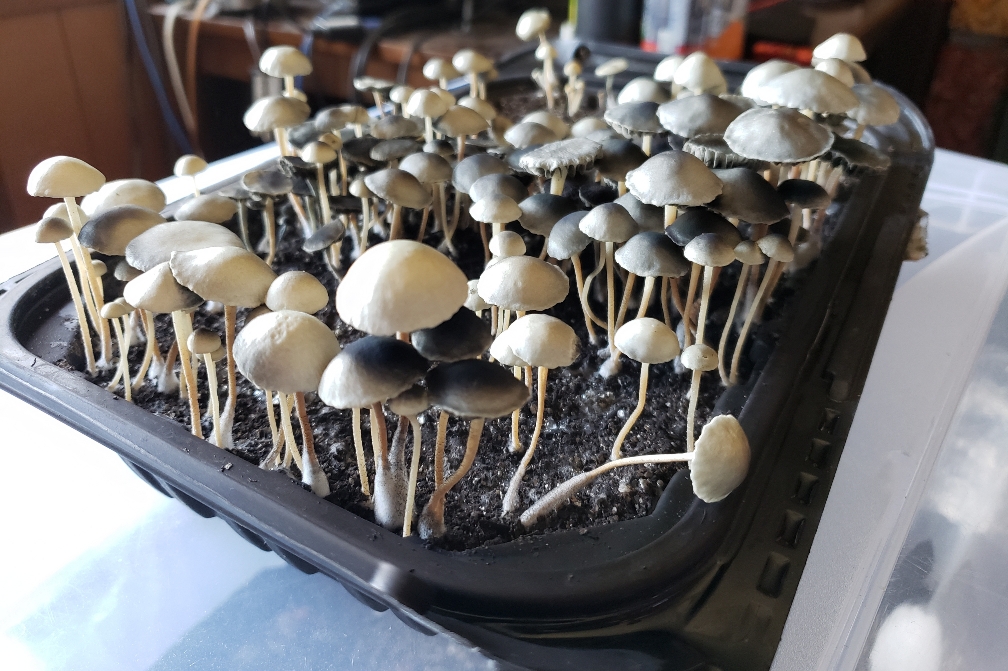 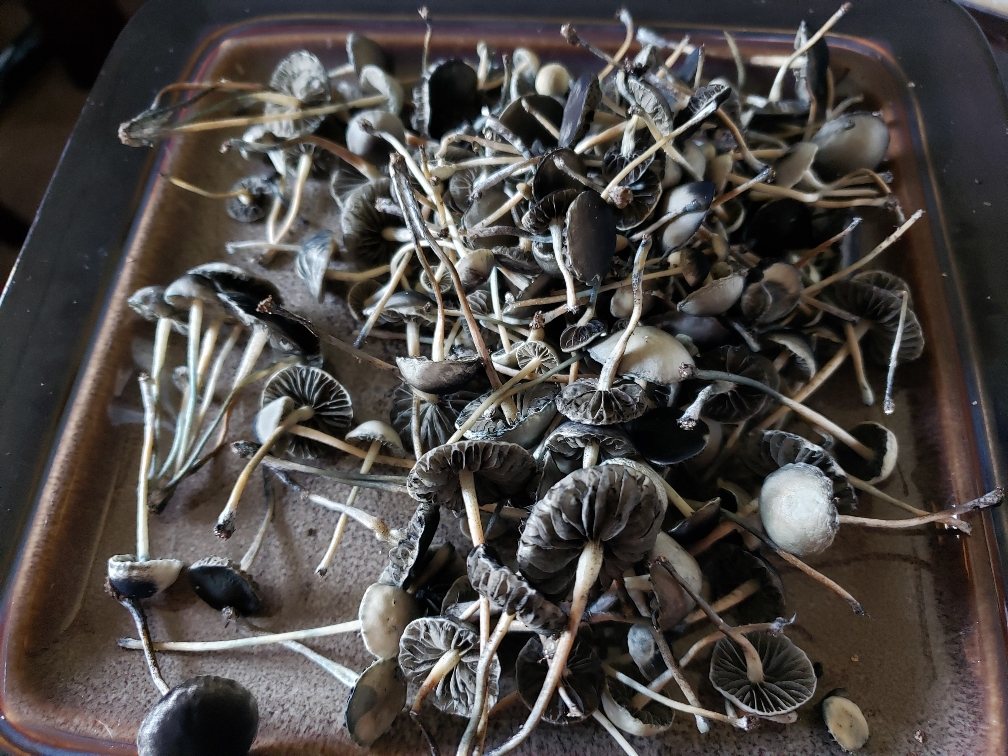 I use Japanese scissors (Chikamasa)...so maybe the same thing?

central florida second flush, destroyed the casing harvesting the first flush I wasn’t thinking I really need some of those scissors

Huasteca in the new tub put to fruiting. Let’s see what this thing can really do.

I like that fruiting chamber. Yall are both killing it nice work been a pleasure to look at the grows this year so many awesome projects going on in the community. Thanks for the knowledge from this thread I hope I can use it well.
Thx Asura for getting it going.