Here are some pictures of Psilocybe cubensis "Costa Rica" beginning to fruit on cakes made from shredded cardboard, whole wheat flour, and water in a 2:1:1 ratio by volume. This substrate is considerably more dense than PF Tek cakes, so colonization is slower. Wide mouth jars would be better for next time. These were inoculated with agar wedges - no isolation or selection was intentionally performed, just had to clean up a spore print - and used the neglect tek after that.

Those appear to be wide mouth jars for the type of jar they are. Others taper inward at top.

Are you doing them kind of invitro or opening the jars for fae?

I always have whole wheat flour and its good to see a vermiculite alternative.

I do wonder if it wouldn't hold enough moisture for birthed fruiting, but if nothing else this could be an easy way to get a clean fruiting body to clone.

These were a spur of the moment idea to fill up space in the pressure cooker, and I ran out of flour while mixing the substrate. So, most of these regular mouth half pint jars are not very full. I am using synthetic filter disc lids (on top of a normal lid with holes in it) for air exchange. I am trying the first flush in vitro, complete "neglect tek" - the jars are not opened between inoculation and the first harvest.

Here are pictures of the first flush from a jar with 1/2 cup volume of substrate. Fresh weight was 20g. The cap of the largest mushroom is damaged from pressing against the lid of the jar. I am dunking the cake now and will try for a second flush in a small terrarium. The other jars are not quite ready to harvest yet.

Wow! thats great. It appears that big one sucked all the energy it could form the substrate leaving the other to fight for scraps. Choice clone maybe :).

Love the neglect stuff, the less I mess the better the harvest many times. and just so easy... Good job..

Very cool! Thanks for sharing.

Second flush after a dunk: 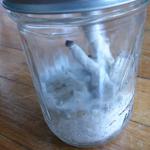 Here are some more first flushes:

and some second flushes:

These cakes do a lot better after a dunk.

Had some fungus gnats appear, so I'm wrapping this one up. Next time I'll replace some of the flour with a whole grain, maybe popcorn, to make the substrate less dense. Might try some larger cakes, too. This time around the smaller ones did the best.

Not quite the same but related. This is a first flush, neglect tek style, on a cake made of shredded newspaper and pureed kitchen waste (vegetable trimmings from cooking a few meals). I mixed them together and added water until the texture felt right. Didn't smell great while sterilizing, probably want the windows open.

This is a bigger cake. It was slow to colonize from an agar wedge. This flush was 85g fresh. I am dunking it and will see about getting a second flush. Could have probably let this go a while longer before picking it but whatever.

Here's the second flush of the cake in the last post, made from kitchen waste + newspaper. The bucket it's in is 1 gallon. This flush came to 133g fresh.

Here's a not very exciting first flush from a cake made of shredded newspaper, whole wheat flour, and popcorn in a 2:0.75:0.25 ratio by volume, with 1 part water by volume. This flush was only about 40g fresh. I'm surprised to find that the pureed vegetable trimmings did so well in comparison.

A third flush on another cake, with a funny weirdo (this cake has so far produced more than 1oz dry):

I've convinced myself that this is a usable substrate mix for Ps. cubensis. The only downside is that the smell when sterilizing isn't great. So, I'll wait to experiment with this more until the summer, when I can open the kitchen windows again...

I am particularly excited about incorporating this into a general household composting strategy. First, grow mushrooms on the household waste like this; second, compost the spent substrate with worms or hot composting; third, use the compost to grow plants or mushrooms. I just need to start doing humanure to close the loop

The only major non-waste input is the energy used to sterilize the substrate.

very cool. I love seeing alternate substrates. Especially because getting verm can be difficult in a lot of locations. How fine are you shredding that cardboard? and I assume you mix cardboard and flour then add water.

I am curious what sort of scraps are going into these? I assume its all veggie / fruit scraps.

Lastly when you say pureed I assume you are just tossing them in a blender or magic bullet type thing and blending the crap out of it..?

You said you are using a synth filter lid over the other lid with holes in it? Can you snap a pic of that I'm having a hard time picturing that.

lastly how are you cooking these? you say PC, what sort of time?

I'd be willing to bet you could get away with just boiling those cardboard and flour cakes, which would be cool b/c that would make this a very accessible "low tech" tek

I have an "AmazonBasics" 24 sheet cross cut paper shredder that I got used a while ago. The strips are around 1/4" x 1.5". There are always a bunch of super cheap paper shredders here on Craigslist. I've been shredding newspapers and brown cardboard, so these cakes were a mix (mostly cardboard for the earlier ones and newspaper for the more recent). I've been discarding the outer layers of cardboard boxes before shredding them since those seem to have some kind of waxy coating. Not sure if it's a problem.

Here are the two types of lids I was using for this. The mason jar one is a lid with a hole in it put on upside down, with a filter disc on top, and then the band over everything. The one for the plastic containers is a small filter disc glued over a hole with silicone adhesive. The hole shouldn't be too big, since the mix is prone to drying out.

The kitchen scraps were all vegetable trimmings. Don't remember exactly what they were, nothing weird though. I just put them in the blender and added water until it would blend.

I cooked the smaller cakes (the cardboard + flour ones I posted first) for 45 minutes at 15psi. The bigger ones with the kitchen waste I did for one hour at 15psi. I imagine you're right that it'd be fine with less!

The two challenges I ran into were keeping the mixes fluffy and making sure there was enough water so it won't get too dry. Bigger cakes might be more forgiving with this mix, actually. Some of the 1/2 pint and smaller were pretty dry.

I think there's nothing super special about these cakes. Seems to me that pretty much any mix will work as long as it's fluffy, has enough moisture, and is made of things that the mycelium can digest. Vermiculite + BRF is an easy way to get there, but I imagine a lot of stuff around the house would work just as well.