Kapn’ I think you are correct in your intuitions it appears to be being covered easily now by the myc,.

Buzz’ I’ve got “something” goin on that’s for sure,. I’ve fallen in love with this hobby from just this humble beginning,. I’m hooked,. But I don’t really have that much going on,. My LC I believe has germinated but has a bacteria problem it’s fighting because although there is what appears to be mycelium it is still particulate and the water is murkey,. I believe most LC begin with a little tam that is quickly dealt with or taken out by the said competitor,. I don’t think my jar should look the way it does by now,. You have plates going?! Holy shmowzow bway!! Lol that’s more than I can say I think,. I wanna start some home made agar dishes on Tuesday I believe,.


On another note guys my Rw just now were completely covered and beginning to thicken up I gave them one final shake and got it all really well distributed again I think they will be ready in two or maybe three days I’m so excited! Now,. This is where I need some help making a decision,. I have four single pound bags of pasteurized composted manure I got from out-grow,. And, I think because the SA is at least a week behind the RW I believe instead of doing 1:1 I’m going to 1:2 ratio spawn to sub and use all four bags compost with my two jars of RW,. I will source some new sub for my SA,.$To be completely honest I was even thinking this myc is so dang aggressive I could go 3:1 and use one of the jars of RW or half of one to do a g2g transfer,. Thing is, if I do that, I will still have SA coming,. Perhaps I should just do 1:2, have a bigger nicer first grow and take a couple clones to transfer to agar when I harvest,. That way I won’t have to much on my plate all at once, and a bigger more vigorous first harvest due to having more spawn to sub,. I’m just really tempted because I want more jars going NOW! DAMN IT! Lol jp but I would just wait a while longer and learn agar before G2G that seems more practical,. The more patient rational way to do it,.

I would keep the ratios kinda high your first go around. Wouldn't drop below 1(spawn):2(sub). The lower your spawn ratio the higher your chances of contam because it'll take longer to colonize. I personally spawn 1:4 but i kept it at 1:1 and 1:2 for a while to make sure I had my spawning technique down to a quick smooth process. Growing in bags does make this easier though so. You basically just dump the grains in the bag of sub, seal and shake. That leaves very little time exposed to open air. So you could try 1:3 if you're really trying to make your spawn stretch.
I would go ahead and just make some plates while you wait for the bag to colonize at 1:1 or 1:2 that way you can quickly get a clone going which will usually make everything more worth while(better yields)

Can I see a pic of the sub bags? I'd like to see how much extra space is in them. And are you planning to spawn to a bag or to a tub?

Kapn I been thinking about it, an I am definitely not going above 1:2,. Possibly 1:1, and I am going to use some cheap clear tuperware Little smaller than shoeboxes just bout at dollar store,. ;P haha I’m so cheap,. Gonna wipe me out with Lysol they look real clean so that’s a plus but yeah,. I got some glad bags for liner,. Was gonna put a sheet of aluminum foil taught over the Tupperware’s like a lid but with a couple tiny holes for GE ,. But now I think about it they are pretty small do the even need any gas exchange except maybe once every other day I could just put lids on instead and get the same performance

As of right now, this morning I put the two jars In a bag each and shook then closed it up and was considering letting the spawn run in them then breaking back up into the tub when ready but I don’t know,. Don’t think I will do that it’s not really advisable to mess with the routine of it all especially when inexperienced,. This was all done when this morning I wasn’t sure I would have time to get the tubs today

Alright,. All done one is in a small tote 1:1,. Another in bag 1:1,. So I still have two bags left for the SA,. This way I can compile more data on which I like better when the SA are ready ,. Is it super important that there are no grains on the top of my substrate?

I was never fond of SA. IMO there are better strains to work with.

RW aka Rusty Whyte. OK this is a new one to me. The name sounds like it would be a rust spore albino. Now if its from the Columbian Rust Spore strain then while being a lovely Cube its not going to be potent. No body load either though, which is a plus.

Oh I forgot to mention; if you are looking into using WBS then peep this:

Sounds like you have a solid plan going brother. Keep us updated.
Rustywhyte is a cross between CRS and AA+. They're often pretty potent and aggressive colonizers. I've also seen lots of MS canopies with that one

Yeah kapn is correct,. I chose SA because everywhere I read that it was quite a prolific fruiter,. And I read somewhere else it was very potent but then realized after I nocc’d up that I had been reading about PESA? Or maybe this is the same South American strain I have but the description was just all hype,. Anyway, the ratio of grain to sub was just so high I changed my mind and opened one more bag of compost and turned the one tray/tote into two and still got one bag I’m honestly tempted to turn the one mycobag of sub and grain mixed into two totes as well but I figure if I fuck anything up it’s gonna be the totes not the bag might as well keep one sure fire thing going,. Only problem is I’m trying to spread it all out in the bottom and it’s gotta be three inches tall of sub still would like a little less so as to not have any pooling or stagnation,. Hmm we will see,. I will still post pics tonight I just didn’t have the phone on me and wanted to be quick exposing everything to open air for too long,. Now,. These bags have been pre pasteurized probably two and a half weeks ago,. Would it be easy to assume they have grown a fair amount of beneficial microbial health and I shouldn’t contaminate very easily? It was really a great consistency in terms of moisture definitely on the dry side in very happy,. :)

Kapn I gotta really say thank you for helping me out and staying on top of my progress,. It’s been a lot of help and honestly it’s motivation knowing other people are interested and accessible 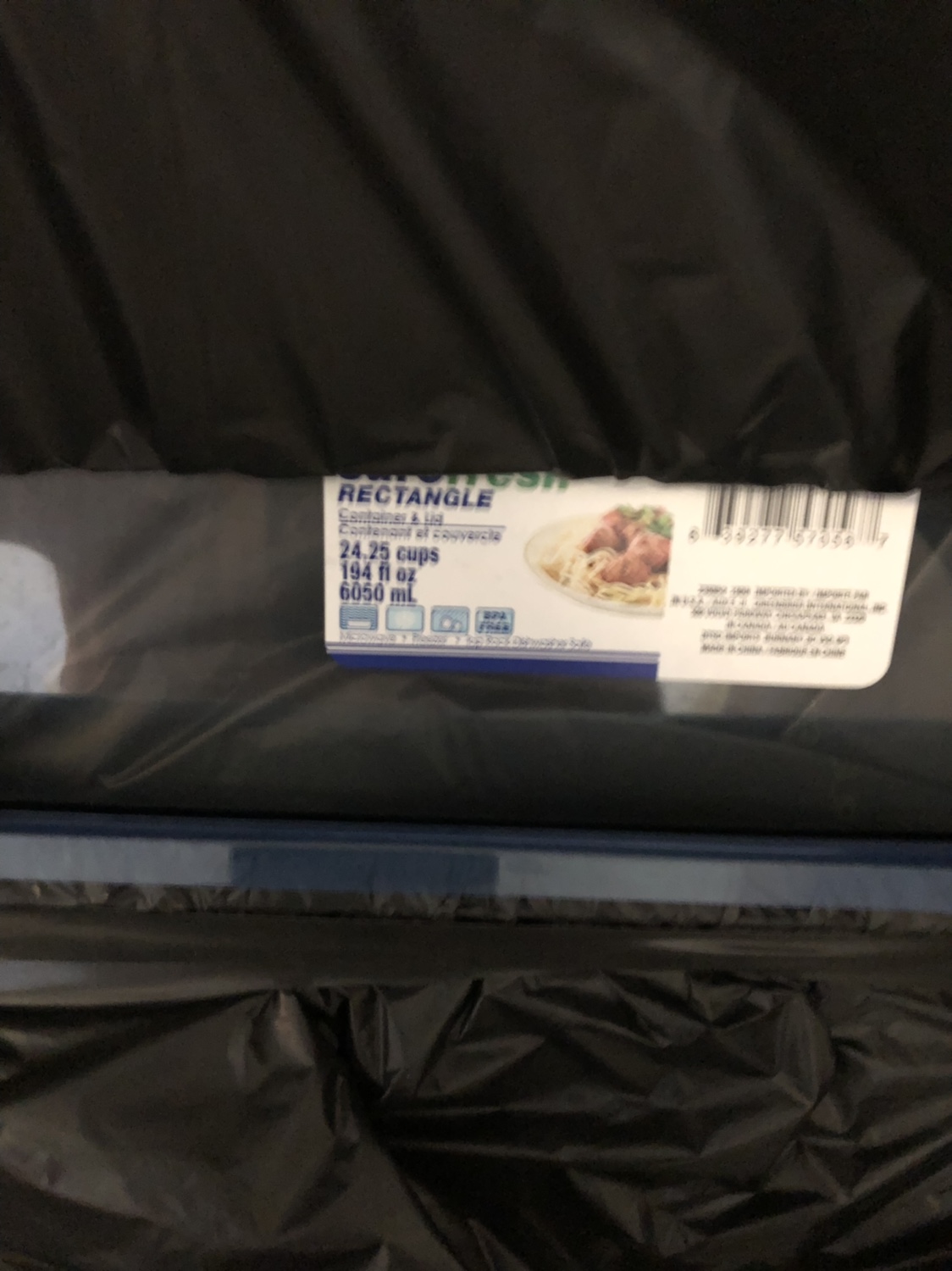 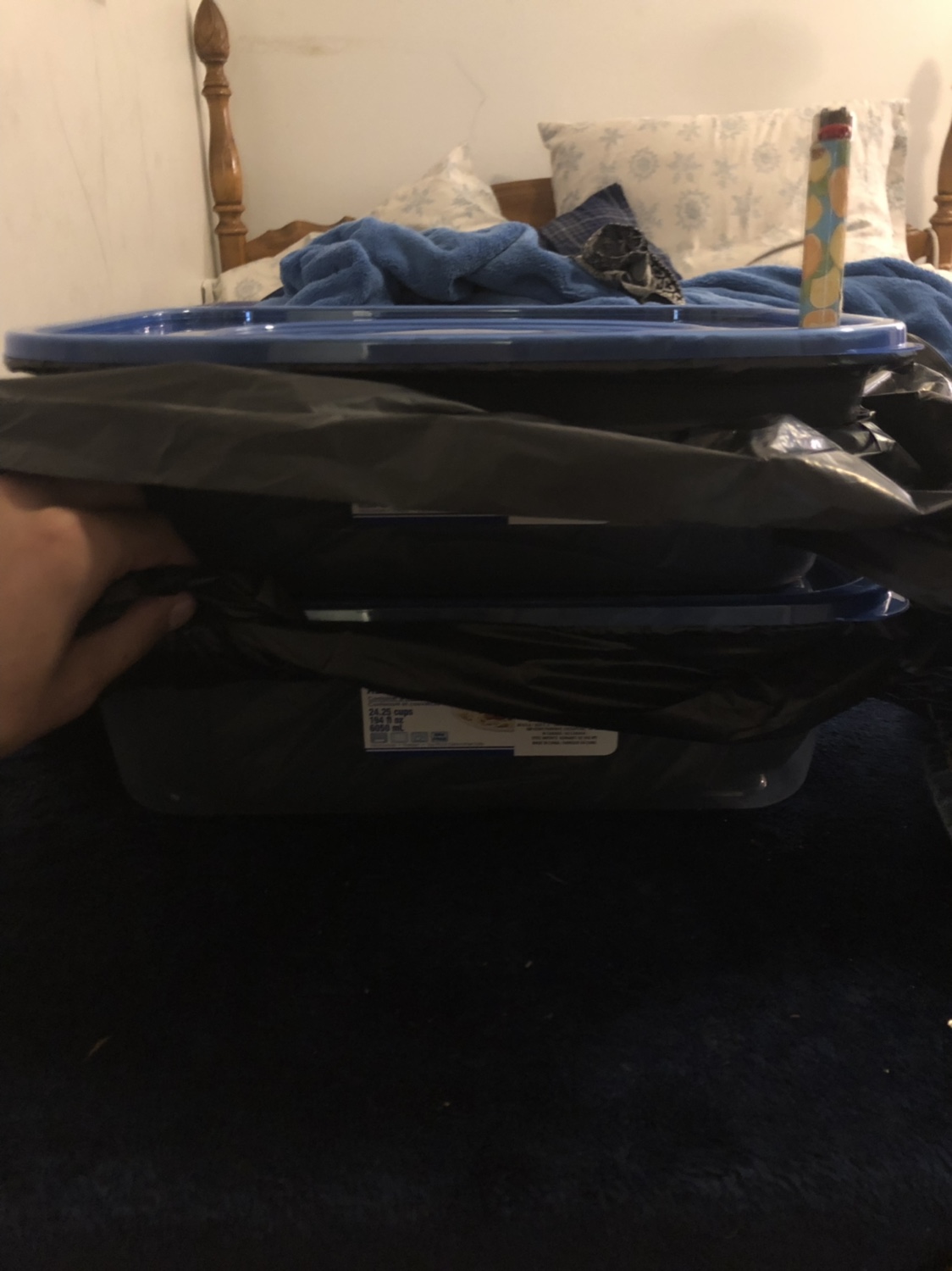 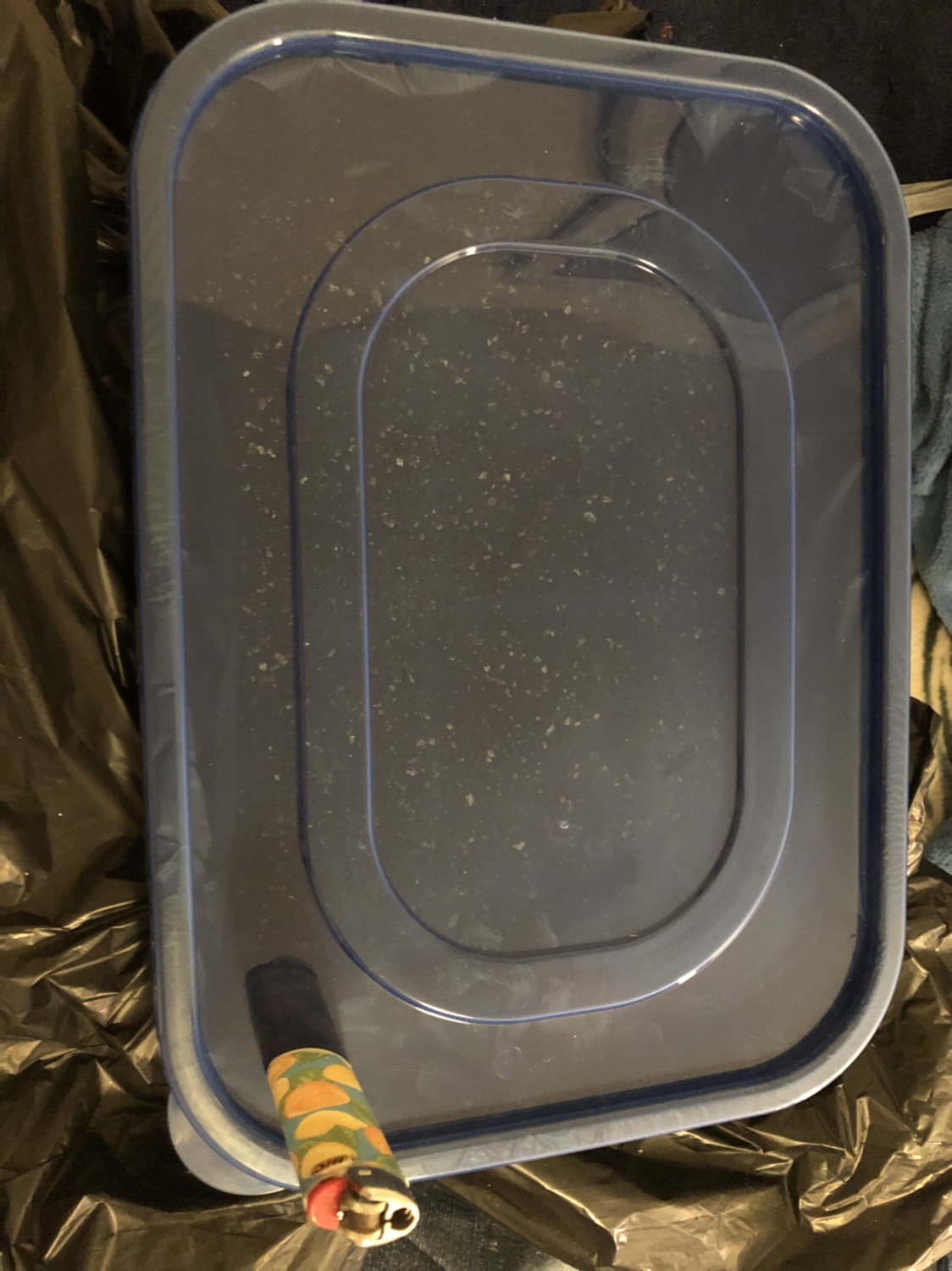 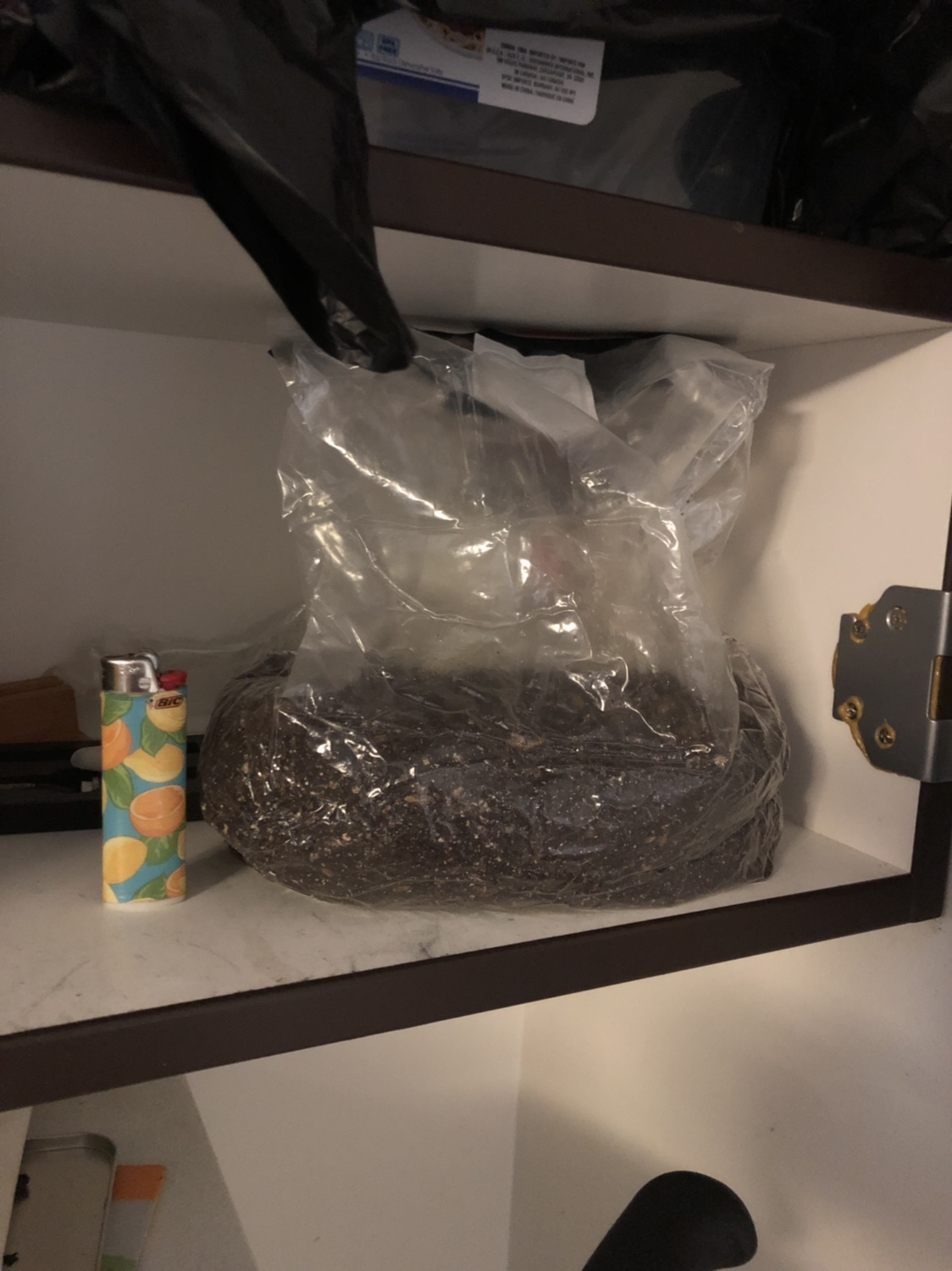 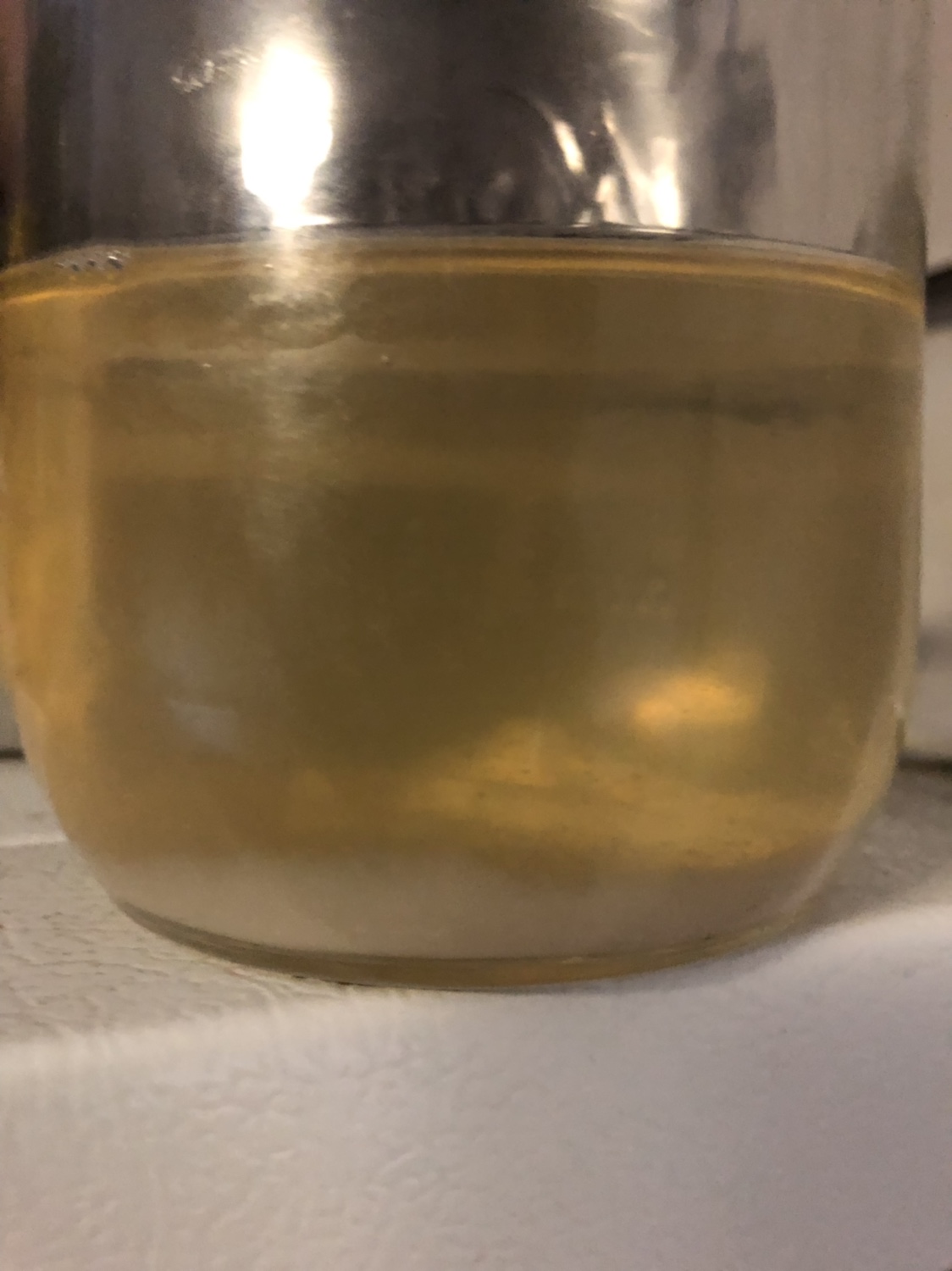 the LC cleared up and has solidified a bit 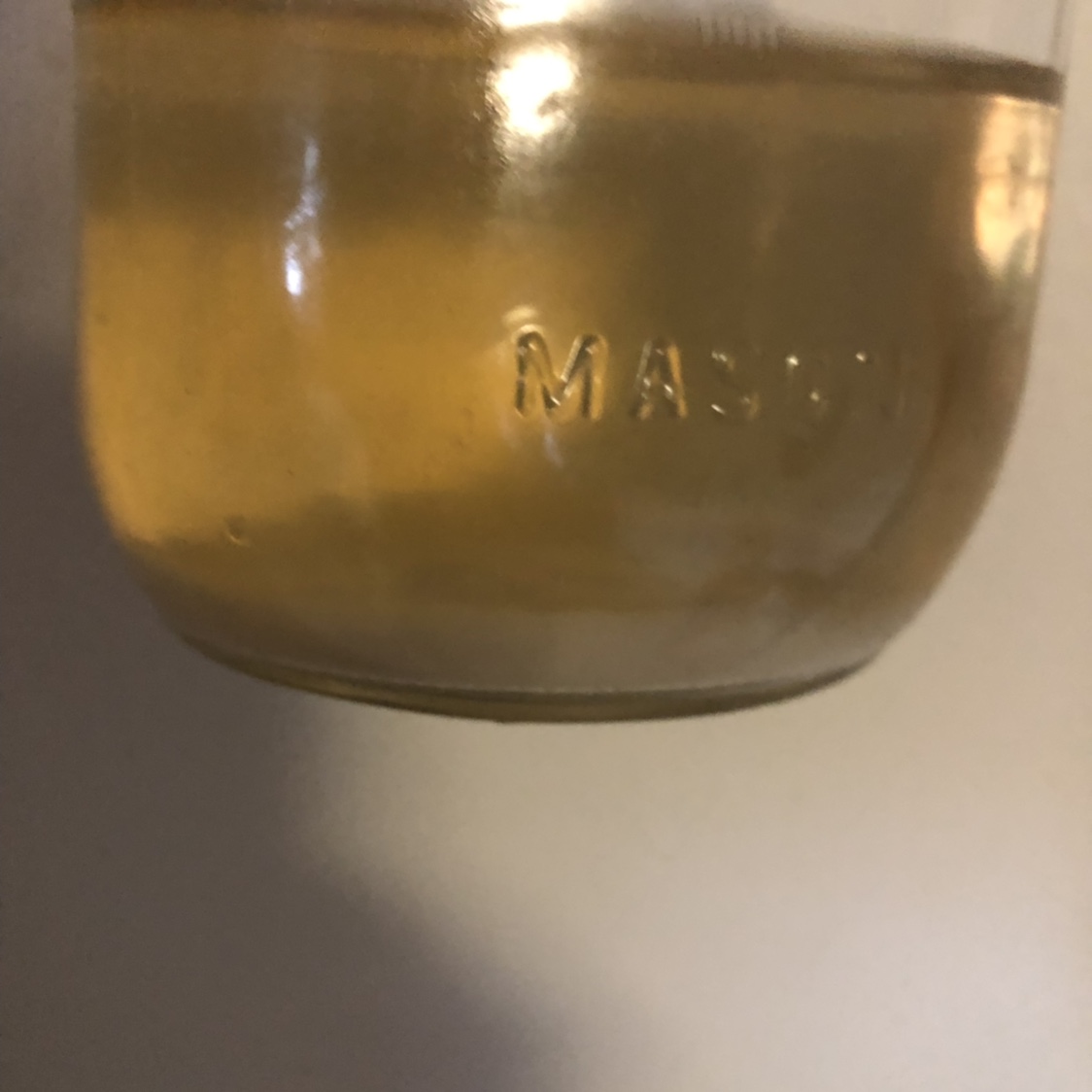 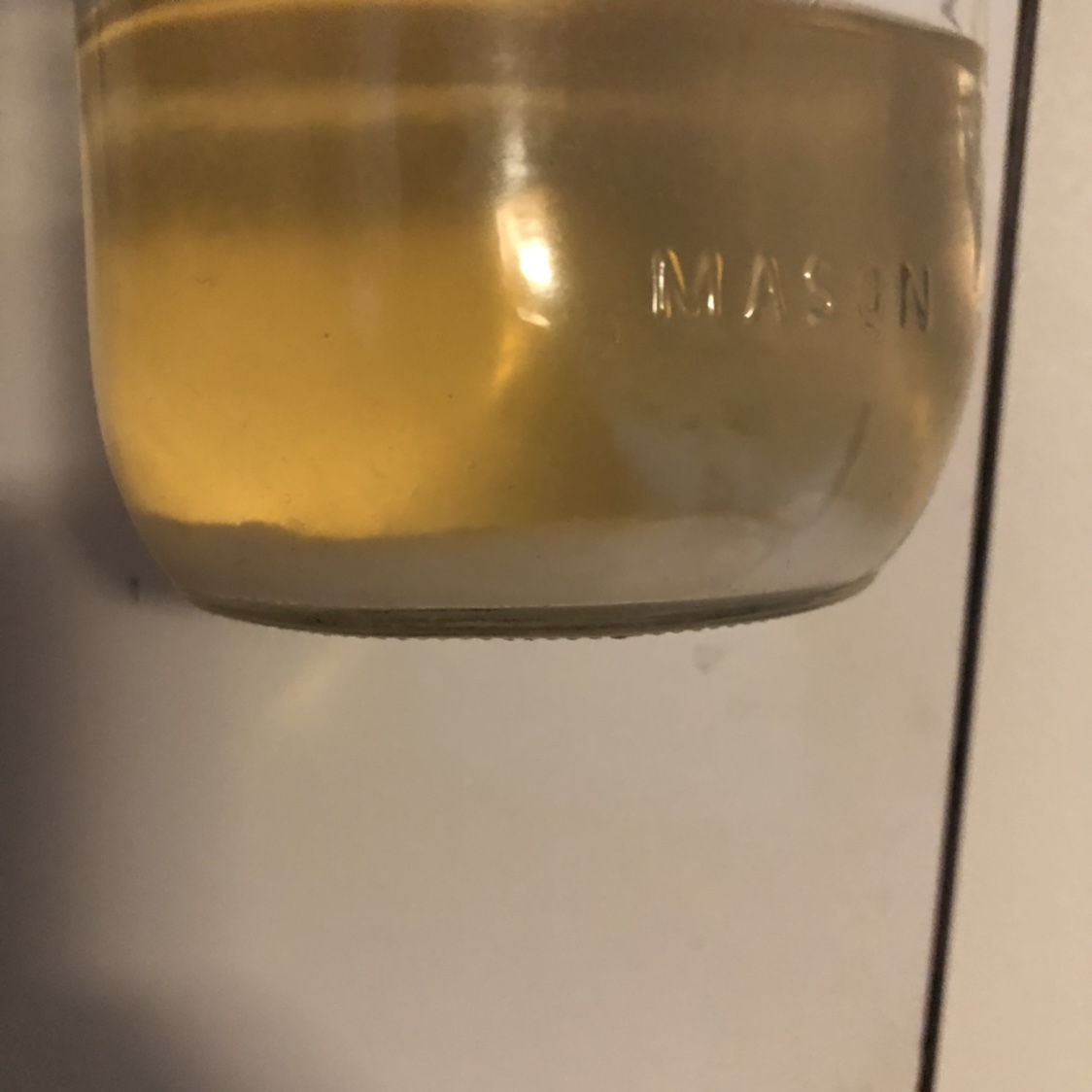 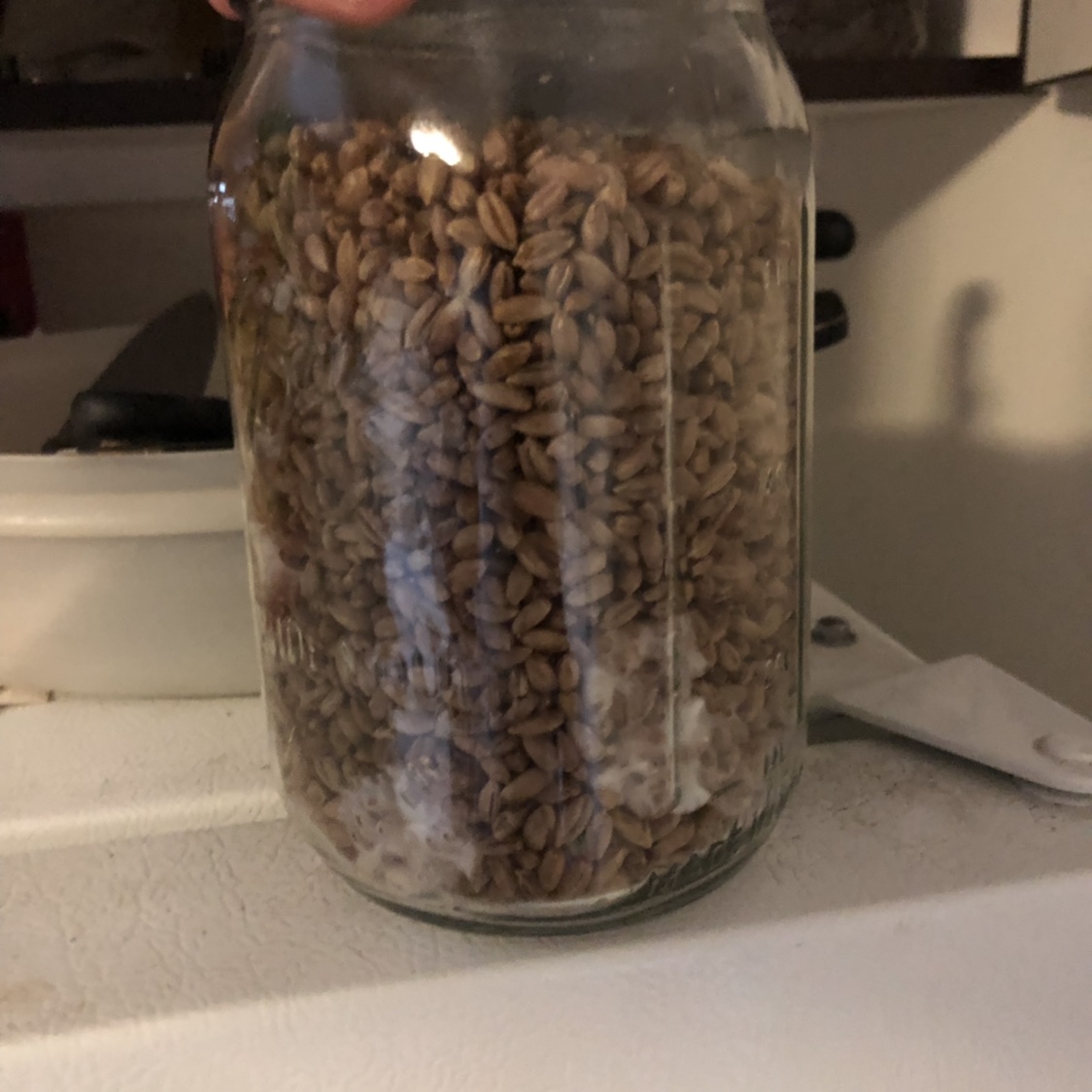 this is the SA other jar is similar

I just can’t get a good picture of that LC lol,.. I think it looks good I put very little nutes in it tho ,. And I think the fact that I don’t have a marble it just isn’t expanding properly it’s growing pretty slow I only shake it once a day and I stopped like two days ago just to see what happens,. Could I test it as is,. And does the gauge of the needle have to be larger than 18,. I don’t have an actual LC needle

Sounds like you have a solid plan going brother. Keep us updated.
Rustywhyte is a cross between CRS and AA+. They're often pretty potent and aggressive colonizers. I've also seen lots of MS canopies with that one

Yeah those Rusty Whyte are quite aggressive IME with them so far.

Buzz, what’s your progress looking like I’m bout to hop over there and look

Your welcome brother. Happy to help. You figured out most of it on your own though so don't forget to give yourself credit too lol.
As far as a pic of the LC putting a light behind it helps. I use 18 gauge needles for LC without problems but I also use a stirplate to break up the myc. Every now and then I'll get a little myc (usually on a piece of agar) stuck in the needle but it beats punching such large holes in the SHIPs on my jars IMHO.
I would definitely just fruit that bag invitro. That's a good sized bag for an invitro grow with that amount of sub in it.

Progress is going good. Just got off work so I'll be posting pics in a bit.

I’m a bit worried it’s to much sub for that size bag,. I guess will see how it goes I can always change it up as I see fit,. I’ve done my fair share of growing other things and extracting a lot more than anyone my age I know,. Figure I should be a good fit for the hobby :) I hope all goes well

Nah thats enough space. I've fruited bags of cubes that were way more full than that bag is. You'll still get some fae from the filter and when it's time to fruit you can just manually fan a few times a day. Hell I've even ran an aquarium air pump through a bag clamp into a rather full bag before(after 100% colonized of course) and it fruited beautifully although a bit cramped when they matured lol

Nah thats enough space. I've fruited bags of cubes that were way more full than that bag is. You'll still get some fae from the filter and when it's time to fruit you can just manually fan a few times a day. Hell I've even ran an aquarium air pump through a bag clamp into a rather full bag before(after 100% colonized of course) and it fruited beautifully although a bit cramped when they matured lol

Notice how tall the sub is? No worries