3-4 year old spores on standard PF cake of KSSS. Contemplating taking some tissue of this cluster to agar even though they are so tiny. Thinking that if I tried it on a substrate that would lend more moisture / nutrients would be

Same cake I posted yesterday fully opened sitting in the glovebox and ready for printing.

Hell yeah y'all are killing it. I've a couple more atl#7 tubs starting to put out some fat pins. I will post a pic later tonight

I wanted a trial run on my imagined agar technique, as well as an attempt at monokaryotic isolation, so 12 days ago I swiped two CDA agar plates with very dilute Marasmius oreades spore suspension. One plate is still blank, the other now shows nothing but two colonies of apparent mycelium. The second one is hiding at the top edge.

I'll find out if they're monokaryotic when they touch, I'm not saving any isolates because I very much doubt I could hybridize fairy rings with Pan cyans or cubes

These came from a monotub of a culture started from approx 6 month to 1 yrs. Old dried inner stem tissue from a buddies bag. The caps get this beautiful variegated look and some are half steril. Whatever variety it is, I love it! I've been calling it CUNK (culture unknown). 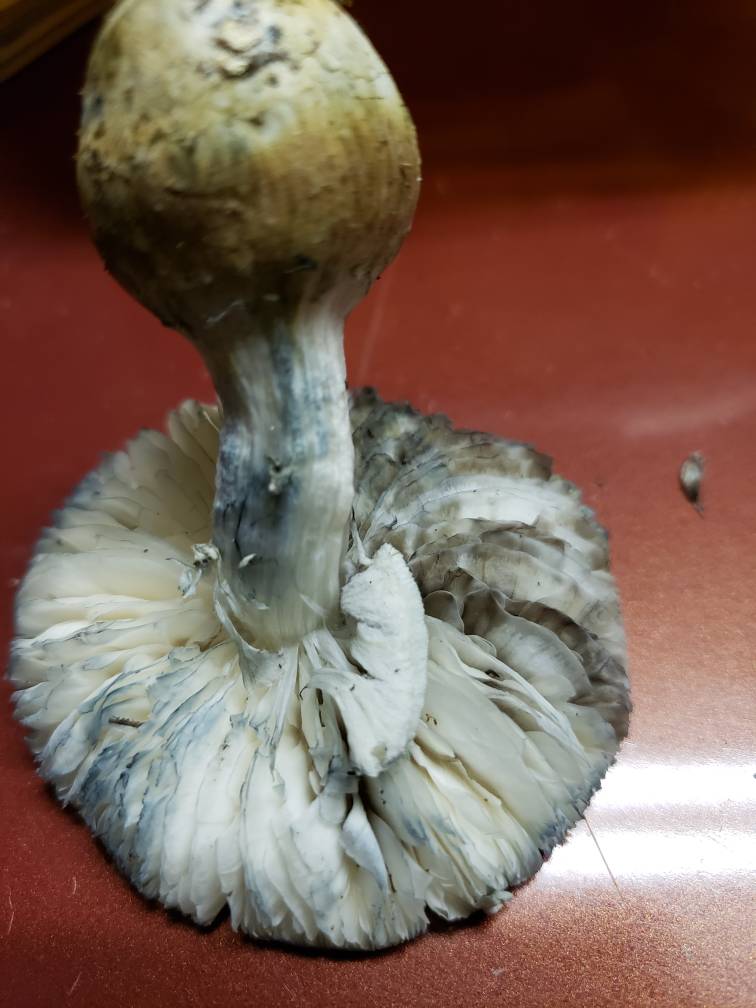 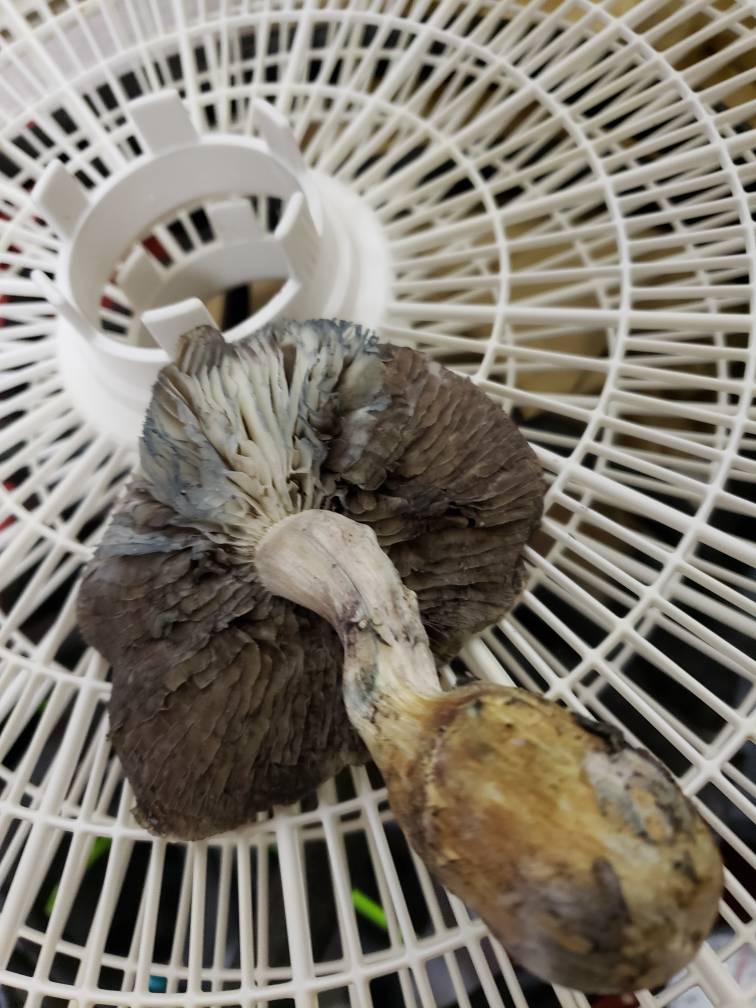 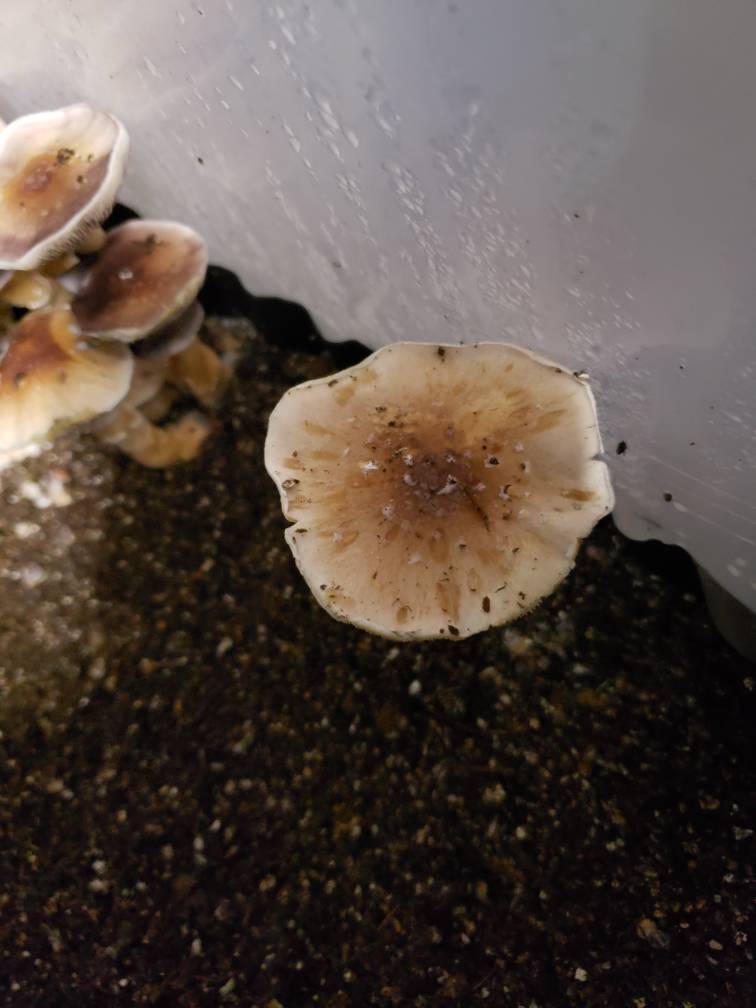 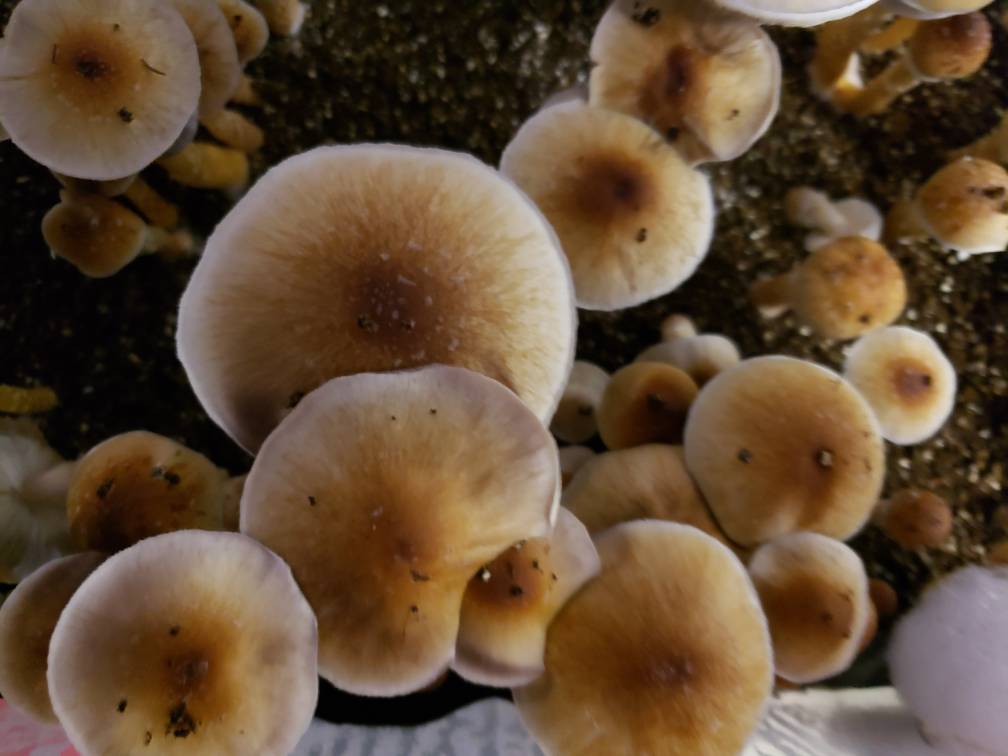 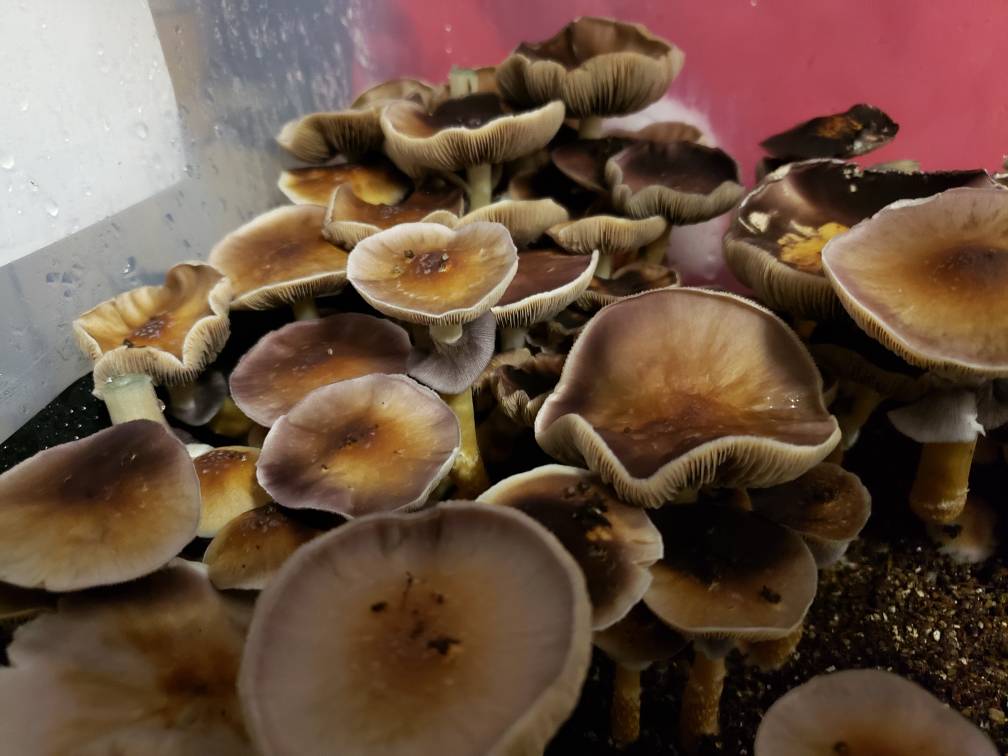 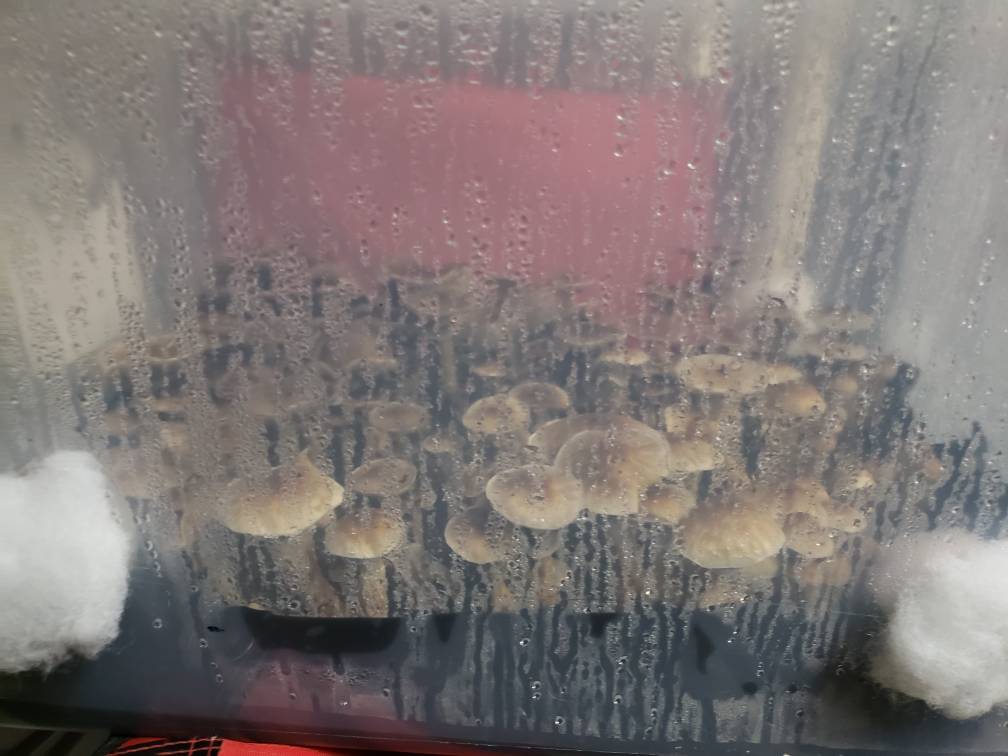 
That part caught my attention. How did you go about reviving the dry tissue?

I've heard of peeps using cardboard to clone dried fruits. Think they rehydrate it with sterile water before adding it to the cardboard.

I've also done what Kapn dank was talking about before but not on really old specimens yet. It works well. Once the cardboard is colonized you can cut a piece and clean on agar or do a quick dip in h202 and put in grain. Unless you sterilize the cardboard, but hydrating and sterilizing cardboard is an art. It tends to dry easily.

Musta misunderstood the subject. Was hoping for a cult post. Got that, just not very churchy

I've also done what Kapn dank was talking about before but not on really old specimens yet. It works well. Once the cardboard is colonized you can cut a piece and clean on agar or do a quick dip in h202 and put in grain. Unless you sterilize the cardboard, but hydrating and sterilizing cardboard is an art. It tends to dry easily.

It's not that hard but then again I think i must have a knack for things that you have to develope a feel for. Theres many things people have problems with such as hydrating cardboard, hydrating grains, and hydrating coarse sawdust from a saw mill which is why most people use fuel pellets. I had heard of moisture problems with sawdust before but the first time I just added until I thought it felt like it was between 60-70% water. Then dehydrated some of it to get an exact number and got 64% first try. Every batch since then has only varied by a few percent. I'm not saying this as a way of bragging or anything I'm just grateful it comes naturally which means it could also be that way for you. Never know until you try. I recommend cutting card board squares to fit inside ziplock bags. Soak the card board then wring out now excess moisture but dont squeeze until all water drops stop just until it's dropping a few slowly. Then roll the squares and put into a jar with a filter or if doing a lot or large pieces use a filter patch bag. If it's just a few cardboard squares an hour in the pc should do well. If it a god size chunk in a bag give it a good two hours maybe a little more. The large chunk will keep in enough moisture in the bag that you don't have to worry about it losing any from a longer sterilization. Then to clone insert the card board into the sandwich bags and open the cardboard square like a sandwich and insert the dry tissue (the layers pull apart easily after the glue's been cooked) after that seal it up and it won't loose any moisture and it will usually have enough air in it already to colonize the square completely and if not it'll definitely give you enough colonized cardboard to make a transfer. Molds also seem to move really slow on card board so don't freak out if do get a little spot or two. They'll rarely grow beyond the diameter of a US some before the mushroom either surrounds or consumes it. I use the same method with woodlovers except I sandwich a spoonful of colonized grains in the cardboard and use that sandwhich to add to bags of woodchips later instead of grains
Edit: i remember a thread where someone revived a fruit that was a few years old using the cardboard method so it seems like it should work for that

Musta misunderstood the subject. Was hoping for a cult post. Got that, just not very churchy

It was cult as in cultivation.(wish I could edit the thread title might ask a mod) But then again mushrooms are my church.

It's completely normal. Means humidity is a little high but as little fuzzy as are on those I wouldn't change a thing your doing. I actually prefer a small amount of fuzz on mine. If rather a little fuzz than cracked caps 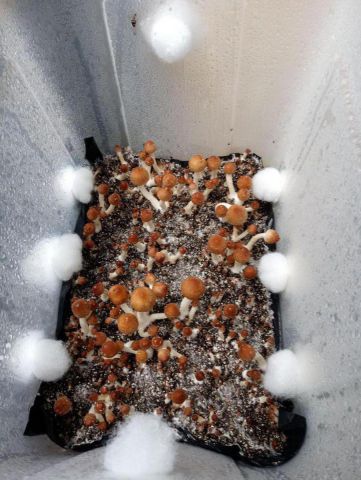 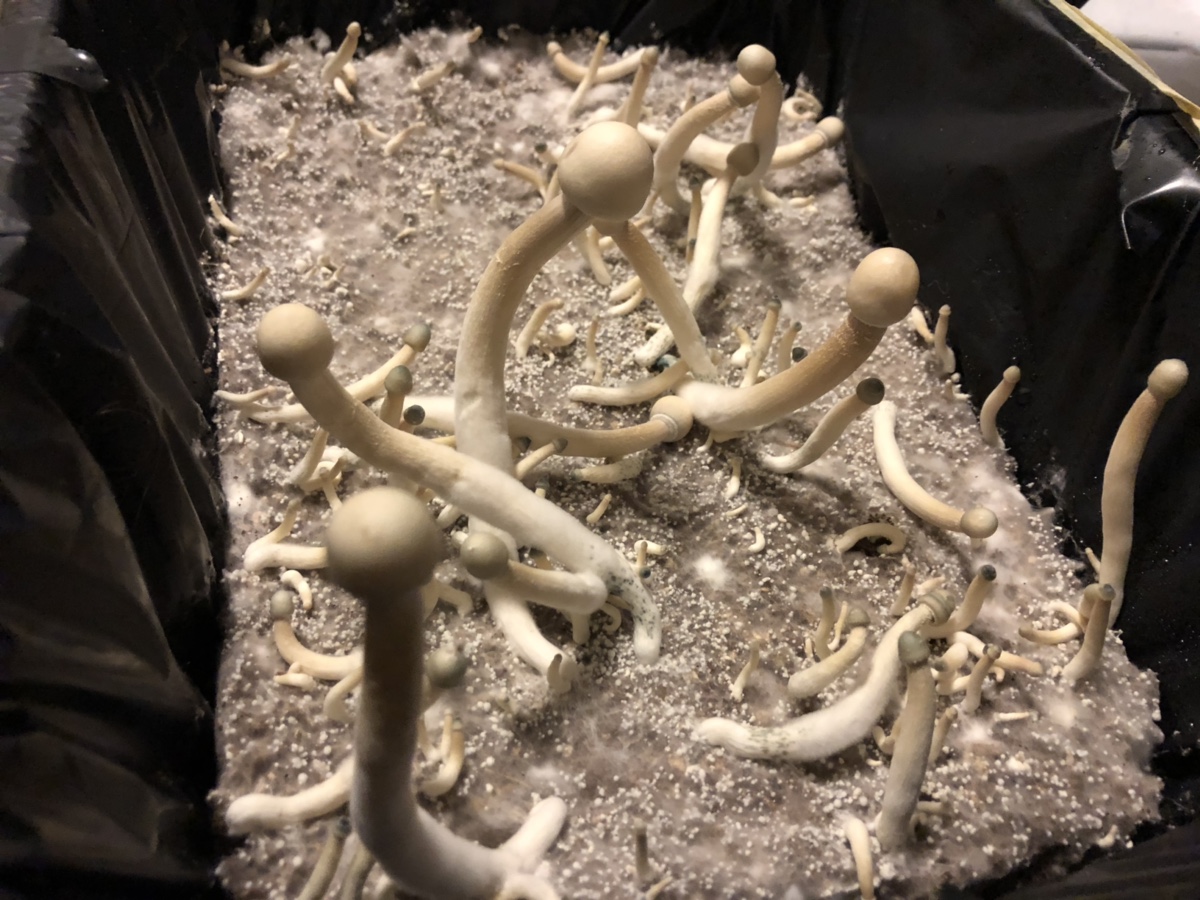 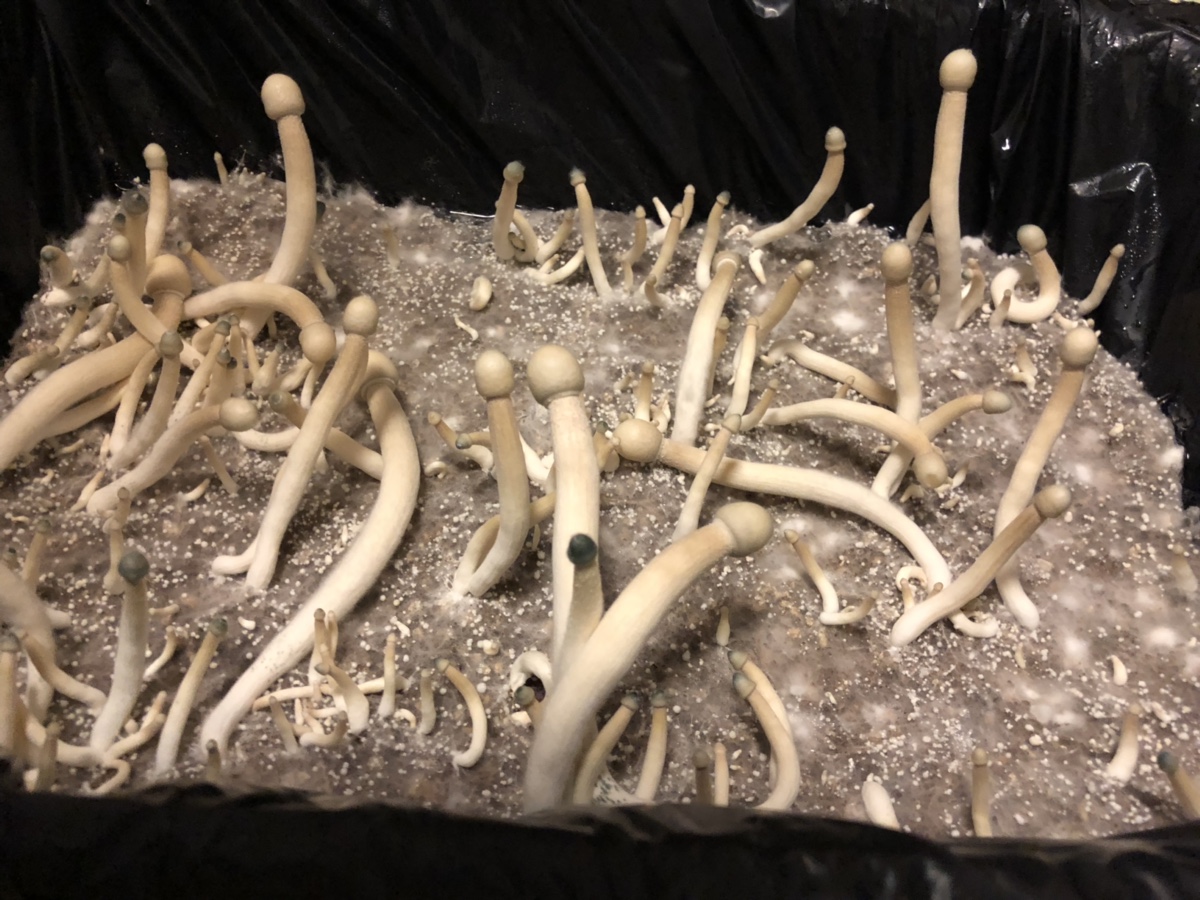 These will open and sporulate in there if I try to wait another four days, wont they?