Yeah that’s a legit site.. not trying to break any rules here about sponsors or anything but there’s been a few ppl that have grown out those monsters and swabbed them and then end up with normal looking fruits from the grown out swab.. might be that the age of the print that reinvigorated the lineage has an effect on its stability. My friend doesn’t seem to mind.. thinks it’s neat to get something unexpected.. it’d be sweet if her printable fruits then put out some monsters.. not sure if it works like that though lol

I do not know enough about how genetics would play a part in that but I like your friends attitude. There is a lot less disappointment when anything different is welcome. I am still doing my best to get fruits of any kind from any species so I am always happy no matter what I end up with.

Here’s a weird little Nepal tub I have going on, this is kind of the second flush.. it happened before the first flush was finished tho, so I guess it’s just been one continuous flush so far. I already picked 5oz from it and after I pick these I’ll give a good mist and go for another. They’re super meaty.

Alright.. love coming home and there’s like 40 pictures to wade through lol.. woman after my own heart. She let em go for the picture

The last 2 PE tubs coming in

Mystery melmak pins coming in (can’t get this one to upload vertically, sry)

Fahtster this lady is straight gangsta? Who she is..? Martha abracadabra mufuggin Stewart ? Lol

Haha.. what? Women can’t grow that magic?? She’s gonna see this and I’m not gonna hear the end of it lol. Her garden back in the day was mind blowing. Besides she learning from me, so... ;)

Haha.. what? Women can’t grow that magic?? She’s gonna see this and I’m not gonna hear the end of it lol. Her garden back in the day was mind blowing. Besides she learning from me, so... ;)

Most of the women I have known in my life have grown magic. Unfortunately mostly dark magic.

No,. Lol I think she got a very magic touch my friend!

She is pulling off some deadly serious, successful grows!!

In keeping with the POTD, an old 1st flush MAZ:

My first clones, my first grow to start from agar, my first grain nocced with a wedge, my first cold lime pasteurization and the first time using the recipe. It has colonized faster than anything I’ve ever grown from a pretty low spawn rate. I’m a little proud of this so far.

I’ve never really seen anybody make real use of chemical or lime-pasteurization,.

A couple times when reading the archives I have seen people do it but it fell out of style and most people that did it still did a heat pasteurization just no longer than an hour,.

I’m very curious, how is it done anyway?

Fill a bucket or something with water. Add 6g calcium hydroxide AKA pickling lime AKA hydrated lime per gallon. Soak the sub for 12-24 hours, drain and spawn. It’s mostly used for straw. In this case I used it for the whole sub which seems to have worked out just fine.
This sub is chopped straw, Black Kow, coir, verm. Cats says he still uses it for his straw. To be honest I like this sub and process so much, if the fruits love it, this is probably my new recipe. Super clean and much easier than using heat even though I have an automated system for heat pasteurization.

Are a reclone (clone of a clone) if this culture..

She wanted to clean it up because those ^^^^ bins came from qts that looked like this when they were spawned:

They were very bacterial (but they didn’t smell off at all) and the reclone colonized the grain clean, but the interesting thing that we’ve observed so far is that even though those top two bins are being rotated 180 degrees everyday (the first ones weren’t), they still seem to prefer fruiting heavy in one side of the substrate... those top two bins are coming in almost identically as far as fruit positioning... thought it might be a lighting issue (lights are positioned on the wall the tubs are stacked against), but I guess not. Culture does what it wants lol

Fahster, when are y’all casing those tubs?

As soon as they’re 100% or at least the exposed surface is completely white.. between 3-5 days after spawning

They’re cased with pasteurized jiffy mix @ ~1/2”... then once that’s about 90% colonized, they’re recased again between 1/4-1/2”. After that, the sub is patched by moving the uncolonized sections of jiffy over to the colonized parts with a gloved finger. When that’s fully colonized, it’s played by ear... some experimenting was done. Sometimes it was left after that to fruit and sometimes it was patched lightly/thinly in spots that became more colonized (you can even see in those two top bins up there that one was patched further than the other—left one was patched further). Not too much difference between the two. They’re pretty much in knotting stage by that point. I’d say about 2 weeks to get there.

As far as moisture content and misting of the casing layer goes, the jiffy mix is brought up to field capacity before pasteurization and after it’s applied, it’s misted fairly heavily (probably just before it looks muddy)... that’ll let the rest of layer of casing absorb some of the mudiness and put it back at field capacity as some moisture is lost during pasteurization.. that’ll carry the casing moisture for about 2-3 days. Then a light misting is required about once a day after that to keep the casing moist (especially on the side that sits against the LED lights)

Even though the LEDs are low heat, they do produce enough to slightly dry out that side... being that the tubs are rotated 180 degrees each day, the whole tub gets a light misting about once every other day (you can also tell by the color of the jiffy mix if it’s dry—a neat trick is to put a small amount of casing material between the two pieces of liner so that it doesn’t get misted or water dripping on it from condensation on the wall.. that way you can compare the dry jiffy to your casing on the surface of the sub since they’re right next to each other. If the sub’s casing is getting as light in color as your dry jiffy between the liner, mist those parts)... that continues up until about 1/2 way through fruiting.. at that point, the fruits themselves thwart drying from the lights.. those top two tubs will probably finish up in 3-4 days (about 21-23 days from spawning in average with the cultures she’s been working with)

I was taught that method for PE by another OMC member at another site, Tedsdead. It’s all about casing depth with PE and maintaining surface conditions and providing plenty of FAE.

With all these successes of cultivation, I figured we need to balance out success with failure.

This is what happens when you forget About the oats drying and they start to germinate. I need to “flatten” my learning curve. Hahaha. We all need a little Levity in our growing experience right? As America’s best dad says - D’oh 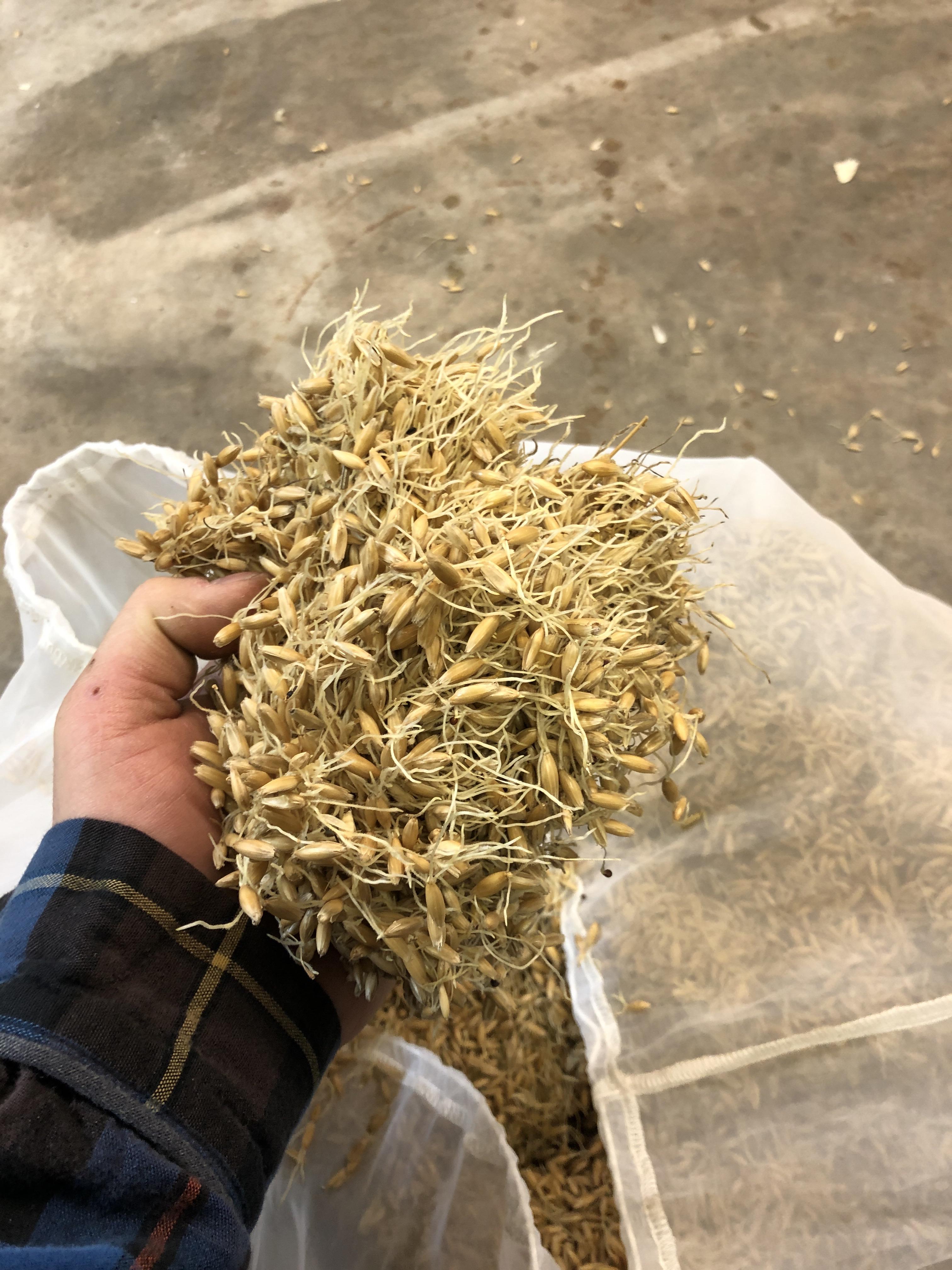 G.w.m progress, not the greatest pinset that I had anticipated but something is better then nothing. I ate 1g yesterday and was fairly buzzed, the potency is decent.

Hoping 2nd flush yields the bulk of the weight, the sides havnt shrunk up yet.

Faht,. Please ask your friend to provide an everyday object like a pack of cigs for perspective in one of the big totes in the future, please!

Love looking at these pics!

She’s done it before (the lighter)