84 replies to this topic

As for people having beliefs based on misinformation ? It happens all the time. Is that a very meaningful aspect of this particular debate? I don't see that. Ymmv.

It probably is to women in Texas who need an abortion but can't afford to travel to a more modern and civilized part of the country.

Another point that ought to be mentioned is that the debate about the legal status of abortion is really about access to safe abortions, not abortion itself since that's always been a thing whether it's been legal or not and always will be. Making it legal makes it exponentially safer, which seems to me to be a genuine pro-life position.

When we all have to start paying for the wave of unwanted children and the associated social problems that will result (increased crime, poverty, more unwanted children, etc.) then we'll all care a lot about this issue even if we're men who are beyond the age of childbearing.

All points worth considering and, imo, not detracting from the complexity suggested that lies beyond, "my body my choice".

I suspect, if more people were deeply honest, we're already paying for "unwanted children" in myriad ways. Would federal bans on abortions increase this? Possibly. How much? I have no idea.

I'm going to have to agree with you, August, after 24 months I'm pretty sure it would be called a homicide...

(I assume you meant weeks?)

Ha! Good catch. What a bummer of a gestation period that would be.

I believe there is. Her body, her choice. That was easy.

Hence my support for legislation.

I find that term to be a bit of a conversation stopper, and maybe that is what is was designed to do

You don't have to have unyielding support for something while still believing others have a right to access it.

Why do we need more  legislation?   The only new laws that I've seen proposed are restricting rights, not giving them.  IMHO more laws are not the answer.

The only reason this has become the issue it is, is because of legislation.  Abortion wasn't illegal until a law made it so.   The government shouldn't be in the business of forcing a woman to carry an unwanted child.

For the record I would agree with that statement, all I am trying to say is I can hear some of the concerns on the other side of the argument and they don't always sound crazy. Is it enough to change laws, yeah I would say no, more legislation at this point seems overboard. The arguments made for or against usually seem to quote the extreme ends of things and I think we know they are not as common as arguments make them seem.

It's the Grodain knot of politics. It boils down to whether one thinks of it as "aborting a fetus". Or, "killing an unborn child".

This truly is the crux of the argument, where one draws that line. Personally I have to admit it sounds a little bit like killing babies, or at the least, its not not killing babies. Its confusing quite frankly and its not as easy for me to figure that out as some would say. That being said I still support a women's right to have the legal right to make that choice for themselves. At some point we have to admit there is a line drawn in the sand of where that becomes the case. Everyone seems to draw that line at a different point.

You know another interesting thing about this discussion is that it is often framed in the context of man versus woman. The assumption is made that all women are automatically pro abortion, I would argue this is false. Likely more women than men would be against abortions if you think about it logically. If dudes were the one's who could get pregnant you could get an abortion with your oil change.

My guess is if we collected anecdotes from everyone around abortions, how many times was it the guy who wanted to get one?

I suspect, if more people were deeply honest, we're already paying for "unwanted children" in myriad ways. Would federal bans on abortions increase this? Possibly. How much? I have no idea.

Here's one hotly-debated perspective that tends to attract strong reactions from both sides:

I should be encouraged to post more memes than words because ...fewer words! 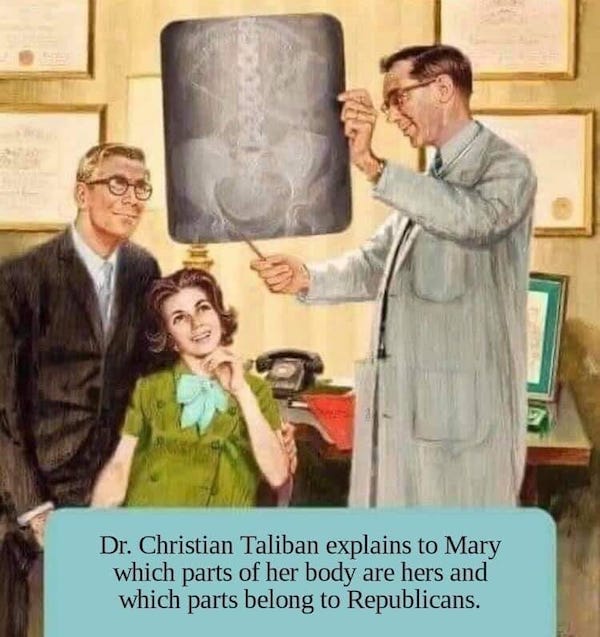