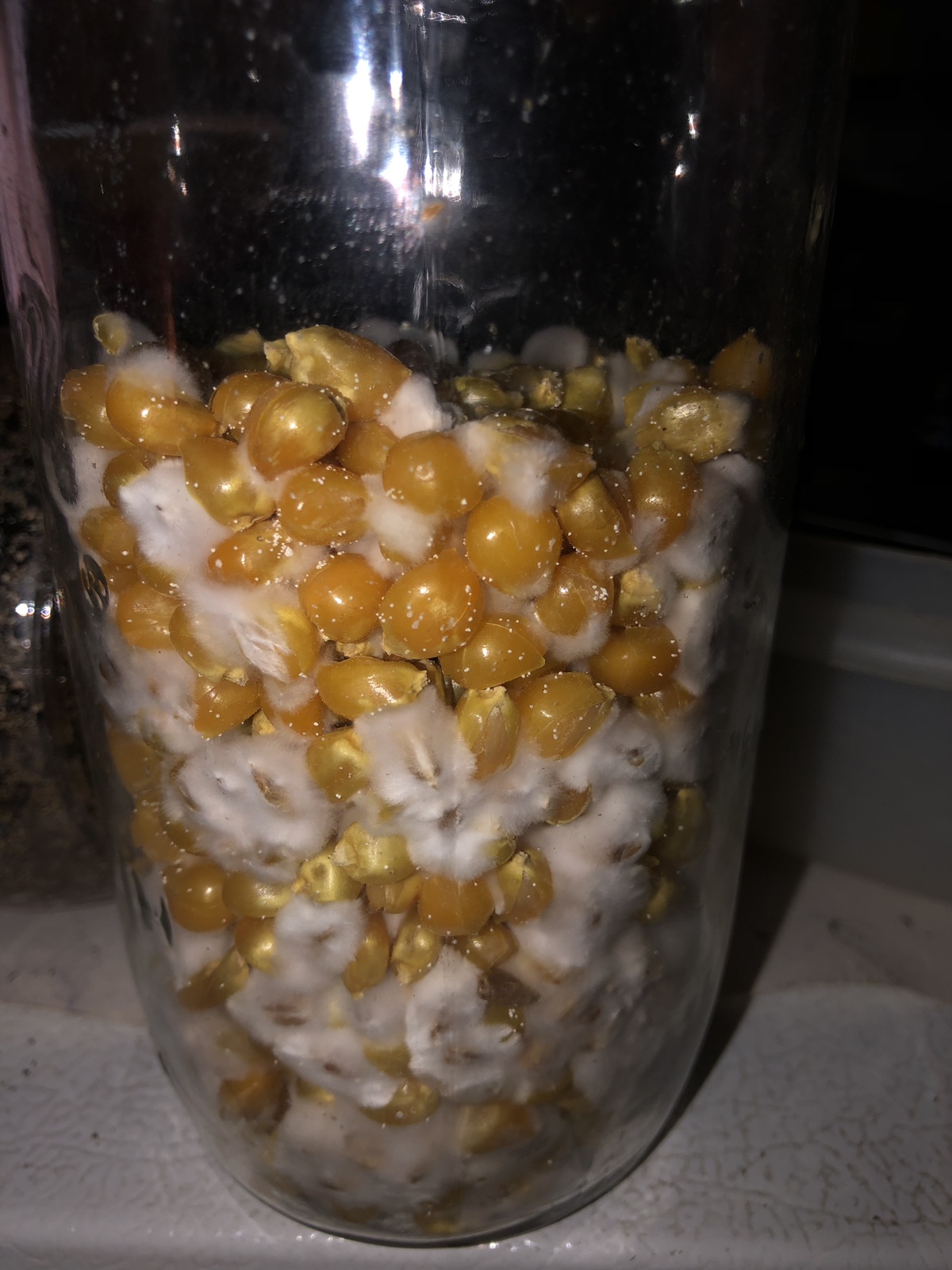 Anyone know what’s going on here? I’m pretty sure I gotta toss it,. Gonna wait and see what happens first.

Did the dots spontaneously show up all of a sudden, and at a different time than the colonies of mycelium appeared?

Contaminants don't generally grow or show themselves like that, so definitely keep waiting a bit to see how things progress. I imagine that you'll know for sure one way or the other by tomorrow morning.

So he's been hanging out with 70-year old women in Japanese geriatric hospitals?

Lol I was thinking Candida when I saw the yeast infection spots. Couldn’t resist adding that particular one though. Kind of a wake up call to when we say “Get that stuff out of the house!” Don’t try and save it.

I've never had a contam show up like that, so if that had been one of my jars I would've watched it one more day to make sure it was actually a contaminant. I only ever seem to be plagued by mold or bacteria when my stuff goes bad.

Wouldn’t the mycelium be eaten by the contaminant or vice verse? I can see it on the mycelium in spots and there is no reaction at all ? But I’ll take your word for it and throw it out if that’s the consensus,. And so coors Mikey are you saying it’s a dangerous bacteria or saying it looks like that bacteria ? Educated guess? Or just as a good example that in this hobby it’s possible to risk ones health if not taking an aggressive precautious stance on unidentified cultures??

It looks more like a type of yeast than a bacterial contaminant. Some contams aggressively kill and consume our cultures (e.g., Trichoderma), some just grow alongside them causing other problems, such as greatly-reduced yields (if you're lucky).

If your grain wasn't covered in dots yesterday but it is today, it's contaminated. Since that wasn't mentioned in the original post I didn't assume it to be the case.

Edit: And yes, you are most definitely increasing the risk to your health if you do not take an aggressive (but more importantly informed) stance towards any manifestations of contamination. By "informed" I mean that you have studied the issue a bit before being confronted with it (ideally), which is how you know not to open a jar that has nasty stuff growing in it; you either throw the whole thing out (jar and all) or you run it through your PC again to kill the contaminants before dumping it and cleaning it.

IMO, what to do or how to handle contamination (or possible contamination) is an under-appreciated aspect of most introductory growing TEKs and it should be an integral part of all of them. I suppose the only reason why there haven't been more problems reported among home growers than there have been (and there have been some very serious problems among growers here and elsewhere) is that most contaminants are of relatively low virulence, fortunately. Most...

When you hear about stuff like how the VERY common Black Pin Mold can, under certain conditions, colonize your sinus cavity and basically eat your face off you start to take it real serious when you see it growing in your jars, or on an old loaf of bread in the kitchen (where you'll generally see it most often).

Ok thanks,. I did just now do some research on yeast infections,. Thanks a lot for the help guys!

A photo or two would be very helpful in answering that.

But chances are that no, it would not be worth it. If it finishes colonizing then it would be worth dumping the grain outside where it might pop a few mushrooms, but the contamination will still be there and you're far better off chucking bad or even highly questionable jars.

The most expensive part of growing like this is your time. Don't waste it trying to save pennies worth of grain.

I would go to support TVC's comment on "Making an Informed Decision" on whether or not it's safe. Whatever it was is still there and you need to choose to accept our opinion of the it being a yeast hitchhiker or something else. I don't want to be the one to say its safe and hear that something bad happen, but do I know people that will make sourdough cultures from wild local yeast and nothing bad happens.  Do your research on yeasts/ candida and make your own call on that. Also without a scope and at minimum some agar Yeasts are our educated guess.

Also, I wanted to add that you can't really be 100% sure that yeast is the only contaminant present.

Hell yeah, that’s all good advice thanks guys! And thanks for taking time to answer,. I looked at this site didn’t find much info. Looked at one other site and people were so mean about it to anyone that asked it in the past that I think people were spawning in spite of the heat the got for asking lol I am gonna just get rid of the infected jars. I will post the one or two jars that have showed no sign of the contamination just to be on the safe side, Incase you guys spot something I don’t. Seriously thanks a ton! This is why I don’t bother with signing up and spending time elsewhere!