52 replies to this topic

Popcorn is a newb friendly experience at whole grain preparation since its prepared just like wbs or rye (although I've had to cutt my soak times down to just 12 hours less i over hydrate and cause mushy kernels) which is worth a mention since not to many people are experienced with popcorn as spawn because truley it does not yield as much mushroom weight for the amount that goes into a tub.

I'm averaging 1oz dry per 1Liter of popcorn for 4 consecutive grows, someone brought up hay as a bulk spawn additive because of its nutritional value.... I may add coffee grounds to my next project to see if I get over 14oz dry since 14L is going into a coir tub..... if it produces a additional oz or two then maybe popcorn is the newbs whole grain of choice with a nutricious substrate....worm castings didnt yield anymore then the 8oz I was getting.

Another fact is popcorn greatly benefits from hydration in coffee water, the mycelium growth is far more dense and rhizmphoric then the thin whispy growth when popcorn is only hydrated in water.

Popcorn just lacks something and I dont know what it is but the coffee seems to add a great benefit to it..... I'll know more about any yield increases as my grow completes...popcorn is also excellent for beginners to practice g2g transfers and it's worth a mention that popcorn can be steamed in a large pot for sterilization it doesnt need 15psi since my pressure cooker has a pressure leak and only holds somewhere between 10-14psi

So with that secret out in the open, how many newbs would ditch pfcakes and go for popcorn cause it really should get more credit then what it deserves but once again the only prob is it does not yield as much as say 14liters of wbs would put out 2pounds of dry mushrooms where as 14liters of popcorn will only put out 14dry oz...

But still, it's easier to prepare then pfcakes and has a potential to be used to inoculate nutricious bulk subs which then might play a role in flush weights

Had a long night last night with various mycology tasks I needed to complete, and finally got around to the syringes since I had everything clean.

First, and foremost. This is why testing stringently leads to future ease, and success. I was able to successfully extract some pan cyan mycelium. However, I noticed two things. One, and I hate to admit it, the lid didn’t function as intended. Two, most of the sterile water from the first syringe was absorbed by the corn.

With that being said, the yellow filter lids will go to grain spawn quarts that need less GE, and air displacement in function. That will allow me to inject the mycelia slurry in some of my grain jars without purchasing even more filters, and swapping them, more labor. As the filter allowed the syringe to push the sterile water easily into the jar, extracting the slurry back into the syringe proved more difficult, but still got something for our efforts. .22 micron is too small. I will be doubling to a .5 micron for the slurry lid filters. 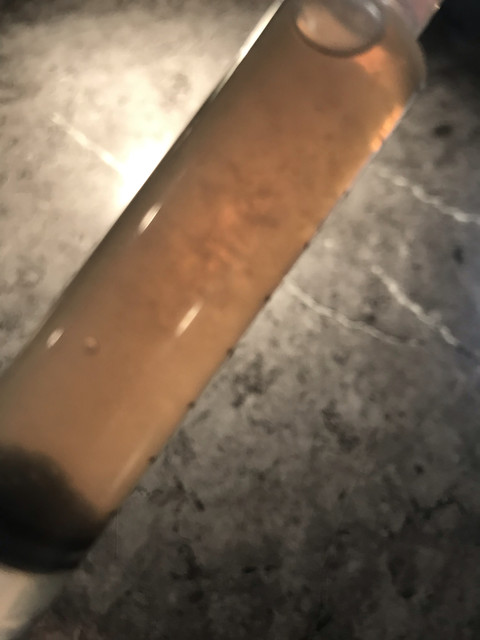 After completely testing the lids, I have decided to proceed.

The pan genetics are in the fridge until my second grow tent comes in, and I can allocate them a specific environment.

With that being said I want to actually test injecting the slurry into grain jars. Last week I managed to capture clone tissue from another species, and it’s looking great on agar.

Right now I’m working with three slurry jars. One is the recovering jar from the previous pan cyan mycelium extraction. After watching the kernels soak up over half the sterile water from the first syringe I want to test how well it recovers, and if if it will colonize the corn a second time.

I cleaned out the other two, sterilized the jars, and I am currently cooking new corn. They will get loaded up and PC’ed to be inoculated tonight. I’m going to transfer two separate wedges from the same clone isolate. This time however I am changing something. I’m going to add another jar with a self-healing port with sterile water Incase I need more during extractions.

After all that we are going to shoot up some oat jars, and try to figure out the magic number for the inoculate.

Others who use slurries or liquid cultures how much inoculate do you inject into a single quart jar. 1-3CC?

Good idea to make a second jar to expand your inoculant.. that’s what I did and it works well... there’s really no way around losing some to the coating of the kernels/absorption.

They will definitely recover... maybe not as thick as the first time but you can most definitely do multiple recoveries/extractions

You can use a little or as much myc water as you want.. depends on how fast you want the jars to colonize.. I’ve done 6 quarts with one of those corn masters, but I think I settled on doing 3 and after I expanded to a second jar, I’d use 10ml per quart and they were colonized in 9 days with a shake at ~30%.. when using that much, I’d recommend tilting the jars almost horizontal after inoculating and rolling the jar to distribute the liquid all around the bottom

I personally wouldn’t go below 3mls per quart... they usually dried out too much when using less than 3

Good idea to make a second jar to expand your inoculant.. that’s what I did and it works well... there’s really no way around losing some to the coating of the kernels/absorption.
They will definitely recover... maybe not as thick as the first time but you can most definitely do multiple recoveries/extractions
You can use a little or as much myc water as you want.. depends on how fast you want the jars to colonize.. I’ve done 6 quarts with one of those corn masters, but I think I settled on doing 3 and after I expanded to a second jar, I’d use 10ml per quart and they were colonized in 9 days with a shake at ~30%.. when using that much, I’d recommend tilting the jars almost horizontal after inoculating and rolling the jar to distribute the liquid all around the bottom
I personally wouldn’t go below 3mls per quart... they usually dried out too much when using less than 3
Faht


Absolutely. The first go around I autoclaved the syringes already filled with 10CC of liquid. It worked, but wasn’t the most productive. I ordered an epic fuck ton of 30ML irrigation syringes, and larger needles. I’m going to go into the SAB with sterile packaged syringes, and a jelly jar with the same lid as pictured above. Instead of corn that jar will be full of sterile water. It’ll add more steps and cleanliness, but I’ll get the most inoculate.

Which is especially helpful now knowing how much I need per qt of spawn.

I also believe the first round of sterile water that gets absorbed by the kernels isn’t a bad thing like it felt the first time. I may have lost water, but it helped with the recovery.

Transferred cubensis agar wedges across two individual corn jars. I felt like it was sloppy work! See you guys in 3-4 days.

Hey Cybele.. I was digging through some pics and came across a couple of corn jar shots that you may find interesting. This first one is a dried PE corn jar (I used the adjustable GE/FAE Tyvek lids to dry it out to “freeze” it in its young state and store it) before I harvested the myc water..

And this one is after I extracted the myc water and then shot it up with about 12-15mls if water to let the corn rehydrate and grow more myc for later extractions.. I think this was a few days after the extraction

It didn’t usually grow back as thick as the first time, but there’s plenty for new extractions

I am seeing very similar results. It’s taking almost twice as long for the culture to colonize.

We have growth on the two cubensis popcorn pints. Nothing picture worthy, yet!

Eleven days from the transfer, and two slight shakes later.

Both cubensis jars are fully colonized. The mycelium is extremely aggressive. This time I’m going leave the jars incubated the day of extraction. During incubation the moisture content is drawn out of some popcorn, and rises from the bottom. Placing it on the top, and sides of the jar. This should help with the water loss during the first syringe.

I sterilized some water and tonight I will be seeing how many 10cc syringes I can get from each jar.

Well, I ended up passing out last night, and was not able to get it done. Luckily I have some more down time tonight, and we’re not only going to extract and make the syringes. I am also going to inoculate some bags I made with Oats!

Time to actually use, and test the syringe.

In the meantime this is how the jars look currently! 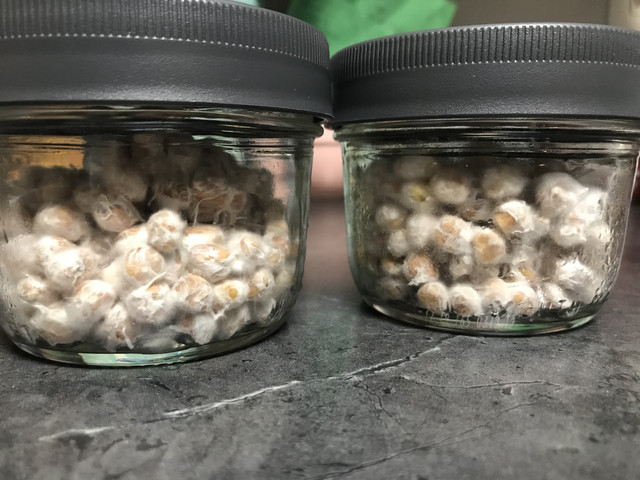 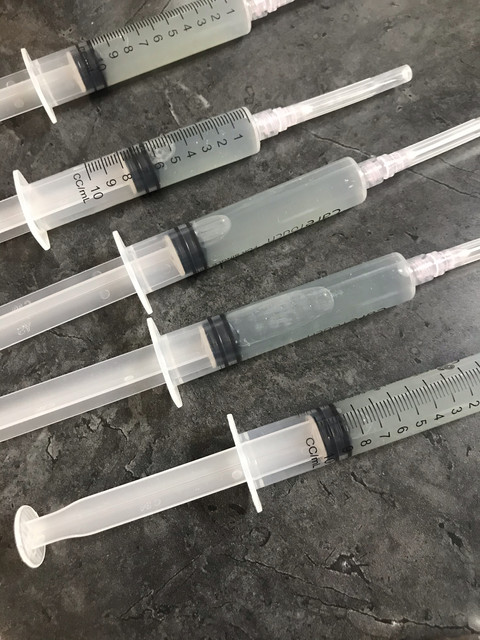 Well I finally got around to extracting some mycelium from the two cubensis popcorn jars. I felt more comfortable this time, and felt like I had less resistance from the syringe filter (.25micron) maybe because the jars ran through the PC twice since I tried with the Pan Cyan culture.

However I am still increasing to the (.45micron) syringe filter. Too easy to replace them and apply sealant again.

I managed to extract 94CC of inoculate. Some of the syringes are more densely packed but I believe all of them pack a punch. I used five 10cc syringes per pint jar. With each syringe adding more water, shaking, and then extracting.

Hopefully tonight we will be inoculating a 5cup container full of brf as a test.