Hey all I'm back, I wanted to show you my next grow session, and what species I'm working with. 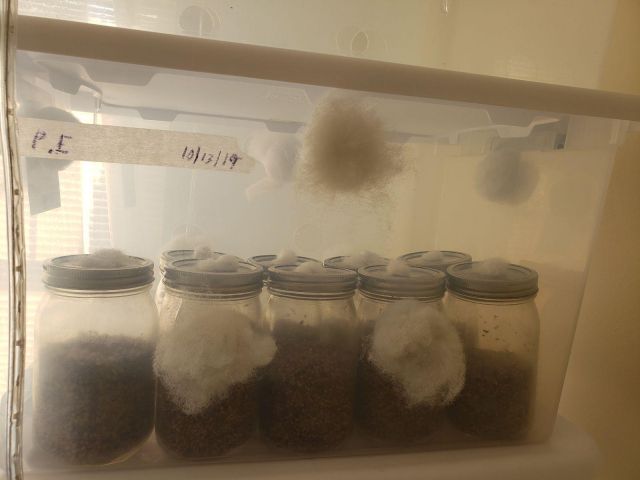 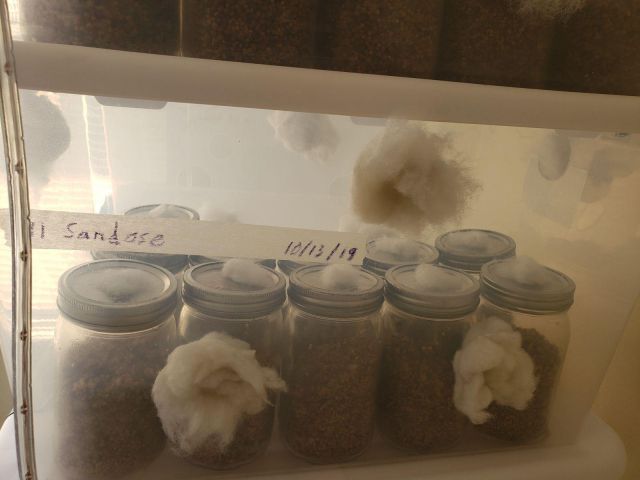 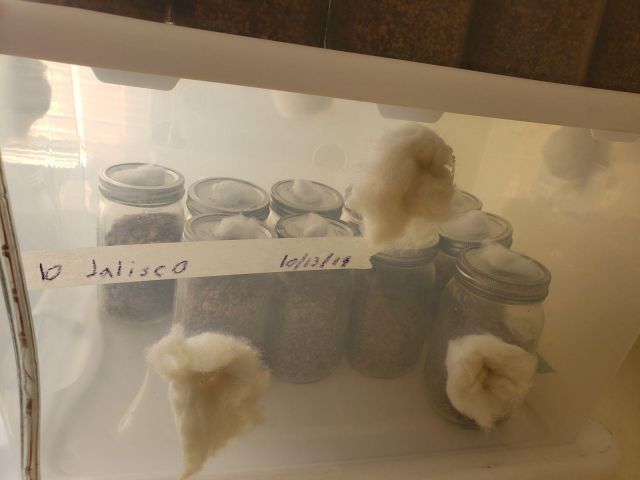 *P Cubensis Penis Envy, I think it's the regular version.

*P. Copelandia Cambodginiensis, Sandose, requires manure or else it won't produce to its most potency, from what I've learned.

*P. Mexicana, Jalisco, Idk how to make the fruits appear, so I'm going for healthy truffle growth first, then deal with fruiting them later.

All of them except for the PE are from spore syringes, the PE was from a wedge I kept on some agar from my last grow. All were inoculated into quart sized grain jars with wbs. I guess popcorn would have been better for the Jalisco, or some sort of wheat or rice grain, but I'll try it on basic wbs just for the heck of it. If I have to eat the wbs with the truffles, I'll do it, but my main focus was to get the fruits, since they supposedly have more actives in them compared to regular P.cubes. The Sandose is claimed to have a way higher potency than the fruits from sclerotial varieties, so hopefully I'll be able to test that claim.

All were spawned to jars on the 13th of Oct, and I've only began to see growth in the Sandose and PE jars so far. I'll post updates of the jars colonizing as they go, and of course more after they're usable.

Neato! Hey, I see you're using the good old polyfil in your grain jars, cool. I like to just stick MP tape on. Some people don't think MP tape allows enough GE, I've never had that problem with it, I did with some post office tyvec I glued on jars, that didn't allow GE. Polyfil is good though, i just like the cleanliness of tape.

Neato! Hey, I see you're using the good old polyfil in your grain jars, cool. I like to just stick MP tape on. Some people don't think MP tape allows enough GE, I've never had that problem with it, I did with some post office tyvec I glued on jars, that didn't allow GE. Polyfil is good though, i just like the cleanliness of tape.

Thanks, yeah I just had a lot of pillows, and I like to use the most common materials available to me. I agree though, breathable tape is usable for grain jars too.

I used to use 100% silicone caulk to adhere felt cloth strips to the jar lids for a GE barrier, but with me, polyfill seemed to have the same chance for contams as the felt, coffee filters, and tyvek strips I used.

Btw, here's an update on the jars:

Penis envy(Sorry, this picture has way too much glare to show the small bit of mycelium) 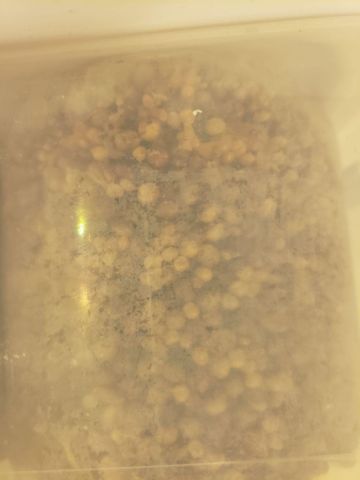 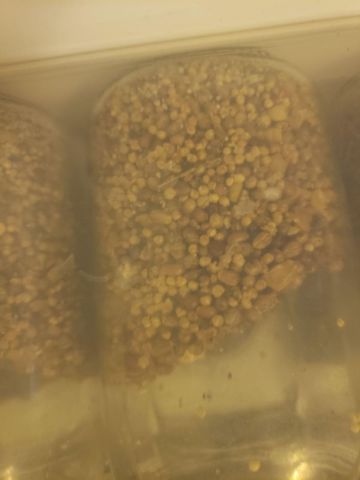 I couldn't put a picture of the jalisco jar that showed a nice white puff of growth, but all strains have inoculated to their grain nicely. Only problem i'm going through now is that my backup computer is starting to screw up, and now I can't upload more pictures as easily, or rather, I don't know how I could do it now.

I look forward to watching this grow. I'm soon to start PE and Psi. tampanensis and I put some old cambodginiensis spores to agar three days ago.

I like to just stick MP tape on. Some people don't think MP tape allows enough GE, I've never had that problem with it

This might be of interest for comparison. I'd repeatedly heard the concerns of medical tape not allowing enough surface area or getting coated with goo when shaking the jar, so I've been putting squares of denim from worn out jeans between the lid and the tape. It acts like a funnel, expanding the surface area of the hole to over 2 cm2 while the texture of the cloth prevents it from being sealed by a mycelium coated grain hitting it. Its worked so far.

That's a cool idea. There are a lot of those little tricks you learn doing this stuff. I love it.

I'm interested to see how you make out with the jalisco. I haven't had the best luck yet, I keep trying little experiments in hopes of finding what works best. So far, the only yield I've made has been a small one from PF cakes...

Well here's an update on how the jars are progressing: 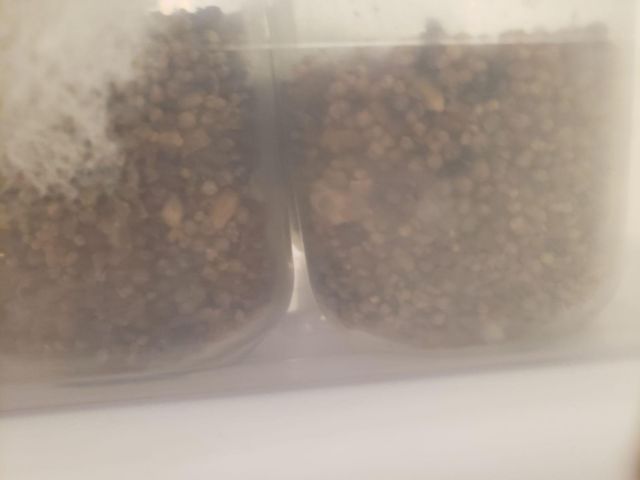 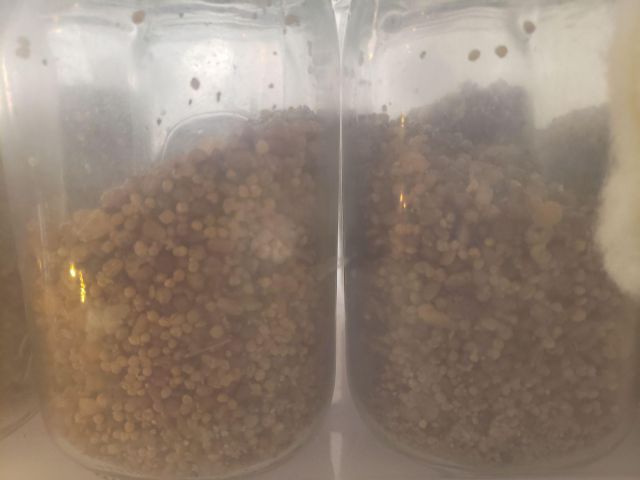 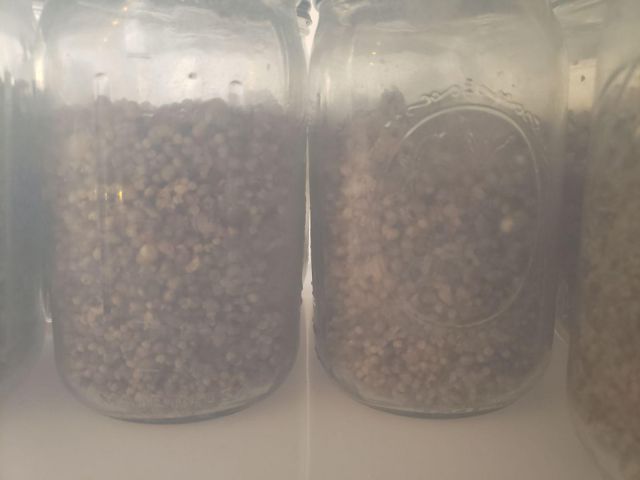 They've all taken to the grain nicely enough, but the Jalisco is colonizing a bit more slower than the others. It's hard to see from the glare, but the spots are spreading. I shook the jars after I inoculated them, so that's why the spots are all over the place.

I'm interested to see how you make out with the jalisco. I haven't had the best luck yet, I keep trying little experiments in hopes of finding what works best. So far, the only yield I've made has been a small one from PF cakes...

This'll be the first time I ever tried a stone producer, so I'm hoping that if I can't fruit it, I could at least make some truffles and get experienced with working with those.

Something's telling me that I might have to use manure within the substrate with it, just like the Sandose, if I want it to fruit properly, but idk.

i sorta avoided 36fukin5 and tractor at allgood 2010 because they wanted to trade stones for molly and cubes. i hear stones dont pack all that much punch. NOW, being older, i like the idea of stones.

Alright, It's been about 7 days since I inoculated the jars, and decided it was time to shake them all. I'm not so sure if It works the same with all three of them, but I'll be reporting back with the results.

Here's how they looked before I shook them: 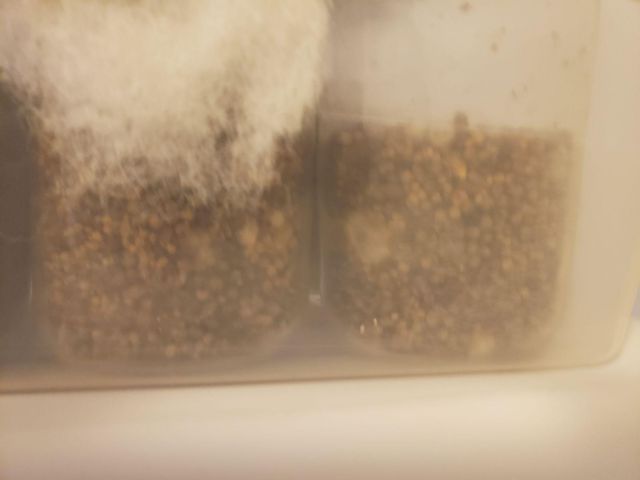 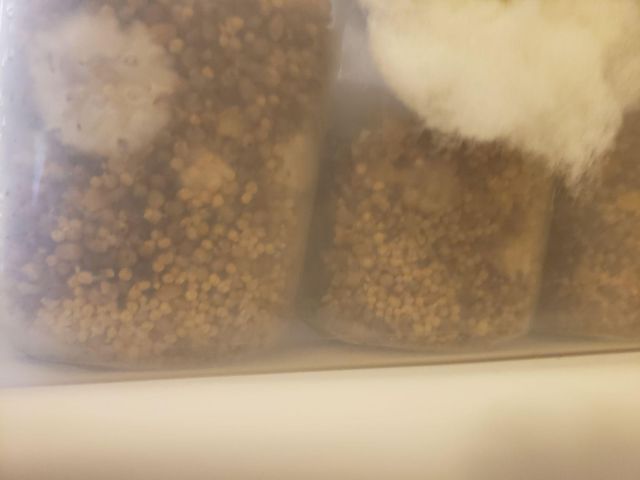 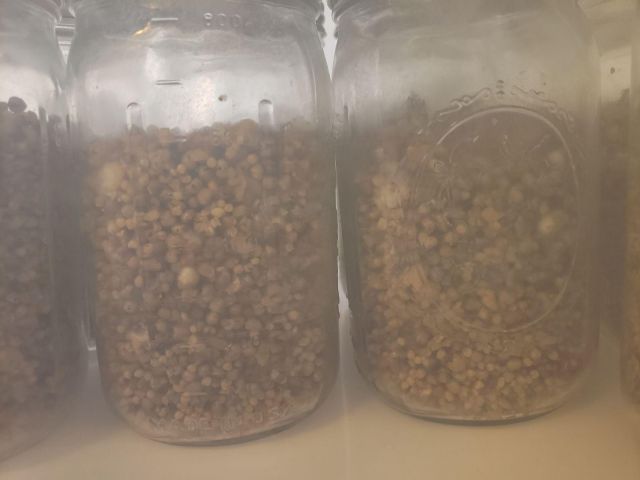 The PE was around 25 - 35% colonized throughout most of the jars, so that seemed good enough.

The Sandose was around 45 - 60% colonized, it just seems to grow so fast compared to regular p. cubes, and that's really interesting to me.

The Jalisco was around 25 - 40% colonized, it's mycelium looks way different than the PE or Sandose, but I knew that it was more colonized on the inside because of the thick clumps of grain that I had felt during their shaking.

Now I have to wait for them to fully colonize. I'm also waiting on some PE tubs whose substrates were enriched with filtered composted manure. I'll probably put the tubs into fruiting in 2 - 3 days from now, I'll post pictures to show how it goes.

And now it's been 13 days since I inoculated the jars, and as far as I can tell, the PE and Sandose are close to, or fully finished.

The Jalisco looks different, though. The mycelium grew in a weird way on agar, and on grain. Made a lot of fluffy white spots that looked like advanced growth of some mycelium I'd expect to see on p.cubes, but I knew that it was just what that type of mycelium looks like from multispore, especially when it's young. It seems to have colonized throughout the grain very nicely, though. 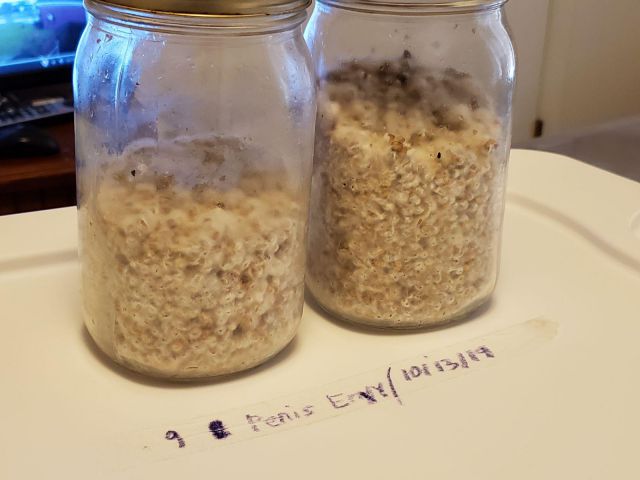 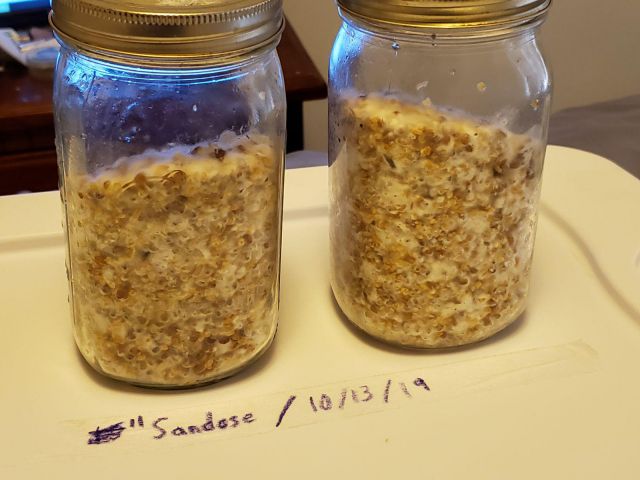 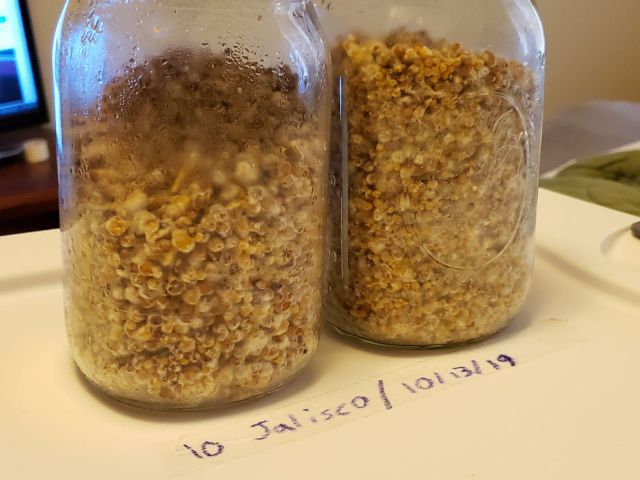 EDIT: Oh, and the tubs that I was talking about, it looks like both of those were flops. I screwed up with the pasteurization process, so I might just sterilize everything this time, and try again.

So I did my spawn run with the PE for most of the tub grows, but I've been trying qts of my Sandose to try making a few tray grows with different substrate recipes. I was trying to figure out a way to use composted manure, but I kept failing. I just made a modification to damein's50/50 sub for p.cubes and made it more easier for the mycelium to "spread across and downwards" more easily and quicker during consolidation, so here's hoping that'll work out. 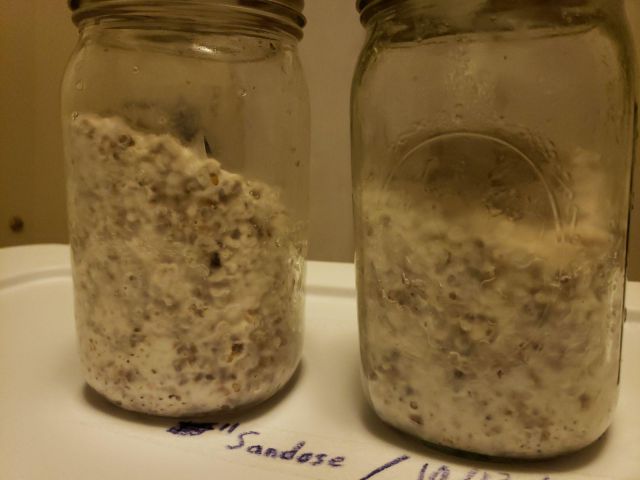 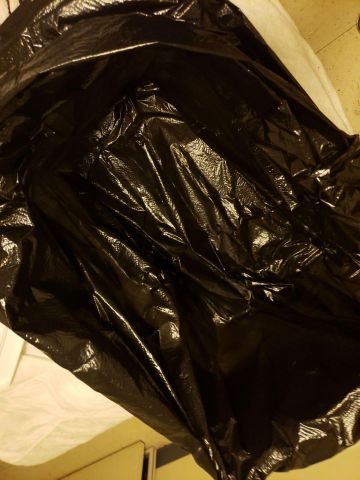 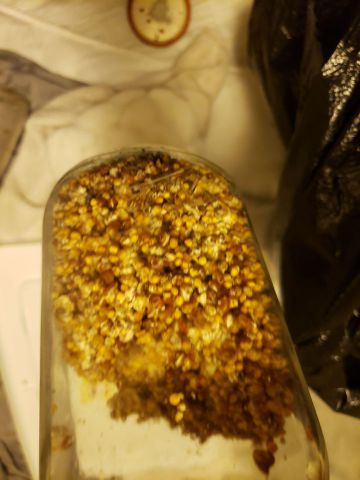 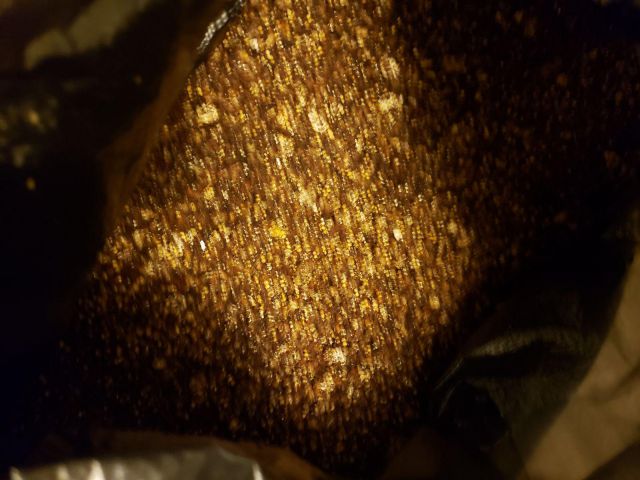 Along with that, the Jalisco jars are still looking nice. They haven't changed in any bad or concerning way yet, so that's always nice to not see. I'm keeping the jars, not gonna use em for g2g, but I do have some on agar so that I could isolate a monoculture. During the entire colonization process for the Jalisco, the mycelium grew on each individual grain as though they were getting covered in glue, from my perspective. Very different grow rate comared to the PE and Sandose 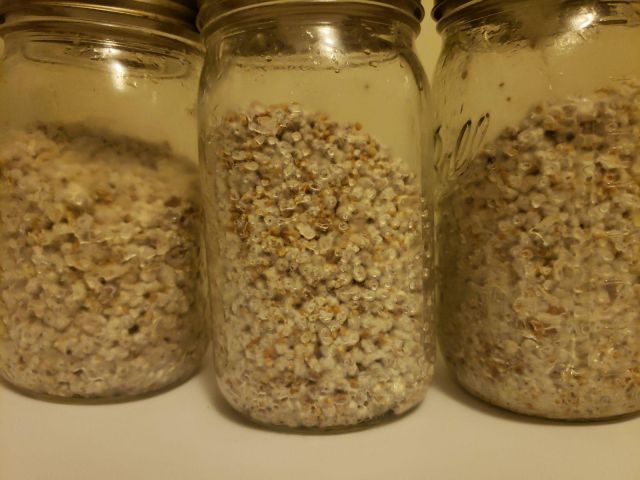 Alright all, now I'm fruiting all the tubs. They've all colonized either to 100% or close enough that the whole surfaces are covered in mycelium.
Sandose: 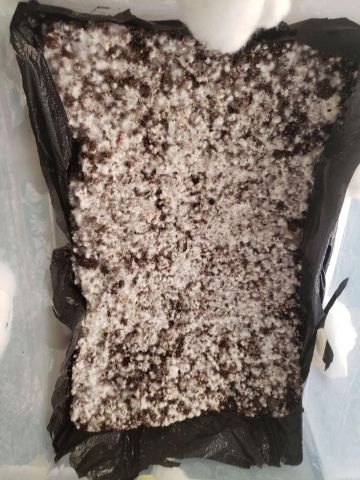 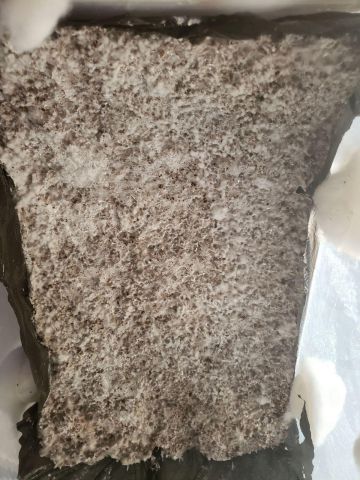 I think I added a bit too much water to the substrates, though, but I don't see a lot of bad signs(for me) of anything wrong.

I changed my pasteurization process from using just a bucket and lid to using my pressure cookers, since most of the water seems to evaporate out by the time 2 hours pass. Just heat the water till the PC starts knocking or the pressure builds up, turn the heat off, wait till the pressure goes down and stuff my pillowcases in, and shut it close to boost the pressure back up, then I just let it sit. The temperatures seems to stay around 150F - 180F for about 2 hours or so, not high enough to carmelize or burn things. It seems like this works good enough for me, though.

Now the next thing I gotta do is figuring out how I'm gonna case the Sandose, since I heard it overlays more often than P.Cubes.