98 replies to this topic

Damn Cat quoted me so I can just delete my nonsense ramble like it never happened.

Damn Cat quoted me so I can just delete my nonsense ramble like it never happened.

I think that you mean "can't just delete".

Is that stolen from the guy that wondered if the moon cycle played a role in potency?

I like to keep things in orbit, not deep space.

The next full moon is on December 12th at 12:12 AM ET, it's known as the Long Nights Moon. Hmmmm time to prep and dig up my gong hammer.

I just throw cocaine and beer at my cultures to increase potency, but only during the full moon. Specifically on the night of the vampire:

The next full moon is on December 12th at 12:12 AM ET, it's known as the Long Nights Moon. Hmmmm time to prep and dig up my gong hammer.


That next day is also Friday the thirteenth, home to an annual meteor shower, and my birthday.

Sounds like a pinnacle of trip timing for me, but I’m just not ready.

I am going into some soil science for my degree now. Nothing heavy, as I’m sticking with wildlife, and no science I can quote you with . However I do know this. You can design a substrate to increase yield. That’s fact.

What we can do to increase the potency in subs is nothing.

Eat more or grow higher alkaloid species. I can only assume even if you grow for years to select high alkaloid genetic cubes you could in a quarter of time grown a different species with a higher content from the gate.

P.cubensis are already pretty potent compared to the species that grows in grassy areas (cant remember the name but they're infamous in western canada and called liberty bells in the u.s)

If p.cubensis dont cutt it for some odd reason then the next one up is pan cyans by 10% and one higher then that are azures by 20%

This guy from Europe goes by the handle Anand who's a mastermind of cultivation and has tips and tricks not posted in anything I've read on the internet gave me the best advice about using Adler chips that are collected during spring when the sap content is at its highest to grow azures....we have all four seasons here in eastern canada so I'm sure spring here would be time to plant the patch....anyways, they say just a sliver of azures is enough for anyone...they're the most potent of all psilocybes Next to amita muscaria (hopefully I spelt that right) but the thing with amitas is if they're not properly prepared the neuro toxins are liable to make someone sick or if a high enough dose be fatal which is why I think ralphsters spores went to shit shortly after they began offering amita spores....I dont see any other vendors with them but not like I'd care to cultivate a potentially lethal mushroom anyways.

I forgot to mention scelortia forming species, they're somewhere between a strong p.cube like pe and a pan cyan in terms of potency, I accidentally grew the mexicana (b) instead of the (a) and got one pebble sized stone which was enough to make the walls breathe


, p.cubensis can vary from speciman to speciman, my hobby is growing out all the novelty name sakes and sampling, I've done at least 15-20 in 16yrs and would have to say that the slower growing ones produce stronger mushrooms compared to the cubensis that are super fast (in a controlled environment with temps the same) some cubes like it hotter then others, I guess it comes down to the speciman original habitat, blue meanies I hear are strong as a cyan and do better in cooler environments then say golden teachers that do much better in a warmer environment like around 80f I'm finding from growing them out currently....slow as a turtle at room temp, if I apply 80f they fly....

Just my observations about cubensis...

But I'll say it again just because my post isnt long enough, coffee in the soak water (not! grounds in the bulk) will defiantly aid p.cubensis growth and from my experience the potency goes from having to eat 1g dry to .5g dry for the same experience..... well, my current grow cant be finished soon enough, I'm anxious to try them now that I've soaked the popcorn in coffee water.

I knew the guy that discovered oakridge by a nuclear power plant growing near a tree he said....his handle was jeetered on shroomery, a argument took place between him and another person about who discovered the original specimen, the other guy not jeetered alleged that he sent jeetered the print who then stabalized a culture over a period of generations before releasing it. It's still not stalked by spore works but I would love a print of one if you have them or take some adrian118.....I'll get them in wider circulation ;)

I remember Jeetered and I grew some Oak Ridge from spores he sent me. And I remember the "feud" of the discovery.

If I remember right, it's been some time now, it was an aggressive growing shoom and was a good boomer as well

Best of luck this time around. I think for the first time going about it do the dose that you have done before. Cubes are plenty potent for me growing on pure brown rice, spawned to coir and vermiculite. You might also want to try taking higher doses, sometimes I take 5 grams or more and its like pretty strong, an eigth can be pretty strong too but higher doses blow it out of the water IMO

FunG I do plan on taking some prints and will gladly send one your way.

Things are looking pretty good too! Just a few more spots to fill in. It does look a bit odd to me the way the myc is staying near the bottom... makes it look like i have a deep verm filter layer which I dont. At least not that deep... I guess I jus shot them up all low 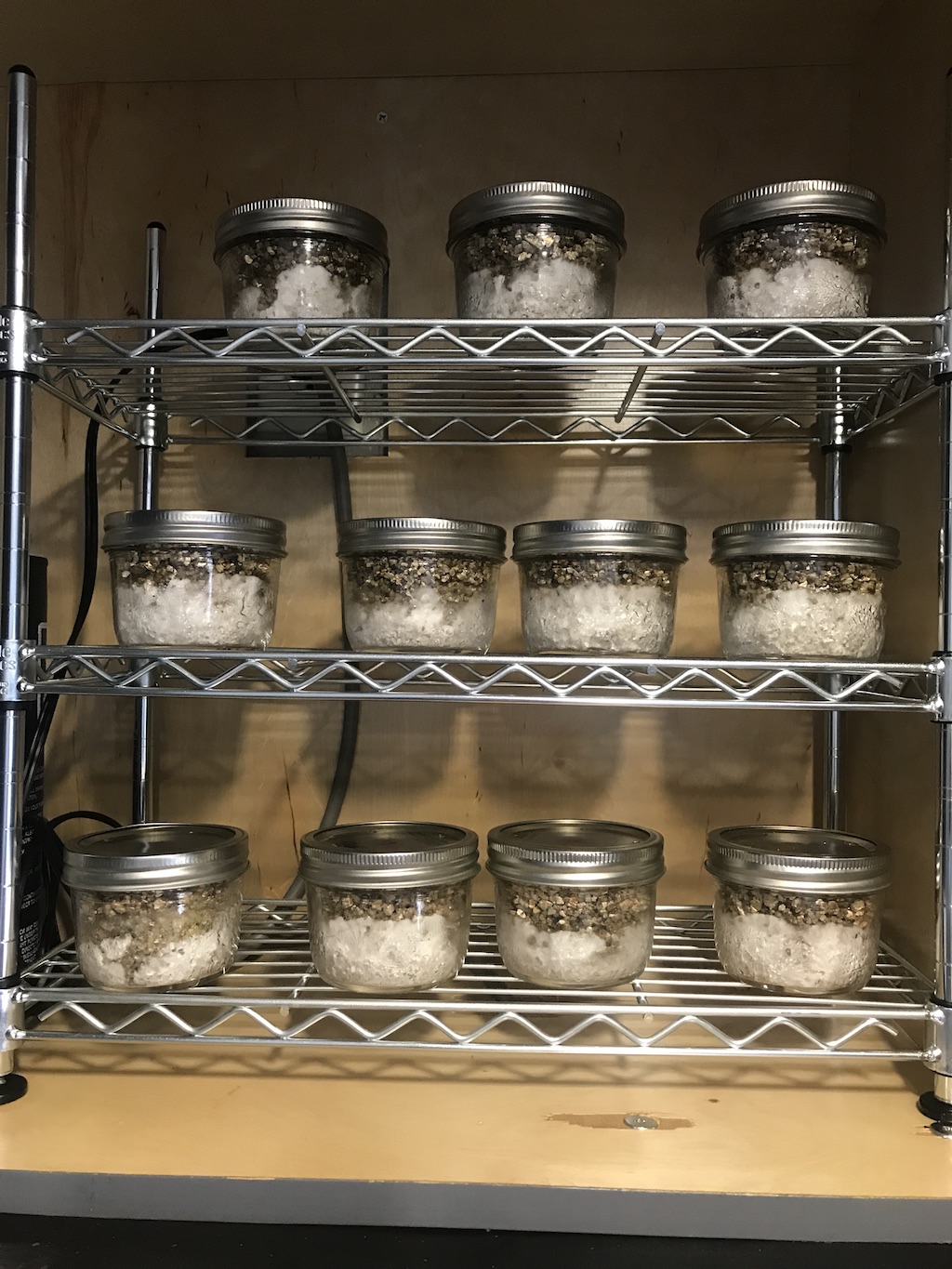 I was about to say that verm layer is THICCC

Contam? This jar is not wanting to colonize any of that, its been days. Actually i see more of a greenish tint in the pics that i wasnt noticing just lookign at them. Yikes!

These jars dont seem to want to colonize these sections for some reason. Its been stalled here for a few days now. Was lettign them go thinking they would eventually overtake whatever is there but now Im questioning wether their gone. Rest of the jar is lookign good.

Also, over all most fo the jars are stalling on colonizing the upper portion of the jars. Havent seen this before so im lookign for insight.

The top jar is bad.

PC it before cleaning it out (and clean it as soon as it's cool enough to do so) or else just toss the whole thing. It's already dropped a heavy spore load in that jar so whatever you do, don't open it without PCing it first.

You can use a sharpie pen to trace around the edge of myc in the other jar to see if it's growing at all or has totally stalled. Stalling can be caused by a contaminant or by the sub drying out too much, so it may not be bad like the top jar.

Here are a few of the other jars I suspect are either stalled in a section or contaminated.

Ill try your suggestion of marking the area and seeing if its growing or not. What do I do if it is stopped? Birth and dunk still when others are ready? I usually bunk my cakes together in a one giant mason jar. I may try somethign else this time in case I contaminate all of them at once. Right?

If a jar is contaminated and stops growing, it will reveal itself at some point by sporulating (which is usually a distinctive color) or stinking up the place. If it's just stalled then it will just stop growing.

The jars in your last post are almost certainly contaminated.

It would be good to determine how; it might be from the spores, a compromised verm barrier, an issue with technique, or inadequate sterilization (it's probably not the last one). Every contaminated jar got that way somehow, and ultimately mushroom growing is about managing contamination (so growing fungi is easy, it's the not-growing of everything else that's hard). It's interesting that we think of ourselves as "growers" when we actually spend most of our time and effort on exterminating countless life forms.

And PCing before cleaning them out works fine, and is safe when done right. It's what I do since I don't like wasting stuff that's otherwise useful after a bit of cleaning.

Damn Ok. I'm pretty sure I know when/where i botched this project. Was hoping for the best. Something came up during the inoculation process and most likely led to all of this Im assuming. This would be my first time having an issue this bad so its a good learning experience for me.

Ill have to PC these guys then and salvage the jars. Hopefully at least one or two jars make it through. smh

Expect to lose jars in this game. Sometimes a lot of jars.

I PC'd jars of grain and poured agar plates many times before I got even close to any success (and I mean beyond sprouting spores on agar; this was before I discovered the PF Tek and before Mycotopia existed). It was somewhere around 80 hours of work (not counting waiting to see what happens) spread over the course of a year and a half, and I managed to grow just about everything except mushrooms for all my efforts. Then things started to 'click,' and grows improved to the point where any contamination at all (before the 4th flush) is rare/unusual.

Fungi will test your commitment. It's worth passing that test even if it takes a couple of years to do so.

TVCasualty, that comment is so very humbling to me right now.

I and many like me are so lucky to have you guys and this site. To even be able to enter into this realm at all would be all but impossible I believe without it, let alone have any success. I am definitely very much in debt to you all for the knowledge and help. You guys discovered and worked these things out on your own, without even the internet some of you! If ever there were a gif to describe my feelings in this response this would be it.