54 replies to this topic

I've seen many threads of people asking if this was possible as well as articles stating that mushroom growers are using spent grain from breweries without any details of how they accomplished it or what species they were growing.

Without much more to go on I decided to give it a go and find out for myself. It was a slow process of trial and error that led me to the point that I'm now comfortable sharing my notes with the community. I'll start with my most current method to keep this post brief and since its the only one I've really documented.

After the mash was performed I took 4 quarts of the spent grain and put it in a mesh laundry bag and tied it to a clothesline outside to drain overnight.

The next day I mixed the grain with 5 quarts of DRY vermiculite in a 5 gallon bucket. This mixture was loaded into 4 medium size mycobags.

I prepared the PC by adding the trivet and 6 empty 1/2 pint jars, added 7 quarts of water and a second trivet on top of the jars. The bags were folded over but not sealed and placed in tyvek envelopes. Two bags were loaded into the PC and the water was brought to a boil with the lid off.
Once boiling the lid was locked into place and allowed to vent for 10 minutes. Weight was placed on vent and flame adjusted to maintain 15 psi for 2.5 hours. After the cycle PC was allowed to cool for 1 hour bags were removed and immediately sealed. Bags were left to cool overnight and innoculated with a spore solution the next day.

Here it is today. 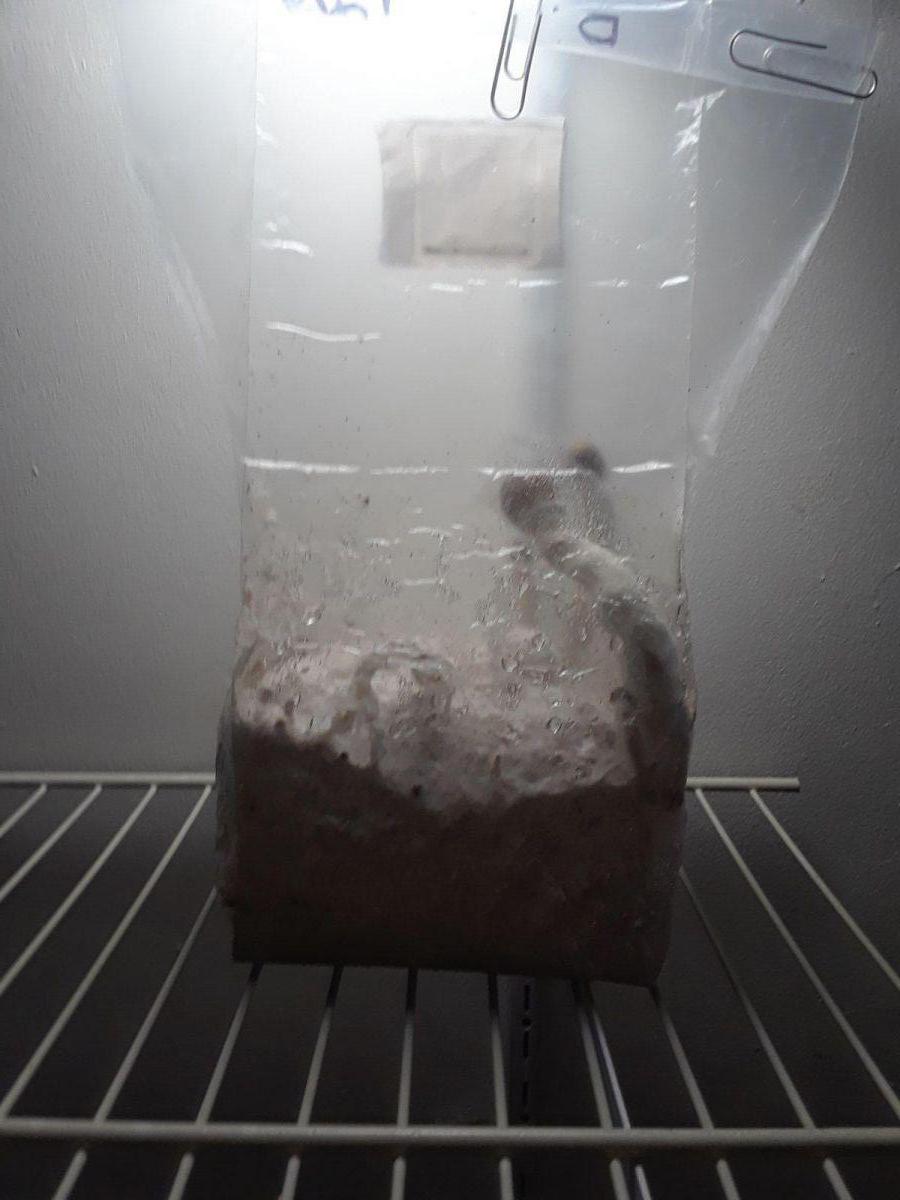 Congratulations Pastyoureyes and thank you for doing this grain run! I'm a home brewer myself and was also curious about using spent grains.

I hope the beer turned out tastey as well,
Cheers!

The beer contaminated lol. I had a liquid yeast in the fridge and it got way to cold in there and killed the yeast.

I lied, the grain bill was actually from a hefeweizen brew not the IPA. The mycelium seems to eat either. An earlier experiment was done with the grain bill above but it fruited from the sides of the bag and i scrapped it.

Essentially this is a big PF tek cake in a bag and i'm fruiting it as is to see what yields are like. Next time I'd like to try spawning these to a bulk sub bag and compare results. Pretty cool if I have the option of doing it either way i choose. The bag has about 2 quarts of verm grain mixture. Hoping for a yield comparable to 8 pf tek jars.

It is nice that it worked out, something to do with the spent grains besides compost or animal feed. Last time I brewed, I had over 60lbs. spent grains from 3 batches. That'd make a lot of fungus! :) I was worried after you removed all the nutrients from the mash that the mushrooms wouldn't have food. Doesn't seem to be a problem.

The bottleneck is sterilization. The vermiculite doubles the volume and you have to sterilize. I do 2 medium bags per PC cycle in a 23 quart cooker. I could probably fit 3 quarts in each bag which would be half grain. 4 bags over 2 cycles isnt too bad. 60 lbs would probably take about 20 cycles So if I understand correctly you are using only the spent grains mixed with a volume of vermiculite?

If so......nice. I'll bet Oysters would perform much the same and I'm curious to find out.

That is exactly what i have going on now.

I'm curious to know of your observations. Please keep posting. You stated that you wanted to compare yields from the bags to the yield from PF tek and I'm curious to see how they stack-up.

I know where I can get my hands on a steady supply of this material if it works out.

I pulled the largest fruits that were ready. Wet weight was almost 60g.

Here it is after pulling a few from the first flush. The smaller ones on the other side of the bag seem to be maturing fine 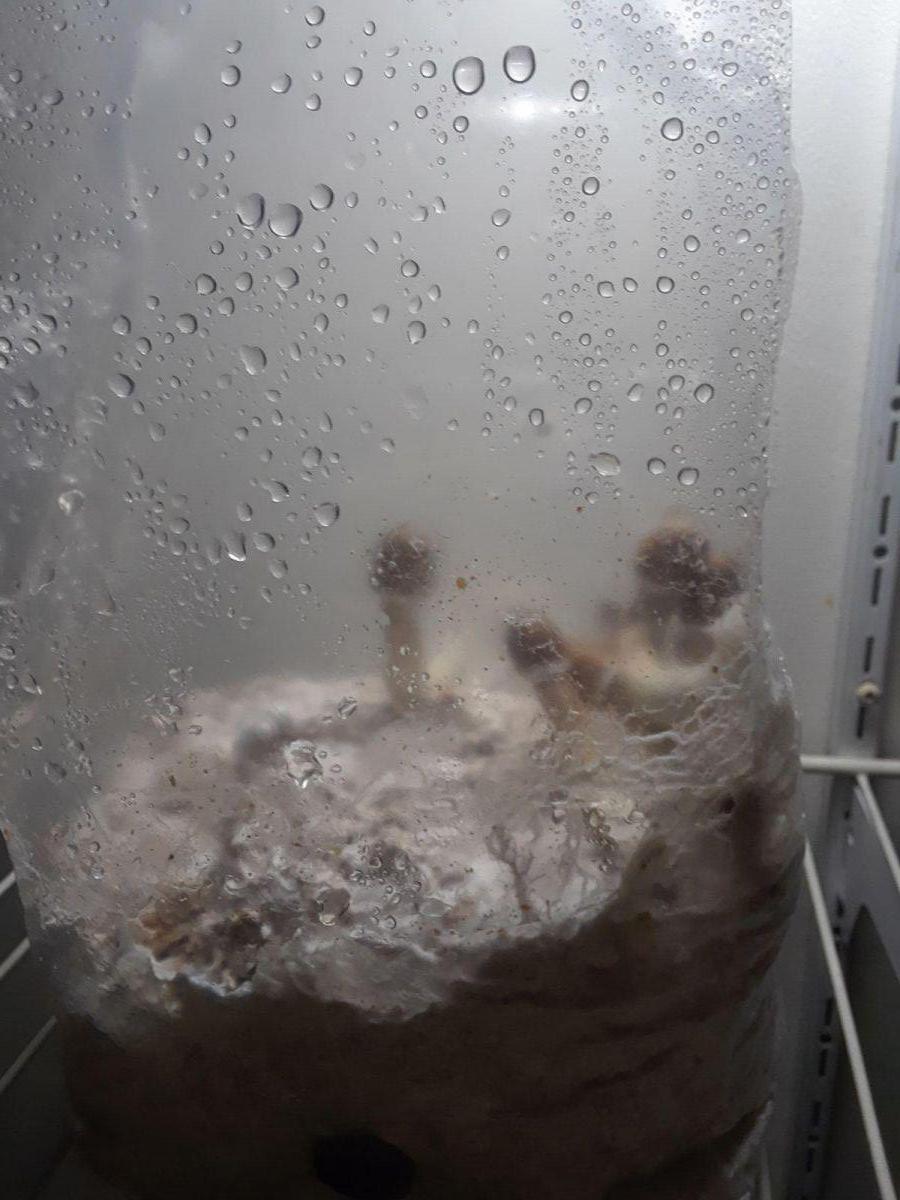 My results might not be ideal since i'm not really messing with the bag much other than opening once or twice a day for FAE and misting a little when I pick fruits.I don't have much experience fruiting bags. These bags were not meant for fruiting either since they have the smaller micron (.2?) Filter patch. 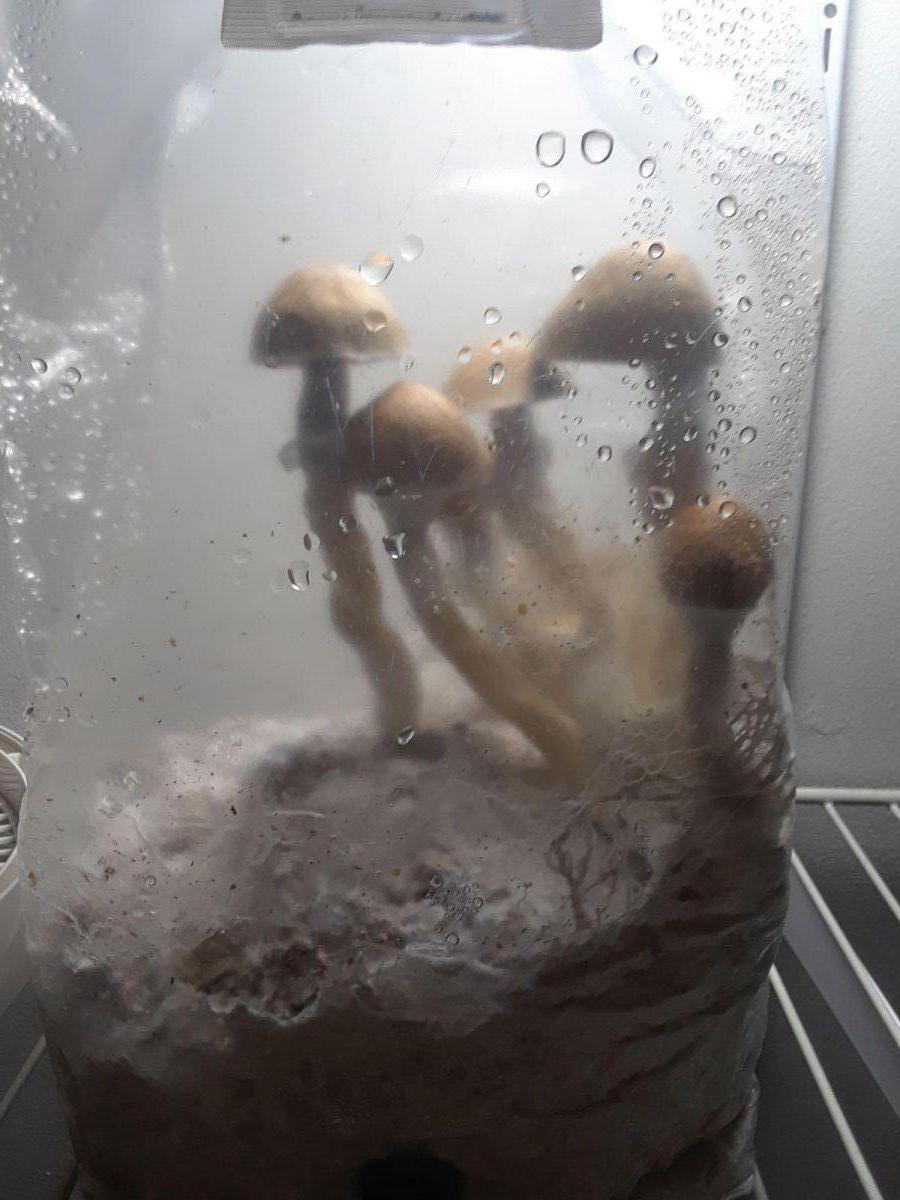 First flush was about 14g dry. Anyone have suggestions for 2nd flush. I coul cut the filter and apply tyvek or polyfil, not sure if this is a good idea. Leaving the bag open longer than a few minutes is not really possible since ive seen a fruit fly poking around the bag. Looking for advice from bag growers.

I use bags but really can't advise. My method is to open the top of the bag (as you've done) for FAE. Then I place the bag into a greenhouse / martha closet style setup for fruiting.

I would definitely dunk that substrate before the second flush.

Thanks for continuing to share. I'll be bringing home some spent grains here in just a couple of hours. Brew day today!!!

You could probably put the whole block in the martha to fruit sans bag if you wanted. Once colonized its pretty solid like a big cake. What are you brewing? I hope you'll share your experiment in this thread.

In broad stokes, I work for a commercial micro brewery as a side project to my normal job. We have a 10 barrel system and produce tons of spent mash - regularly.

I did manage to bring home some spent mash tonight. Planning on mixing as you've described.

I was shooting for a 50/50 mix of verm/grain. I just guessed at a ratio since I needed to start somewhere and 50/50 seemed like a good baseline. Are you growing oysters?

I'm getting ready to try Oysters on this mix.

Will also try the addition of some sawdust for woodlovers. I have some shiitake, pioppino, lions mane, and my favorite bioluminescent panellus stipticus. I'm headed out for hardwood fuel pellets and already have some coniferous sawdust (for some special projects). We could also consider the addition of some bran to increase yields.

Yesterday's brew was a Munich Dunkel Lager. I'm curious to see how this works out. Thanks for posting this !!