What the Pandemic is Revealing

You are correct
Thanks for catching that. The statistic was over 60% of infections are Delta variant. It has 7 mutations in the spike protein alone.
Isreal reports that vaccine efficacy has fallen from the 70 percent range to just under 50% in preventing hospitalizations with Delta vs Alpha

Just watch as future reports show an ever increasing rate of mutation in that spike protein they "targeted" for a vaccine.

Not a bad way to do it, just the wrong time to do it.

Did I miss something, have the Israelis released another report since last Thursday?   'cuz those aren't the numbers that I saw.

I think you guys are talking two different statistics here? Its even lower than 60% down to 39%. But that is infection rate, the higher numbers are for serious illness or hospitalizations and death. So basically at this particular moment the data from Israel is indicating it wont stop the spread so to speak but will stop serious illness and death quite effectively. They also noted this conflicts with data from the UK

From the msnbc article

Pfizer and BioNTech’s Covid-19 vaccine is just 39% effective in Israel where the delta variant is the dominant strain, but still provides strong protection against severe illness and hospitalization, according to a new report from the country’s Health Ministry.

The efficacy figure, which is based on an unspecified number of people between June 20 and July 17, is down from an earlier estimate of 64% two weeks ago and conflicts with data out of the U.K. that found the shot was 88% effective against symptomatic disease caused by the variant.

I read the article, and the stats I quoted were in it.   What I am questioning is where this info came from...  I went back and looked, I couldn't find anything that I thought might have been an easy mix up with these numbers in the article.

I'm just saying, if you're going to quote information as coming from a source, you need to take a few moments, and make sure what you're posting is accurate.

I'll give the benefit of the doubt.   Maybe he got his stats from a source that was inaccurate.  This is why a link to where your source info is coming from is a good idea.   It  also helps to keep people from thinking you're just pulling numbers out of the air to support your argument.

Re: Delta Variant - Podcast. At 8 minutes , 10 seconds, main contents begins, if you want to skip the preliminaries.
Discusses numbers and world wide effects of Delta.

who is Dr. Osterholm?:

"Michael T. Osterholm, PhD, MPH
Dr. Osterholm is Regents Professor, McKnight Presidential Endowed Chair in Public Health, the director of the Center for Infectious Disease Research and Policy (CIDRAP), Distinguished Teaching Professor in the Division of Environmental Health Sciences, School of Public Health, a professor in the Technological Leadership Institute, College of Science and Engineering, and an adjunct professor in the Medical School, all at the University of Minnesota.
In November 2020, Dr. Osterholm was appointed to President-elect Joe Biden's 13-member Transition COVID-19 Advisory Board. From June 2018 through May 2019, he served as a Science Envoy for Health Security on behalf of the US Department of State. He is also on the Board of Regents at Luther College in Decorah, Iowa.
He is the author of the New York Times best-selling 2017 book, Deadliest Enemy: Our War Against Killer Germs, in which he not only details the most pressing infectious disease threats of our day but lays out a nine-point strategy on how to address them, with preventing a global flu pandemic at the top of the list." ... etc. ... from

Nothing wrong with trying to be accurate right

I  re-read the original post last night and realized what you were getting at there my mistake. I knew you would get it anyway Juthro so I got lazy and left it. I might have been projecting a little of my own thoughts as I had heard something around that 60% mark for preventing infections but could not recall the numbers. I guess I could see where the mistake can get made. But getting the numbers right is important, that is one way misinformation spreads. Our memories poor ability to remember all the facts accurately, so we get a bit of a game of telephone when trying to repeat the information sometimes

They say a picture's worth a thousand words, lol... 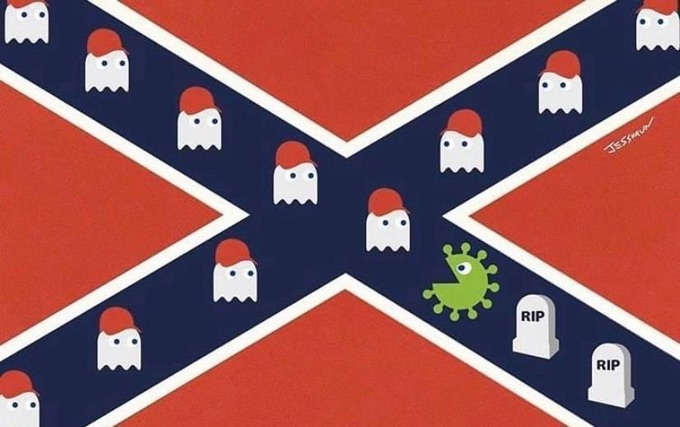 what is everybody worried about? we are in the safe hands of our governments and capitalistic corporations. you can relax now.

Looks like the Delta variant has a R-value of between 5 and 8 (the higher number is based on not doing much to stop it, e.g. no lockdowns or mask mandates, low vaccine uptake, etc.).

Alpha was 2.5-3. Some reports have it as high as 4 or 5 (https://www.bbc.com/...health-57431420).  A typical seasonal flu strain is ~1.3, so it makes sense that the flu took last season off thanks to lockdowns, masks, and distancing. Now that many are giving up on those measures and pretending that the pandemic doesn't exist we'll probably end up with the combined COVID/flu nightmare many were worried about last year.

It cannot be overstated how bad that news is, and on the cusp of so many "reopenings" with mass-gatherings at concerts and such, plus Sturgis Superspreader v2.0 is right around the corner too.

The "Spanish flu" went through a few variants and waves before the especially deadly one struck. COVID may well be the same, since it doesn't give a fuck about how burnt we are on putting up with what it would've taken to truly stop it.

At least the GQP is starting to wake up to the fact that their base seems to be in deep shit thanks to Delta (and whatever comes next might be even worse), which is probably why the talking shitheads are suddenly openly in favor of getting vaccinated and are ncouraging their viewers and listeners to as well.

It might already be too late though, once the dust settles from COVID in a few years (if it ever does) they're going to have to gerrymander the hell out of Districts even more than they already have to remain electable at all as so many die-hard Trumpublicans will have died hard by then, and dead people can't vote very often.

At this point we're all stuck on the same runaway train together. We could've worked together to slow it down or stop it, but we didn't and now we all have to ride this shit out wherever it goes. At least there will be a lot fewer reactionary, stridently anti-science "choose your own reality" meatheads around when it's all said and done.

Anyway, it's not all bad news; I bet that anyone in the market for a used Harley will be able to get screamin' good deals in a few months (or maybe it's "coughin' good deals," or "coffin good deals," even).

Maybe it has nothing to do with what mankind does and it's just nature's way of thinning the herd. The more precautions we take, the more severe She makes the virus. And, she will continue to one-up us until She has the numbers where she wants them.

It's not polite to fool Mother Nature..... remember Her saying that when we invented margarine? And, look how fucked up things have become since then. I believe that all things in the universe have life and if you think Human Beings are the smartest, toughest or anything else better than a large rock, you and I differ. LOL There are events in motion right this second that will eventually lead to the extinction of mankind on this planet....... just like the dinosaurs.

On the other hand, to be honest, we could probably do with a few billion less people on this rock.

What we really need is a virus that kills selectively based upon IQ.

Now we are getting beyond political correctness

TV: "At this point we're all stuck on the same runaway train together. We could've worked together to slow it down or stop it, but we didn't and now we all have to ride this shit out wherever it goes. At least there will be a lot fewer reactionary, stridently anti-science "choose your own reality" meatheads around when it's all said and done."

Ringo: "There are events in motion right this second that will eventually lead to the extinction of mankind on this planet."

Probably technological civilization goes first ie before extinction, there are some rather vulnerable 'pivotal' points.

But first we may get more mass starvation in some areas, and chaos accompanying mass migrations ... it will be ugly.

Its a strange time to have been born.

What we really need is a virus that kills selectively based upon IQ.

I'd prefer one that thins out those lacking empathy and compassion.

There are a lot of very intelligent psychopaths and assorted douchebags.