I recently moved to a beautiful piece of land; with a small community. It's been great so far, and I see myself here for the foreseeable future, which is a breath of fresh air after the amount of traveling and number of moves I've made in the past decade. Finally, I'm settling down.

I've been attracted to the homesteading lifestyle for a long time; I had my first taste of it around ten years ago, when I spent some time living on a commune in the NW. But now, with no plans of leaving where I'm at, and no itching feet, I'm starting to see the potential of what a life can look like spent digging ones roots into a piece of land; and the opportunities that this rooting might allow.

I love to experiment in the kitchen; especially learning traditional cooking techniques; and using them in creative ways to create novel dishes. I've traveled to a number of different countries, had the opportunity to experience completely different cuisines and styles of cooking; and , the one thing that's stood out for me is how each style of cooking in each country, is for the most part, an organic outgrowth of the food that grows in that climate. America and the UK, canada and australia being the only countries that don't actually have a 'national cuisine' that I'm aware of..

I'm very interested in taking notes from these other cultures, and tweaking these styles and techniques so that they work for the climate of where I'm at- while at the same time taking into account the difference in lifestyle behind 'grocery store eating' and 'root cellar eating'-

Questions I intend to answer with this exploration

What spices thrive not only in this climate, with it's short growing season, and it's gnarly winters, but which spices thrive specifically on the microclimate of this piece of land?

How does a hyper-local fusion cuisine morph as the seasons change? and How best to preserve food with the intention of being able to create dishes in future seasons that share the same general culinary profile?

What wild food is available to use?

(placeholder for questions I don't yet know to ask)

I realize that there is already a traditional, 'homesteading' style of cooking, which I'm familiar with, and intend to use as inspiration, but I see alot of potential to intentionally raise the bar by creating something unique'

Other cuisines I intend to use as inspiration are Mexican, Indian and Sri Lankan.

We'll see what comes of it! I intend to collect my explorations in a .pdf book that I can share with yall; but in the meantime, this is the thread for the ongoing culinary experiments.

One process I'm  excited to play around with more is the Mexican Nixtamalization process. Which if you're unaware, is the process of soaking corn in calcium hydroxide/pickling lime before turning into masa, which frees up vitamin b3 and makes the grain far more nutritious, as well as gives it that traditional corn tortilla taste.

And, I recently came across a website that sort of perfectly sums up my intentions I stated above- attempting to take the traditional nixtamlization process and apply it in a regionally relevant way, to work in nordic countries with the grains that grow best in that climate.

Forcing something like a corn tortilla taco, which evolved over a long period of time in specific geographic and cultural conditions, to work anywhere in the world is a difficult thing, and maybe not the way to make it taste its best. For example, cacahuanzitle, the particular type of corn used for tortillas, is common in Mexico but difficult to find other places, which has also led to using other, less suitable varieties for making tortillas storable and transportable as a global food. When it comes to flavour, we might be better off searching for other, locally appropriate ‘corns’ rather than forcing corn tortillas to exist everywhere but poorly. As we say in Mexico, “a fuerza ni los zapatos entran" – “not even the shoes enter by force”.

I chose to investigate the nixtamalisation process with the aim of finding a formula for people in the Nordic region – and other regions of the world – to be able to use different local grains and seeds for making their own fresh, tasty tortillas, and maybe less ‘authentic’ but more delicious versions of the taco concept.

Because the characteristic flavour and texture of corn tortillas are largely due to the nixtamalisation process, it is therefore possible to make high-quality tortillas from grains of the Nordic region, or anywhere in the world.

We decided to put this hypothesis into practice, using the taco as a concept to connect the flavours and values of traditional taco culture on the streets in Mexico’s cities and towns with the raw materials and products of the Nordic region. On the surface it might look and taste different from what I’m used to in Mexico, but the sensation is the same. Wherever in the world it might be, a good taco is a good taco.

When I'm finished with this fast, I intend to do a nixtamalization tek with photos. Check back in a week or so.

This is a really interesting idea!

I found this site recently, you might find it useful:

They have articles on a lot of different subjects, I'm all over their gardening pages.

Had a mad hankering for dosas; which has been building for quite awhile. It's taken me moving to a community to actually motivate me to figure out the process.

Dosa's are a traditional Indian food, which fall under the category of 'TLO' (or Tortilla Like Object" - one of my favorite things in the culinary adventurer's toolkit-

Though, in the Dosa's case, it's a blend of fermented rice and various legumes (called dahls in India)

Normally the process involves using raw grains/legumes and taking them through a process of fermentation, then cooking them;

But, I was curious to see if cooked grains could work as well.

We had a large pot of millet left after lunch  (some people still havent learned that it is possible to science out how much food actually feeds a crowd), and in order to not serve the same thing the next day, I thought to experiment with this cooked millet in place of rice.

And wow, it totally worked- the taste was excellent.

Only thing that could have been better was paying better attention to the heat of the woodstove- Dosas want HOT and I accidently let the fire die- It's taking me some getting used to cooking on a woodstove again.

It's my intention to start taking photos of these escapades; Need to work out the logistics of borrowing other comunitards photo devices first.

Your cooking adventures are far out Severian. Makin my mouth water!

Thanks Moonless; I'll try to get photos up here soon.

Today I managed to nail the dosa; perfectly thin, crispy; got the right heat on the stove; I'm seeing a pattern that the first one is a throwaway-

One of the reasons I like dosa's so much, is because it satisfies the organoleptic desire for a bready addition to a meal, without falling into the easy trap of 'WHEAT!".    I've been experimenting with sprouted wheat; and with sourdough- and, truthfully I very much appreciate it;(one could replace appreciate with crave) however, I haven't yet been able to hit a preparation method that fails to produce that feeling of jitteryness and heavyness-  And, on the flipside, the best I've ever felt was when I cut wheat out of my diet entirely.-

From the research I've done, the number of people sensitive to gluten/wheat is way higher than those actually diagnosed with celiacs disease. For a number of reasons.  (Check the book GrainBrain for an awesome primer, or WestonaPrice.org)

It's important to state also, that we  exist in within a culture that possesses an incredibly vague language system; in that, we use words like "Milk" for example; and this can refer to the nourishing, delicious, superfood that comes right out of a tit- AND the stuff that comes out of cows confined in crazy quarters, heated past the point of death, and injected with extra "vitamins"- for our health!.

And so, there is a huge difference between the quality and effects of  refined white flour, and organic, local, grains that I'm sprouting on my counter, which will eventually be dehydrated at low temperatures and then fresh ground into flour using a hand mill.

This difference applies across the board- from Milk, to Meat, to Eggs, to Wheat-  And so, I consider it a perpetual ongoing sidequest to challenge my friends who tell me they have a food intolerance- especially when it comes to Milk- "Oh, I'm lactose intolerant" "Oh are you? Have you ever had Raw Milk Straight from a Cow/Goat?!" Tryyy ittttt.

Ultimately, the mission is to nourish.... and I'm willing to let go of some of the delicious crack treats in order to do it.

One thing I've seen in my journey, (and that I'm still learning) is that it's kind of the default state that most of us have never learned how to actually nourish ourselves- Be this in the kitchen, or with other self care routines.  I enjoy being in a position to encourage those in my community to really see what goes into the process-    And that's just it, it is a process, and this has been forgotten in the convienience-store mentality that most of us grow up with; where food is seen as something to shove into a hole to temporarily silence the voice of hunger;  instead of an opportunity to alchemize together  tiny invisible magical ingredients that the body can use to furthur its unending quest for higher orders of health and well-being.  But, in order to step out of this mentality; someone has to be reintroduced to the proper place that cooking takes in our lives; that of heart, hearth and center- instead of a role way out on the peripheral-

Just look at the traditional cooking techniques we're only just now 'discovering'- It takes days of preparation to make a single meal- With all the sprouting and fermentation, and long and low simmering-

Plus, by setting self-imposed limitations- ; it really brings out the creativity- This is something I'm super appreciating about the limitations of homestead life.

Though, I think I'm going to have to get super creative to figure out how to make one of these fat Japanese pancakes so that it doesnt feel like getting punched in the gut. 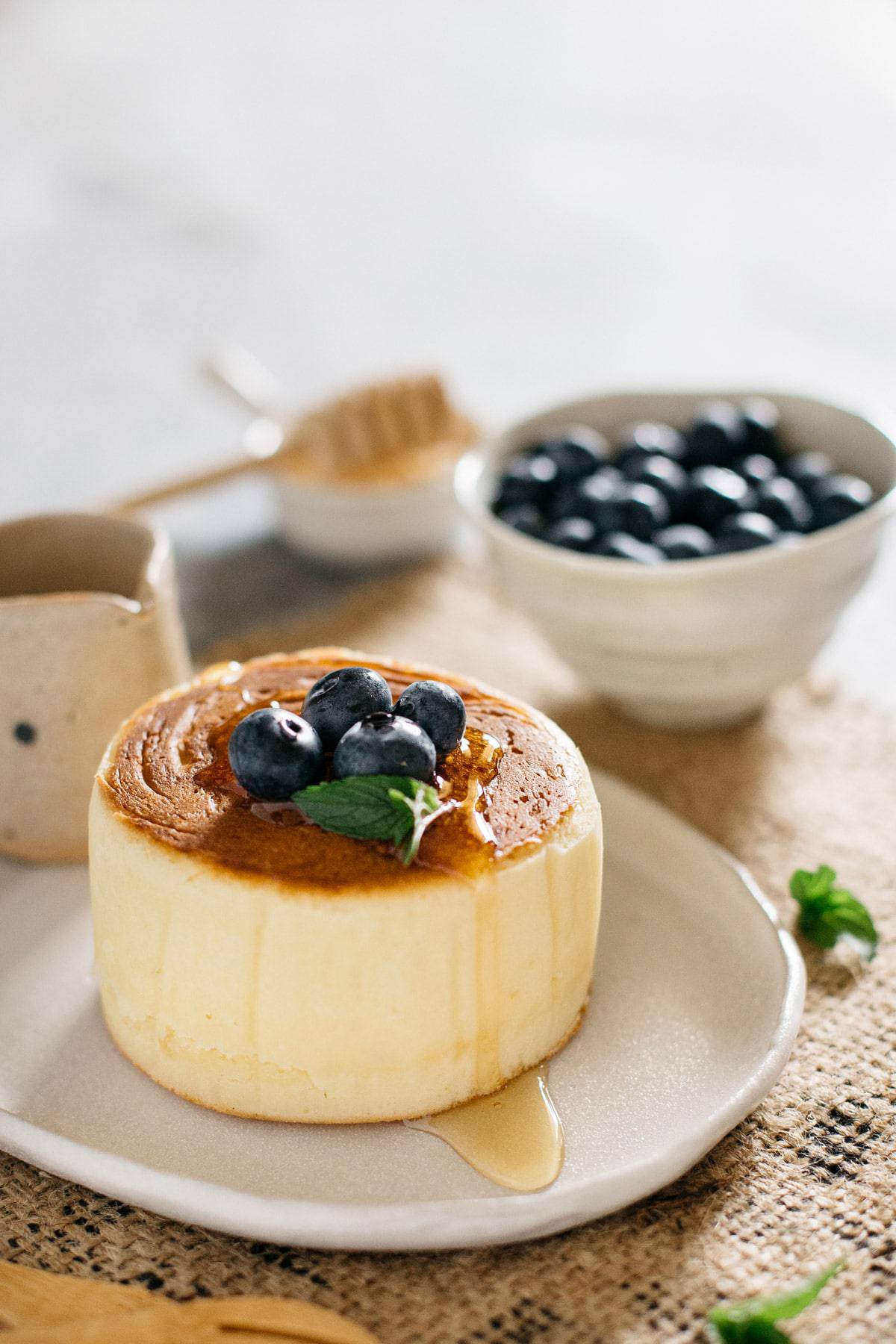 Got a new camera, wanted to share some photos of Pizza Night

Lessons learnt include: cooking pizza in a woodstove require turning the cabin into a sauna- Impossible to work in the summer, though thankfully there was a pond in the front yard to remedy this mistake.

Also- Got to let sourdough have plenty of time to rise! Or add yeast. Got no rise at all from the dough. Delicious otherwise! 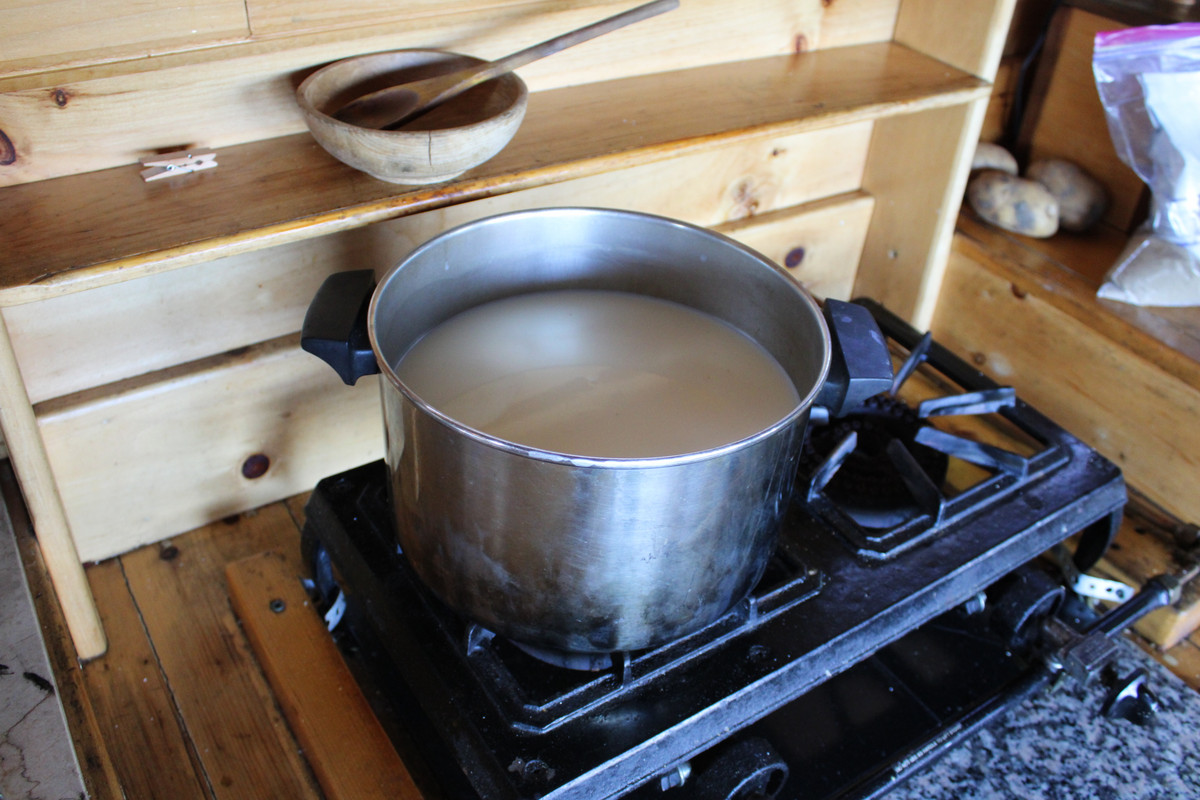 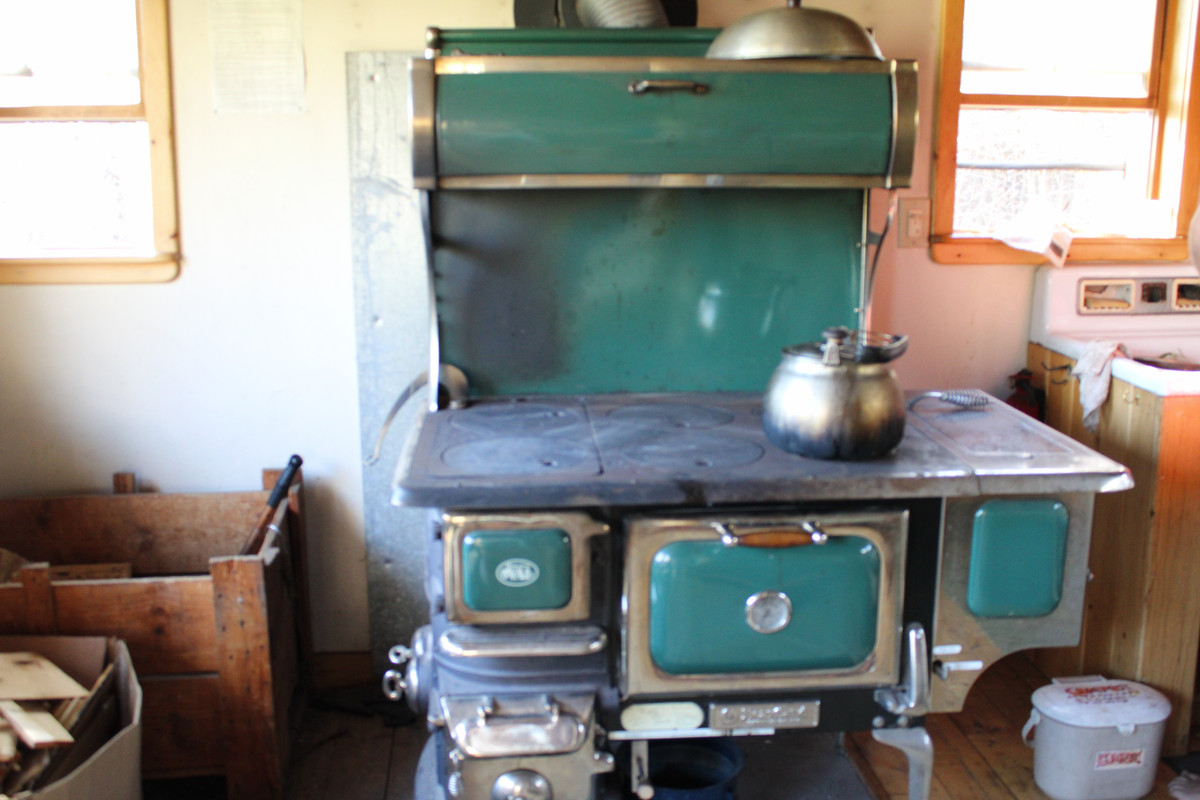 Here are some onions that managed to escape harvest last season that I found when tilling the garden beds. Still good! 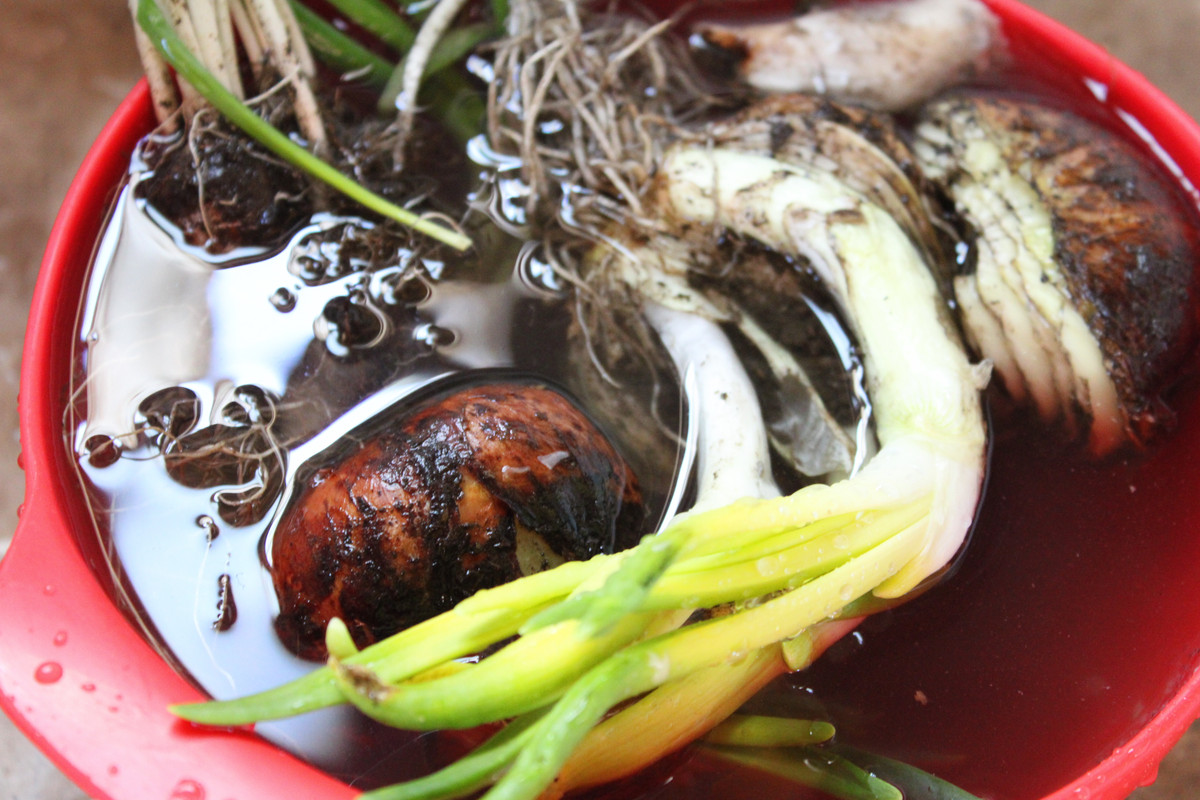 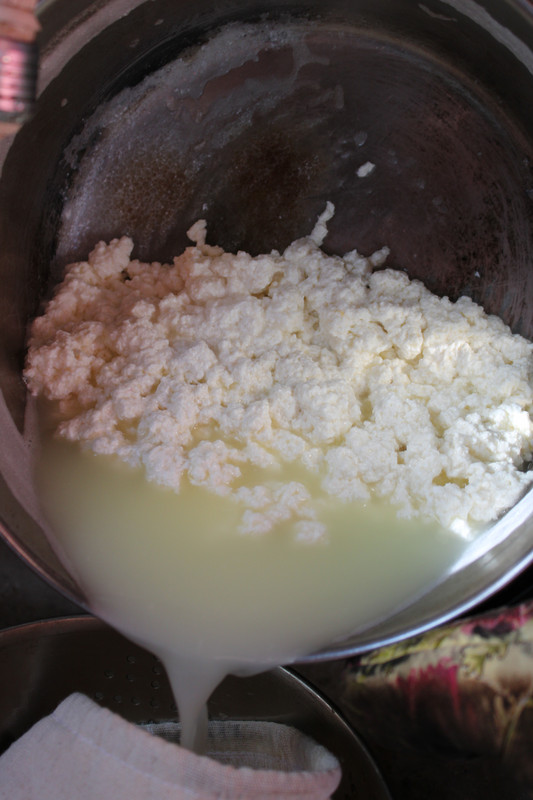 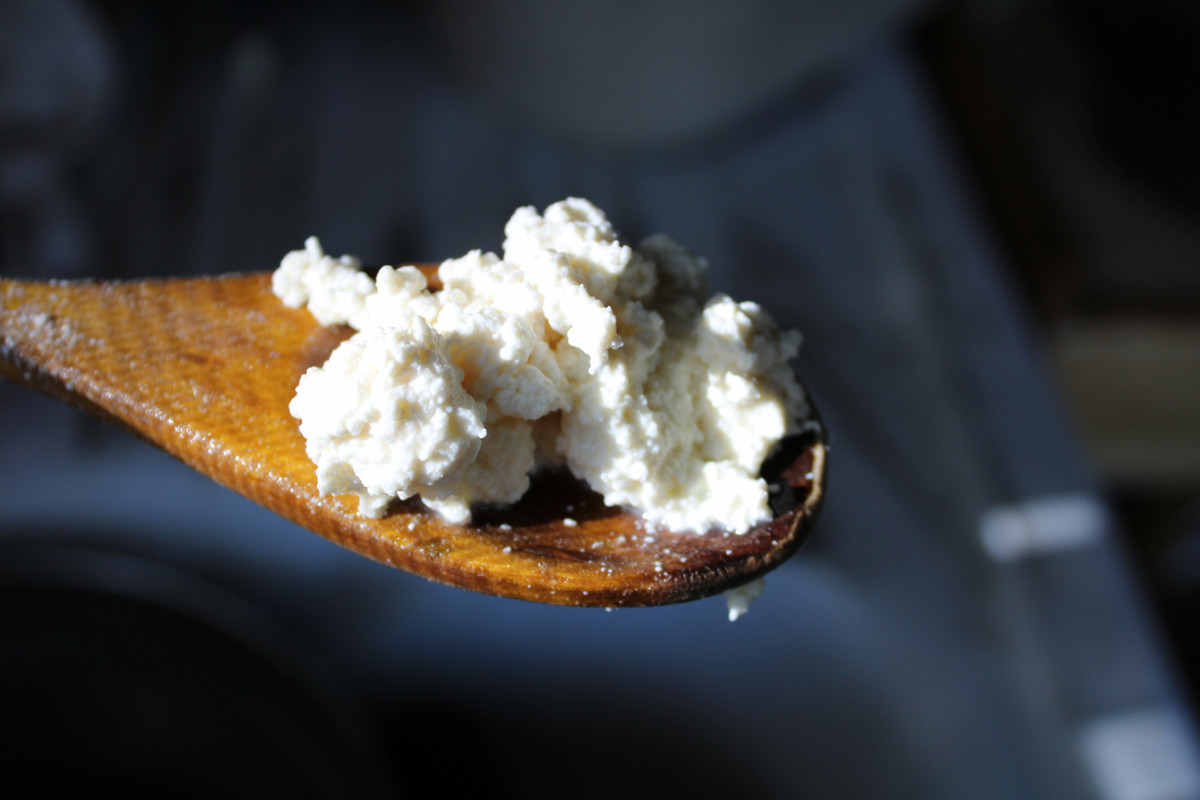 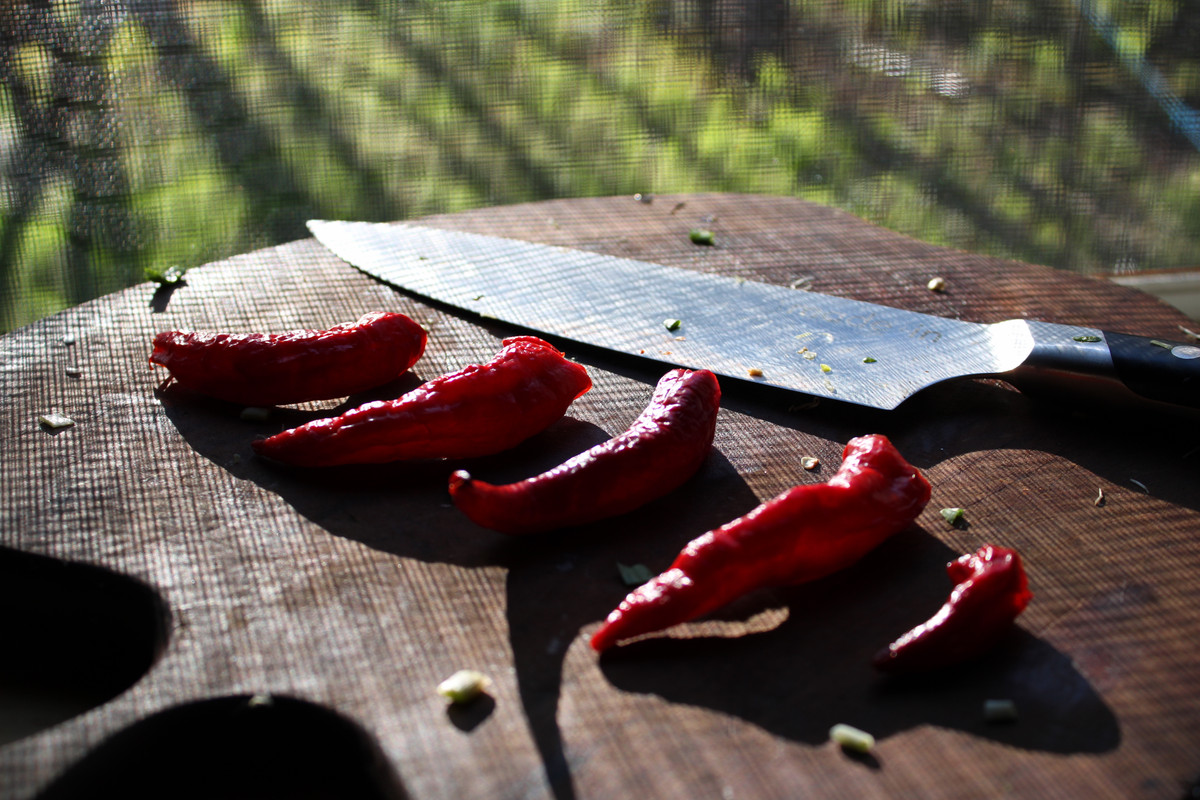 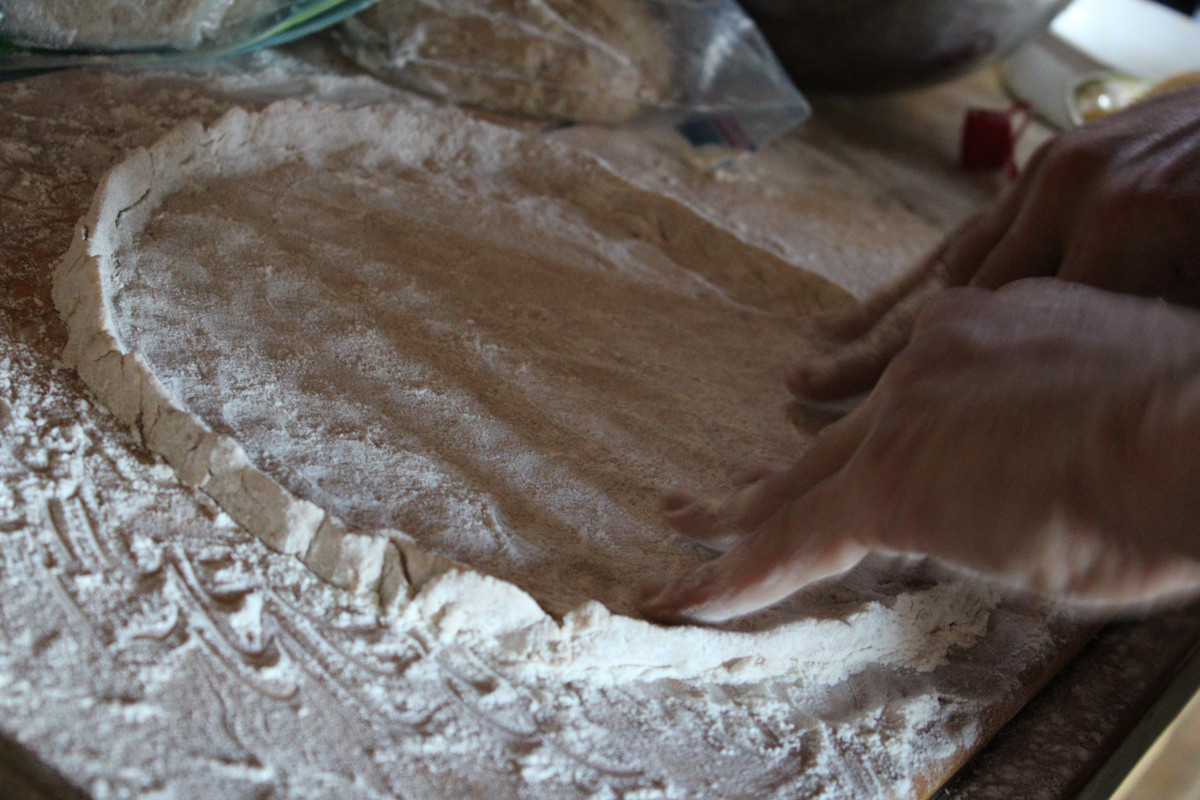 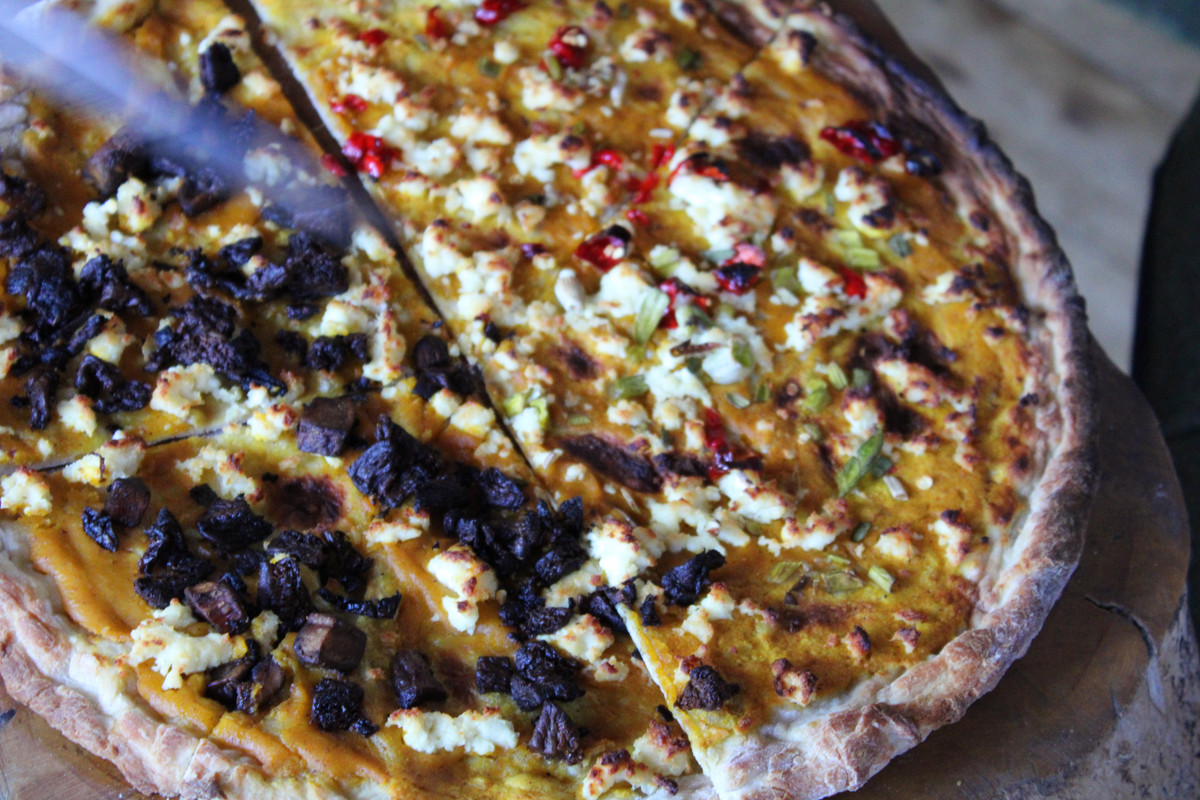