My interest in Morning Glories have been reinvigorated since reading through all the wealth of information that @tregar has been generously providing in some other threads. I thought this would be a good time to take a look at any morning glory plants that my be growing.

I started a few plants by seed in mid/late May. Here’s a picture from June 1st.

A follow up picture from today, June 18. One plant is growing vigorously. The other two not so much.

What species is it?
This is wildvine its native and similar family I'm pretty sure. My morning glories didn't do much as far as returning this year because I built a deck over their little place. I think they didn't get enough sun to get out. I should get some blue ones tho I do like em alot and appreciate the thread. I need to get some seeds I forgot to put that in my garden this year 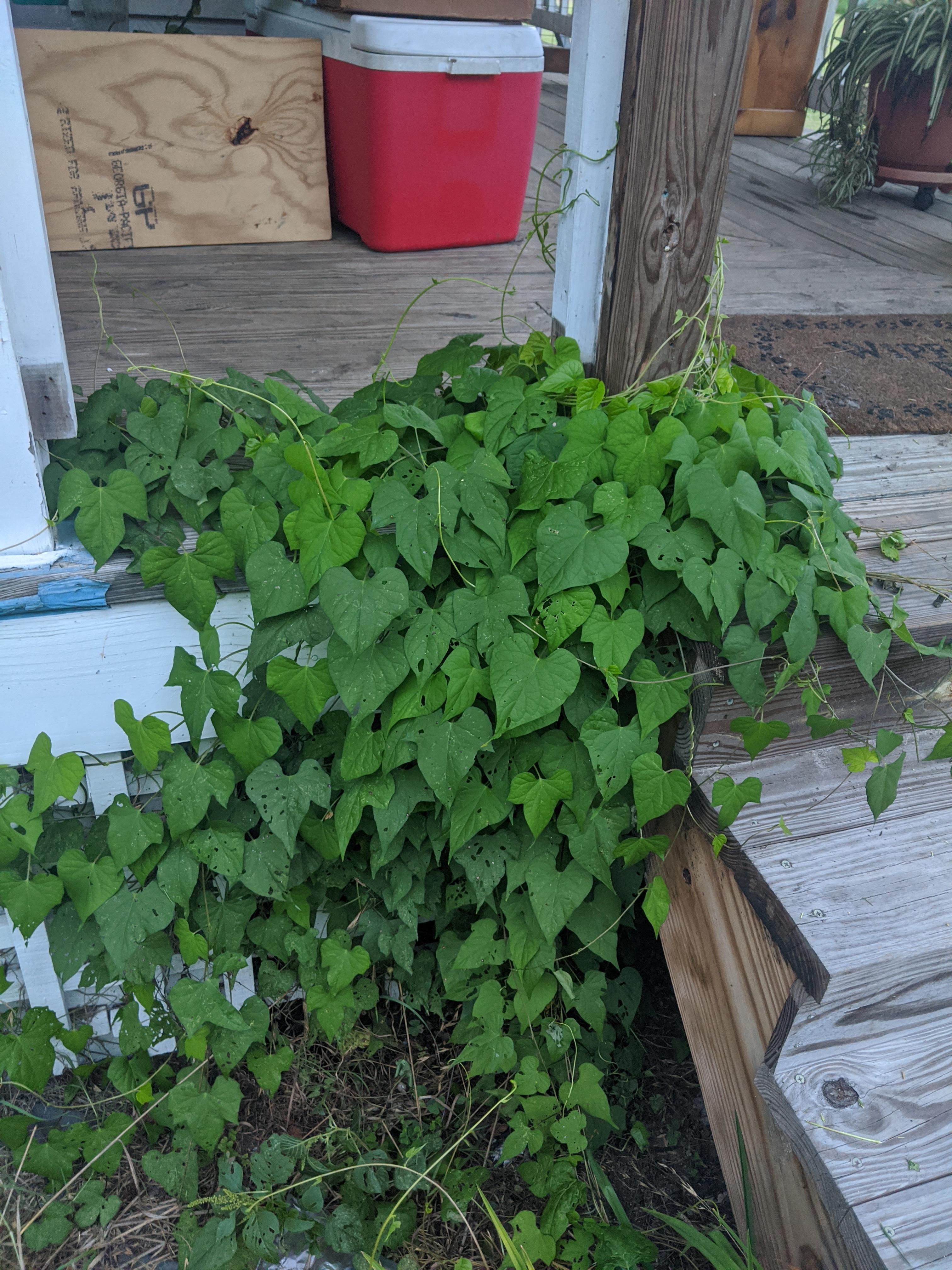 They are beautiful, but I will share this from experience, you want to keep them under control.

Once they have had a few years to run as they please, you will never get them restrained again. Mine started on one little section of wall. They now have done this to three walls in my yard, and my neighbors as well.

Damn that is quite a wall Sky!

I do agree with skye 100 tho. Consider where u place them carefully becuz they run wild and can become nuisance if it's difficult to find manicure time.
Yes that wall is epic fr

They are beautiful, but I will share this from experience, you want to keep them under control. Once they have had a few years to run as they please, you will never get them restrained again. Mine started on one little section of wall. They now have done this to three walls in my yard, and my neighbors as well.

Jealous, wow that is a beautiful photo of walls overtaken by the snakevine!

I would love an unrestrained wall of them

P.S. If you do ever dream with the seeds (see my 2 potent experiences in the thread on "LSH equilibrium stability" here at mycotopia) to remember that LSH (lysergic acid hydroxyethylamide) decomposes in neutral water solutions, and quickly in alkaline solutions, and also if heated, but it is quite stable in acidic environments (just like the solution recipe I give). Traditionally (e.g. as reported from Wasson) they only soaked the mushed seeds briefly in water, then strained and immediately drank. Recall that even Hermes (12g extremely visual MG trip report in same thread) would acidify his distilled cold extraction water with a squirt of lemon juice beforehand.

Researchers from the Polish 2016 study on morning glory seeds found 3x higher LSH levels in fresh seeds or seeds direct from growers (some growers on line have over 350 reviews for their fresh heavenly blue MG). The amount of LSH in the seeds was found in levels comparable to LSA (a decomposition product of LSH) within the seeds, which is astonishing. The new study has increased our current understanding of the seeds. The researchers noted high relative abundance of penniclavine as an interesting observation as well.

Penniclavine has excitory effects on the central nervous system (Yui & Takeo, 1958) as well as lysergic acid hydroxyethylamide (LSH) which also excites the central nervous system in animals & caused dilation of pupils (Glasser, 1961). LSH is very similar to LAE-32 which is described in human experiments in TIHKAL, to be LSD like and stimulating at 1.5mg (1500ug). Albert Hofmann later discovered LSH in MG seeds around 1967 and put colored drawings of it in his book "LSD, my problem child." and apparently told Owsley that it was very "LSD-like".

In the seed embryo:

This is what happens to gnomes who slack on tending my shit. Her husband got the message. 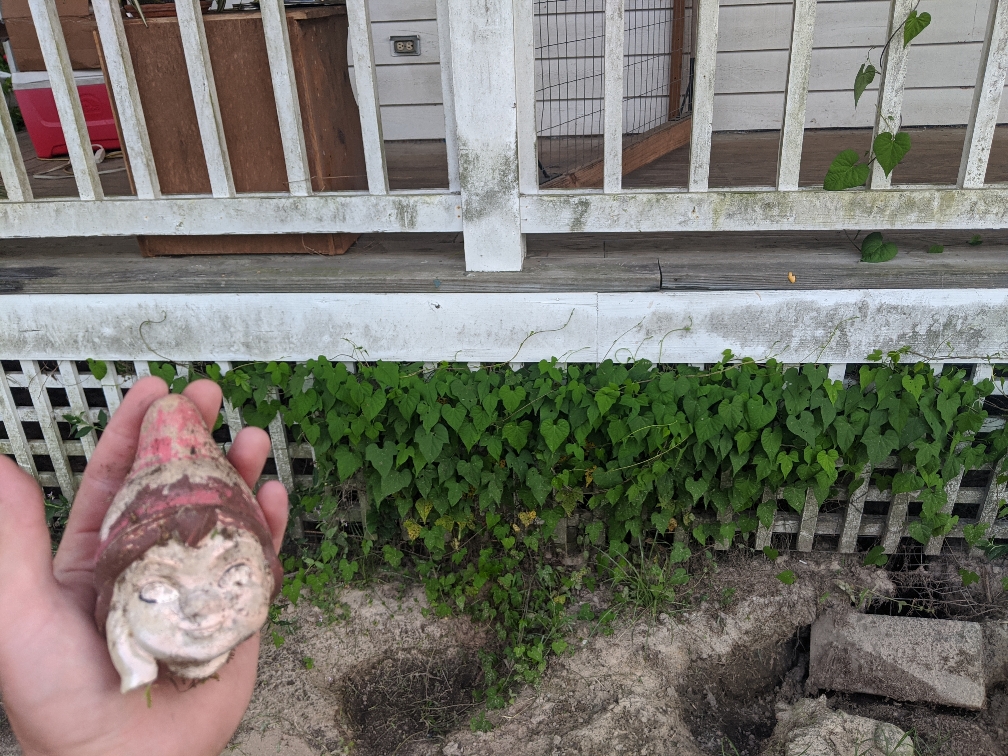 Hahah. Some times you just gat to break em. Lol.

I've got a love, hate thing going with morning glory.   Its a beautiful climbing vine on its own right, and those beautiful trumpet shaped blooms,

It can get out of control very quickly, and if left to its own devices can be destructive to whatever you let it grow on.  Like choking out, and killing other plants, and small trees, to growing behind siding, or into the cracks around window cases

.   Once established it can be virtually impossible to eradicate without the use of herbicides.

I’d like for them to keep coming back. It seems my winters just snuff em out.

Is an easy fix here.
https://www.amazon.c...i_xmv7Eb3B3745G
If the link opens . It just takes them a month to fill a large order but well worth looking into. I hope it's not bad I posted that I didn't think about it. I'm not spamming swear I just like their seeds and thought u would also.

Maybe not likely I had a order ship this morning

My app isn’t working or that link.

Lol, found 5 kg seeds for 149 EUR, that's 167 USD.
Lots of trade in Germany/Austria.
I ordered more expensive ones at my prefered supplier, just for a dose.
Just try to stay on safe territory. Could be that the seeds are covered with a chemical agent or so, I don't wanna make some noob mistakes here.

And the order for the plant I wanted to buy was canceled from the flower shop. All sold out (due to late season).
After all, MG comes from Mexico, should be evergreen under artificial light. I will sow some seeds.

Poland has severe penalties for anyone caught using drugs, some of the strictest in the world. The ONLY good that has come out of this is that it has caused researchers to perform new studies on the plants people take as alternatives, just like the 2016 Polish MG study...giving us new knowledge (just like the high amounts of LSH & penniclavine, both CNS stimulants discovered in MG seeds). People have been getting high or changing their mind-state since the beginning of time, it is in our nature to seek out new & higher forms of consciousness.

I grow fresh year after year (I grow 12 heavenly blue MG plants) and vacuum pack and freeze (to keep their high potency freshness for years) the extremely potent seeds right out of the dried seed pods off the vine in the fall. See my two strong trip reports in the thread "LSH equilibrium stability". I use miracle grow once a month during the growing season and they are monstrous. But here are some current user reviews for a "fresh morning glory grower" with over 350 reviews/with some reviews from reddit group: