I'm curious what y'all think of this fascinating design: 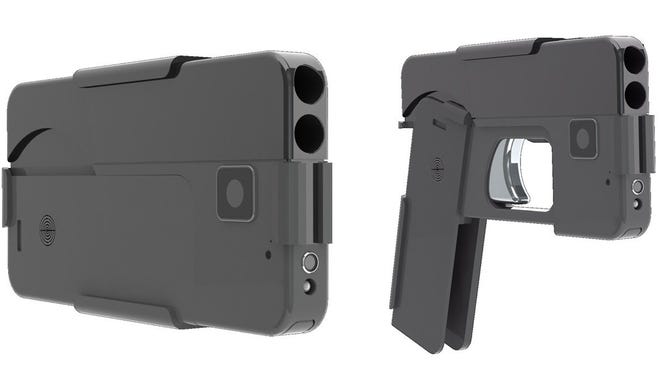 It's probably not actually being 3-D printed (yet), but it's an indication of the kinds of things we'll probably see be developed with that technology. It's been on the market for a few years (I only found out about it recently) and retails for around $600. Caliber is .380, single shot (one from each barrel) striker-fire design so it's hammerless, which is good since a hammer on a cell phone would be a tell that it might not be a cell phone.

It's also an example of what I mean when I argue that technology is making things like gun laws moot. At some point people will be selling thumb drives with the required specs for a printer rather than actual weapons, which means gun smuggling and illegal sales will eventually take place digitally over the internet.

Next time you see someone holding up their "phone" apparently recording something look close to make sure it actually has a screen. Next up will be a revolver that looks like a water bottle, I bet.

I'm wondering if a 12 ga. sabot could be designed that would fire that gun out of a shotgun and then it would shoot the target when it got there.

Oh, and when one of the guys in the video shoots a .50 and says they fired "possibly the fattest kind there is" (among rifles, I guess) I'm assuming he was still unfamiliar with the relatively new, Ukrainian-designed and manufactured Snipex Alligator 14.5×114mm Anti-Material rifle (a jaw-dropping piece of gear to be sure).

I bet is has a bit of kick to it, lol. It's more like shoulder-fired artillery than a rifle IMO. You could hide a micro-pistol in one of the shell casings.

Those Ukrainians are pretty damn good weapon designers, and they picked an ammo that is readily available from their current advisory.  The 14.5 x 114mm round was first developed by the Soviets at the beginning of WW2.  They used it for the PTRD, a single shot, bolt action anti tank rifle.  It's also the round they used in their KPV heavy machine gun (designed towards the end of WW2), which is widely used as the main gun on the BTR troop carriers, and in the quad mount ZPU anti aircraft guns.  It is an amazingly capable, and devastating round.

Can you imagine hauling this thing around a battlefield trying to hunt german tanks?  It's measures in at over 6.5 feet long, and more than 38 lbs.  Not to mention the incredible amount of recoil this thing had to have produced.   But back in 1941 it gave infantry a weapon that could stop a light tank with a well placed shot.

That looks like a giant anti-tank zip gun. From the looks of it and reading about the round it uses I'm guessing I'd probably want a bit more padding at the butt if I were using it. I also guess that it's got a de facto floating barrel since there isn't much else to it, lol.

I just read that 14.5x114mm rounds are not legal to import to the U.S.. That is a big endorsement of how insanely powerful they are.

Yeah, it was built in typical soviet fashion.  Simple, ugly, and cheap, but also sturdy as hell, and effective.

It also was much lighter than many other man portable anti tank rifles of the WW2 era like the Swiss Solothurn S-18/100, or the Finnish Lahti L-39.  Both of which weigh in at over 100 lbs.  Though both of those were 20mm, and clip fed semi-automatic weapons, but they were also much more complex to manufacture, and much more expensive.

Here is an informative video by one of my favorite gun nuts. Ian McCollum, or gun jesus, as he's affectionately known to his fans.