It is known that stressful conditions is one of the factors that force mushrooms to fruit. A recent project was a good example of this.

I had 2 bulk substrate trays in a grow room. One was open to the air and the other was covered with a clear tub.

By mistake, I forgot to check on them for about 4 days. When I did check, the open tray was in trouble. The substrate surface was discolored and getting brown due to excessive air flow in the room. The second tray was covered and had perfectly healthy mycelium.

Once I realized what the problem was, I covered the first tray with a clear tub. I thought for sure that tray was done, but decided to keep it for a while to see what happens.

The results were unexpected. The first tray with dried surface generated massive amount of pins and practically all of them grew to full size. I mean, there was no bare spot left, the entire tray was covered in mushrooms.

The second tray with healthy mycelium generated clean and healthy pins, but probably only 40% in the amount of pins comparing to the first tray.

Both trays has the same substrate, same spawn, etc...

The question that comes to mind: is it worth the risk to try and stress the mycelium to induce heavy pinning?

It is counter intuitive to cause damage on purpose, but it worked beyond expectations.

Does anyone has experience with this?

Haha...since the heat wave I have had plenty of experience with causing my fungi undue stress......thank God the temps are back to normal for the time being.

Stress does not help stimulate a good pinset, a healthy pinset is cause by multispore genetics. What it seems to have happened to you, was you left the bin uncovered which allowed for a abundant amount of f.a.e which is the primary pinning trigger for p.cubensis to begin fruiting.

So of course it did better then the substrate you left enclosed. Besides like I said they were two different Ms genetics to start with.

I just use seran wrap as a humidity blanket across a unmodified tub. P.cubensis are not all that finicky unless you're dealing with only a handful of truley picky p.cubes like pe, ape, plant Asia mystery to name the few.

Same goes for the substrate you used, the substrate can be identical but the pinset wont be unless you started using a tissue clone or proven isolate.

I would say stress causes a lot of pinning, but only a few would grow to full size, whilst others will stagnate in growth.
It appears to me that aborts are caused by genetics though.

Here's a fun story: The other day I was moving my posessions from one place to another, 250 km apart. Took my Ban Hua Thai BRF cake in the trunk of the car. Left it in the car overnight, took out the next day.
And I recognized it pinned whilst having been on the drive in the trunk!

Then I put the cake in a far too dry fruiting chamber for the next 10 days. Lots of pins, a few of them grew to reasonable size, 4 inches tall.
The other pins did not grow anymore after I harvested the ripe ones.

See the following pic below for what it looked like in that early stage of fruiting (side view). 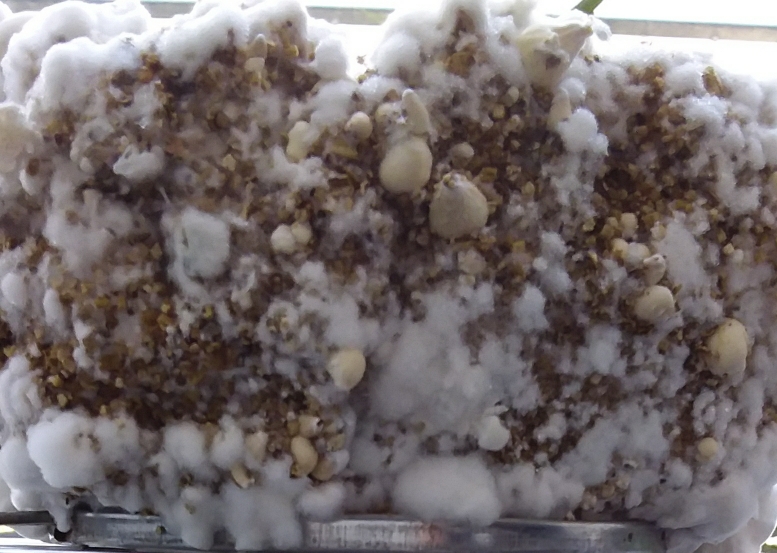 With a BRF cake, at least as I do them, I let it flush one time only, then I toss it. The BHT myc is an agressive one, and it regulary "eats up" the cake so that soon the cake will start rotting. You can see in the following sequence of pics what I mean:

Pic above shows the cake after harvest but with lots of pins left, so I made an exception and dunked for an hour a half-grown set of pins for a 2nd time, causing even more stress to that grow and it continued fruiting.


The cake got stress from that, obviously. It turned blue almost and some mushrooms soaked in lots of water at the base:

I let it sit that way and 5 days later, some tall mushrooms emerged from that cake, 4 to 5 inch tall:

The point I wanna make here is, the cake endured a lot of stress, being shaken and under constant vibrations whilst in the car. Then I couldn't care for optimal fruiting conditions. Then I plunged all pins ito cold water for an hour.

After that I just put in a small tub, closed the lid and opened once a day. Couldn't control FAE because I do that with my ultrasonic mist maker which sits at the bottom and is fanning the Co2 out from the bottom. Couldn't set up all of that.
So my conclusion is stress possibly can stimulate growth.

Nice thread you got going here .
Think about how what your are doing mimics Mother Nature . You got this organism that wants to continue its lineage growing along then bam a drought it’s like “uhoh i’m Dying” then you give it some moisture and then back to drying slowly and it’s like “this is my last shot to procreate” and it goes crazy making sure that it’s going to have spores flying off as much as possible .

I had a stubborn cake one time that I redunked then on one spot I blasted it with a hair dryer for 5 seconds and a few days later that spot had tons of pins forming .

The other” stress” that hasn’t been addressed is when these guys fully colonize the sub they realize there isn’t anything else to eat so they better get busy making fruiting bodies and get off that sub And onto greener pastures so to speak .

This borderline of life and death is what I love the most when observing my grows.  I mean, look at the last pic, this thing is almost dead. And something sprouts out of it, ready to found the next generation. This tells so much about nature!

Since I have used an isolated strain for both trays, the only difference would be in the environment, as one tub was open to the air and the other covered.

The key here is that in the open tub mycelium was dying on the surface of the substrate and I think this caused massive pinning and fruiting.

There were practically no aborted pins and that caused me to think that creating artificial stress could be a useful method.

I am just reluctant to repeat this test with good cultures.

pinning and fruiting occurs as a survival mechanism... It's a dynamic system. There are many variables that can play a role in fruit initiation... The most important, in my mind, is nutrient source. When the mycelium has colonized the available food source it will fruit, plain and simple... If it is fruiting prior to full colonization, its due to competitors or other stressors that inititate a survival instinct in the myccelium..... "oh shit, we are out of food, better produce spores and chill until a new nutrient source is available..." said the mushroom...