65 replies to this topic

The prints I used to make up the spore syringe were defiantly clean, I highly doubt it's a sort of bacterial contamination otherwise my past gt grows would have had the same thing happen.

Is there a known condition called "wet bubbling" ? But even then it doesnt explain why the g.w.m which were also over saturated with water did not develop the same condition as the gt.

I'm scratching my head here, this is truley bizarre to me.

Not wet bubble but that cake is 100% dry bubble (vert)

If what I keep getting is vert wouldn't it have spread to the g.w.m?

Could we elaborate a bit about dry bubble? For instance, anybody has some pics on their hard disk to post?
And is my metastasis-like growth prone to dry bubble since it's wet like a sponge?
I mean it's stupid attempting for finding an answer in a comparison of pictures.
But it would help to see some pics of:
- Wet bubble
- Dry bubble
- True overlay (not on Cubensis, since it is assumed overlay cannot happen with cubes)

This is not true, overlay can happen to cubensis if the surface conditions become to dry, I have some mild overlay occurring in that gt tub I scratched but also recovering mycelium.

Overlay does not need to be discolored yellow, it is the thick dense mycelium that does not fruit. I'll get some pictures of a overlayed cubensis bin some time I'm sure of it. Part of my last gt tub was overlayed but it was also like I said left to dry out.... high temps and dry conditions will cause it in cubes.

What you and I have posted is enough to catalog this darn condition cause I know it cant be vert, its defiantly not a viri and I strongly doubt bacteria.

So far the triggers are what appears to be as previously mentioned. Overly wet bulk material and high temperatures seemingly appear to be the cause and effect.

But yet again, the condition only is appearing in gt and b+ but not the aa+/g.w.m/albinos.....

I'm going to start up some corumba cultures that stencill sent me and see if the condition appears again, if not then we can scratch another cubensis off the affected list.

I miss pink buffalo, they never gave me this kind of headache and always yielded nicely....

So I decided some more pictures would help me drive home the overlay argument.

This is the golden teacher tub after I scratched the surface...

Pretty gross looking overlay but harmless besides inhibiting surface space that could have been used for fruiting.

And heres a shot of the bin as a whole, and yes, I know I've got some metabolites happening but I am sure its just something minor and not the cause of this reoccurring condition.

Notice the mycelium is recovering in some areas? I'm hoping that it has some usable surface space to pin from.

Now here is a shot of the g.w.m which are in the exact same growing conditions.

Perfectly normal growth and pin development for them, they're a weird one to cultivate. The initial 1st flush is always long scrawny mushrooms and then 2nd and 3rd flush is when they become monsters.....no idea why it happens this way for me but every g.w.m grow has had identical results.

Anyways, that yellow shit in the golden teacher bin is dead myc otherwise known as overlay and it came from the myc generated by unknown environmental variables....alphoehi is correct about the sub being to wet but I doubt that's exclusively the only problem....there must be something else in conjunction with it... but what is what I'm losing my mind trying to wrap it around. F'in cubes will be the death of me.

If what I keep getting is vert wouldn't it have spread to the g.w.m?


It might not have spread to the gwm if the print was clean but the vert was still sticking around the grow area, which is most likely did cuz the spores are sticky as fuck.it progresses very fast but it depends when it’s introduced to the grow. It’s much more aggressive if it’s inoculated into the grains, than when it comes on during spawning, or even later. And also tends to affect really aggressive genetics a lot more too. I’m not seeing any dry bubbles in your tubs but the mycelium still looks a little infected. Here’s a good write up on it, the best one I’ve found on the subject.

As a precaution I'll be throwing out the bin that I've been reusing.

The golden teacher tub is pinning around the sides where the rhizmphoric mycelium has climbed the walls. Nothing on the surface as of yet.

I still cant comprehend how vert may or may not be the condition I'm experiencing since like you said stence, it's not bubbling and every other gt grow up to a certain point was done using the same batch of prints I took from a previous grow.... that would only narrow it down to the tubs themselves I guess, oh well. Just picked up another 28lb bag of bird seed, time to get soaking/pressure cooking. I'll be using that corumba spore print for this batch too. We'll see what happens after I change the bin out too....the g.w.m are in brand new totes I bought so they never housed any of the b+ spawn like the two I have already disposed of.

I wonder if bleach is enough to kill any lingering vert spores?

I wonder if bleach is enough to kill any lingering vert spores?

You'd have to autoclave your apartment (just kidding...)

I moved recently and I got rid of trich. Also I threw away my fruiting chamber.

Now I have my first tub going without contamination so far.

It's good to have a reset sometimes.

Regarding the discussion about overlay I realized I feel not qualified to contribute to that discussions more than I did.

I have to prepare more tubs in the course of the year to make my own experiences.

But this thread kept me going it's a good place for sharing different opinions.

The golden teacher tub has pin development in the center mass....its not just pinning around the sides like we had anticipated it to..... hopefully it yields something worth while I'll get pictures as more pins arrive.

The scratch was effective at allowing more surface space for pin development but its pinning unevenly, should be a hell of a flush though.

Heres a crappy picture of the golden teacher bin that overlayed and I scratched with a fork....there are pins growing in center mass but they're still to small to photograph but they're kinda showing.

I'm going to count the gt bin as a win by the time the 1st harvest is in.

So the vert opinion is null. It was overlay due to excess water and high temps, solution is to scratch with a fork.

Thank you to everyone that gave me food for thought with your suggestions and advise. Specially you alpoehi, you nailed the condition right on the nose with your pictures.

Now I need to remember to hand squeeze my bulk substrate to field capacity next time I spawn *face palm* months of epic fails because of to much water....pfffft

This has crippled million dollar commercial farms across the world. It's serious problem.

Have the commercial operations come up with any protocols or ways of dealing with it that seem to work, or at least help keep it in check?


Sent from my LM-G820 using Tapatalk

The pinset is uneven as fack but it's coming in slow and steady. I was about to pitch it because of the vert scare, glad I held onto it to see if the deep scratch worked on the overlay....

The pinset is uneven as fack but it's coming in slow and steady. I was about to pitch it because of the vert scare, glad I held onto it to see if the deep scratch worked on the overlay....&&0){for(var>)throw>

You are right, I don't see any vert but I certainly didn't see any signs of overlay either. I am amazed how multiple people can tell you how rare it is and also provide supporting links and yet your refuse to accept that 999/1000, what is thought to be overlay with cubes is full colonization/consolidation or genetics that grow thicker mycelium... I provided a link that defines overlay and how it is a symptom of casing layers... You arent even using casing layer...

I am not going to comment on overlay with you again, you obviously aren't looking to learn considering you have been provided plenty of links and opinions that suggest you are mistaken.

I don't recall ever seeing overlay with cubes in more than a decade. Other strains sure but it is exceedingly rare with cubes BUT apparently, you get it with nearly every grow and are apparently getting it in your spawn also which is even more ridiculous... Full colonization and consolidation does not = overlay... smh... You can say that you have overlay as many times as you want, it gets sillier every time to the people who know what they are doing.

I thinks its kinda like when you first meet someone and you get their name mistaken, you learn later that their name was different than you thought. Even years later you still get them confused with the original name that you had in your head when you met them.

I'm using a layer of coir overtop of mixed grains and coir....the top would qualify for "casing" the grain.

That would make it a casing layer.

It was overlayed with pooling water like I previously told everyone and when scratched with a fork the mycelium that was on the surface submerged in water turned yellow and died, it would have anyways had I scratched or not I know this from the past projects I had to pitch due to overlay from excess water and raging temperature's. Theres pictures as proof in the first thread, why dont you review them.

It was overlayed with pooling water like I previously told everyone and when scratched with a fork the mycelium that was on the surface submerged in water turned yellow and died, it would have anyways had I scratched or not I know this from the past projects I had to pitch due to overlay from excess water and raging temperature's. Theres pictures as proof in the first thread, why dont you review them.

Those are exactly the conditions of the 1%  minus humidity, I have seen cubes overlay. Maybe there is something there that you have had overlay. But I also see PJ's point too telling others that have aggressive growth they have overlay can be misleading. Also having thick aggressive mycelium, then killing it does not make it overlay.

My NSS that I've been working on is by far the most aggressive strain I've encountered. Would this snow white tub be considered as overlaid? This is a 56L mono with 4L spawn mixed with 10L of coir/verm/gypsum sub and we checked it 5 days after spawning to bulk (this is 5 days..)
We cased it after this photo was taken and it did the same thing but it did fruit.. Just not very well 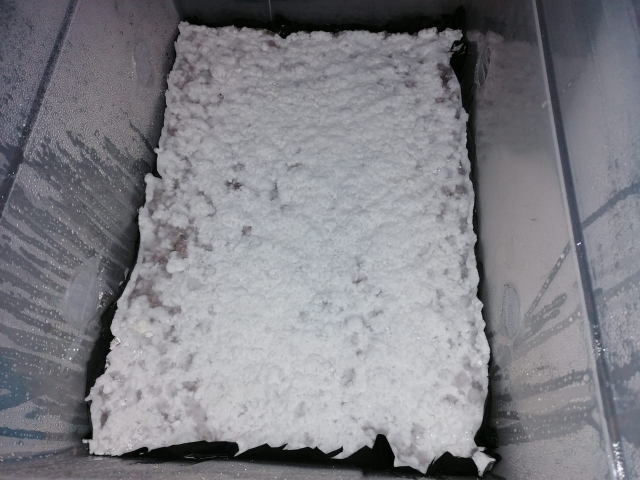