59 replies to this topic

Depressed is the best way to describe it but still moving for us here......

Busier than a one-armed wallpaper hanger here. But we're last in line to experience hardship and last in line to recovery.
We just were getting out of the last disaster - ala 2008 (referring to the banking collapse and subsequent bail-out).

Buckle-up camper. Humanity is about to get to find out what it's made of........

The cold beauty of destruction is a continual rebirth as evidenced around us, IF we pay attention and grasp that our attachments are as temporary as our ego's.......

This requires NO CROSS CHECKING with the "Ministry of Approved Reliability" and cares not what our feelings turn out to be.....

The authority to which I answer is not of this mess nor is it responsible for it......we are watching and navigating....ministries be damned!

There are jobs out the wazoo here and most of them pay shit wages......the "plan" is obviously dark......workers ARE NOT coming back to work......

I intend to continue on as a painful THORN..........and to thrive regardless of the mindless purple pendulum of despair and doom...........

"I reject your reality and substitute my own".

"I reject your reality and substitute my own".

There's a lot of that going on these days, lol. And there's something to it...

I find it interesting that we digitally printed & handed over 3.5 trillion dollars to the richest billionaires who dont need it & meanwhile, almost the same amount has been estimated lost by the working class, worldwide due to this pandemic.  I guess thats what they mean by upward transfer of wealth.

Makes me want to take my cut by force too.  How long will we stand by watching this?  It isnt the police, it isnt racism, it isnt structural reform we need.  Its a mature sense of self responsibility that would allow a cooperative community to function without a corrupt government false flagging us, robbing us, and torturing us in exchange for 'their protection.'  Im pretty sure we can work out getting the bridges and roads repaired without selling our souls, and those of our children.  Got damn oligarchs wrecked the fucking world.

I agree
It is not the police
(But I grant, the bad apples in that profession are potentially more problematic due to the large amount of discretion society has allowed in the application of law enforcement)

They are just working class people like most everyone of us.

I was reading an article talking about how Guyana has done better with covid response that many of the western countries. The media has been telling us that Africa was sure to be hit hardest due to poverty and a racist assumption that they don't know how to govern. Guyana has roughly the same population as where I live and was able to compare the numbers. I thought we were doing well with a low death rate but they were less than half of that number.  It makes me wonder what exactly is the differences in why certain area's were effected more. The media seems to just want to play the blame game on some figure heads but it has to be more to it than that.  One response in that article was the fact that Guyana was more readily prepared due to fighting pandemics of the past decade.

In my immediate area it's around three active cases,  and the second death was just reported in the paper this weekend. So it really does seem like a problem a world away for us when it comes to the virus. We still have all the policy and political bs that comes with it though

A couple guys from work have been getting their kids sent home for blowing their noses or having the sniffles. If you are properly following guidelines that household is now expected to quarantine until test results can prove otherwise. It does seem to be a little aggressive at this point, nobody is following this if their kid does something as simple as blow their nose. The kids get sent home and have to wait for test results, while the parents go out and try to make a living. So the Canadian government is trying to pass legislation that one can claim something like 1000 dollars over a 10 day period to cover the cost of isolation. Hopefully people don't abuse it too much

Have you guy's been hearing whispers that the WHO came out against lockdowns? I thought I should look into it. Not so much the cdc as a whole but there is a doctor voicing his opinions. It seemed to have triggered a wave of doctors around the world voicing the same opinion

“We in the World Health Organisation do not advocate lockdowns as the primary means of control of this virus,” Dr Nabarro told The Spectator.

That same duck duck go search for the WHO turned up this article. Seems that the CDC has some data to back  up their initial assessment that the mask's don't do shit.  Mask's aside for a second, seriously, does anyone think that two foot piece of plastic separating me and the cashier is really stopping these microscopic particles from simply going around them? I guess they haven't figured out how to go left or right yet. When that evolution occurs we are screwed

I am however skeptical of this source, but it seems to be CDC information they are pushing so the data would hopefully be credible.

Experts have said from the beginning, masks are not a tool to keep the people wearing them from getting sick, they are tool to keep those that are sick from infecting others.

I might have posted some fake news, using that report included with the opinion piece was a stretch to come to those conclusions

COVID-19 deaths: https://www.worldome...fo/coronavirus/
Hydroxychloroquineisnothelpfulversuscovid-19, proven again by a study of 667 patients. Hydroxychloroquine can cause heart problems. It does not inhibit the virus in human lung cells – the primary site of infection for the SARS-CoV-2 virus.

Cloth masks do protect the wearer – breathing in less coronavirus means you may get less sick. If cloth masks are used in a healthcare setting, they should be machine washed to remain effective.

Masks are not a substitute for social distancing, but they do help avoid infection. “The data is clearly there that masking works,” Masking also works during air travel.

SARS-CoV-2 can travel via fine aerosols, perhaps even more commonly than droplet transmission, further confirmed by animal studies. So bandanna masks or dust masks offer almost no protection. Here are multipleguides on face mask materials. Gaiter masks/neck fleeces that are thin do not offer much protection, and bandanas/knitted masks are not much better. WHO recommends that fabric masks have three layers: an inner layer that absorbs, a middle layer that filters, and an outer layer made from a nonabsorbent material like polyester. Silk in particular has electrostatic properties that can help trap smaller viral particles. This is true regardless of the indoor/outdoor weather.

Accumulating epidemiologic evidence from this pandemic suggests that when masks are worn, the overall severity of illness is lower. The proportion of those infected who remain asymptomatic is higher, and the probability of dying is lower.

Here is a suggested test for how well you face mask protects other people from you.

I posted this in another thread awhile back, but I think it bears repeating here since it sums up the absurdity of the freedumb fighters against masks: 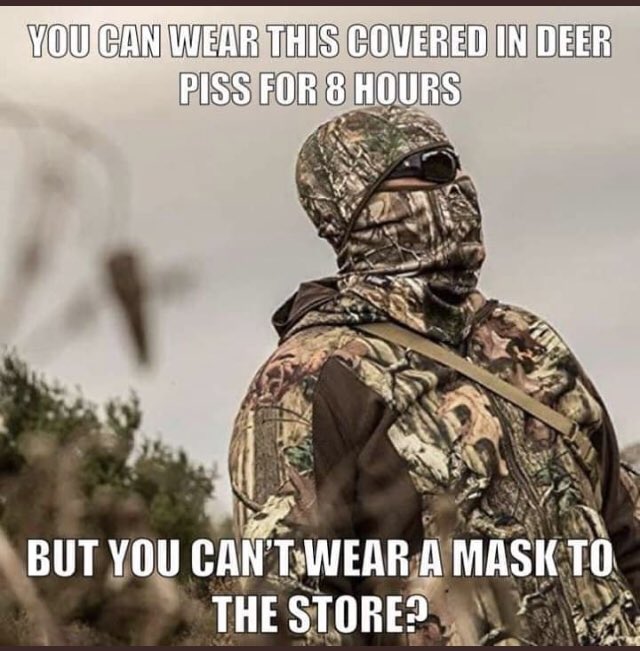 Vitamin D is effective versus covid-19 - despite the fact that covid-19 has been found to be not seasonal, like influenza is. Vitamin D may even reduce the chance of getting COVID-19. Here are studies suggesting that vitamin D may reduce the chance of hospitalization for COVID-19 patients. Here is other studies (and a supporting video) showing a significant effect of vitamin D in reducing the chance of disability and death for COVID-19 patients. Vitamin D deficiency that is not sufficiently treated is associated with COVID-19 risk.There’s no harm in taking the vitamin as a precaution.

Indoors with other people is where one is most likely to catch COVID-19. When the weather outside is cold, heating dries the air, increasing the SARS-CoV-2 lifetime. Indoors is where the 6-foot distancing guideline is especially inadequate. High indoor humidity versus covid-19.

Good nutrition is important for immunity. The high rate of consumption of diets high in saturated fats, sugars, and refined carbohydrates (collectively called Western diet - WD) worldwide, contribute to the prevalence of obesity and type 2 diabetes, and could place these populations at an increased risk for severe COVID-19 pathology and mortality.

The angiotensin-converting enzyme (ACE2) is a facilitator of amino acid transport, and the SARS-CoV and SARS-CoV-2 receptor. ACE converts angiotensin I to angiotensin II but ACE2 catalyses the conversion of angiotensin II to angiotensin and is also the main entry point for coronavirus 2 into cells. Dietary patterns have a strong effect on ACE levels. A high-saturated fat diet increases ACE.

Be slim: Obesity has been an independent risk factor for increased morbidity and mortality following infection with the 2009 pandemic influenza A (H1N1) virus. Now we have data that obesity markedly increases the risk of death and disability from covid-19. This report lists the reasons why obesity, including (merely) overweight, is such a COVID-19 hazard.

As of a few days ago we have one fifth of the world's total deaths and 1 fifth of the world's total cases. I don't agree with everyone here about not locking down. New Zealand afforded its citizens a healthy stimulus. Healthy enough that their lockdown lasted long enough to almost eradicate the virus. 250 thousand deaths is the worst national disaster since WW2. About our leaders.. I think they should all be fired. All of them. Oligarchs have raped our populace while enjoying the laps of luxury for too long.

Plutocracy needs to be dismantled. Anti corruption and accountability needs to enacted as well as an ethics board to reverse the last 60 years of plutocracy driven legislature. People need to be able to afford to grow in a healthy way again. Hiding our heads in the ground like ostriches are what have got us here in the beginning.

I feel sorry for the 80's era people who got coke shoved up their noses by Bush and his freedom fighters so all b of the plutocratic agenda legislation could get setup. Who cares when the nation is all coked out?

I digress.. either by non violent means (passing a anti corruption act in 27 states and ratification in the constitution) or by violent means a truth will be set into motion that people are more powerful than corporations. Rich folks need to be held accountable for all the death and desolation they have intentionally caused. 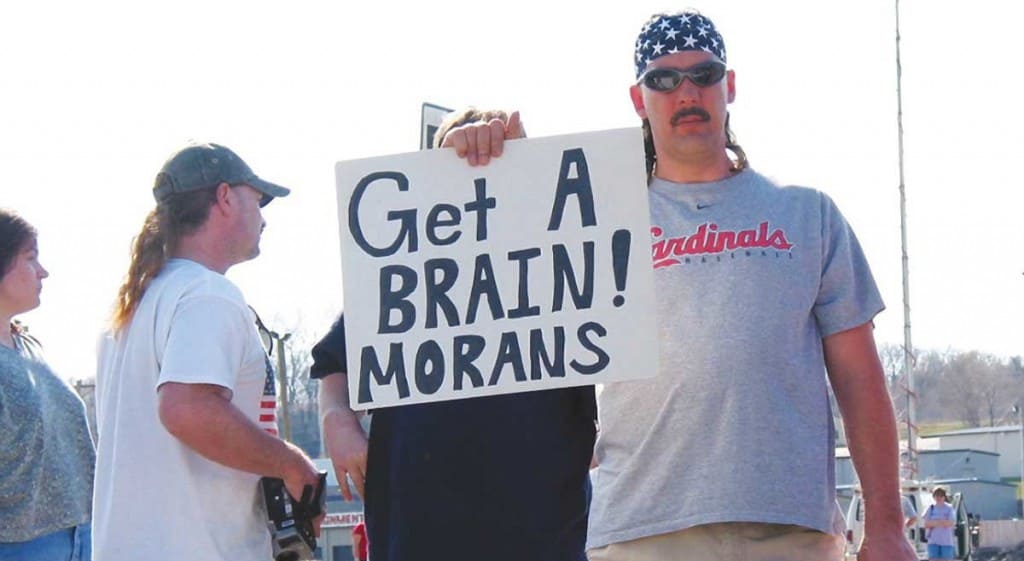