45 replies to this topic

When you put it like that it makes me think I should probably not drive 100+mph anymore.

It was also a bit eye-opening to read (I forget where) that the height of a tsunami generated by an asteroid impact in water is equal to the depth of the water where it hit. That has some mind-boggling implications for impacts over deep ocean, which also happen to be the most probable location for an impact. The deepest parts are over 6 miles (~10KM) deep. Surf's up!

Thats minus the continental shelf variables as the tsunami reaches shore too dude. Its incredible. I did a humanitarian mission to yosuka during the Fukushima meltdown following the tsunami. I seen some wild places in my day but that was one of the wildest to witness.
The force of the small wavelength of impact at sea builds against the continental shelf of the landmass it encounters causing the wave to build. Its speed is slow its mass of water is great. The energy of the impact created by the asteroid isn't an issue until its energy builds on the continental shelf. Anyway ill shutup thats what I'm trying to share tho. Its reverse in that case the mass of the ocean and rise over run allows the relatively medium amount of energy from the asteroid at sea to become a huge wall of water. It is gnarly.
Like where as a rifle bullet relies on velocity not mass. The tsunami and ballistics is like that equation darci is saying like that just opposite . I'm done I just thought it was cool as f u guys know wsup.
I say that in a kind of nutshell tho. There are many underwater topography variables to be considered before bringing E=1/2mv^2 into an asteroid impact at sea and how it plays out when it reaches shore. But I'm just sayin yea quickly it is a good way to observe a tsunami impact. I always enjoy these threads. I need to get back to the what is reality thread but avoid it because ill likely speak too much. Nice thread tho guys I enjoy it!

I found this kind of cool. But its wrong form my b. I'm gonna just stop thinking about sharing the tsunami form right now.
There lol much better. This is what I mean to say.
https://watchers.new...nami_impact.jpg

It's hard to even wrap your head around using orbits to travel around space. And depending on the location of the planet in its orbit relative to the sun it could mean drastically changing the travel distance required between two planets. To space faring folk its obvious but the rest of us just think ya mars its this many kilometers away, yes but only at certain celestial windows when the two planets align in orbit. It is an effect that is lessened due to earth short rotation being a year but when you get farther out there and compare say Saturn and Jupiter it takes a long time to line up. If we ever managed to colonize with conventional technology you would have these crazy decades of lockdown where any travel would just be to far to make any sense

I think.... This stuff makes my head hurt when you really start trying to picture it all

They do deal with real space travel in this comedy series. They have an incident on a solar cruise ship when it goes off course and misses a planetary orbit turning the trip from three months to three years to be able to get back to earth.

It's not just Farout, man. It's Farfarout! 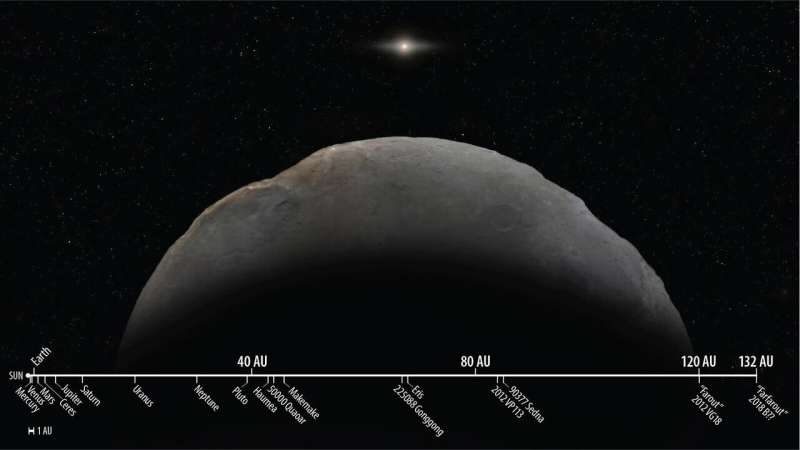 Notice how close Mars is to Earth on that chart vs. all the stuff that's way beyond even Pluto. And it'll be all that we can do as a species to send a human or two to Mars some day (I don't think we ever will for various reasons).

I know your out there planet X,  Reveal yourself

This sort of helps as a visual aid. Seems like they may have ran out of room, or is it planet discrimination leaving Pluto out of that model.

Or a space walk live... interesting stuff out there these days

I did some astronomical calculations and shot a1 gal mik jug full of water hanging on a hook 5 ft from the ground at 270y Saturday. Thats all I got tho. I was proud. Lol. Good stuff tho. I'm interested to see if the new Mars rover produces some new sights from space.
That had been off a 100y zero tho if u were wondering. Yes yes cool space shit ty for it. I enjoy reading it.

I wonder what the members of the Flat Mars Society think about all this "Mars rover" nonsense?

I also wonder if a fear of heights would still be a problem during a space walk. How high off the ground does someone need to get before it won't trigger such a fear?

:lol: thanks I needed that.

Yeah you wonder if there is a similar sensation before they step out of the space station like one would have waiting on a bungee platform. Although at that point you would be floating so without the feeling of gravity all bets might be off

I had to check if flat mars was a real thing, absurd beliefs seem to permeate the internet so why not a flat mars society. Their website seems to be in satire though, anytime you see a Jackalope you should know whats up.

Hmmm and a Pluto unicorn sub society linked on that page. You learn something new everyday

Seems my perception of the planet has changed, the horizon looks more like softer earth colours, like Tanntooie or arakis, or something like that. The weird red sky coloured planet in many science fiction movies is a bit off

"All we ever see of stars are their old photographs"

Video of the future and end of the universe.

The time span is hard to comprehend, butI found this mindblowing.

Entropy the undeniable force that shapes our reality into eventually nothing

The time span is hard to comprehend,

That video goes beyond what our little ape-brains can handle in the first minute and ten seconds!

By the end even god would consider it a horror movie.

By "handle" I mean intuitively comprehend it, like when we plan what we're going to do next week. We have a good enough understanding of reality at the mass and time scales we inhabit to make reasonably-accurate predictions about the conditions and other relevant variables we'll face in our near-term future at those scales (e.g. a 7-day weather forecast, scheduling vacation time at work six months in advance, etc.). But that ends when we die. Well, probably.

The end of our personal time might not be the end of some aspect of us that exists beyond time, and most if not all spiritual traditions (that pre-date the contemporary organized religions that bastardized them) hold that in the world/realm/dimension/whatever of spirit, time does not exist in any sense we're familiar with (or else they conceive of time as cyclical and repeating). This feels intuitively true since being dead/not-existing is inconceivable.


Sometimes it seems like possessing a mind capable of perceiving the apparent reality we inhabit while being stuck in a body that has the relative lifespan of a fruit fly qualifies as a form of psychological torture. Like we exist merely in order to be freaked out by the fact of our existence and our increasing awareness of where we apparently fit within it all, which is effectively nowhere. We certainly won't have any meaningful effect on the Universe no matter what we do, so why bother?


But here's the most surreal part (to me): If we were able to conduct a comprehensive survey of the entire Universe (I thought about this in terms of mass and distance, but it works for time too) then unless we possess a god-like measuring device that has a degree of precision that's presently unimaginable then for all practical purposes we do not exist beyond our own self-awareness and memories.

Just to find our local group of galaxies (much less our solar system, much less Earth, much less any individual human) an entity surveying our Universe would need a measuring device with a margin of error smaller than +/- 0.00000000001%. That's probably doable; our Local Group would appear as a tiny smudge on their chart.

So for an observer who is outside our Universe, if they want to find Earth in it they'll need to be able to detect objects at a resolution greater than somewhere around +/- 1.0x10^-66 %  (or more, not sure exactly since the math gets totally nuts and I got other stuff to do). That means that we, and for that matter even the Earth itself do not exist in any meaningful sense as we would fall below the detection threshold of a comprehensive survey of Everything.

Lucky for us then that we don't have to be observed by others in order to exist. Well, assuming that we're not figments of some unimaginable entity's imagination, I guess.

When all is said and done about this stuff, I'm left with the irreducible and unshakeable sense that the key to everything is memory. Not just observing and understanding everything, but the very existence of everything itself.

Another question I'd like to find an answer to is how do we know or how could we tell that we're not creating the Universe by observing it and remembering what we observe? But memories are not the things being remembered, and if the Universe only exists (as far as we're aware) in our memories then where the hell is it in the absolute present?

Well damn, I seem to be talking myself into a mind-bending version of Solipsism. Or something.

Sometimes I wish I could just be content working 9 to 5, watching TV, and retiring in Florida to chase little balls around on well-manicured lawns as I wait around to die.

haha well said man. I wish I could muster up a better thought out response at the moment

One could make the argument that our personal realities do make up their own universes in a sense. Our bubbles are contained within a larger bubble that makes up the physical world that we are bound by. However those limits seem to get broken in our dreams, and by my estimation dreams seem to comprise of a mass collection of our memories, shifted and morphed into that crazy dream scape.

The expanding universe sure plays against the idea that we are going to meet other intelligent life, but that is based on our current technological advancement. The idea of a human spacecraft that could reach orbit was just as ludicrous a few thousand years ago. What if those traveling aliens had to leave their galaxy as it passed far off into the nothing. Take refuge in another super cluster

I had a half baked thought,  you know the part that we can no longer observe due to the event horizon like effect. Is there a possibility that could somehow be the future, or possibly the past, if it ties together in a sphere shaped motion of time. The fourth dimension we simply cannot perceive.

Shit I don't know, or is this existence just a god wanting to play around in a "simulation" of sorts in order to feel things like pain and suffering, love and joy. Or just a fruit fly buzzing around without any particular purpose other than genetic instructions to reproduce.

Chaos is the true order of the universe