Interest in a Health/Healing subforum?

Curious what type of interest there is out there for a Health/Healing ( herbalism, nutrition, fasting, alternative modalities... etc?)

subforum. If there is enough interest it'd be great to get one made on this board.

What would you suppose we call the Sub-Forum?

I see your point, but it seems to be a more general 'catch-all' then specific to the types of topics I had in mind.

Friend, I think Mikey was asking you what you wanted to call your sub forum, and just showing you where it would be placed.

Nah I really was suggesting that there is already a forum of such. If we get any more specific than that then it will become like the Political forums with people hating on one another over food rather than left or right views. Perhaps if the topic being suggested was more prevelent in the  already in place forum for such, then we could take that success and create another sub in that forum.

Heck, there is not even a pinned thread on the topic atm, Try and get one started and see how it goes? Maybe it can bring awareness to others that Lifestyles is about Healthy Living and Happiness. I do actually question why the Cloud Corner was actually put there, but at that time Vaping was considered a healthier alternative to smoking.

A new subforum doesn't prevent it from being a catch all. Forums that have more activity gets more attention from staff, meaning it gets cleaned up more and off topic clutter gets moved to more appropriate places. Member also self police more active forums and call each other out too. Look at Myco-Lab, That was my inspiration to get more topics of advanced mycology going and to separate the catch all as well. No one reads the the description of the forum wants post stuff using peroxide to hold back contamination like that some advanced shit or something. The only reason its not a catch all is cuz I monitor it and you can't start a new topic there now.

In another sense, I think the overall vibe of Mycotopia minus most of "Counter Culture" is a Health/Healing forum. Just about everything we post in some way relates to health or healing. As much a I like the sound of health/healing  there is nothing preventing a more defined discussion about it currently and getting more specific.

At the risk of unintentionally pissing a few people off. But asking for a subforum to discuss specifically Health/Healing in a Forum that is already about that, seemS to me and this is just my interpretation from being here so long, Is basically asking to have a place for militant vegans, carnivores and trolls to have a new playground to attact one another with the feeling that it would be ok here at Mycotopia.

I also appreciate the opinions here, if you all would like a new subforum, Please jump in and drive the need for one. Post healthy topics and inspire others to do the same. I know if there was more traffic in the forum that we already have, then staff would most definitely monitor it more meaning that the clutter would get cleaned more frequently. 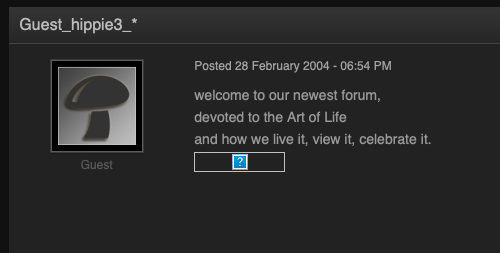