Congratulations On Your Electoral College Victory

It was a good race, fellow Americans, with one of the highest turn-outs in the history of our great nation. Those of you who voted, I truly condemn you; and to the victors, I can only say: oof. ouch. owie. oh hun, you must be so embarrassed.

Nobody can blame me for how this race turns out, I've been advocating cryptocracy for years now. Yes, the person with the biggest BitCoin wallet should run the show (*cough* John McAfee *cough*). I voted Yeezy, anyway. I was really hoping for a sequel to My Beautiful Dark Twisted Fantasy, dropped from the White House, featuring Secretary of the Treasury Kim West, Secretary of Urban Development Nicki Minaj, and- of course- Surgeon General Dr. Dre, with features by BoJo, Lil Trudeau, and Tha Immaculate Merkel.

I'm not going to be happy until POTUS releases all UFO material (including which planet Elon Musk is from), until POTUS legalizes shrooms, and until POTUS personally invites me for a beer.

I don't know where you're located, but here's a list of mental health facilities in the US.

I don't know what you're trying to imply, but I resemble it.

In that case, I've been wondering where to post this

Let's get this over with

The Electoral College votes December 14 this election cycle and a joint session of Congress will count and certify the votes on January 6, 2021.

On the second Monday after the second Wednesday in December, electors convene in all 50 states and the District of Columbia to formally cast their votes for president and vice president.

They then send certificates of their vote to their state's chief election official (in most but not all states, this is the secretary of state), the National Archives, and the current President of the US Senate.

The sitting Vice President, acting as the Senate president, presides over a joint session of Congress to read aloud the certificates cast by the electors representing all 50 states and D.C. in alphabetical order to finalize the vote count.

I'm pretty sure, like high 90% sure, that Biden has legitimately won this election. All power to him. I hope he proves to be a competent, courageous steward of the union, and I look forward to the next four years of excellent memes.

Who wants to place bets that Biden won't end the war on drugs? I made good money on Obama's 2nd term and Trump's presidency with this bet. Nothing against the man, personally, it just doesn't seem to be something an American POTUS is going to do, for whatever stupid reason.

Depends on how far we can pry that Overton Window open. Or smash it, if need be.

It's going to be interesting to see how disruptive ending the War on (People With) Drugs will be economically since it's an entire industry unto itself, with untold numbers of jobs that are directly or indirectly dependent upon it continuing. Good thing all the newly-unemployed cops and prison guards and assorted support staff will have many more choices of newly-legalized drugs to resort to to help take the edge off of being unemployed.

Unfortunately law enforcement resources and personnel can't simply be shifted over to focus on crimes that have actual victims since those types of crimes are almost never profitable to investigate, and generally take different skills and equipment to pursue.

If drugs are ever legalized it will be because a new way has been found to accomplish what Prohibition has been doing for the status quo over the past century or so. 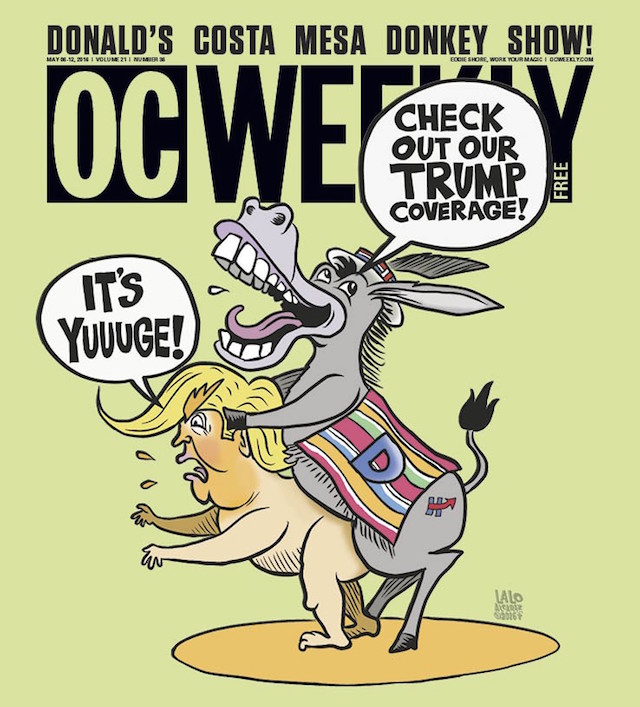 It's an old cover from the 2016 election.  It seems it's more fitting now then it was back then

And you're absolutely correct, it's about as sophomoric as I can get with my humor.  It is rude, crude, and unfit for sharing with most decent people...., but I still think it is funny as hell :)

Thank you for not feeling I was attacking anyone personally by sharing it.

but I still think it is funny as hell :)

It objectively is funny as hell. That's just factual, scientifically confirmed, damn near a mathematically perfect statement. That's good shit and I (dis)approve of it bigly!

That cover looks like the same style Charlie Hebdo is famous for. It might be arguably "immature," but really what the fuck has "maturity" ever gotten us? Bored, maybe. Fewer arrests, perhaps. But is it worth it in the long run? I don't know, pull my finger if you want to hear more...