I'm really interested to see what PE/RW will look like.  F2 is likely to give you a mix, right?  You print/take spores from a fruit that looks the way you want?

But I should know a lot more in 2 weeks time.. well actually, even sooner because of the sandwich baggie

can’t decide if I want to kinda patch the breakthrough areas yet or not.. might try a late, thin top layer around knotting. My pea+ f1 clone loved that.. it would lightly colonize the late layer but really encouraged pin formation.. I got really poor fruit development when the fruiting surface was bare.

Anyway, I digress.. gonna play it by eyes and see what they look like in a few days

The 2 Pea+ f5 qts will be ready to spawn tomorrow. Really excited for these.. this will be the first larger tub of pea+ in the later gens. I’m hoping they’re less finicky than the f1 clone I was working with from that half and half tub above ^^^ and little to no white fruits

The f5 cakes are just about done (1 has a tiny bit to colonize on the very bottom.. I’m expecting knots on the top any day now)

The PE/crs F2 glc 4oz rye jar is almost colonized.. I shake these little jars about 3-4 times (when they’re started from spore). as soon as I see a small colony set in, I’ll shake it every 2-3 days.. that serves 2 purposes: 1. It really speeds the process along and 2. It lets me know if they’re clean or not… if there’s anything hiding in there, it’ll show itself or if it’s bacteria, it won’t recover quickly after that many shakes. This guy looks to be clean enough to send to qts (the final shake was 1.5 days ago) 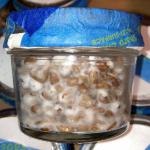 I’ve got what looks to be white pins coming in with regular pigmented fruits in rye PE/apeu f2 baggie.. I’m excited to see what pops up next and the 16qt tub

I don’t think I’m a fan of the compression for PE.

The one little tiny type A part of me kept patching for almost a month.

I don’t see pins or knots so don’t think I’m growing in vitro which has happened with a late case.

I’m going to leave ‘em be. They keep colonizing the top coir in a day. Not sure why but I still really want to patch and even out my surface. It’s almost an inch higher on the one side. Gonna be a terrible flush…

Yeah I’m just trying it but man that’s too much CV for my liking… I’d rather use that for spawning to. I don’t mind pasteurizing and it uses way less peat

Things are looking up for calling these crosses/hybrids.. I’m really excited for the tubs of each.. the PE/RW is starting to pin and the pe/apeu is right behind it with knotting. Stoked!

I have a tall 1/2 pint of the PE/apeu as well that is pinning.. it has two pins and ones a Lucy and ones a normie

I think I recall Coorsmikey talking about only casing half of a tub to see how big of a difference it really made. Not sure what species it was regarding though. Time shall tell eh?

PE/apeu F2 about 2 days behind that

I’m confident calling these hybrids already just based on the diversity in the mini F2 grows.. the plan with the PE/RW is to get a PE looking fruit (pigmented) with rust spores.. something in me says that the pigmented fruits are gonna be more potent than a white fruit, even tho they look cooler lol

The 16qt of that is probably going to start fruiting in the next 4 days or so based on the baggies and I’m really looking forward to that.. I think it’s gonna be a nice tub.. should give an idea of what pea+ is gonna end up looking like when I release it. I might cross it back to PE after f7 to see what happens

I inoculated 2 PE/crs F2 cakes yesterday with some GLC so they should move fast. I inoculated 2 cakes a while ago with SS from a swab but they aren’t moving very fast so I’m going to do a myc pull from some nice colonies on the cakes and put those to 4oz grain jars. It works really well.. I’ve done it a bunch of times and recently did it with a RW cakeI had that I got impatient for. I’m basically using a pf cake like someone would use agar

Use those for glc and bam, cake wasn’t useless and I’ll probably have fruits from those before that cake would have eventually flushed lol

PE/RW F2 bin.. pretty clear now which GLC grains I used for the qts lol. Oh well.. I actually got what I needed from the baggie grains that I didn’t use for the tub so the tub is just a bonus.. there’s still some Lucy fruits sprinkled throughout and I think second flush is gonna be better pickins.. I’ve also got a couple cakes of these that I used SS with so there’s gonna be a ton of diversity in those

PE/apeu f2 bin.. not as good a pin set but a ton of diversity to pick phenos from

That PE/RW is looking Wonderful and is going to be a GIVER!

I think I recall Coorsmikey talking about only casing half of a tub to see how big of a difference it really made. Not sure what species it was regarding though. Time shall tell eh?

Sorry posted all over the place and was looking for you. The 1/2 with the thickest case is pinning. The lower side with less case, NADA. (not what I figured).

I'm going to copy this over to the proper thread.

I see just a couple of leucistic mushies in that PE/RW tub.  Enough to prove the cross and provide a jumping off point for the next generation?  How are you feeling about that cross so far?


I think I recall Coorsmikey talking about only casing half of a tub to see how big of a difference it really made. Not sure what species it was regarding though. Time shall tell eh?

Sorry posted all over the place and was looking for you. The 1/2 with the thickest case is pinning. The lower side with less case, NADA. (not what I figured).
I'm going to copy this over to the proper thread.

Not your fault man.. I’ve got too many threads I post to. Lol. I get a little frustrated myself

I see just a couple of leucistic mushies in that PE/RW tub. Enough to prove the cross and provide a jumping off point for the next generation? How are you feeling about that cross so far?

I’m glad you asked and I was waiting for someone to point out that the tub looks really uniform for an F2 gen. The answer is yes.. where I really saw the proof was in the F2 baggies…

I made 2, 4oz GLC jars from my f1 print jar… I’m constantly trying new shit when I get an idea (I think about cult constantly like a facking mycopath lol. But that’s always helped me grow as a grower) normally, I’d wait until about 30% colonized to shake them like I’ve always done but around that time, someone on the shroomery was talking about how they shake their qts like 3-4 times to speed things up, so I decided that when I saw a small colony to start on one of the GLC jars (about 1/2 the size of a dime), I’d shake.. then when that jumped off to new kernels, I shook again… did that 4 times and it did make them finish faster but what it also did is limit the amount of sub strains in the jar.. the only intention I had was to speed up colonization and then I didn’t keep track of which glc jar I did that to. I obviously used that jar to inoculate the 2 qts for the 16qt tub…

The other glc jar I just spawned in a baggie and that’s where I saw a lot more diversity:

Here’s one of the PE/RW baggie 2nd flush.. they all dropped purple and the 16qt dropped rusty

^^^those guys have a very PE look to them.. bumpy caps and cap shape

It could still be a RW revert but I’m confident it’s a cross. I have 2 PE/RW pf cakes just about ready to birth (they’re just consolidating) and they’ll give better clarification because of the inoc points and no shaking.. I’m excited for them.. they colonized great and even colonized the bottom of the cake (that almost never happens with the tall 1/2 pints)

It’s hard for me to believe they’re not crossed based on past experience.. here’s the PE/apeu tester jar I did.. some fruits even have both clear and purple spores and the classic PE stem bumps are there

So there’s no doubt in my mind about that one and pea+ and the PE/crs I’m confident about.. so odds are good based on what I’ve seen from PE/RW so far that’s it’s indeed crossed

And so I have it in this thread, here’s the money shots of the PE/RW 16qt

Chopping down the PE/apeu f2 16qt. They’re short but extremely dense.. cloned a fruit that’s producing both clear and pigmented spores like above ^^^

Here’s a PE/pfrs f1 clone from last year that I resurrected from dried out grain.. made a 1qt 1:2 CV ziplock that’s about to start pinning :). It’s producing purple spores but they’re not dropping.. they’re theeck lol

Wow, lots of variety in that PE/APEU tub.