You should add that to your tek index.

My gypsum is tiny little spheres. Think it would be worth food processing/coffee grinding em?

Yeah I think that would work fine

Daily dose of dick comin at ya.

Second tub is gonna be real nice, but I wouldn’t kick either out of bed for spilling crumbs :)

The big guys on the right are sucking that side of the tub dry lol.. probably going to throw some water down between the liner on that side

Here’s a little tip for making about a quart of coir/verm (I had to make some today for a couple small subs for printing and cloning:

So i think this’ll be useful to some ppl because sometimes I only need about of quart of CV for a top layer or or just need some CV material to make a small sub for printing or clone material (literally what I’m doing right now) you can make about a quart of CV with a really easy recipe:

I use a plate to press down firmly onto the CV after the water is added and mixed in for a good 30 sec.. this helps evenly distribute the water and keeps clumping down right from the get go (for the full 650g recipe, I use a cutting block that fits perfectly into the rectangle cooler that I use to hydrate)

If you need more than a quart, it’s really easy to adjust because of the round numbers.. 1.5qts:

I also had a big breakthrough with cloning today... so early last week I was cloning some fruits and I had an extra sterilized 4oz jar of grain so I decided to try something I’ve been wanting to try.. a josex poke (method of stabbing colonized agar plates with a syringe needle to grab some tissue cells to squirt into LC by opening the LC jar in a SAB developed by an OMC member named Josex) of inner stem tissue through a SHIP. I wrote it off as probably not going to work.. Just checked it and I’ll be a monkeys uncle.. it worked! Someone else on topia recommended it.. let me see if I can find who.. ah yes Bezevo did.. right on man. 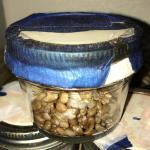 If I can clone that way, it’s going to change my life. Idk why i didn’t think it might not work lol.. I guess I thought it wouldn’t be enough tissue to get it going but I’m pleasantly surprised by myc yet again. Hopefully I didn’t take too long to get the sample (had to jab it a couple times before I saw some in the needle barrel).. BUT like josex said, I probably don’t need to see the tissue because there’s multiple grains in the jar with myc starting so I’m thinking a few tissue cells are all is needed.

This is a life changer for me if it works out.. if all I need to clone fruits is a jar like above and sterile syringes.. I can prep a ton of those in one pc run before a flush comes in in anticipation for possible clones and have one in like no time

I’ve already got how I’m going to streamline it from here on out to make it just as clean as any other inoc I do:

1. Wipe the SHIP with a piece of iso soaked PT, leaving the PT covering the SHIP after I’ve wiped it a bunch

2. Take the fruit I’m going to clone and lay the stem (cap removed) on the jar lid next to the PT covered SHIP

5. Squirt some water out to cool the needle (do it right next to the area to be stabbed)

6. Do a quick couple of jab and twists of the exposed inner tissue

7. Do 1 last wipe of the SHIP and inoculate

Should be done in a matter of seconds

Sick dude! Thanks for writing those teks! I think gonna be giving that clone tek a try next, cloning is definitely a game changer lol.

Yeah, it’s probably not that big of a deal for ppl that do agar but for me to usually clone, I have to prep an oven bag in the pc with a small plate and 2 jars of water (I use an updated version of my oven bag cloning tek using sterile water instead of H2o2) and there’s only room for one oven bag in a pc at a time and have it ready etc. it’s a facking hassle compared to the poke. I missed the first pea+ cloning because I wasn’t ready, but if all I need to do it have a jar of grain and a syringe ready (I can make a bunch of those at a time in one PC run like when I have a tub starting to pin that I know I want to grab clones from), it’s definitely gonna be myco-life changing.

Why don't you use agar?

I got pretty lucky, I just opened up a new sterile scalpel blade, and cut the stipe lengthwise and took 4 pieces out and just put them into the jars. All done in front of a hepa filter tho, but no extra sterilizing what so ever, just clean precise work. The hepa filter does wonders tho, they are very under rated. Even better without having to open the jar lids tho, so this tek is a must lol.

I don’t feel confident using a SAB for agar and I don’t have a hood but otherwise I would.

Thin layer popcorn "agar-esque" jars are still one of my favorite Fahster-TEK tools! You can flick a single drop of swab spore in the middle... Then colonize, observe and if clear make GLC and/or G2G...repeat, repeat, repeat.

I don’t feel confident using a SAB for agar and I don’t have a hood but otherwise I would.


I use an SAB for everything. Only huge bags get sketchy, but it still works if I l take my time.

Obviously you do amazing work without agar, just a nice tool to make sure you’re clean.

Yeah.. just being able to dry the grain (I use rye now instead of popcorn.. the smaller grains are more reliable as far as getting clean in the pc) out for storage and then to be able to come back in 6 months and simply inject the dry grains with water and shake and then retrieve the water to revive the culture, makes it more valuable to me than agar. I’m not very picky so I don’t need to isolate beyond finding a good clone to rock.

But I also know that if I started doing agar, I’d love it.. I’d get stuck down a rabbit hole real quick lol.. I love watching myc grow.. even more than fruit honestly.. so amazing in it’s simplicity and efficiency

I also just started injecting water directly into the swab pack and massaging the tips to release the spores into the water and then sucking the water back out (a small amount—like 2mls) to make spore solution (first I injected some water from another syringe and sucked it back out right away to “clean” it)... it makes a small amount of spore solution but it’s enough to inoculate the three 4oz rye grain jars. I haven’t grown fruits from it (apeu) yet but I inoculated 3, 4oz rye jars and they colonized beautifully

(The two pesa are from a dirty print (that’s why I prefer swabs over prints.. like a lot) that are bacterial and I’m just attempting to get a fruit or two for a clone and new spore swab)

I figure, between those three methods, I should be able to get some kind of fruit to clone and swab to further the variety. Based on how the grains looked on all three jars of the APEU, I’m betting they all fruit... also did the same “injecting sterile water straight into spore pack to make spore solution” method to a swab pack of the PE/pfrs purple spore dropping cross I swabbed a week or so ago.. this guy.. also made 3, 4 oz rye jars, yesterday... so we will see how that goes :)

I been doing a hybrid of the two for quite some time...

But I also know that if I started doing agar, I’d love it.. I’d get stuck down a rabbit hole real quick lol.. I love watching myc grow.. even more than fruit honestly.. so amazing in it’s simplicity and efficiency

Agar gets out of hand quickly and a lot of the different varieties of mycs grow differently. (like lions mane on grain people don't notice till it's fruiting, but on agar it's fractals and fruits)

Transfer 1's headed to baby jars of grain and LC.

The PE T0 doesn't seem to care about the 1:5 grain water I made. It already attacked the grain though...

I need to try this glc out sometime.

I been doing a hybrid of the two for quite some time...
Make small agar jars
Inoculate & colonize
Observe, transfer if desired
Add sterilized grain
Colonize, observe
G2G the col'd popcorn  or inject water to make GLC
Repeat often
It makes a small jar into a mini-mycelium factrory!

You’re already 75% of the way there, rocky... just add a SHIP and there ya go haha

Think the bottom watering helped with this guy

Just threw some water down both sides of this one

The second half of that tub of bigguns

I’ve cracked the lids on these and will probably pick tomorrow.. I’m sure I’ll post one last shot of each ;)

Your house must be stuffed to the gills with mushrooms by now. :)