I'm returning to the cultivation hobby after an extended hiatus - about 15 years. I've run into my first issue, although hopefully it's just a bump in the road. A month ago I made up 6 quarts of rye berry spawn and a dozen PF tek jars using some rye berries left over from 15 years ago. The grain had been stored in a sealed 5 gallon "Homer" bucket in the pantry and was ggod stuff when last used 15 years ago. It still looks fine. I pre-hydrated the whole grains for the quart jars and also used a coffee grinder to make rye flour for the otherwise standard PF cakes.

Long story short: the old rye berries didn't hardly work. 1/2 the PF jars didn't have one 'noc point germinate (out of 4 inoculation points per jar) and 1/2 had 1 or two take with weak growth. The whole grain jars, same story, 1/2 did nothing with the other half appearing started but stalled. No contamination either. Jars look fine, just dead. The kicker is that (luckily) I did 6 PF jars at the same time using fresh ground BRF and they all went as expected - all fully colonized in 14 days. Spores used were ATL#7 and tampanensis. The Atl#7 is already showing nice stone formation MS inoculation. The PF jars were intended for selecting stone and fruit material for clones and the grain jars were intended for harvest. At this point the whole grain jars look like a failure. Luckily I'm fairly confident I can get some good isolation material from the cake jars. Spores are $pendy now.

Anyone ever seen old grain which appears okay to totally fail like this? It just about has to be the rye because everything was identical with the BRF jars except the grain used.

What is your favorite grain for stone harvest now ? I'm going to buy fresh grain and chuck the last 10 lbs of the old rye. I hopefully will have a clean LC isolate in 10 days or 2 weeks, I'm going to needle biopsy the invitro stones tomorrow.. I like the looks of ATL#7 stones better than tampanensis and I think I'll move just that forward for a harvest attempt to begin with.

I wouldn't have expected much from 15 year old rye, I'm surprised it didnt disintegrate when you touched it.

I've never grown stones before, they're on a mile long to do list though.

The old rye looks okay, maybe a bit dryer and dustier than fresh. Learned a lesson, the spores that failed cost more than getting fresh grain does.

I have a couple quick pics of the stones in the BRF cakes 17 days after innoculation. I'm pretty happy with that at least. 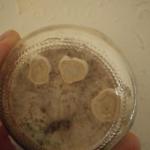 I've no experience with grain that is that old but I suspect it is not the grain causing the problem. If it were properly stored, there should be adequate nutrition to support mycelial growth... I would suspect the inoculate as the issue first, then moisture content, and only after that would I be looking at the grain... Though someone may have a more experienced take where old grain is concerned.

I wasn't concerned about using the old rye either. It has been stored in the pantry alongside some long term storage food buckets, so pretty good storage conditions. It looks okay and I know it worked fine 15 years ago. The 6 BRF cakes I made on a whim were made in the same proportions, sterilized in the same run and inoculated at the same time using the same syringes. The BRF kicked off well and the rye was a dud. Dunno, maybe a mystery forever.I am really rusty at growing, but I used to think fresh home ground rye flour was better than brown rice flour.

I took some tissue samples from the young stones in the BRF jars with a long needle and syringe - a needle biopsy thru the inoculation holes in the jar lids. Made up 3 jars of LC. I hope to be able to test the LC for cleanliness in 6-7 days. I bought a fresh bag of rye berries and some popcorn and will make up 5 quarts of each if/when I have proven the LC is clean for mass usage.

did you do your biopsy in front of a flow hood or a little still air box? That needle moving through normal air and in and out of your jars is just asking for contaminants. Don't mess with anything that isn't fully colonized- if there is room for something else to fight your myc is sure as shit will and probably win.

I'd probably spend the 20 on another syringe and not use that culture you're making. you can make a new culture with an LC that has a much higher likelyhood of being clean than what you did there, and you may have introduced contams into the one you poked. Now if thats dirty (which you probably won't see until all of the next project contaminates) you gotta throw the whole damned thing out, and you'll have wasted even more.

Back to the grain, even though it wasn't the problem- how are you testing moisture levels? especially sitting around so long its dry AF and may take a little more time to cook if you're cooking. I would cook old grains vs. using a no soak tek or whatever it's called since there will be a little different texture on the old rye causing it to suck up more water, or needing a little longer to hydrate, but thats just my guess. I'd rather spend a couple more dollars and take a little more time and GREATLY reduce contams and failure. Think about the steps you take every time you're doing something - I'm slow and methodical and do everything the same way.

The "biopsy" is a done deal, no going back now. I pulled out 2 plugs with a syringe & needle from small stones in the BRF jar in the picture above. I may have screwed it up, but it's one jar out of 6. I did get 6 clean BRF jars that are more or less 100% colonized. I don't have a flow hood, just a SAB. My technique is so-so. I did 25 inoculations without a contam loss so far. Of course, messing with a live culture is potentially more risky. Fingers crossed.

I chucked the old rye this morning and bought a sack of fresh rye and also 5 lbs of popcorn. I'll test the LC's made from the "biopsy" tissue prior to wide use. I've got a couple blank BRF jars for testers waiting. If they fail, I'll either buy a fresh syringe or wait and see if I can get some clean isolate later from the other jars, maybe if I can get them to fruit.

The failure of the old rye - if that's what did it - is a bump in the road. I'm sure I'll screw up a few things before this run is done and I could have used more more jars for attrition. Although I'd like to come out of this initial run with something to show for it, if all I get is a good isolate to carry forward into some stone producing jars, that's enough I guess.Positive side is that I am amazed how fast ATL#7 makes stones - if I don't screw it up.

How long to expect a usable LC if I luck out on what I've done ? 6-7 days? I've got a good incubator set at steady 74F and a magnetic stir plate to give the jars an occasional spin. How often ?

Fresher grain is probably easier than worrying about.

PF cakes, I done a bunch with varying degrees of rye flour, straight BRF always outperformed the rye flour. I never tried a second generation though. The "future food" concept. But it was pretty aggressive genetics I was using.

You can usually  get  Oats , Wheat , or Miilo at a farm store or feed store .

No pictures tonight, but my LC made from a needle biopsy of a ATL#7 stone in a jar is testing clean. The donor jar is also looking good as well, still in the glass. I ran a drop of the LC on 3 agar plates and all 3 are growing clean. I made up 6 quart jars of new rye berries (threw the old stuff out) and the PC is cooling down now. I'll inoculate tomorrow. The LC and the plates look like good strong growth. My only concern is that I'm down to the one untested isolate from the needle biopsy. Hopefully I can get fruits to print from the MSS BRF jars.

How long is good to wait before trying to initiate fruiting on a BRF jar ? The cakes in the jars are slowly shrinking as the nutrients are packed away in the stones. They are 100% colonized for a couple weeks now. I was thinking of leaving them to consolidate for a few more weeks before trying to fruit them. Will that have a chance of working ?