My 'Oh no, I've ruined everything!' thread - jrh

That's so odd that your PE looks so normal, did you go from agar to grain?

I just did my first casing on my PE tub of manure/hay it's looking decent, do you wait for the myc to eat through the first case before you add another layer?

I went from swab to agar to LC and have been using the LC for everything.

I'm not sure how Faht does it, but I wait till I have good growth on top before casing. So, since I apply the top layer of CVG to my bulk, it's about 10 days before I do my 1st case, then about 5 days before my 2nd case.

Yeah I wait til the first casing is fully colonized.. but it doesn’t matter too much. Tedsdead (the gentleman that taught me how to do the casing strategy) puts his second layer on after the first is 20-30% colonized but the end result is the same. As long as the casing ends up being ~1”, that’s what you want.

I'm usually picking oysters within a day or two of looking like that.....

By the way "everything is meaningless" is, IMHO, our petty attempt at self consolation for grasping our individual mortality (so we believe or have been taught).......In my view of things it is WE that create "meaning" by trying to define it......

So tomorrow I harvest the oysters. :)

I think personally I feel more like you... we assign value to ourselves and our lives, but I'm pretty OK with myself at the moment. It took a lot of distance and perspective to forgive myself for no longer being the person I used to be, to give myself the empathy I would give to almost everyone else. My husband is harder on himself -- he expected greatness and he doesn't feel like he's achieved it. He has a long memory and I don't know if he forgives. Plus, he's a worrier so he's tortured by both the past and the future and he's ends up stuck anywhen but the present, which is the only opportunity for creating meaning.

I think he could benefit from one of those places where they give you increasingly stronger doses of psychedelics. I grow mush more for him than for me. I'd like to be able to give him a "heroic" dose.

I’ll second that.. Yeah it’s weird.. yours was the first I’d seen pop up normal looking PE fruits and right around that time, I had a normal fruit come up in a second flush right next to PE pheno fruits... I printed it to see what that ms grow does but not sure when I’ll get to growing it out. Mush does weird shit

I may just be super lucky and have a PE that grows like a normal cube and has the strength of PE. :)

Yeah.. that’d be awesome.. you’ll have to report when you do another dosing:)

Me and your husband have similar issues LOL...meditation, yoga, skateboarding are the only things that keep me present. Usually I’m stuck worrying about the past or future. Which means you’re not truly present.

When did he start having the issues? They claim all of mine stems from untreated adhd which leads to depression/anxiety as an adult.

I’ve fought people 3x my size and 200 lbs over my weight from a heroic dose. He will still hold on and fight to let go, or at least that’s what I assume. 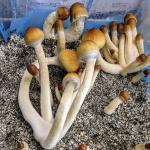 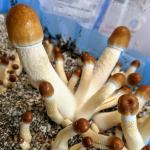 So here's my 16 qt PE tub. It looks like there might be some showing more of a PE phenotype with thick stems and a cap that looks like a beanie pulled way down over someone's head, but most look reverted. I just cracked the lid some to give these guys some more air.

Looks pretty similar to what I got off a second flush not too long ago.. https://mycotopia.ne...1615216717.jpeg guess you’re gonna have to test em out! I’d clone the PE pheno guys or at least swab em. Looks good

You're right, it does look similar.

I bet all of them have the PE strength whether they have the look or not. I harvested a fruit with a normal looking cap and a thick stem and subjectively it seemed much heavier than the B+ I was also harvesting.

My 2nd PE tub (same culture) completely dried out. I'd run out of shelf space and I guess where I sat it had way too much airflow (I use an evaporative humidifier to keep the room around 50 rh). I misted it heavily and cased it and misted the casing heavily. I'm seeing some growth through the casing but the tub itself is just way too light. I plan to keep misting fairly heavily until I at least have some condensation in the tub in the morning or I get pins, whichever comes first.

Oh, and the hubby did a timelapse of the pink oysters (which also brought in fungus gnats, grrrr). There are a few bad frames but he's too busy to look for them and it's all on his computer so I doubt I'll have an opportunity.

That time-lapse is so cool!

This is the second time I've had my agar fruit on me. This is already a clone so I don't need to isolate it, but I put its brother (at the pinning stage) into the fridge. I'll come back around to ApeR eventually, but probably not for a few months at the earliest.

That time-lapse is so cool! 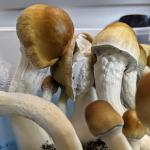 Looks like I got some PE phenotypes as well. I should prepare some LC to clone one or more of these. The one that's turned completely sideways was one of the first and is also one of the biggest. 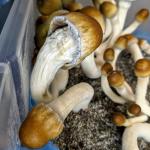 This guy has his veil broken and is showing some bumpiness below the cap. Is he ready for the knife? Or spare him for another day? Do PE take longer to mature than other cubes? Normally, I think my cubes are about 4-7 days from pins to harvest. I guess these are only at 6 days, though it feels longer. But still, I harvested the reverted phenotypes a few days ago. 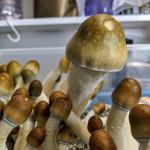 Some of my caps have little pits on them like this. Does anyone know what causes this? Just random deformities in the PE phenotype? (My reverted cubes didn't have these, and neither did my B+ or GT. My ApeRs had it some, but of course those are PE relatives.) Too much humidity or lack of FAE? Other things we can't control for?

Thanks for the help!

Nice! You can let them go until they open up and take some swabs. They’ll get soft and that’s usually how I know to take them. The pits could be from bacteria blotch or just a deformity.

Thanks! Is bacteria blotch something to worry about in terms of the fruit itself? Or 150 F in the dehydrator makes it safe?

I dehydrate and then boil the hell out of it if I'm concerned.

Just did my 2nd 1/2 inch casing so we will see how the different casing thickness plays out.

I'm not getting a full canopy or anything, but I didn't get any blobs either which is what everyone worries about with the PE first flush.

I'm going to try to clone these bad boys and that should help me with more even fruiting in future grows.

Yeah I find that cloning works much better for getting a full tub.. especially if you have a lot of sub strains in your ms grows. Can be pretty spotty in those situations. Yours look nice and healthy though.. I wouldn’t worry too much about the pits.. could just be a cap deformity.. usually blotch is all nasty looking and happens when water drops down from the lid and sits there breeding bacteria.

I’d do like you said and clone the PE pheno from a cluster and I bet that tub will be bangin.. get nice clustering like this https://mycotopia.ne...1612154768.jpeg

Well, I managed to kill my PE tub. The first mush was a side pin and it fully opened up like they're s'posed to. I even took a couple of swabs from it, though I don't know if they're dark because of spores or because I ravaged the gills. After that, the rest of the mushrooms stalled for a day or two, and today they're definitely done for.

I know I never had the FAE dialed in, so I think it was a combination of letting things dry out too much alternated with not enough FAE. Anyway, today I harvested and even this mediocre yield is too much for my dehydrator. I left the lid off the tub after I took that pic 4 hrs ago and the mushies were getting soft by the time I harvested, so I think things were definitely drying out.

I did 3 clones to LC so hopefully one of those is good. I felt bad spraying my biggest remaining mushroom with alcohol while getting the tissue samples but I ended up with more mush than I can handle anyway.

Ahhh, I can smell the drying mush from here. ApeR had that smell too.

Anyway, I have a second 16 qt tub going. It got dried out because of being too close to a fan, so I misted and cased. However, I think drying out then being rehydrated is a pinning trigger, so it started blobbing before I did the second casing last night. I'll see how it ends up.

Wait why is it dead? Those look just right for picking.. that’s how PE looks when it’s ready haha. That looks great actually.. those PE pheno fruits are probably super dense and the final weight is going to surprise you, I bet.

Sorry to hear about the blobbing on your other one.