50 replies to this topic

You can play with agar transfers out as far as you like AND use clean "plates" for grain and other spawn type expansions, milking plates and grain jars works, blending agar and sterile water, various slurry making, even large fermenting vats of liquid inoculents can be created and used on chip beds and things like hugelkultur, which I'm starting to experiment with. I want to plant long term food growing plots on my property.....so when the world finishes going completely to shit I can still eat and have medicines......AND BEER! Beer will always be needed...even if we're in caves.......Hopefully I manage to get my glassware to the cave with me.....my prize right now is a two liter screw top Erlenmeyer flask for my first fairly large, relatively speaking, LI fermentation vat. I will have cultivated morels SOONER OR LATER......

Sterile and aseptic technique is an extremely valuable skill set to develop and maintain.....so too is the acquisition/creation of the tools used to accomplish it....IMHO paramount to LC and LI work.......

There are many ways to skin that cat......once we find a workable solution then consistency is the watchword......

Similar life goals. Think wife is finally onboard to allow me to kill the yard!!!!!!

Time to dive down that rabbit hole.

I’m going native plants, permaculture , apiary as the pollinators love all my flowers. Right now I was planning on hay bales. Mush and veggies.

Put in a huge list of stone fruits and insects from the state. Maybe a few more sages.

Want a herb/medicinal garden. A chicken coop and pond. A manure maker would be sick, Alpaca perhaps.

Serious time and money investment…but loans will be done soonish unless Biden stops trying to please everyone. Oh wait he’s just a conservative light and drone like the rest.

Day 2 one of the "baby EQ" plates contaminated. A huge patch of a brownish-green spores mold (guessing Trich) covered a plate. I could also see a bit of growth on a couple other plates, but not nearly as fast and aggressive as that mold.

As of now, all jars are showing some growth. But the leucistic EQ jars have the most. Though I'm not entirely convinced that it's cubensis myc. It looks a little more cotton-y than what I'm used to, and the hyphae seem to be more tangled than usual.

This could be due to large amounts of spores (some larger chunks got in to most jars), or it might be due to the orchid growth medium. It's difficult to get good pics in these jars, but this one shows the ambitious leucistic EQ jar, with a small section that shows the type of myc growth I'm talking about (so long as compression doesn't mangle it too badly). 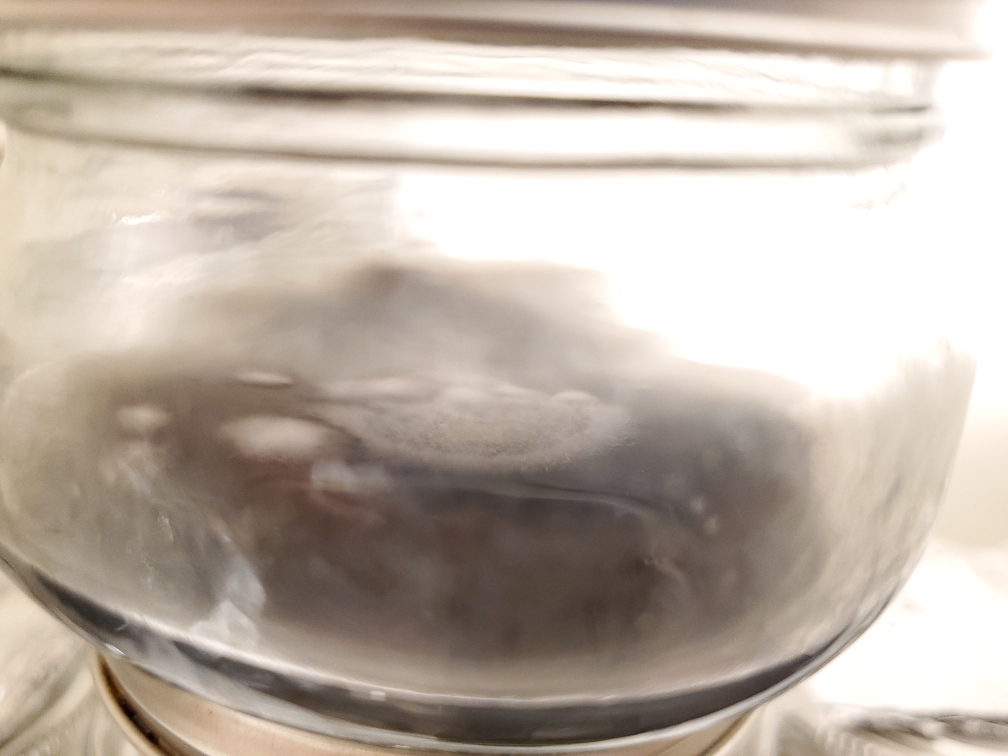 One of the spore plates in this batch got a greenish/brown mold, and another showed no growth. I suspect my inoculation tool had some excess alcohol on it for that one.

Last Monday I made 2 transfers from each successful plate. And interestingly enough, almost each plate is showing some really great rhizomorphic growth. The 4 plates from the "eyeball" mushrooms are very cottony/tomentose, and then one of the two transfers from another spore plate.

When I made this last batch of plates, I had to clean out a bunch of cultures that had been in my fridge since early Spring. I assumed that most of them froze at one point, but I left the most viable looking ones in the cupboard. And what do you know, I got a nice looking transfer from the culture I started from a dried B+ gill! 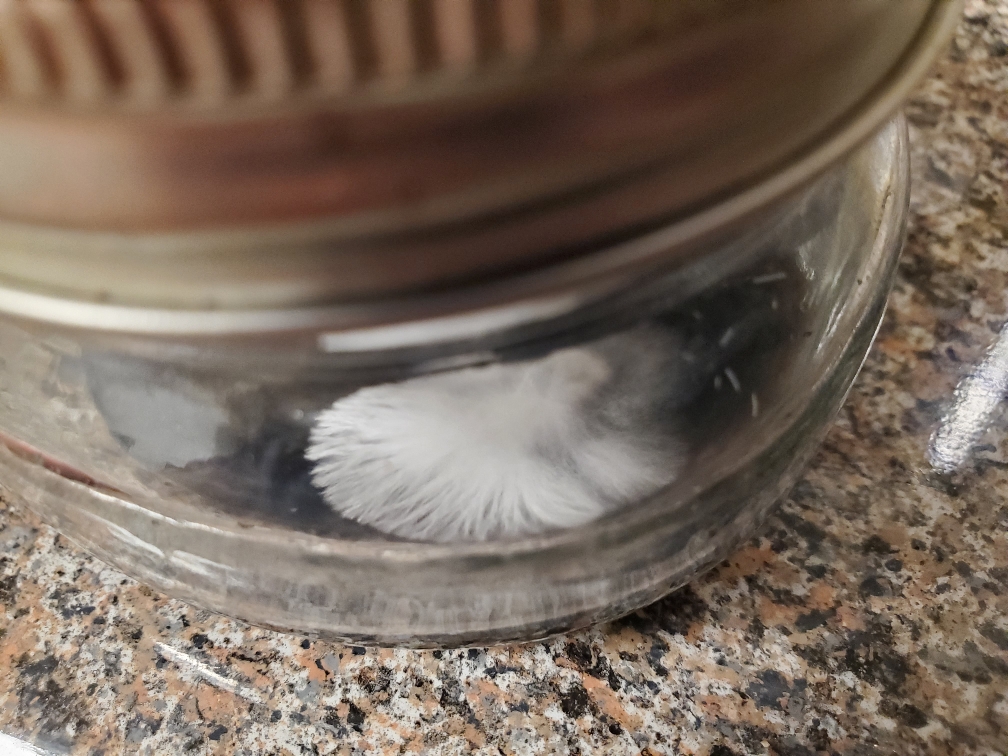 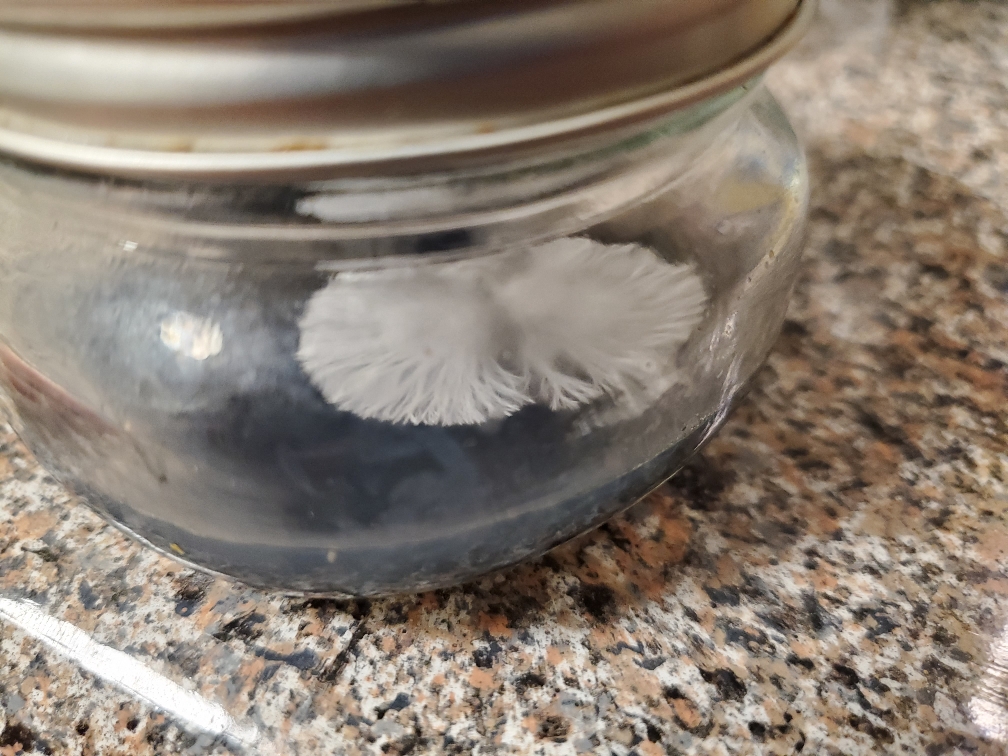 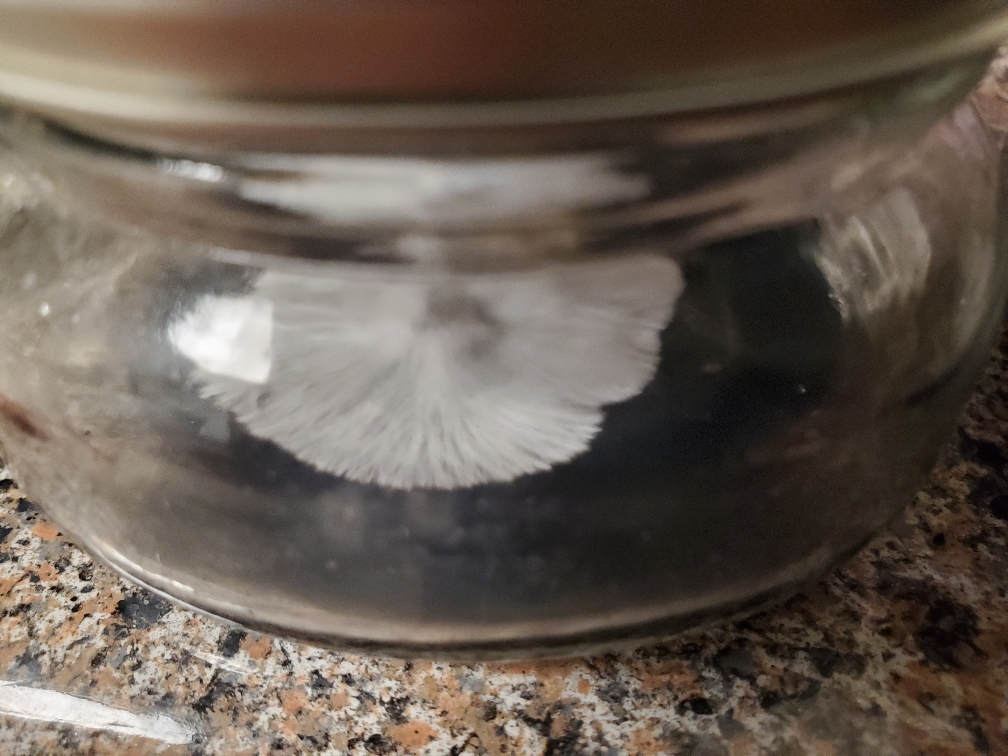 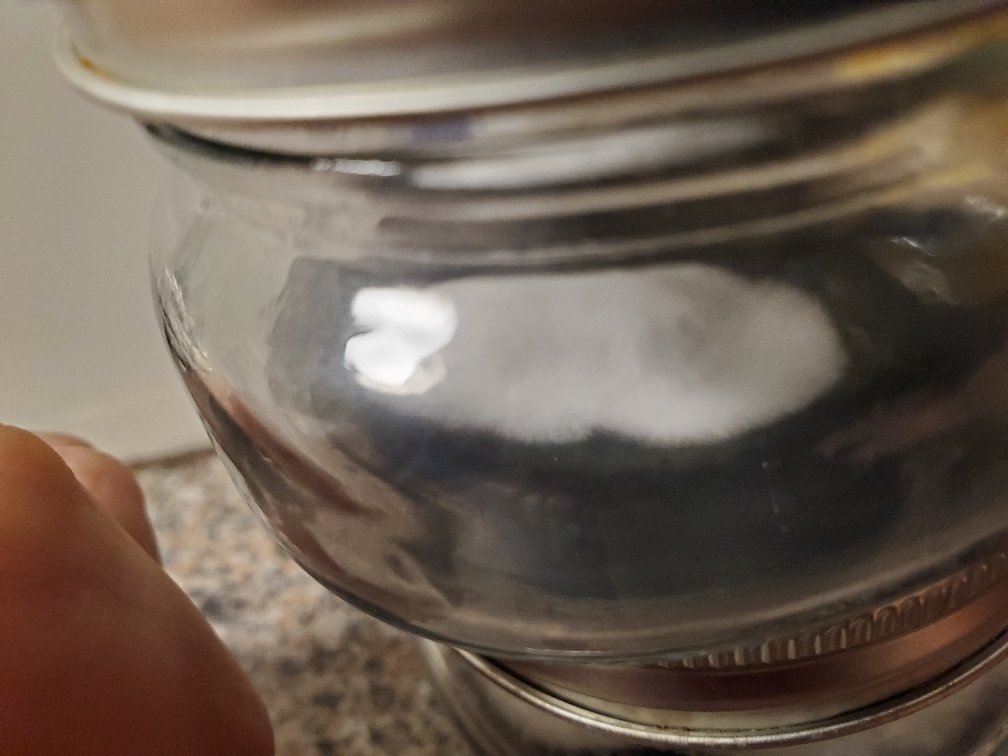 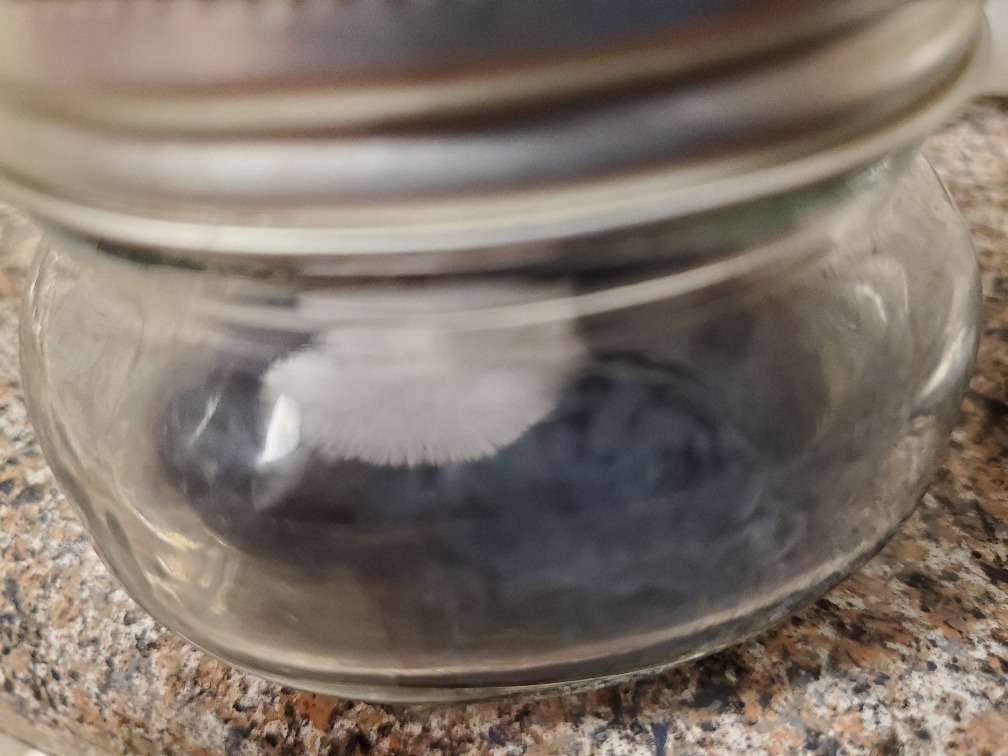 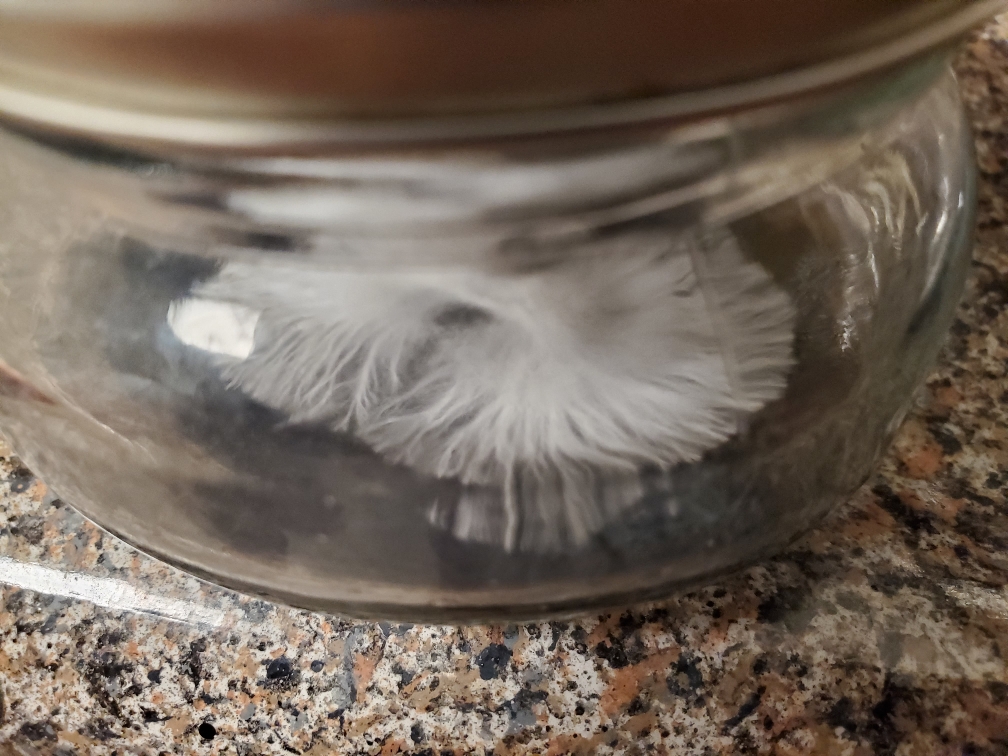 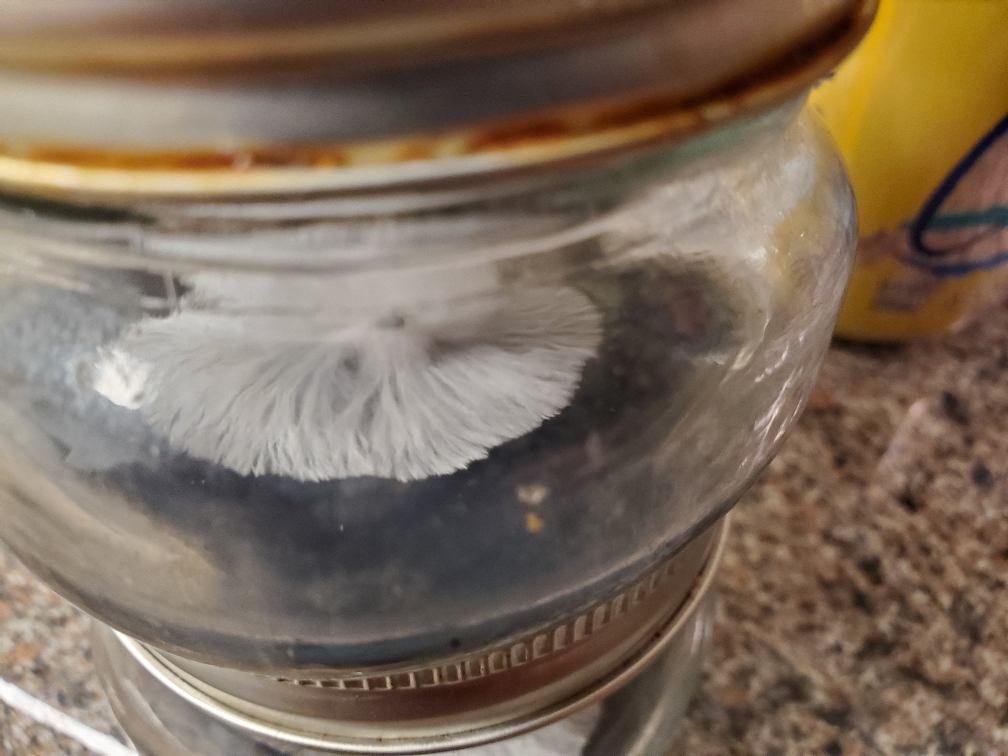 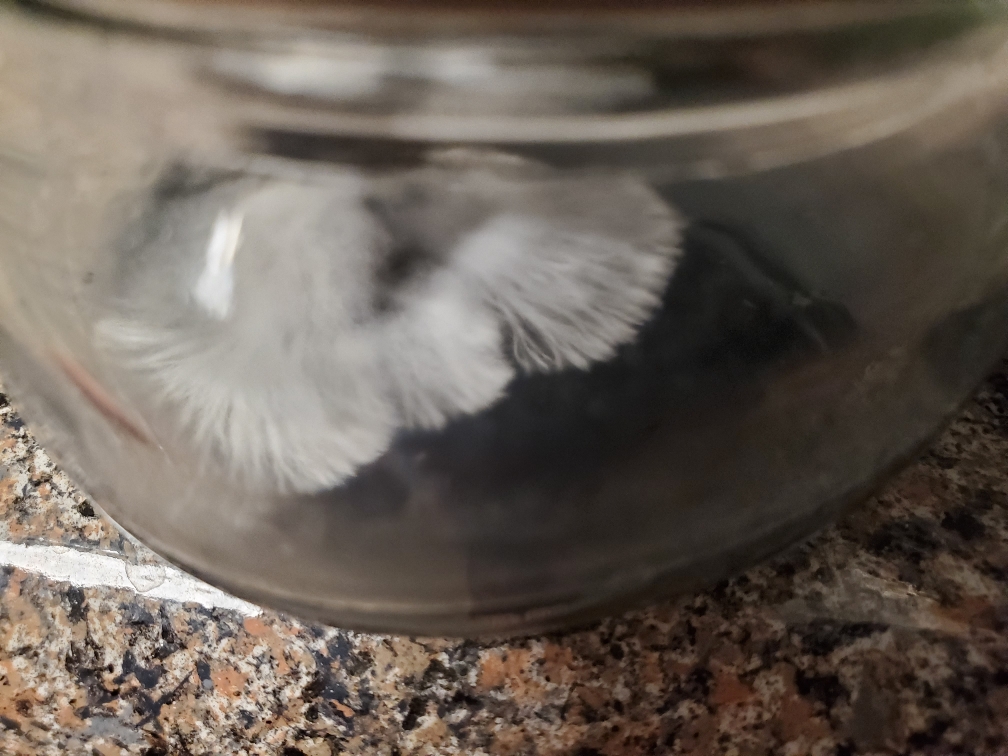 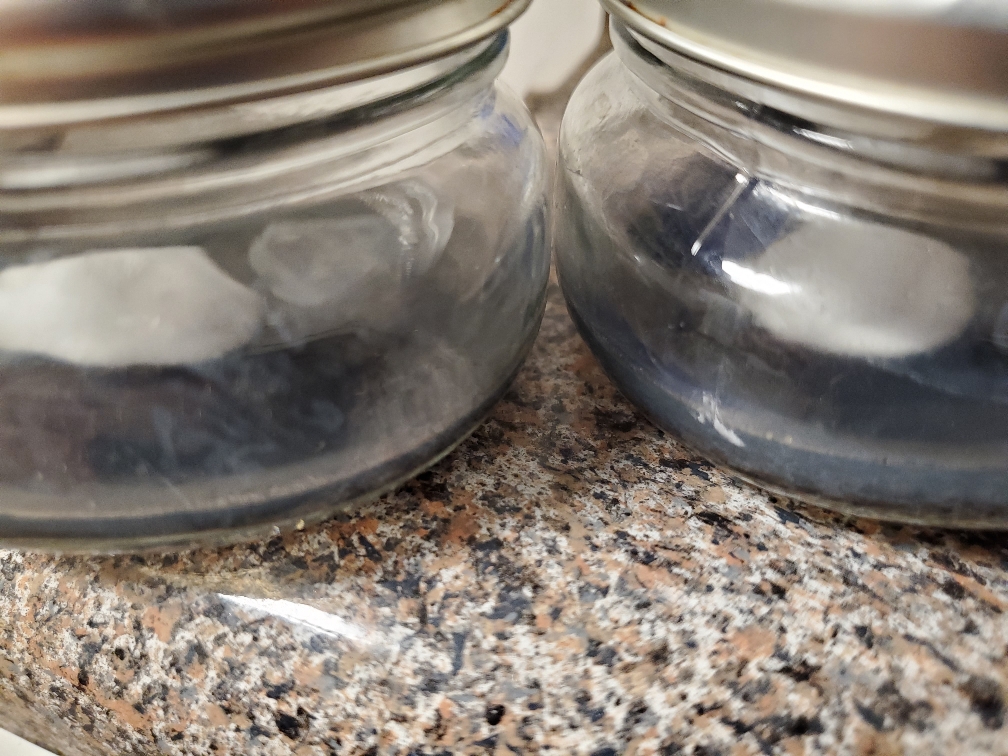 You might as well start planning the grain run now.....those rhizomes are freaking awesome!  Very nice......I used to be Mr. jelly jar no pour agar guy until Needles got me going using pitri plates.....

Now I have several dozens of reusable glass (I'm looking for 60mm stainless steel sterilizing tubes if anyone has leads) "Pyrex" plates.......

Really though, if you haven't already, having a flow-hood or two, even a small one opens up all kinds of new ground to fiddle with....but LOOK at these jars.....the results cannot be argued with.....

I've seen people use thermos to put reusable dishes in. I'm assuming you're dealing with condensation?

Most oven sterilize glass, I don't as I don't want to run a PC and an oven.

I just double wrap in foil in stacks of 2-3. Pour a bit hotter and cross my fingers. Had ok results with no pours too. Always got a flow to dry it a bit...

You can try wrapping in foil and putting into a tupperware with lid slightly vented. (lazy and haven't done it in a moment).

Last batch I tried wiping with a lysol cloth as it's supposedly a good disinfectant. Grey and black mold LOL

A flow-hood would be amazing, but I don't have the space or money at the moment.

Luckily I haven't run into much condensation after inoculation. Definitely had some going on when the jars/plates were fresh. But I didn't clean the jars well before doing this run, so there is some particulate (probably bits of agar and hard water stains) on the glass.

As I was looking through the jars last night, I figured it would be time to start my grain tonight. Honestly, I don't know if I have enough quart containers... I may need to run to the grocery store, or turn my fridge down a bit.

Edit: OH, and I didn't mention used the rest of one "eyeball" spore plate to noc-up 4 qts of grain last week as well. And those look to be doing well. Probably spawning them next week. Can't wait to see how a full grow of these ones comes out.

So, I messed up a bit. I prepped some grain and agar before work yesterday, I ran the agar, then was going to run the grain. I got the grain loaded, and started boiling the water (no weight on the PC yet) and immediately passed out. Woke up this morning w/ the PC still on the stove, luckily it hadn't boiled dry, but the grain looks pretty wet.

Okay, I decided to add some dry WBS to the wet stuff and try again. This gives me an extra quart, plus a small 10oz WBS container. It's a shame I let this happen, looks like the moisture content was going to be spot-on had I just done it right the first time. 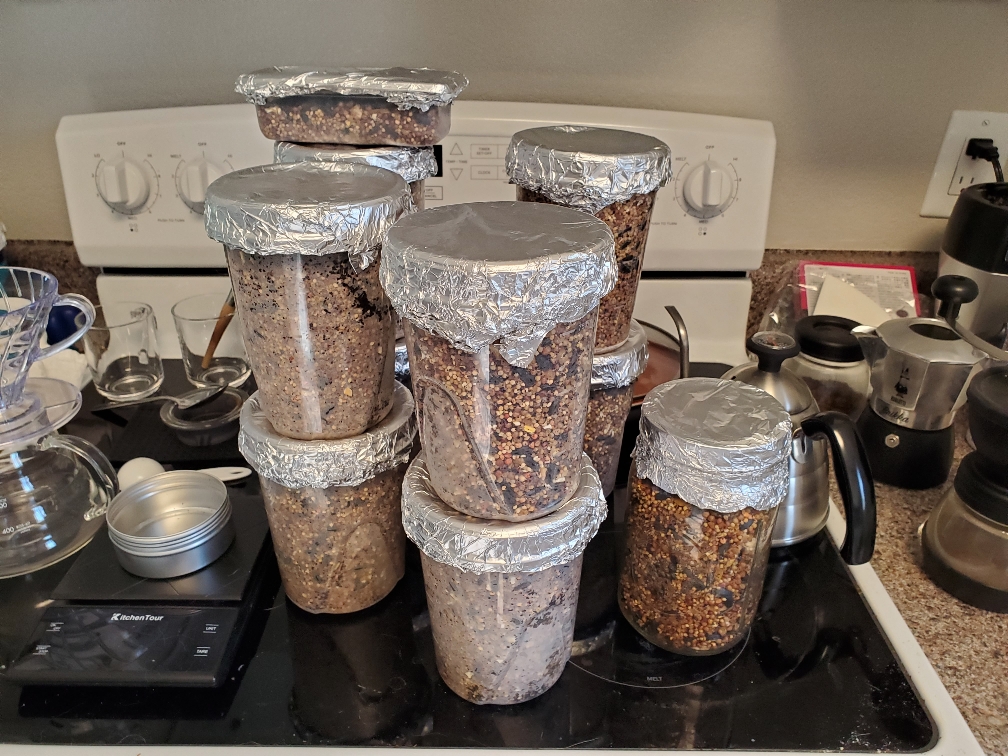 It seems that I was successful in fixing my WBS. It's still a little bit wet, but the dry grain seems to be slowly absorbing the little bit of excess moisture after reprocessing.

I'm excited to watch how they all develop over the next few weeks. I'm gonna need all my dub tubs when it comes time to spawn!

Another one of my fridge cultures from last year "came back" and started pinning after it warmed up. It was a tissue sample taken from a bumpy stipe fruit, so I took the pin and put it to a fresh plate. Don't remember the strain, probably EQ or Redboy/Redspore. 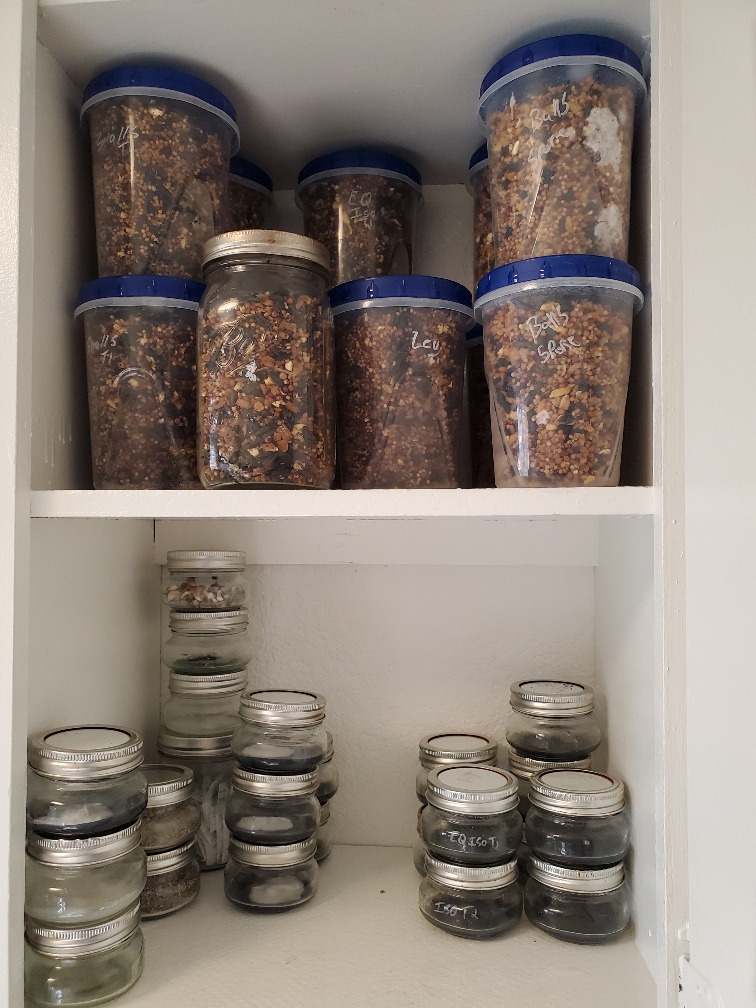 Those agar jars are looking great. Can't wait to see the results when they grow out.

Good save on the WBS. Ive a a similar occurencr, dumped it all and mixed in vermiculite and reprocessed. Worked out fine.