70 replies to this topic

Well, my last two tubs are done. They fruited well, but I definitely could have gotten more from them. The problem was that I kept accidentally leaving the lid-tubs off for too long and drying out the pin sets. I was also getting a lot of condensation and dripping during colonization, which seemed to cause some overlay issues.

So this time around, I've mixed things up a bit. First, I added ½" polyfilled holes high up on the short ends of the lids and may end up adding some smaller holes lower on the long sides if needed. Then, I cut back the amount of water in my coir again. This time, I used 4qt of water to 1lb of dry coir. And finally, put the tubs right into fruiting instead of covering for colonization.

I also did some mild experimentation with the sub. It's mostly coir, but I also added some used bark chips and pumice pieces from repotting some orchids, as well as using about 8oz of a 2mo old batch of organic fertilizer I use in my little raised bed. It's all worm/bat/kelp based, and I boiled it with the water before hydrating/pasteurizing my coir.

So far, these tubs are looking great. They are about 5 days in and starting to knot up a bit. The far left is from what I've been calling my EQ isolate lineage (probably not a true isolate yet), the middle is the B+ that I started from some dried gills, and the far right is a clone from a mushroom with an interesting bell shaped cap.

The pic of all 3 was taken about 16hrs ago. And the individual pics should be in order from left to right. 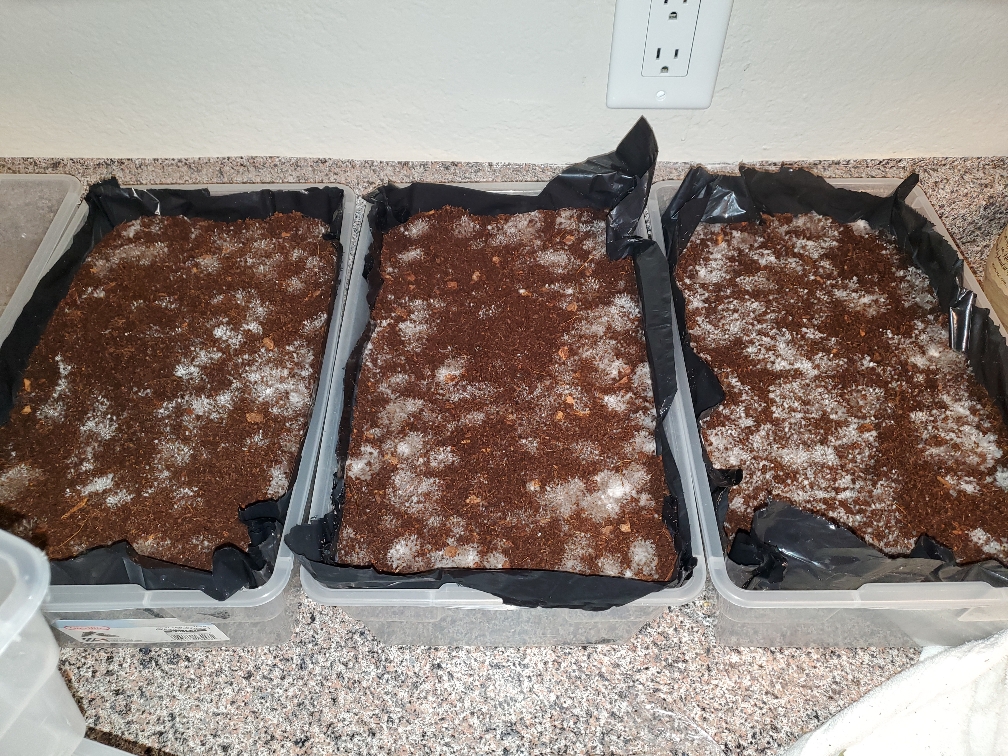 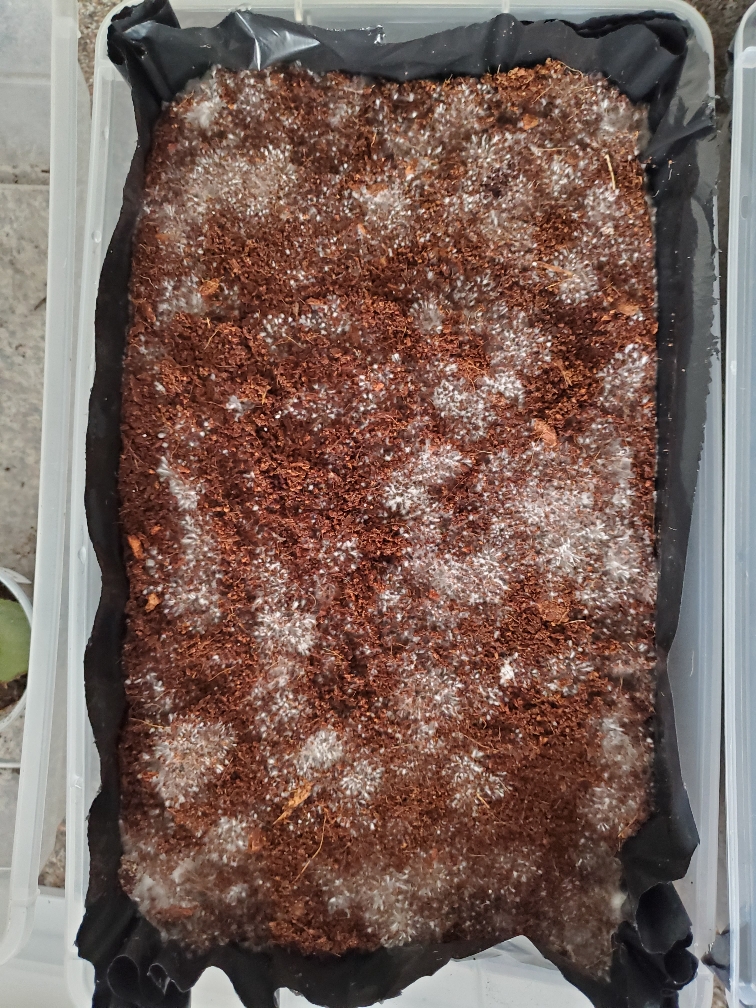 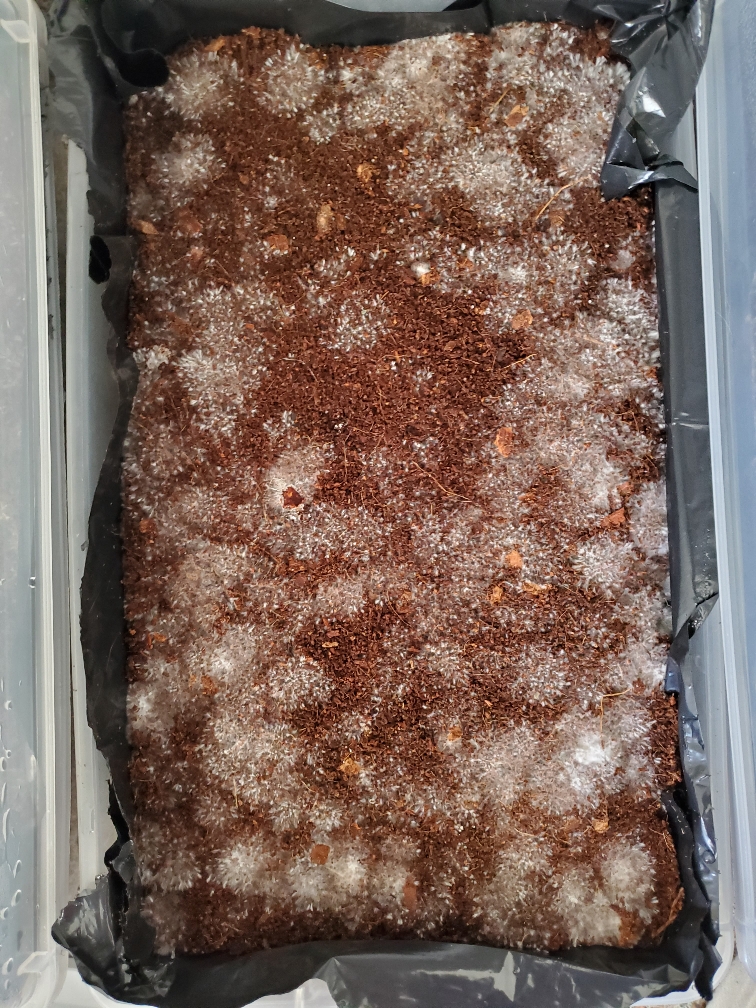 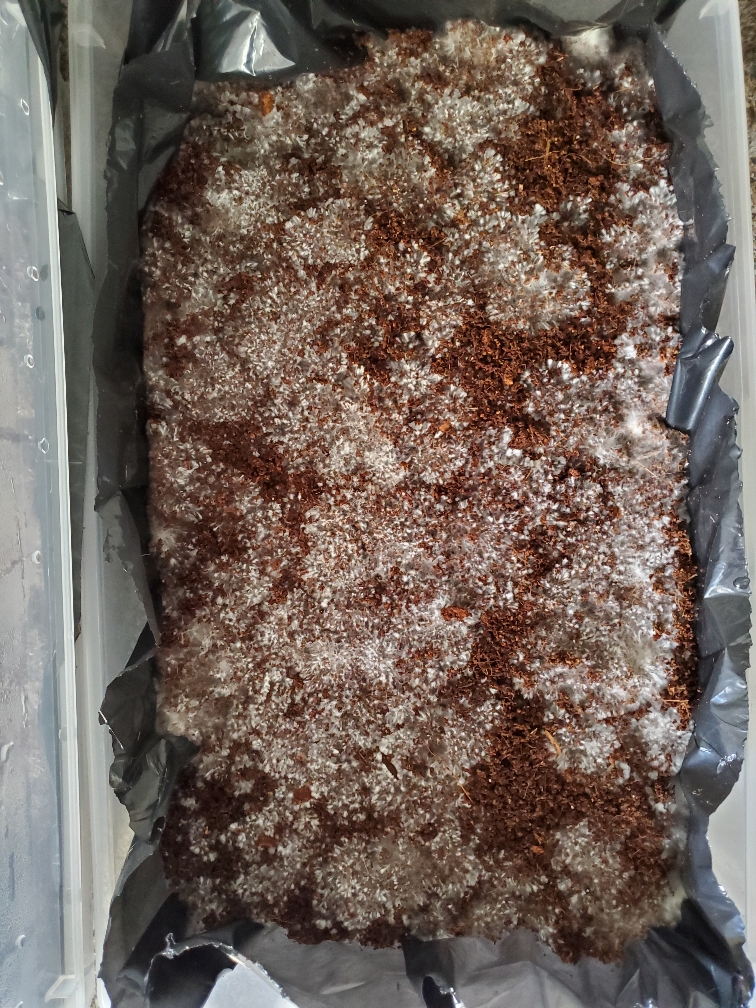 Oh yeah they do look good.......sweet! I love it when rhizomes blast out and reach into the air....but even more so as they fall back and knot...

I started harvesting the first flush off of the "bell capped" tub (far right in last post). Though I'm not so sure that this was the culture I thought it was... There was a chance that some things got mis-labeled, so I'll have to go back and figure out what this tub could be. I'll definitely take a clone to properly label; this is a pretty funky looking phenotype.

I'll start labeling better once I get some new prints.

Pic is after harvesting a large handful of similarly looking, more mature fruits. 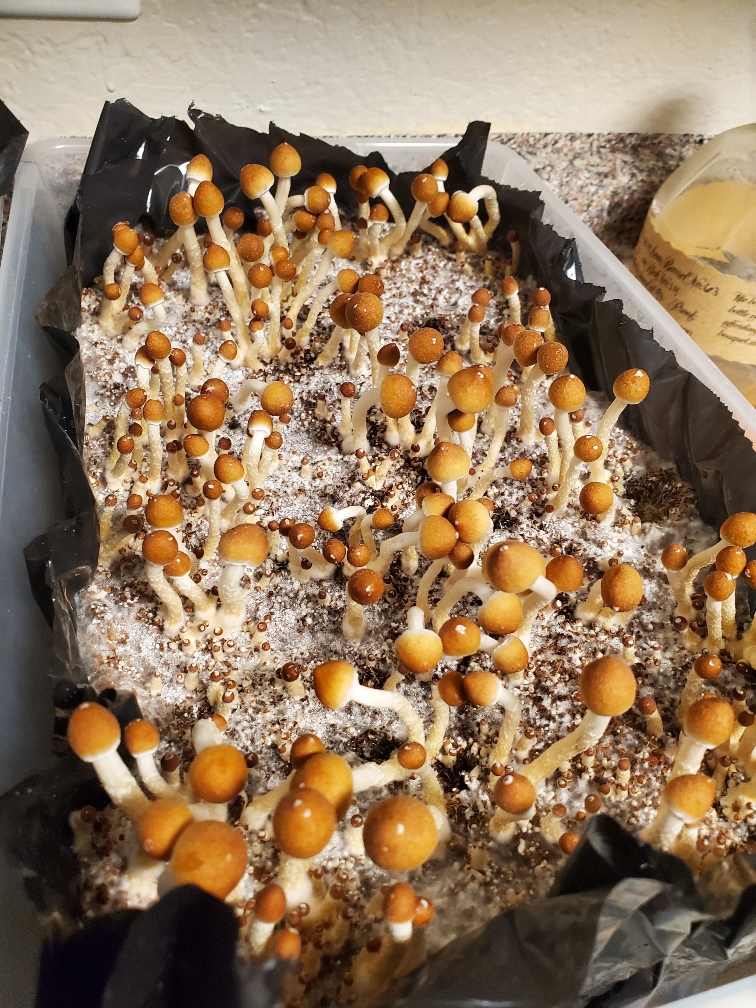 The other two tubs are coming along. They both appear to be putting out some rather large fruits, especially compared to the one I posted last night.

The tub in the middle is definitely moving slower and has some scaly looking stems. I did realize that perhaps it was too well insulated by the other two tubs, so I arranged some gaps between them.

Here's a pic of the large handful I took from the funky-fruits this morning. Then pics of the two other tubs. 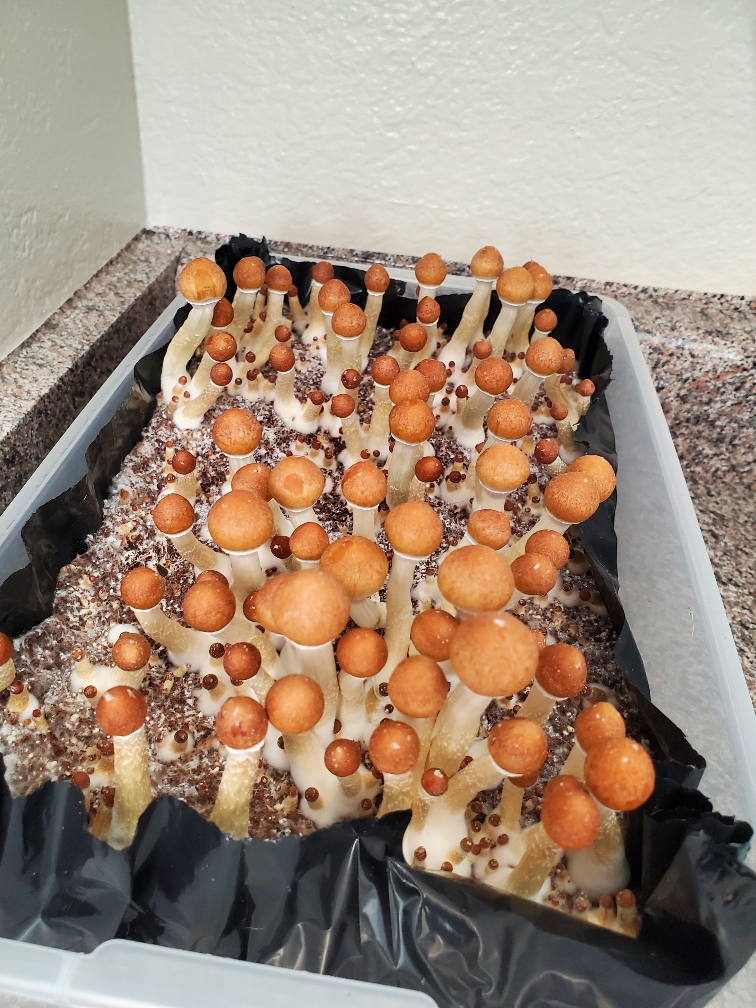 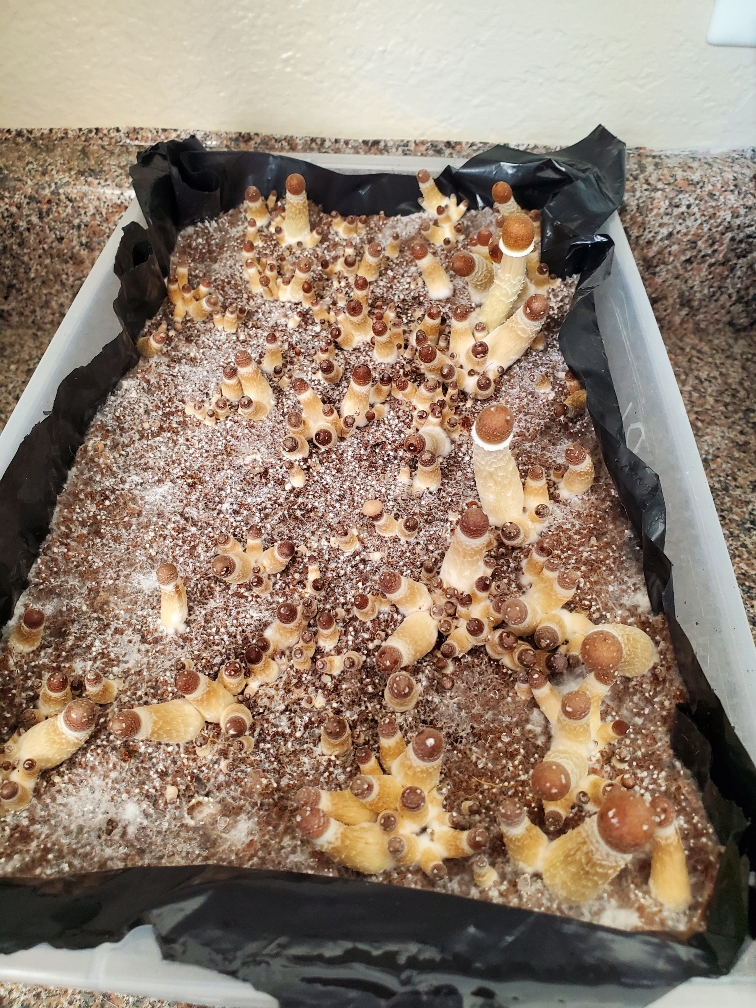 Just spawned my first batch of Lion's Mane! Got some LC online, and shot up some quarts. Definitely a new experience compared to cubes.

I couldn't find bran anywhere convenient, so I just used some coir and oak pellets. I am also using gallon ziploc bags.... So we'll see how this goes. This culture seems to be pretty aggressive, so I suspect that it will tear through the sub.

Not sure how I'm going to fruit. I have a large tub that I use for my glove box, and a couple elevated cooking racks that I've used to incubate tempeh. Was thinking about covering the arm holes w/ cloth or stuffing with polyfill, since I hear that they need lots of FAE. Humidity is a concern, but IIRC, LM prefers less RH than cubes. Am I correct on that?

Any tips for spore printing/collection? I've seen where people prop the mushroom up w/ toothpicks and the like to collect on foil. But would it be better to just swab to a plate with a sterile swab? 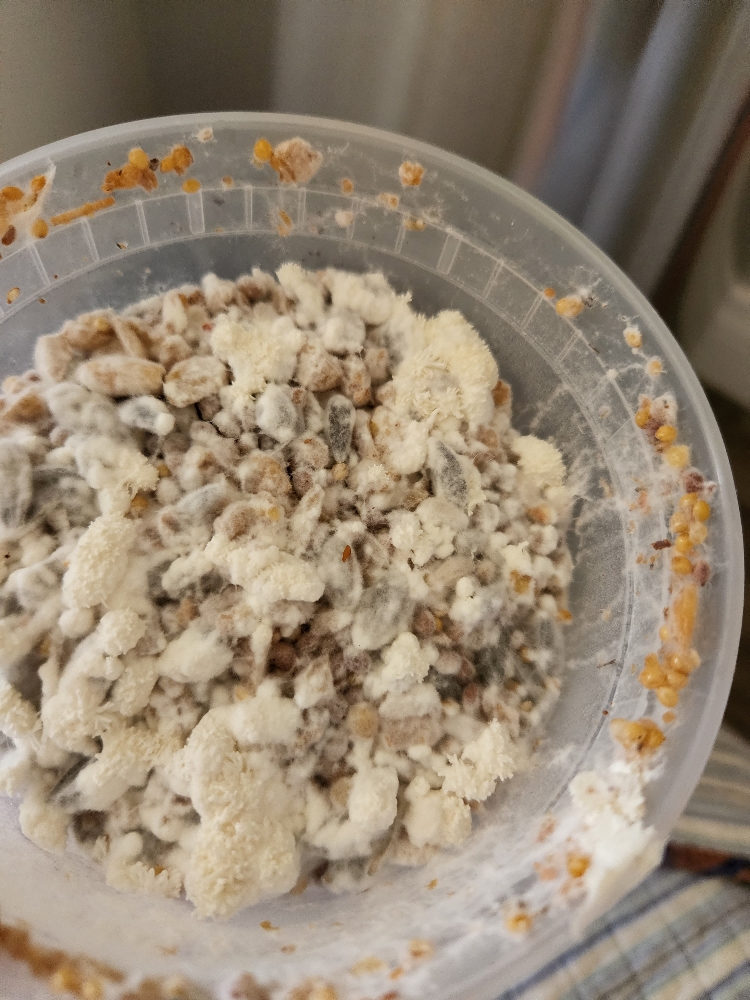 Forgot to update after the LM. They ended up contaminating after I spawned, not sure what happened there.

I had two quarts of cube spawn (labeled Blue Nips

lol) in the cupboard for the last few months. Not entirely sure when I started them, but probably early June or late May. I finally got around to making up some sub: mostly coir, a heaping cup of loosely packed MiracleGrow vegetable soil (coir, manure, some woody buts), gypsum, and a dash of guano/castings fertilizer.

It was only 2-3qt of sub, so I boiled the water and organic fertilizer in an 8qt pot, while preheating the oven to 170F. After boiling for a few min, I added the coir/soil/gypsum mix and stirred as it hydrated. Once it looked well mixed, I put a lid on and put the pot in the oven. After about an hour, I turned off the oven. 8hrs later, I mixed up the cooled sub and spawned.

Usually I put a thin layer on top, but this time it was between ¼-½". Yesterday I started to see some myc poking through, and it looks like it's moving fast! 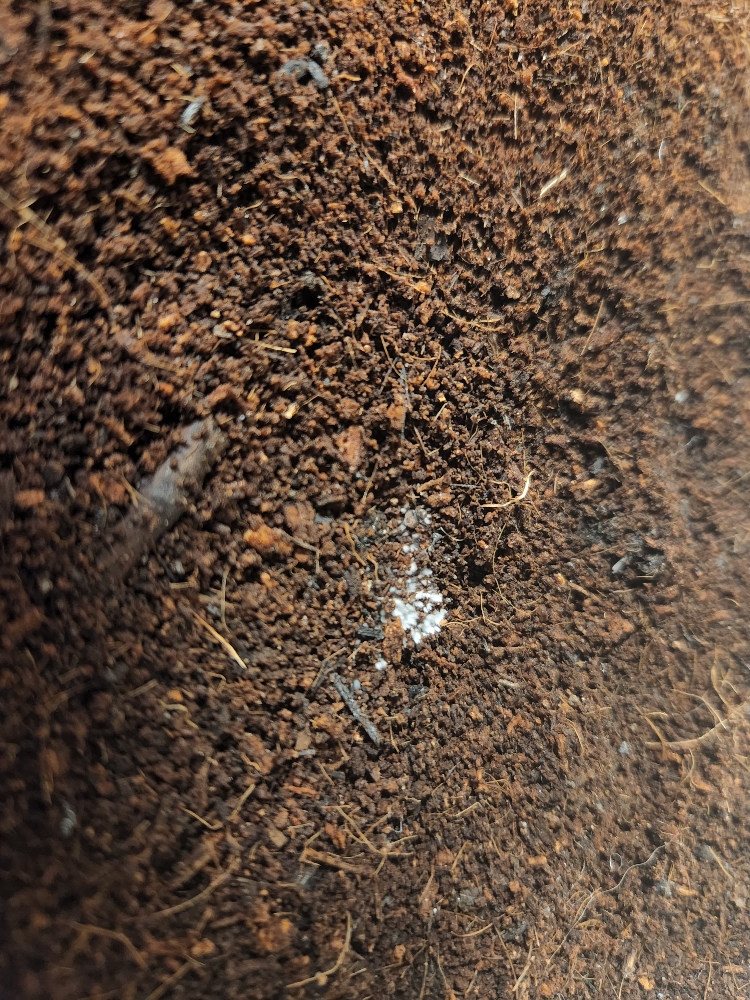 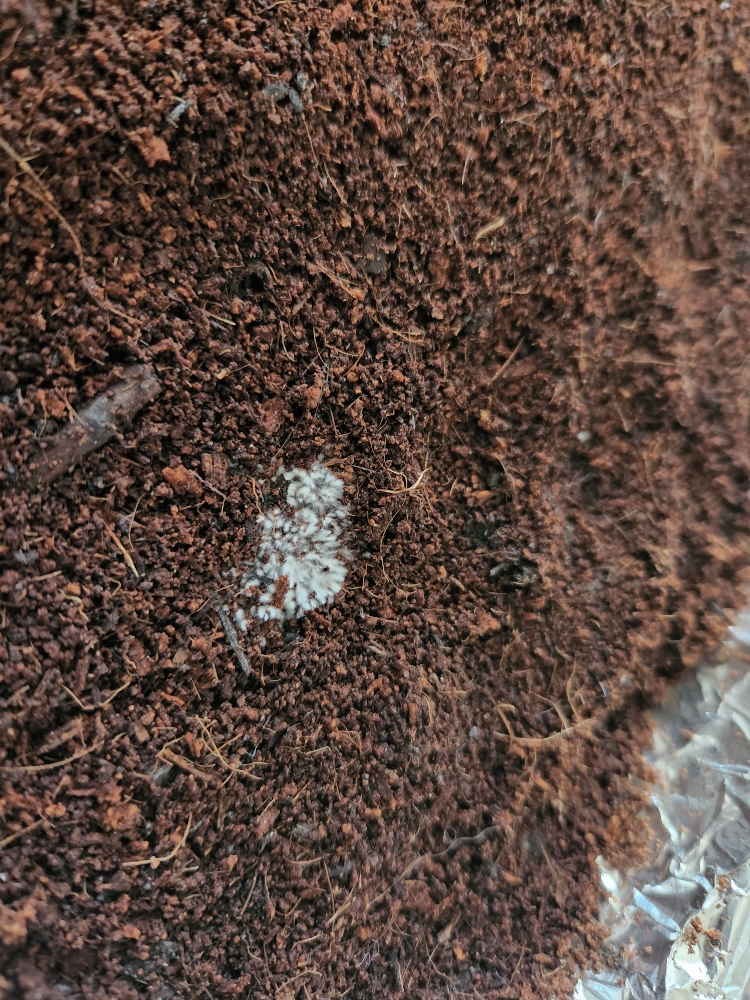 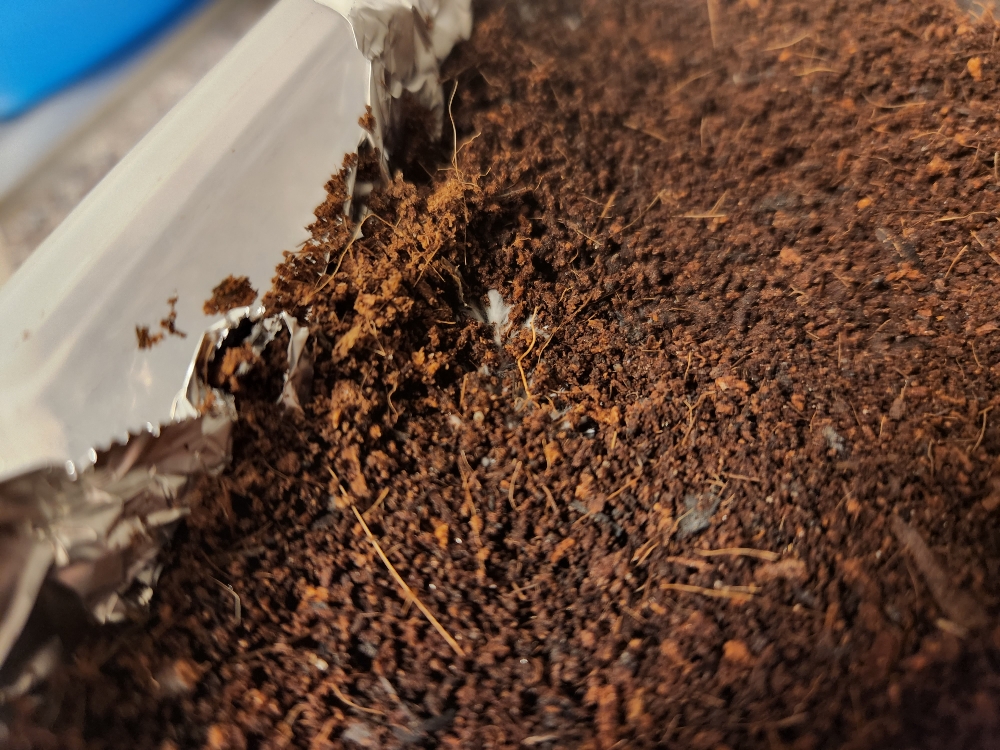 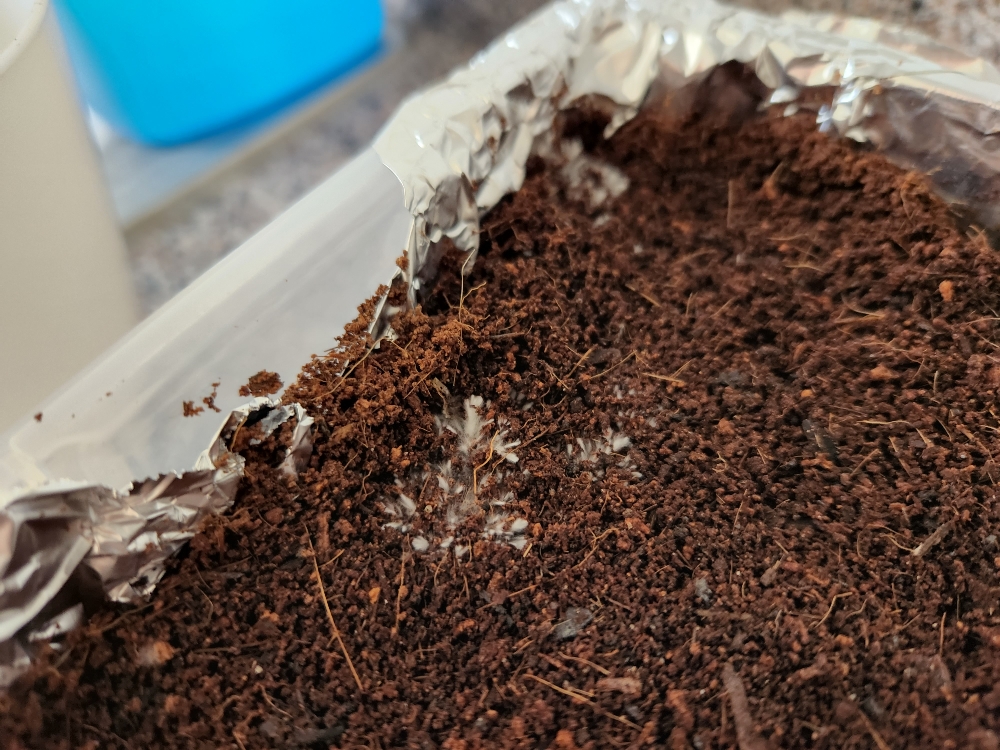 We got some mushroom knots! And it looks like I can see at least one pin, whose cap is still white. 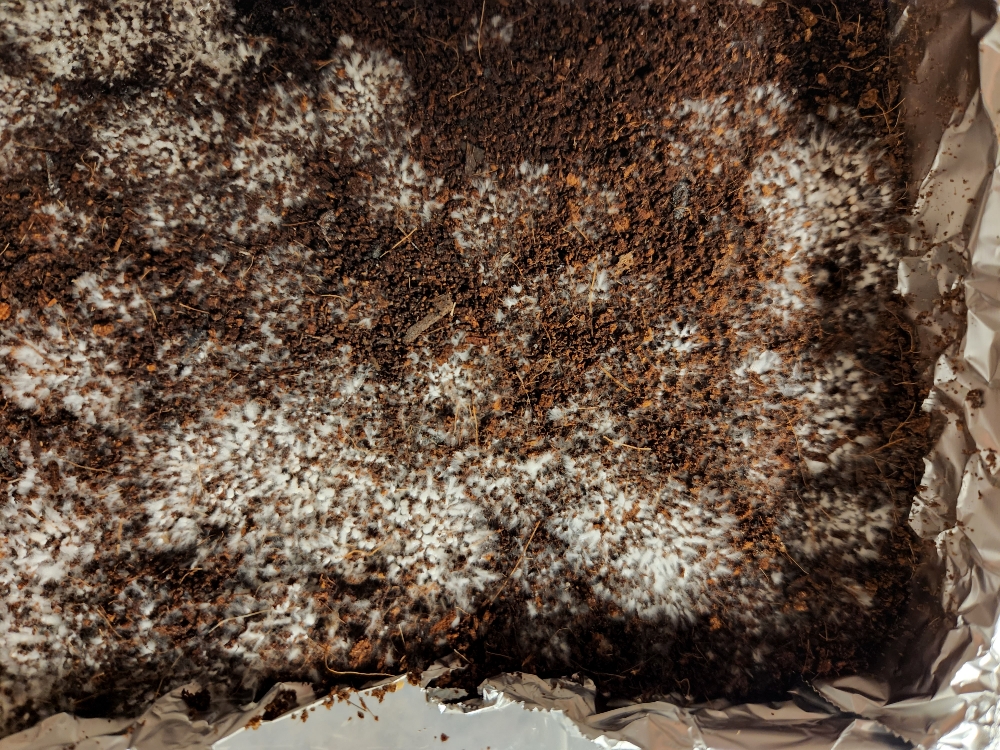 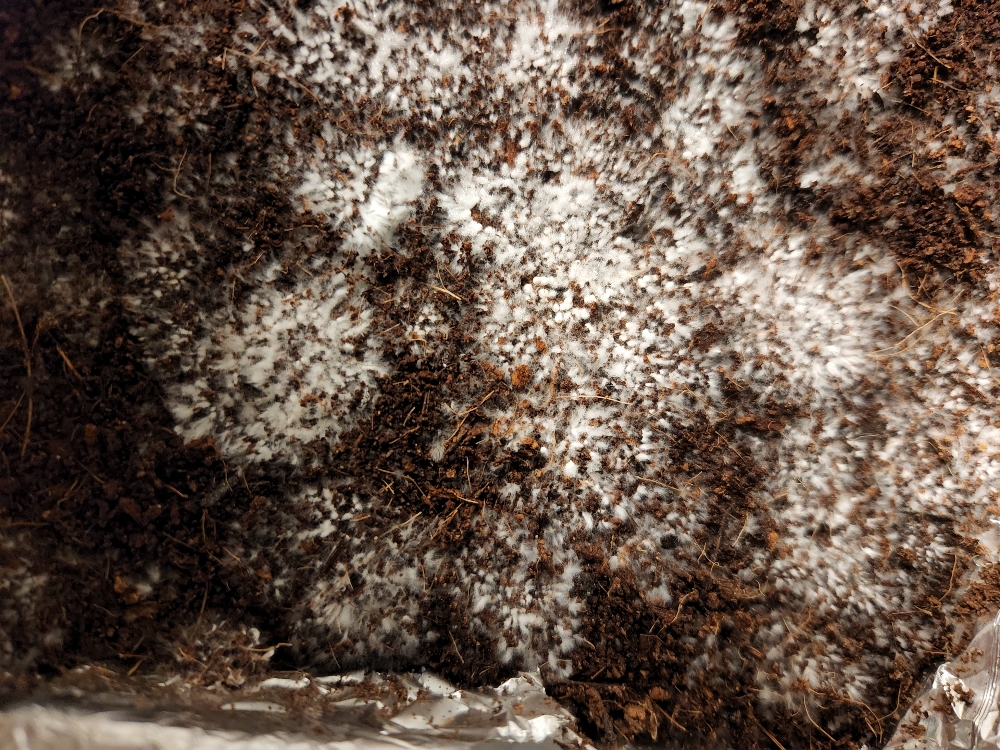 Well, my dehydrator died on me yesterday, after not using it in 3 or 4 months. After I turned it on the other day I noticed that the fan was sounding a little rough, but it was always a bit louder than I expected. Then yesterday the fan kept stopping. I took it apart 2×, and the motor felt nice and smooth, so I lubed up the axel it spins on, which improved the noise.

But after work the whole thing was dead. No lights coming on or anything. Luckily it was mostly done w/ the run, with just a couple slightly soft mostly dry shrooms. So I put them all in a container w/ a ton of desiccant pouches to pull the rest of the water out. New unit arriving tomorrow.

Edit: they don't look too nipple-y. Seemed like 2 or 3 substrains made it into the clone sample I took: some shorties I had seen before, some nipple-ish caps, and some med-sized dome/sauce shaped caps. 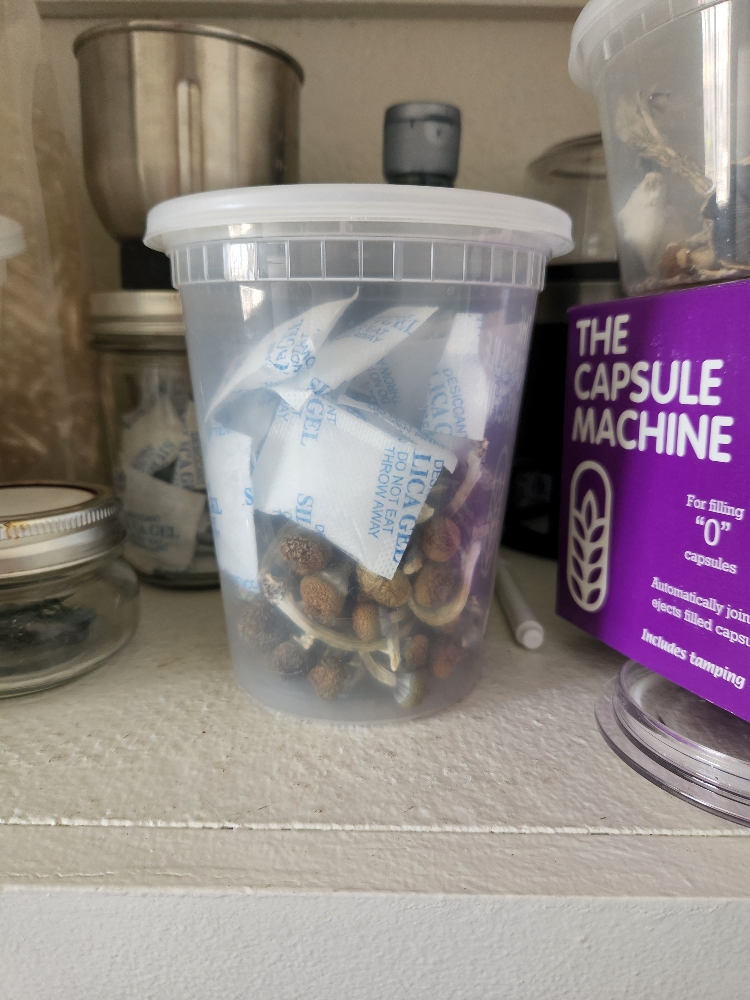 WOW ! bummer about your dehydrator , i have a very generic heated dehydrator i got on e-bay like 20 yrs ago with half dozen extra trays .  for  about $50 .. i also had two of those RONCO Egg shaped dehydrators that came with no heater just fan , i bought them both at thrift stores for $5 or $ 10 apiece but my EX- swiped them about 15 yrs ago .....man I'm old and CHEAP  eeeerrr i meant THRIFTY  ..but the Thrifty Chinese heated dehydrator still works great ..  i  dry  mushrooms over night in dehydrator then finish them in a tightly sealed generic tupa-ware type container with a bunch desiccant .

WOW ! bummer about your dehydrator , i have a very generic heated dehydrator i got on e-bay like 20 yrs ago with half dozen extra trays . for about $50 .. i also had two of those RONCO Egg shaped dehydrators that came with no heater just fan , i bought them both at thrift stores for $5 or $ 10 apiece but my EX- swiped them about 15 yrs ago .....man I'm old and CHEAP eeeerrr i meant THRIFTY ..but the Thrifty Chinese heated dehydrator still works great .. i dry mushrooms over night in dehydrator then finish them in a tightly sealed generic tupa-ware type container with a bunch desiccant .

instead of buying expensive desiccant silica crystals . i go to Pet Isle at Evil Wal-Mart and buy a bag of there SENT FREE Krystal Kitty litter ........... same stuff ..only $4 for 4lb bag . .THRIFTY .

I'm hoping this next dehydrator lasts longer (gotta beat 1.5yrs), and that the other one is just defective. I did buy the same make/model to check, plus I can re-use the trays. I've seen the same brand's more expensive versions used hard in professional settings w/ no issues.

Usually I fully dry mine in the dehydrator. I can get an entire stack done in about 8hrs. I use the dessicant (and O2 absorbers) w/ my vacuum sealer. But I do have a bunch of silica litter and a bunch of color changing silica beads (

There has been some talk about the color changing beads toxicity.  The blue ones are colored with cobalt IIRC.  Though it shouldn't be a problem if they are not coming into direct contact with what you're drying.  Just food for thought.

I know they are expensive, but I've never had any regrets with the Excalibur dehydrator that I purchased several years back.  Though to be fair, I use it more for stuff out of the garden then I do for stuff out of my closet.  It's likely a bit overkill if all you're going ever dry is mushrooms, unless you're going BIG that is :)