I’m sure it exists, but I can’t find it and I thought it might be useful to have something like a table of species with a coefficient of potency. Something like cubensis = 1x, pan cyan = 3x... or maybe starting dose recommendations?

As much as I know Stamets posted a lot of chemical assays years ago, they seem to be inaccurate to some degree and I would think the community could get it closer... That is if it doesn’t already exist.

It was done awhile back jrotten but I dont know where the thread is. It was a very detailed thread too.

ive found a chart but i personally do not agree with the numbers...
here it goes 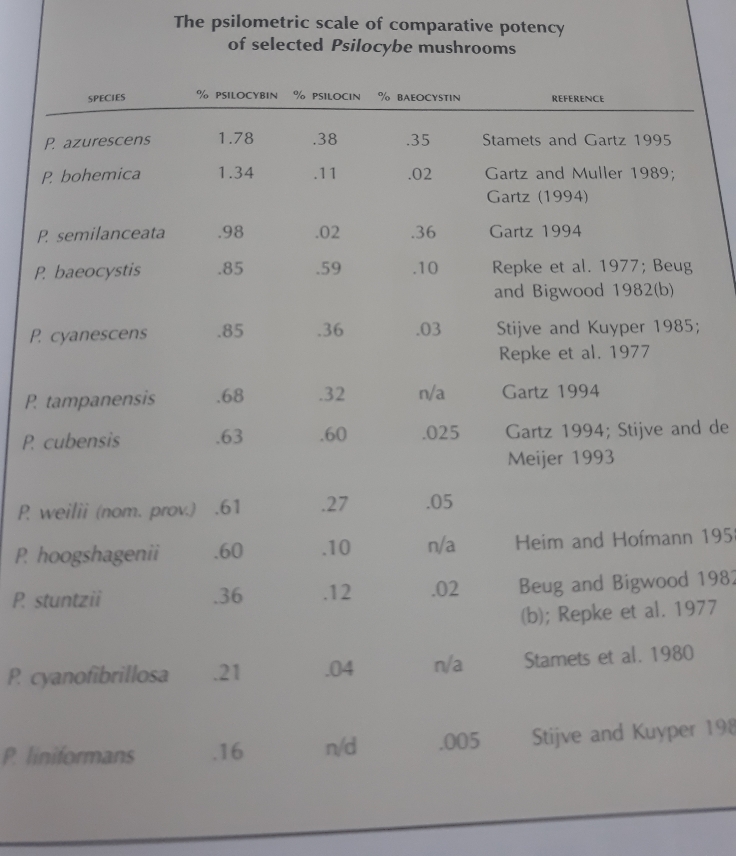 Yes I can say for certain the Hoogs/Semperviva is WAY off.  It's not even in the same ballpark as cubensis in my experience.  That's why I think the community can do a better job.  We have not just a lot of exprience, but also the common cultivars going around, similar substrates, similar growing environments rather than wild specimens in whatever stage, so on and so forth....

Yes I can say for certain the Hoogs/Semperviva is WAY off. It's not even in the same ballpark as cubensis in my experience. That's why I think the community can do a better job. We have not just a lot of exprience, but also the common cultivars going around, similar substrates, similar growing environments rather than wild specimens in whatever stage, so on and so forth....

exactly, the semperviva part was also what made me believe the chart is wrong... (most of stamets info is outdated and even wrong this days). i really wish we could send samples to labs to analyze them the same way the cannabis industry send their samples for potency analysis.. maybe a company in oregon in the near future?

i am  cognitively dense .....but did you mean Hoogs/Semperviva was stronger  or weaker than listed on the above document ?

Much stronger. Very much stronger. Probably on the order of pans and the other **warning** species. 7g wet was open eyed visuals. Cleaner physically.

I have never played with mycelated grain or even stones. I like to (try) to fruit mushrooms, I haven’t had the time and headspace to trip much in the last year or so. My focus has been on fruiting different species and learning to work with cultures. 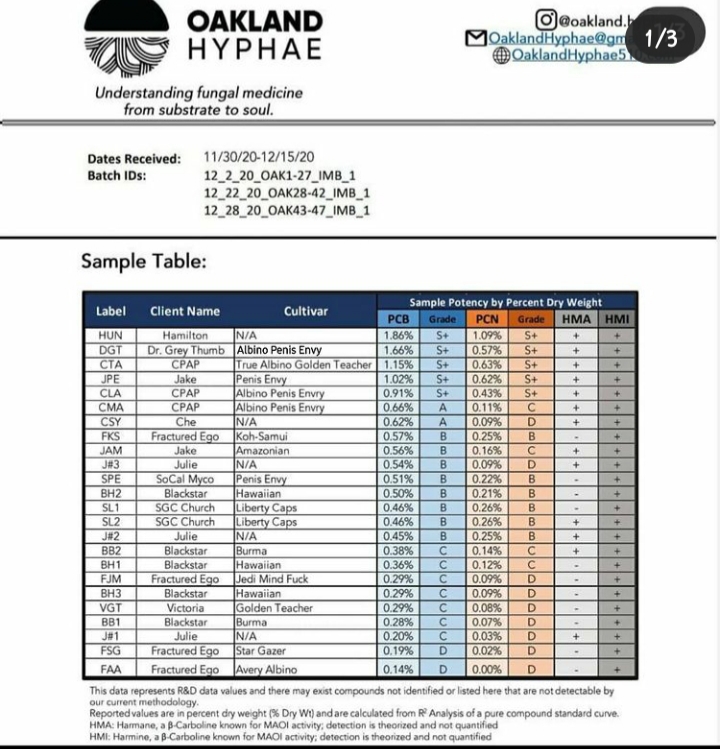 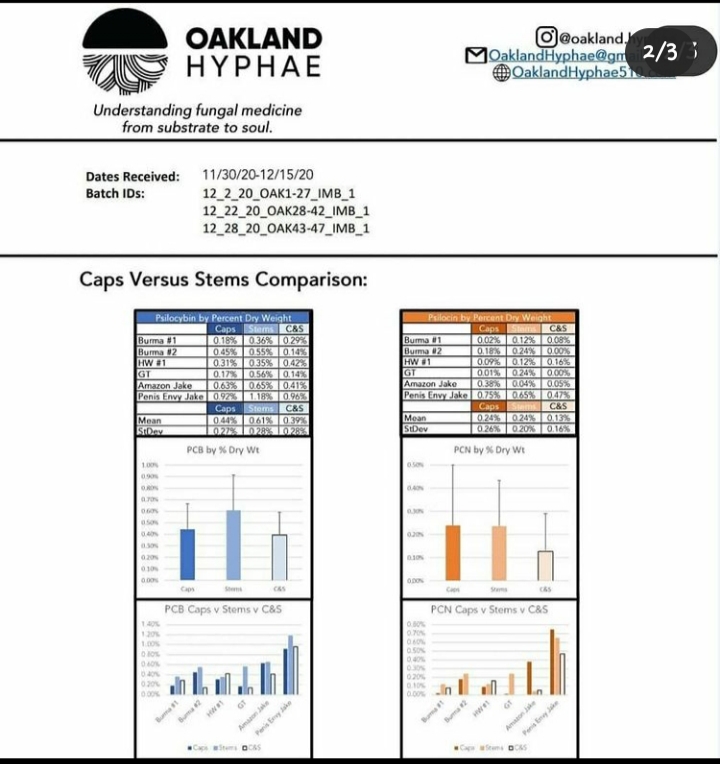 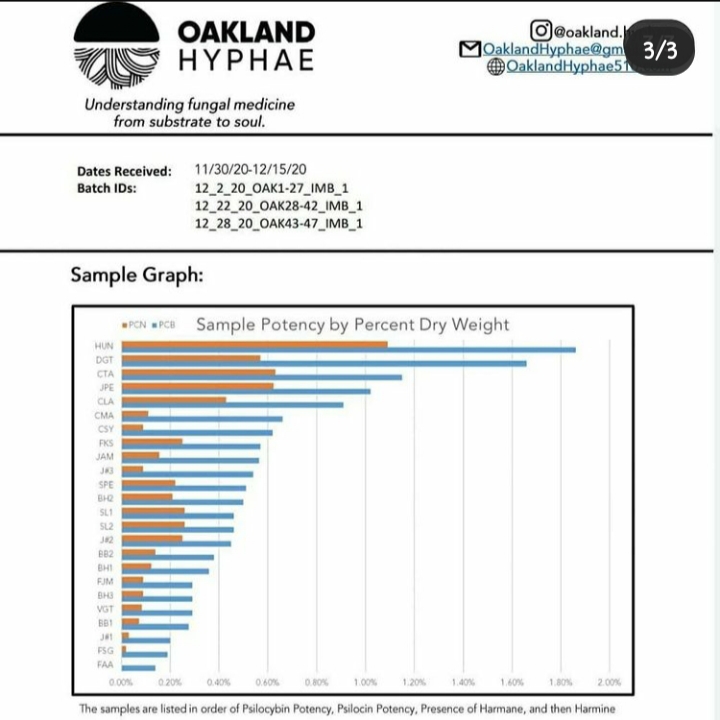 Interesting table. I wonder where the recently confirmed Psilocybe natalensis would rank on this list. Cultivators are describing it to be as potent as PE while offering a qualitatively superior experience to P.cubensis.

Interesting that they are using acetic acid for extractions!

Interesting that they are using acetic acid for extractions!

And here is how you do it. It seems like a simple process respectively and can be adapted to Kitchen Chemistry IMHO.

The extraction protocol [2] used 2 to 10 grams of pulverized mushrooms, the powder mixed with 100 mL of dilute acetic acid in a beaker and titrated to pH 4 with concentrated (glacial) acetic acid. After this mixture incubated for 1 hour, it was put in a boiling water bath for 8 to 10 minutes or until the solution tested at 70°C. This heating step dephosphorylated psilocybin to psilocin. The acid mixture was separated from the raffinate, brought to pH 8 with ammonium hydroxide, and extracted with two 50-mL aliquots of diethyl ether. The OChem foxtrot continued as the ether was dried over sodium sulfate, producing a greenish, psilocin precipitate that could be crystallized to a white powder using a 1:3 ratio of chloroform to heptane.

The benefit of this method resides in the product purity. Psilocin and psilocybin can be preferentially plucked from the mushrooms due to their solubility in the aqueous acetic acid, but many of the other molecules are left behind. [2]

So we can crystallize pure psilocin?

So we can crystallize pure psilocin?

I believe so but better have them amber vials ready lol. I don't think the purification is necessary though. Heck the alkaloids are water soluble so none of this is really necessary for that matter but it would be nice and easy to consume just tiny amount of powdery substance. Here is another Copy and Paste from Erowid. The 2nd extraction method is identical word for word from the other site i grabbed it from but this one has some other methods and references.

A simple aqueous extraction method for the isolation and identification of psilocin from Psilocybe Cubensis mushrooms is reported. This method employs a dephosphorylation of the phosphate ester to psilocin, which facilitates a greater product yield and simplifies identification. Psilocin extracted by this method is sufficiently concentrated and free of co-contaminants to allow identification by infrared spectroscopy and gas chromatography/mass spectrometry.

The tryptamines are one of four categories of hallucinogenic indoles in more than 20 classes of indole compounds comprising approximately 600 alkaloids1. Considerable research has been conducted with psilocin and psilocybin since their isolation by Hofmann et. al.2 Several extraction techniques1,3-6 have been used to isolate psilocin and psilocybin from more than two dozen species of mushrooms in four genera (Conocybe. Panaeolus, Psilocybe, Stropharia). The techniques that use methanol co-extract other compounds such as urea, ergosterol, ergosteral peroxide, α,α-trehalose, baeocystin, and norbaeocystin3,4,7. At present, a useful aqueous extraction procedure has not been reported for psilocin and psilocybin.

Concentration and detectability of psilocin and psilocybin are dependent on several variables, including:

The absence of glucose, which will prevent the production of psilocybin10.

Low levels of ammonium succinate, which will give poor yields of psilocybin10.

The growing medium, which requires a pH of less than 710.

Temperature: complete loss of psilocin and psilocybin will occur in harvested mushrooms left at room temperature for an extended period of time3.

Oxidation: psilocin will oxidize to a blue product (possibly accounting for the bluing color in the four genera containing psilocin and psilocybin)9.

Because of the increasing popularity of these mushrooms and kits available from drug oriented publications for growing mushrooms containing psilocin and psilocybin in cow manure a simple aqueous extraction procedure has been developed that extracts reasonably pure psilocin from mature mushrooms. This extraction method greatly simplifies the identification of psilocin from those mushrooms by infrared spectroscopy and gas chromatography/mass spectrometry (GS/MS).

A representative sample of 2 to 10g of dried mushrooms is ground to a fine powder by mortar and pestle. The powder is mixed with 100 mL of dilute acetic acid in a 250-mL beaker. The pH is readjusted to pH 4 with glacial acetic acid. After standing 1 h, the beaker is placed in a boiling water bath for 8 to 10 min or until the internal temperature of the acid mixture reaches 70°C. The beaker is removed and cooled to room temperature under running water. The acid mixture is separated from the mushroom powder by suction filtration using glass wool. The filtrate is brought to pH 8 with concentrated ammonium hydroxide and quickly extracted with two 50-mL portions of diethyl ether. Gentle mixing instead of shaking should be used to prevent an emulsion. The ether is dried over sodium sulfate, filtered, and evaporated under nitrogen with no applied heat.

Crude psilocin will appear as a greenish residue. Recrystallization from chloroform/heptane (1:3) yields white crystals. The resulting powder can then be submitted to infrared and mass spectral analyses.

This method permits rapid isolation of psilocin from hallucinogenic mushrooms by co-extraction of both psilocin and psilocybin. Dilute acetic acid is an excellent solvent for this purpose, because both compounds are very soluble in acetic acid11 and very little of other interfering substances are extracted, It is most likely some other compounds are co-extracted but are removed from psilocin in the ether extraction from the aqueous base. Psilocybin is completely dephosphorytated to psilocin by heating the acid extract. After addition of the base, extraction into ether should be performed promptly, because of decomposition of psilocin at a greater pH than 712. The extraction and dephosporylation steps produce reasonably pure psilocin from a small amount of mushroom material. Two grams of mushrooms will often be sufficient to obtain an infrared spectrum of psilocin (Fig. 1). Smaller mushrooms exhibits provide ample psilocin for mass spectral analysis (Fig. 2).

This method has been used in our laboratory for six months and has given excellent results in separating psilocin from methanol-soluble compounds. Other identification techniques such as gas chromatography and microcrystalline tests are possible on psilocin extracted by this method.

Beug, M. W. and Bigwood, J., "Quantitative Analysis of Psilocybin and Psilocin in Psilicybe Baeocystis (Singer and Smith) by High-Performance Liquid Chromatography and by Thin-Layer Chromatography" Journal of Chromatography, Vol 207, No. 3, pp. 379-385 (1981)

Horita, A. and Weber, L. J., "The Enzymatic Dephosphorylation and Oxidation of Psilocybin and Psilocin by Mammalian Tissue Homogenates" Biochemical Pharmacology, Vol. 7, No. 1, 1961, pp. 47-54.

What do yall reckon the HUN from Hamilton was, that thing fuckin rooooooocks

We can lay that caps vs stems shit to rest also, but we already knew that didnt we gents and gentettes?

Also is it just me or does the #2 APE look like it was added on poorly in photoshop?

Yeah caught my eye too. Why is it bold and different text.

I bet it was something stupid like Amazonian and someone was all butt hurt....this is canon in my mind dont fuckin change it!

That jenkem do be hittin tho