51 replies to this topic

We do still have a choice that will at least soften the impact of what we're heading towards: economic degrowth and refocusing our society's efforts towards maintaining a decent global standard of living at the lowest GDP possible (this will of course require major shifts in agriculture, transit, and so on). GDP and economic productivity, not population in itself, are generally considered the primary drivers of greenhouse gas emissions.

It's unlikely that we as a society are going to make the necessary decisions to get out of this intact, but it's defeatist and, honestly, monstrous not to try - the consequences of not doing so are dire, particularly for the "global south" and the less affluent parts of the world, and will likely be far worse than any previous crisis in human history...

.  What I wonder is when you say: "We do still have a choice.." who is this "We" ?  and when you say "our society's .." which nations do you suppose will stop opposing one another (with both wars, cyber attacks, & trade/economic wars) ? Which would be necessary in order to have even a chance of 'solving' some of the problems.

.   Given both all nations' track records, and individuals selfishness, which created all the problems in the first place, it would seem any alien viewing the situation objectively, and with no emotional bias or stake in the outcome, and a knowledge of the fates of all past empires, and animal extinctions, would clearly see which way the pattern is likely to repeat.

.  It may be well to remember that the present world "stability" is based on the premise of "mutual assured destruction", by enough nuclear weapons to cause a nuclear winter, and this has been the case for decades, since a short time after WWll.

Sounds like it's time to adopt the perspective of "tragic optimism."

It's a concept that's been popping up in articles lately (as in this week). It seems to be in response to the latest IPCC Climate Report, which would make sense.

It's arguably superior to "toxic optimism" (aka toxic positivity) since that typically requires some degree of delusion to maintain, such as the notion that a yet-to-be-invented miracle technology will suddenly emerge just in the nick of time (and at the global scale required to actually make a difference) and save us from ourselves. That might actually happen, but the probability seems vanishingly low so it's not something we should be counting on.

A few words about it from the guy who came up with the concept:

I speak of a tragic optimism, that is, an optimism in the face of tragedy and in view of the human potential which at its best always allows for: (1) turning suffering into a human achievement and accomplishment; (2) deriving from guilt the opportunity to change oneself for the better; and (3) deriving from life’s transitoriness an incentive to take responsible action. (Victor Frankl)

He wrote a lot more about it than that. For those who are interested (it's 8 pages, so is a long read by today's standards):

Likewise Paul Chefurka, creator of the website:  'Approaching the limits to Growth' linked to on the previous page, has adopted a Buddhist approach (meaning being both mindful and compassionate), in answer to his question: "how does one live in the face of the reality we now face".

I believe the existentialists and Camus, felt that if one looked at life with one's eyes wide open, and saw the suffering of everyone,  and one's own  inevitable and unpredictable mortality, that the same question confronted everyone that paid attention. And Indeed the Buddha's first noble truth (of 4) begins at the same point.

I would not have expected any rain at over 10,000 feet in altitude on top of an inconceivably vast sheet of ice, either. This can't be good news, but it's hard to say just how bad it may truly be.

Precipitation was so unexpected, scientists had no gauges to measure it, and is stark sign of climate crisis

Rain has fallen on the summit of Greenland’s huge ice cap for the first time on record. Temperatures are normally well below freezing on the 3,216-metre (10,551ft) peak, and the precipitation is a stark sign of the climate crisis.

Scientists at the US National Science Foundation’s summit station saw rain falling throughout 14 August but had no gauges to measure the fall because the precipitation was so unexpected. Across Greenland, an estimated 7bn tonnes of water was released from the clouds.

The rain fell during an exceptionally hot three days in Greenland when temperatures were 18C higher than average in places. As a result, melting was seen in most of Greenland, across an area about four times the size of the UK.

The recent report from the Intergovernmental Panel on Climate Change concluded it was “unequivocal” that carbon emissions from human activities were heating the planet and causing impacts such as melting ice and rising sea level.

"This can't be good news, but it's hard to say just how bad it may truly be."

indeed, we seem to be living in vast psychology experiment, where we can watch:

those who immerse themselves in business as usual

those who react with great emotion

those who find others to fight with, in order to distract themselves

those who think hope or God, will make a difference

.    It hasn't been a matter of debating numbers for a long time now, never the less, humans will remain  incapable of effective action, on a sufficiently large scale.

..."Greenland’s Massive Melt....A new satellite image captured over the southwestern part of Greenland shows the damage last week's heat wave did to the ice sheet."    and article, at:

I bet that the coastal map of Louisiana will need to be redrawn after Ida as there will likely be fewer barrier islands left afterward.

Maybe this will be the storm that finally gets a critical mass of people to finally take seriously the notion that it's time to stop rebuilding on doomed land and we'll finally begin to break the old cycle of "wait for predictable disaster, rebuild in the same spot, wait for next predictable disaster," etc.?

Here's to hoping the damage to all the major oil and chemical processing facilities that are being hit directly is not so catastrophic as to be an entirely separate industrial disaster on top of the global warming-assisted natural one.

Within my psyche there is what some might call a pessimist, ( & others a realist), and another side that likes to play with children, enjoy jokes, and puppies and so on. I will emphasize the 2nd aspect of my nature and join you in hoping for an escape from suffering, for all that is in the storm's way.

This was a pretty good article about global warming, too (from a newspaper in New Zealand): 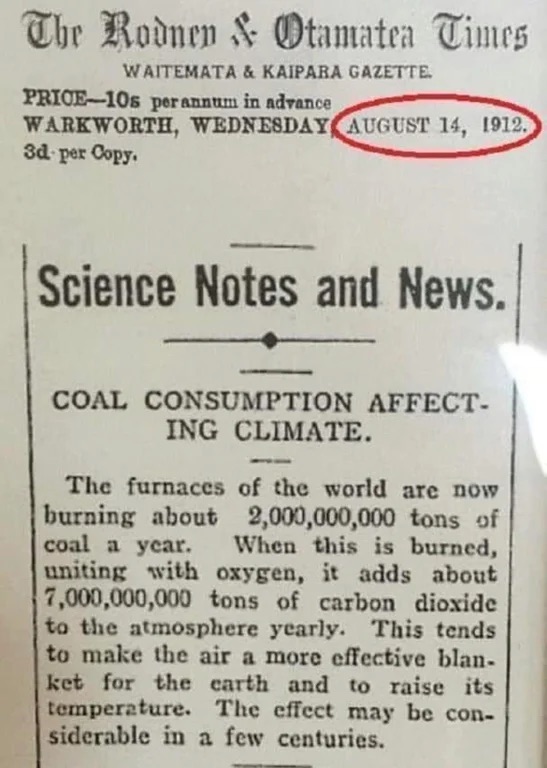 Wow - that's some research, all the way from New Zealand, over 100 years ago, in the year my mother was born, on a farm, and they plowed with horses and had kerosene lamps for light, and no telephone.

Now put: "the world at night" into a search engine and click, the "images" choice ...