23 replies to this topic

Green part of the cactus was sliced off, diced, and put into 2 litre containers. The skin and most of the short spines were left on. White cactus parts were discarded.

The diced cactus was frozen overnight.

Cactus was boiled vigorously with about 8 litres of water and 100g of citric acid for about 4 hours, until it no longer tended to foam. Evaporated water was replaced to keep concentration low. This could not be done all at once so it was done in 4 pot-loads, with 25g citric acid in each. 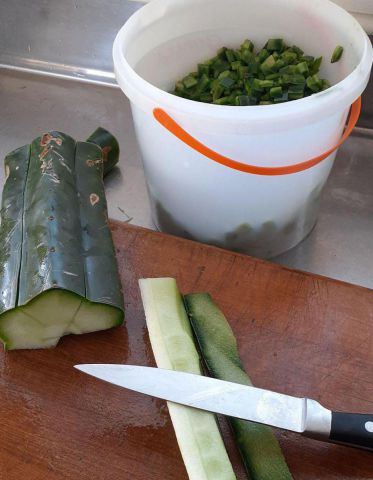 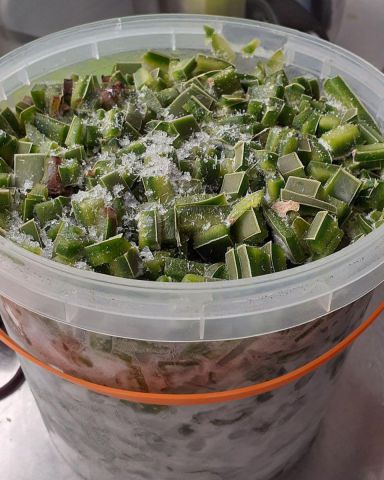 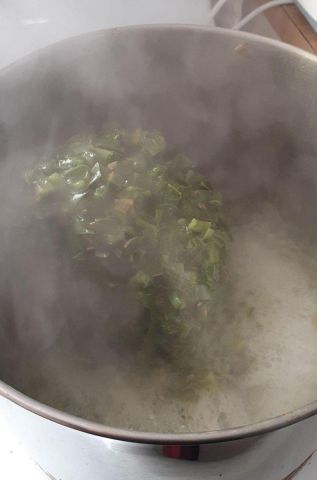 The mixture was returned to containers and frozen overnight.

Cactus mixture was boiled for about 2 hours. Some water was added to keep the total volume about the same.

Cactus skin pieces were removed by forcing the boiled cactus mush through a sieve. The skin was discarded. 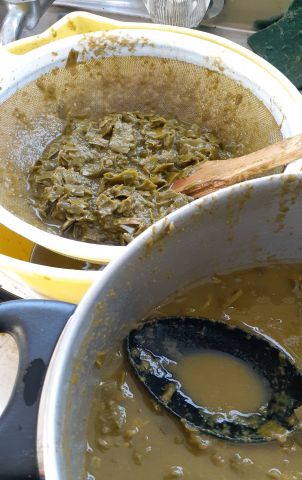 Mush was frozen for two nights, to ensure all was frozen solid throughout.

Cactus mush was boiled down to about 5 litres to fit into one large pot.

The mush was cooled to 50° and pectinase enzyme was added. The mixture was allowed to sit for 3 hours at about 50°.

The pectinase breaks down pectin, helping to break down cactus cells, as well as making filtering faster and reducing emulsions later in the process. Not absolutely necessary, but it seems to help.

The cactus mush was filtered through a loose-weave cloth to remove the bulk of the plant matter. It took some effort to keep things flowing through the filter. 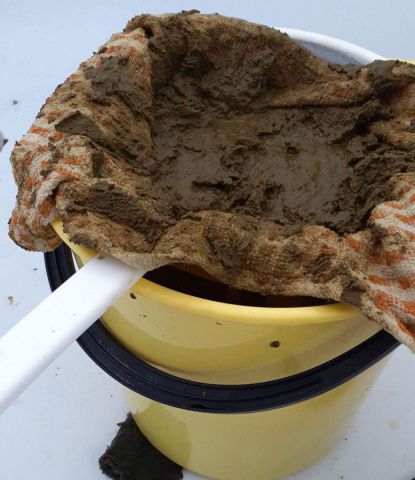 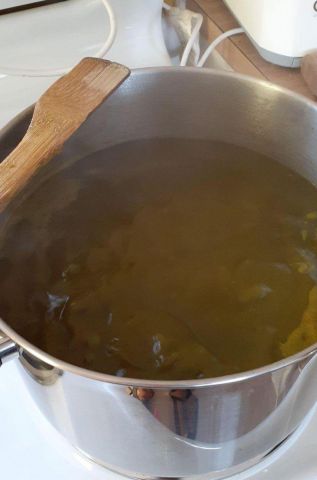 The final filtering of fine particles was done through a piece of shirt cloth. Liquid was allowed to drip through overnight, without any squeezing. A very fine, clay-like substance was left on the cloth and the filtered liquid was clear and dark reddish. 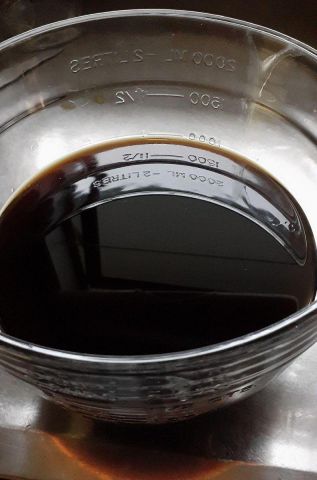 The cactus liquid was boiled down to 1 litre.

The cactus liquid was poured into a 3 litre HDPE mixing bottle with about 200ml of xylene. The mixture was shaken vigorously for about 1 minute then poured into a glass jar to separate.

After a few hours the layers had separated. The xylene and fat layer was removed with a baster and discarded. 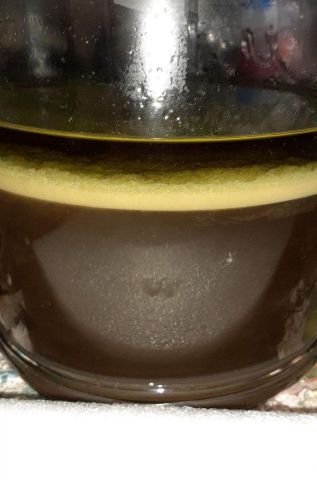 The de-fatted cactus liquid was poured back into the mixing bottle.

A bucket of ice water was prepared with some bits of ice floating in it.

About 50g - 100g of NaOH crystals were dissolved into the cactus liquid. This was done by adding the crystals to the mixture and quickly putting the mixing bottle into the ice water and swirling the mixture within the bottle. The bottle was taken out of the ice water to be swirled harder then quickly returned for cooling. This was repeated until all the NaOH was dissolved and the solution felt cool through the bottle and protective gloves.

About 100g NaCl was dissolved into the mixture at this point to prevent emulsion problems later.

Xylene was added into the mixing bottle at about 1 parts xylene to 3 parts cactus liquid. The mixture was shaken very vigorously for about 3 minutes, then poured into the separating jar.

Mixture was left to separate for about 6 hours or overnight.

When the layers had separated, the xylene layer was removed into a jar for salting out. 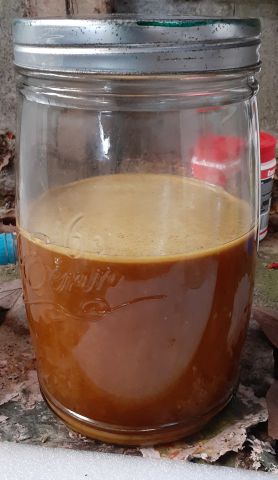 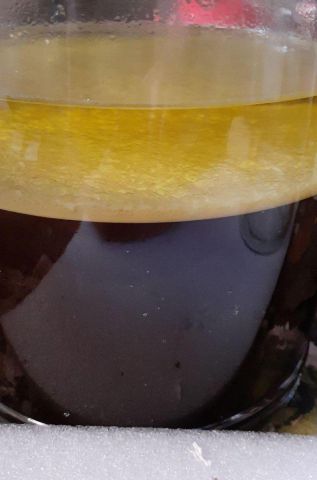 10 drops of 35% HCl and about 100ml water were added to the jar of xylene solution and mixed vigorously for about 30 seconds.

The layers separated quickly. Using a baster to take a little aqueous solution off the bottom, the pH was tested. If the solution was basic, a couple more drops of HCl were added and and the mixture shaken again. This was repeated until the indicator paper showed pH 7 or lower.

The aqueous solution was then removed to another jar for evaporating.

At this point the xylene was returned to the mixing bottle with the cactus liquid to start the next pull, so it could be separating while the following steps were done.

A glass roasting pan was used as an evaporating dish. It sat on a pot of boiling water for heat and was blown by a fan.

The aqueous solution was poured on the dish and left to evaporate. When the alkaloid salts were all crystallised out the dish was removed to a bench and the crystals scraped up and ground into a pile on the dish.

If the mescaline had not been acetone-washed before, it went on to be washed, Otherwise, it was collected as finished product :) 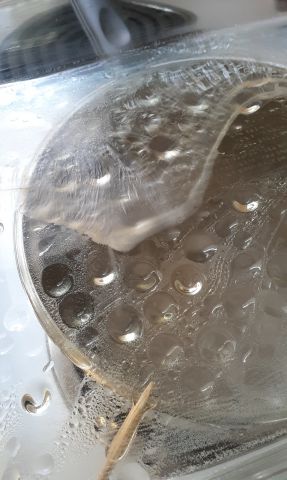 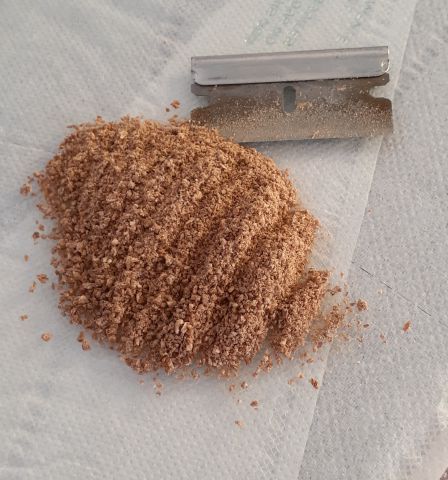 A glass baster without the rubber bulb was used for a filtering column. The column was stuffed with 3 cotton balls and stood up in a jar, with the narrow end at the bottom. A small funnel was placed into the top of the column.

The mescaline HCl powder was ground in a dish under about 30ml acetone and poured into the filter. More acetone was poured through the filter until no more colour came from the powder. Sometimes the mixture on top of the filter needed stirring to keep it flowing. Residual acetone was blown out of the filter by air pressure until the output was dry and not cold. The dirty acetone was discarded. 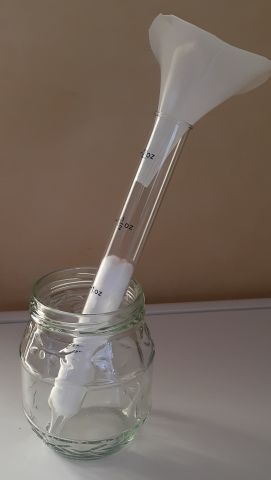 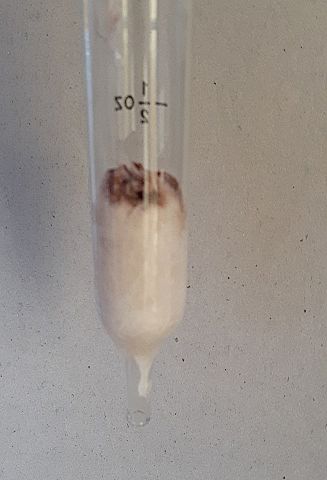 The evap dish and contents went back for evaporating.

The cotton balls were removed from the filter and discarded.

Repeated steps 4 – 7 until yield from a pull was too small to be worth doing more.

The final result after cleaning was 5.67g

What a great write up and photographs Greenskeeper!

Can't wait to hear your "test" report of the final product.

Very nicely done! Thank you for taking the time to document a large scale extraction!

The advantage Seeker is a crystalline product that can be easily stored & dosed by weight. Everclear extraction (in my understanding) is a full-system extract that can be rough on the digestive system whereas this is theoretically pure isolated mescaline hydrochloride.

If I am not mistaken, this method allows you to produce it in base form rather than as a salt... I'm pretty sure that is the reason for the PH manipulation.

got it thanks.  Always worried about working with potentially toxic chemicals.

I enjoy every part of this process. I like considering the chemistry of what is happening, I like the odours of the solvents, the magical mist from the HCl, and the mysterious process of crystallisation. I have so much fun doing this.

What a great write up and photographs Greenskeeper!

Can't wait to hear your "test" report of the final product.

As for a test report; I lick the glassware enough to be confident of the result, but I'm a sucker for peer pressure so let's see what 150mg does...

Excellent, that looks amazing. I bet the trip is so clean and clear. I've never done an extraction to this degree. Looks quite time consuming and somewhat complicated but as you said I enjoy the process when doing an extraction. Your product looks beautiful. Thank you for explaining it I would be interested in trying this. Did you grow the cacti? It seems like its hit or miss with buying online with the potency of the alkaloids. Last time I just did a mescaline tea Tek and drank the bitter juice. I bet taking it this way doesn't upset your stomach at all like the tea did mine

results are positive :) a light breeze and a gentle swell on the space-time today :)

It still makes ya purge brother. La Purga seems to be a constant with it lol. The only times I have gotten off without purging I was sorry I did. It seems a necessary part of the process.

It still makes ya purge brother. La Purga seems to be a constant with it lol. The only times I have gotten off without purging I was sorry I did. It seems a necessary part of the process.


I didn't Purge on my mescaline tea when I drank the tea but I wish I would have, lol. It was so bitter but I still had a great experience. I've tried synthetic mescaline but it didn't compare to the real thing. I think it was awesome even though my stomach hated me drinking it.

I didn't grow that cactus. San Pedro cuttings are one of the things traded on a local trading site. I bought a 60cm cutting off a guy and made a quick tea. Since then we have traded often. I'm growing many cuttings from his plant, but they're not big yet.

I've puked up cactus tea before but my friends and I don't get nausea from mescaline HCl. I've had 600mg of this stuff and no nausea or bad feeling. I know a guy who puked from the same stuff but I don't know what else he was doing that night. I guess we're all different.

Shulgin writes about synthesized mescaline in the front (narrative) half of PiHKAL, saying that it has a tendency to cause nausea during the come-up. His suggestion to minimize this is to dissolve the powder in fruit juice to mask the bitterness & sip it over the course of half an hour or more rather than drinking it in one gulp.

This is excellent advice in my opinion, not just for mescaline but all kinds of drugs. I tend to have a nervous stomach during the come-up regardless of what psychedelic I'm taking, and spreading out the dosing a little bit tends to take some of the edge off of coming up. It has the added benefit of making the come-up more subtle and removes the "holy shit, I'm tripping balls!" moment in favor of a more relaxed "oh hey, I've been tripping pretty good for a while now, haven't I? Groovy!" type of realization.

Glad your Thursday Afternoon "museum dose" was a success Greenskeeper. Thanks again for documenting the protocol and congratulations on a roughly 0.8% yield of very pretty looking product straight from fresh cactus in a large-scale extraction. Very well done indeed! I was particularly impressed by your purification column; I usually see that done with mortar & pestle & a vacuum filter, but I like your way better!

Seriously nice work!
Question- is there a reason you chose the acids that you did? Particularly HCl over sulfuric for the salting.

I use citric for the cactus juice because it doesn't smell and it's gentle on the cookware.

I use HCl for salting out because it is easy to get and because it's volatile, most excess acid comes out during the evaporation and some in the cleaning.

Thanks for the well-crafted post and good discussion, greenskeeper.  Archive material.

Good to have the topic spoken of. And the many pictures are awesome!
When I made my extraction I had to look up on another site for getting instructions.

Second that. Hell, pin it as an example of how to write up a procedure. No bullshit. No weird quirky little steps. No stupid irrelevant pictures of random crap. No potato mashers.

Back to Mescaline Cacti & Succulents