it's been a while, I've been messing around with some mushrooms thought I'd make a log here @papaindica

this is just showing how I pasteurize coco coir and an update of my version of Chronic007' version of Hippie3's invitro tek.

this was his end result

A few years back I did a half-pint version between Hippie3's invitro and Chronic's.
one main difference is this is made with WBS opposed to BRF... reason being sometimes if I got 6 to 12 Qt jars of WBS I like to make shoe box container grow at the same time.

I started with knocking up some WBS 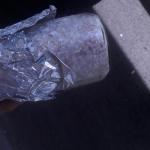 made some pasteurized Coco coir that I rinsed and rehydrated with vermiculture tea brew and some basic microbes Great White mycorrhizae lactose and light malt extract(LME)... it was just aerated it for 24 hours. 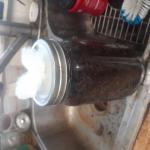 I squeezed it just above Field capacity and loaded the jars... I put it in the oven and set the temperature for a 170 degrees but I don't let it get to 170 degrees but close, the bricks are for the next step. 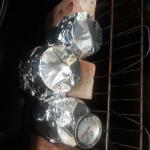 Sorry about the crooked picture
As you can see I put a cooking thermometer in one of the jars making sure to l get the center temperature of the quart jar.

When it reaches a 160 degrees give or take, I take the hot bricks out the oven and quickly put in the bottom of a styrofoam cooler this cooler is old as shit 5yrs, still works good though.. and quickly put in a gallon or more of near boiling water that I had at 165 degrees just short of a boil, 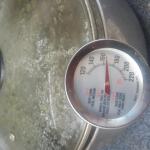 if someone tries this and doesn't have a cooking thermonitor it's 170 degrees when water gets all those little bubbles in the bottom of a pot before it sets to boil even IF it was too hot just taking it off the stove and pouring it into the Styrofoam cooler will drop the temperature a little so fear not. 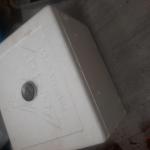 I found that while putting on the lid quickly after you pour the boiling water some of the heat wants to slightly lift up the lid and keep it from sealing completely but it's just for a minute... you can easily feel the heat escape where the lid meets the base so you'll know if heat is escaping .. I put a little weight on the top to be sure. 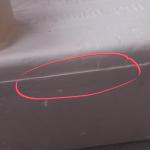 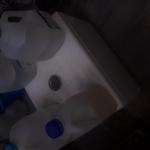 that's where we're at now, this is a variant of phase 2 pasteurization it's quicker but it seems to work... I've had it hold 100 degrees for 36 hours or more... will update in a few days.

24 hours holding at 100 degrees not perfect but it a work, see what it is in the morning 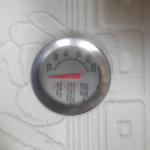 If your not familiar with Phase 2, of a pasteurization process, its a phase of bulk pasteurization a biological process to finalize the decomposing. While in phase controlled for a certain amount of time. In the first part of this phase – the pasteurization phase – the temperature is set to 56-60°C for 8 hours. After that, the temperature is dropped to 45°C for up to 7 days – a so-called conditioning period... we're not actually composting its a kind of simulating the same results of the ready compost that as a result results leaving only the thermolytic microbiology that actually thrives at I think 125 degrees but don't call me out on it. The thermolytics feed on the microbiology which would have eventually turn into what we call contamination and in turn mushroom
mycelium feed on the thermolytics that's a simple way to explain it regardless it's sort of a win win.

Good to see you hashman.

Good to see you hashman.

thanks! you too bro :thumbs: