3 replies to this topic

I made an experiment cultivating lophs on pure mineral substrate and it worked out fine. So I do a liitle reporting.

Lophs love it warm and humid when sowing so I set up a sealed box with smaller boxes inside. I found that box in a stationery shop.

The mineral substrate I had to sieve. Lava rock can be used, or pumice, or any other suitable rock granulate - even Zeolithe.

Usually you would sieve different rock seperately and mix but I found a compound of a number of minerals mixed together without any additives.

It is available for aquarium keeping from a popular online seller. It is packed as a coarse granulate in 10kg bags, so I had to sieve through it. On the bottom is the finer granulate and I had the luck of getting a sack from a batch that was on the end of a production line with finer granulate in it. Fortunately I had luck not to have to sieve the granulate so hard and so long. One must be a little crazy on cacti like me to really do this, otherwise it's hard to motivate oneself to do that work. And I needed the coarser granulate repotting three large bridgesii I had already gotten so I went straightforward ...

So here is the box:

It's very humid inside and the droplets from the lid fall down to the mineral compound. The compound itself I prepared in the microwave oven but only half the time you would spend heating up organic soil. Poreous rock can store a lot of water so I did not have to add water to it before I did the sterilization process in the microwave.

I let it cool down and watered it with distilled water. I didn't boil the water before. I have choosen distilled water because there can be microorganisms in tap and rain water you don't want to settle in your cultivation box.

On the surface of the wet compound of fine sowed mineral substrate I sowed the seeds. The size of the little rocks is about 1.4 mm, just fine enough to prevent the seeds splipping too far inside of the ground. But large enough to allow them to find a place just below the surface. That allows the seedlings to build a root without laying on surface. Indeed most of the seedlings made it into the ground quickly, only a few of them I had to transplant because they were laying on the surface. See the picture after one week:

These three were the first to germinate and from then each day more of them popped up. It is also interesting to observe the fine roots the seedlings will have in the first week already. I must say this is lophophora williamsi var. diffusa. Diffusa has a bit of an elongated growth and it may build strong arrow-like roots because when the plants get adult and old they will develop lots of pups on their base, These pups often develop an elongated base on their own and will grow rather tall in their first stage of development.

The seedlings developed very well in the following two monts and this is the picture I made today. They had only two times watering in the two months so far. I keep them 15 hours under grow light and during night I have them on a heat mat. After two months the heat mat is no longer necessary.

These are seeds I harvested from my large and very old diffusa. Over 30 of them were contained in an inch long seed pod. The plant came directly from the seller with the seed pod on top. I used these seed because I knew they will have an excellent germination rate. 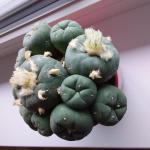 That is so cool! An inch long seed pod! So well done! I will be keeping tabs on this! My pupils are dilating just thinking about it!

Today I took my other loph seedlings and transplanted them to mineral substrate. The sub is a mix of lavastone and pumice carefully sieved to a fine granulate.

The seedlings have grown in organic soil so I carefully took them out without destroying the fine arrow root. They are a couple of month old and strong enough to be transplanted. I washed each of them after I took them out of the soil.

Then I prepared small plastic pots I got with small slits for drainage so that the fine substrate cannot fall out of them. I digged four holes in the ground with a pencil.

I decided to make the holes into the dry substrate although it will also work with wet sub. But for the seedlings with very long arrow roots I found it easier to prepare them on dry sub and gently shift the small rocks towards the transplanted seedling in digging another hole just next to the seedling. The granulate will 'roll' then towards the sensitive roots and give a precise fit without bending them or even squeezing them into the ground.

I watered the pots afterwards with a slight shower of the shower head in my bathroom.

In that case the holes can be made much more easy but the roots will have a little bit more stress when filling the gap to fit them into the pot.

I did both: I managed to fill a little container with the dry method and just before finishing I added the smaller seedlings to the wet substrate on the round pots.

All of these are lophophora williamsii but not var. diffusa. They are the real, active ones. The seeds I got from a whole number of small seed pods over the last two years.

Here are the mother plants: