Hey there, Chemistry Lab Side of Topia!

I've got a powerful itch to play around in the Lab, but don't really have the space in my 1100sqft house to set up a lab right now. I could maybe do some quick-and-dirty-extractions after work, but if you know me then you know that quick-and-dirty is definitely not my style

I'm basically renting this house from the 5 cats that live here, and I don't want to endanger them and my fiancee by setting up a Clandestine Lab in the bathtub with all kinds of dangerous acids, bases, and solvents. So I'm limited to Kitchen Chemistry right at this moment.

I'm trying to grow giant Halide (salt) crystals in my kitchen. They're kind of finicky, difficult crystals to grow, so I'm setting a challenge for my arrogant self in this first crystal growing experiment... Let's see if I'm as good as I think I am...

Sodium Chloride's solubility in Water is 36g/100ml at room temperature. I wanted to make sure I had a saturated solution, so I combined 200g Morton's Kosher salt (contains Yellow Prussiate of Soda as an anti-caking agent --Definitely an Impurity-- Might be a problem later on...) with 500mL "Purified Water with Added Minerals for Taste" from the local grocery store. I should have used Distilled water and Salt with no Anti-caking agents, but I don't think either will matter...

I heated the mixture up on the stove until the water got close to boiling. Then just let it steam until a raft of crystals formed on the surface. This guarantees that the liquid is a saturated solution.

I gently decanted the solution off the undissolved salt into 1pint mason jar.

Once it it hits room temp we'll move on.

I helped it out by bouncing into the freezer, shaking it up, back to the fridge...

You could definitely just let it sit for a day or so until it hits room temp...

Once the Jar has is the same temperature as the counter it's time to filter!

Now we have a Saturated Solution and we've got to filter out all the excess salt and impurities. Let's make a filter cone from a coffee filter...

Take your coffee filter, flip it upside down, and press it flat.Then fold it in half.

Congratulations, you've just made a fluted filter paper! Open the coffee filter like so...

Drop the filter paper in the funnel.

And pour the saturated NaCl solution through the filter into a new jar.

Now we have a perfectly saturated salt solution. Let's grow a seed crystal!!

I Transfered 50mL of the saturated solution to a tiny jar.

And transferred the Jar to a quiet shelf.

The Tiny Jar is behind the Teapot.

In 2 days or so we should see Seed Crystals forming in the little jar...

If that works out we'll move on...

This was one of my favorite activities in high school science. I've always had a fascination with crystal growing....and more generally just crystal structures themselves....

It's actually quite the important subject.......good stuff man!

I could probably get away with salt crystals though.....or slow grow rock candy on a string.....

I love growing crystals. Haven't done it for quite a while so I'll be watching to see how yours turn out Phineas.

Bismuth crystals were the last I did, but that was an outdoor project over a campstove.......

Strangely, I've never had any luck with sugar crystals despite multiple attempts. I suspect I rush the process (haste is a major enemy in crystal growing & definitely a vice that I struggle with) or just miss a simple little detail that nobody thinks to mention because it should be obvious. I'd love it if you grew some awesome rock candy with your daughter & documented the process for me Arathu...

In any case I'm finding kitchen crystal growing to be an excellent way to scratch the Clandestine Laboratory itch (which I inextricably get even though I wear a lab coat at work for 40-50 hours every week lol) without endangering my partner and our cats. I've got several projects planned (bismuth is on the list Skye, once I get some cheap cookware to ruin. Gallium seems like it might be interesting to play with too. Copper as well... Just sorted my change jar to harvest the pre-1982 pennies) that I can run in parallel with my halide experiments.

Thanks for the kind words, Juthro. It gives me a nice warm-fuzzy feeling whenever someone calls me Phin. Always a pleasure to see you :)

I will have to see if I can get some to grow....it's been a good while but we used get some mighty tasty strings....

I grew some alum crystals back in junior high, but that is the extent of my experience.  It was fun, and cool though.

Looking forward to seeing some results :)

No results yet, unless you count failure as a result. Roughly 4 days of evaporation and my tiny jar looks like this: 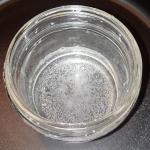 No seed crystals at all, only tiny grains of regular old salt. This likely means that there was too much solution and/or it evaporated too quickly. I didn't expect this, as my fiancee likes it cold, so we keep the house between 60-65*F during the winter (what we save on heating bills in the winter is quickly eaten up when summer comes around

) so there must be lots of airflow in the location where it was evaporating. Halide attempt #2 starts with 1cm of solution in a tiny jar with an upside-down pint jar covering it but propped up 1/4 inch on one side. Let's see what happens in a few days.

Funny you should mention Alum, though. I had a slow day at work the other day and did some playing around in my workday Lab

No pictures; cameras aren't allowed on the facility without a permit, and cell phones aren't permitted in the labs (they say it's an explosion hazard, but really it's about worker productivity

Potassium Aluminium Sulfate (plain old alum from Whale-Mort) has a solubility of 14g/100ml at room temperature. 400g of de-ionized water in a 1 pint mason jar was heated in a 200*F oven for about an hour before 56g of alum was added under agitation until it completely dissolved, about 5 minutes. The solution was allowed to cool to room temperature (about 6 hours) and just a sprinkling of alum was added to the jar to encourage any impurities to crystallize. Roughly 24 hours later the solution was decanted and filtered off a remarkable crystalline buildup into a clean jar.

[For some reason the Editor doesn't like this picture and I'm tired of fighting with it; find it below the post. Maybe if one of our super-smart Moderators has time they can figure out why it won't embed...]

Looking straight down into the jar:

50mL of the solution was transferred to a tiny jar and placed in the same evaporation area that I used for the Halide earlier. Alum is said to be a much more forgiving crystal to grow, but we'll find out in a couple days.

I also am working on a copper salt crystal that I'm really excited about, but first I needed to make some copper salts. To that end I picked through my change jar for all the pennies I had from before 1983. Older pennies are made from 95% copper alloy, while modern pennies are a zinc disc that has been plated with copper and stamped so they're only 2.5% copper.

Fun fact: if you want some relatively pure zinc but don't want to pay for it you can hold a 1983+ penny in some pliers and hit it hard with a propane torch. Eventually the copper plating will give out and the liquid zinc will plop down into your collection vessel. What you do with the zinc is your business...

) and I were able to sort them out. I ended up with 185g of pennies that are mostly copper.

To them I added 200mL of 5% white vinegar and 200mL of 3% hydrogen peroxide. Hydrogen peroxide is a powerful oxidizer which reacts with the elemental copper to form copper oxide (and O2 gas), then the acetic acid in the vinegar reacts with the copper oxide to form Cupric Acetate. The jar was left lidded, but not sealed to avoid a pressure build up from the O2 produced.

After roughly 48 hours, no more bubbles were observed, indicating that the reaction had reached an equilibrium. Observe the characteristic blue color that copper salts give in solution!

The greenish tint at the bottom of the jar with the pennies is precipitated copper oxide, the stuff that makes the Statue of Liberty green. It's insoluble in water, so it came out with filtration

I think I'm going to run the pennies through the reaction again, just to see what I get. Likely the oxidizer was used up before the acetic... There's some stoichiometry and equilibrium chemistry that I should be playing with, but that's math and I don't want to go there

After filtering and drying, the pennies were remarkably beat up! Some of them are paper-thin in places, and there was a net weight reduction of 4g!

I was left with a beautiful ocean-blue solution that I'll slowly evaporate until a seed crystal starts to form. I might need to find another place to evap this solution as it reeks of vinegar and I'm not sure that my fiancee will allow me to stink up the dining room for 2 months with an open jar of vinegar

So there you go. No results, but updates because we're doing this live

I'll be back within a week, hopefully with a seed crystal of some kind or another!

A content-creator question: Are these photos large enough to be inconvenient to anyone viewing them on a computer? I post with a laptop, but view exclusively on Mobile (where the pictures scale to the display) and reviewing this post in my browser I feel like I might be a little out of touch...

There is a joy of growing crystals of any kind! In this case, a very natural high! Thanks Phineas! I feel it from here!

Oh my goodness, friends! So much has happened since we last spoke! So sorry for starting a thread and letting it die...

Halide and Alum crystals are in suspended animation. They're very forgiving and we'll get back to them later.

The Cupric Acetate from pennies is what I'm getting back to today!
===========
That beautiful blue juice above quietly evaporated completely while my fiancee and I both got big promotions and officially tied the knot. Now that we are settling into married life & our new roles at work I finally had a chance to get back to this experiment.

I grabbed all the large crystals with jeweler's tweezers and set them aside.

They are pretty, but not pretty enough...

And re-dissolved everything in boiling water.

We're starting over again in a jar that's half the size of the original, and a solution that is twice as blue...

Let's see what happens this time...