3 replies to this topic

I'm at a point where I'm seeing enough success with my (relatively) new SAB that I wanted to post photos- in case my own designs and mistakes might help someone else whose thinking about building their own..

Ironically, i deconstructed my flow-hood for parts to build this- the electric-system (solar) in my house is no where near powerful enough to handle the flow hood- so!

The Location for my mushroom-'clean room' is pretty terrible- it's just next to my shower, which is just next to the kitchen.... The house that I'm renting.... the weirdest feng shui pretty much ever- First photo is a shot looking 'down' into my 'clean' room- It's an 8 foot square pool- inside the house (idk what the person who was building this house was thinking) It's not ideal but it's really the best spot I have to work with- and, the fact that I have seen success in this space is indicative that pretty much anyone should beable to find a suitable spot to do mush-work.

You can see my SAB with cover in the corner.

I plasticed over the walls and ceiling with heavy greenhouse plastic- which currently acts as a 'door'- Though the air displacement needed to enter I don't like much. I need to build some stairs- but other projects currently have priority. 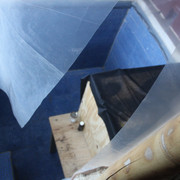 2nd photo- A picture from the side of the SAB-.

I don't remember who all posted in my thread a few months back asking about SAB techniques, but I took the advice to heart- 'LOTS OF SPACE!'  'BIG ARM HOLES' we're what people said. Well, my armholes are about 8 inches diameter, which is big enough to fit some 10quart shoe-totes inside.  Buttt. As far as size goes, I actually built the thing a bit too damn big. It's a real reach to reach the back wall to clean- and I have to stand on small stool to be high enough to work in the thing. I had the glass custom cut so unless I go back and get another top made, I'm stuck with it.... It's a minor inconvienience- but I share the story in case anyone else is thinking about building thier own.  It is possible to build it too big!

I'm a major nerd for 'flow' of process- so alot of my additions have been to create ease of movement. 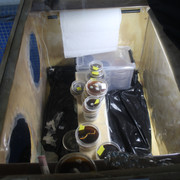 Paper Towel / tape holder= awesome- though I'm going to change the location to center and underneath the main worktable once I rebuild that to better specs (more surface area.) 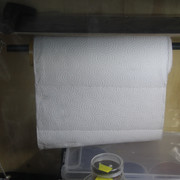 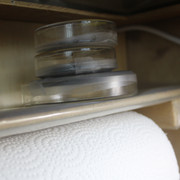 You can see in the last photo I built two 'plate shelves' on either side (Above the paper towel dispenser)- Which helps to get stuff off the work table when I'm doing alot of transfers etc.

Here's the best photo I could get of my work light- It's an 8 watt LED strip I screwed to the wall and added a visor on top of to keep glare down.

I guess I should also mention cuz I don't think you can see from the photos- I sanded all the wood down with an angle grinder, and then covered it in some weather-proofing- and additionally stapled the rest of the greenhouse plastic I had to the inside to create a non-porous surface. All corners/edges got siliconed. 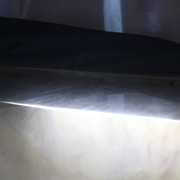 Next photo is a picture of the main workstation (movable) which sits about 6 inches off the table, and maybe a 2 feet wide. It's too narrow though- and I intend to rebuild it wider, and with 2 levels, along with pre-cut holes to act as 'cup holders' for my jar of alcohol / agar tools. 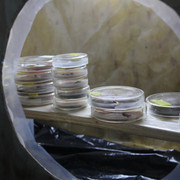 Whew! I'm finally feeling confident/competent with the agar after the last round- Partially I think due to the efficacy of the 'Antibacterial' agar experiments which I have definitely addressed some of the contamination issues I was having with yeasts/fast growing bacteria....

Currently, I have two 'recipes' running-

Black walnut hulls have been traditionally used as an anti-fungal and anti-parasitic for quite some time- And that's the main reason I have them on my shelf-  (I'm an herbalist and use it in formulas frequently).... So when I was in the agar mindset a week or so ago I figured... Why not try it?

So This recipe was '28 g Black walnut, in cold water, brought to a boil, simmered for around 30 minutes, and strained

So far, results seem promising, but need more testing before getting excited about.

First two photos of a Golden Teacher culture grown out from a transfer taken which has been sitting in the fridge for a couple of months - one on Green Tea agar, the other on the black walnut- The BW is slightly faster, because of having a sugar source, but not by too much. This culture seems FAST- hungry to get nourishment after being dormant for so long.  Kinda wispy, but I'm not going to be hard on em :) 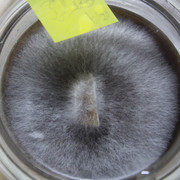 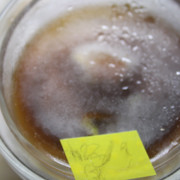 Next photo is exciting- 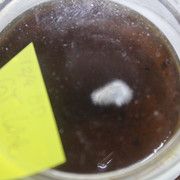 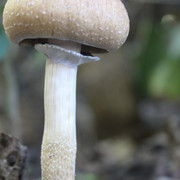 I took four transfers, split open the mushroom with my hands - which is challenging! (to avoid pushing bacteria into the sterile inside with a scapel)- From the top of the stipe, and from the inside of the fleshy part of the cap. It looks like This one is the only one actually 'taking'.... Which I suppose is a pointer that part of the agar game is 'statistics'-  Do multiple transfers until something takes! 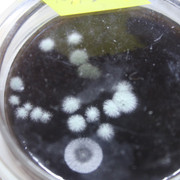 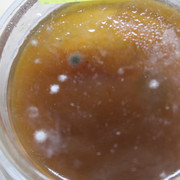 Terrible condensation in this plate- but! you can see the shard of lions mane body in the middle, surrounded by what (I'm pretty sure) is the re-vivification of it. This was my second attempt at reviving a culture from a dried fruit body ( from some lions mane I bought from China)

I've taken a second transfer from this plate, and I plan on taking it to grain tonight.

This was not done on the antibacterial agar. 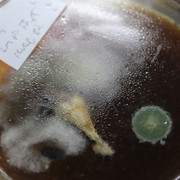 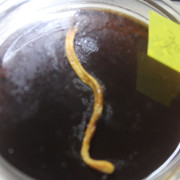 Heck yeah! I like your ideas about the agar recipes too. I recently made a few jars of water agar for clean up work.

Cool!
What do u think about idea to add some quartz lamp to sab? It costs only 10 dollars, and it seems to be very usefull to sterilize the air inside box. Did anybody test it?

I don't know anything about quartz lights sterilizing but more lighting while working is good.