I have been messing around with something in between indoor and outdoor mushroom growing. I make up a cased tray just like I was going to fruit it in an FC indoors, except I put it in a bin and cover it with a wet towel and put it outside instead.

This isn't particulary complicated, and frankly is a radical departure from my normal way of doing things (start as complicated as possible then slowly whittle it down to something cheaper and simpler). I suppose I'm getting wiser as I get older, which would be good.

- A white towel (let's more light through)
- Spring clamps
- Spray bottle
- Tray of cased substrate
- A bin it can fit in. (I suggest clear, but opaque works too if enough light gets through the towel)
- Hydrogen peroxide is optional but recommended

Launder the towel but don't put it in the dryer. Use bleach if you feel like it, but it's not necessary. Wash the bin well, dishsoap and water is adequate. Put the tray in the bin, clamp the towel to the top. Sometimes you need to fold the towel, which helps it stay wet longer and is good, I've found. Keep the towel wet. Keep out of direct sun. Keep out of reach of children. That's it!

You can clamp window screen on first to insure no flies or ants sneak in, or to help hold up the towel if using a large bin with a wide opening (use different clamps so the screen and towel can be removed separately; I prefer small 'binder clips' from the office supply store for the screen if I use it). 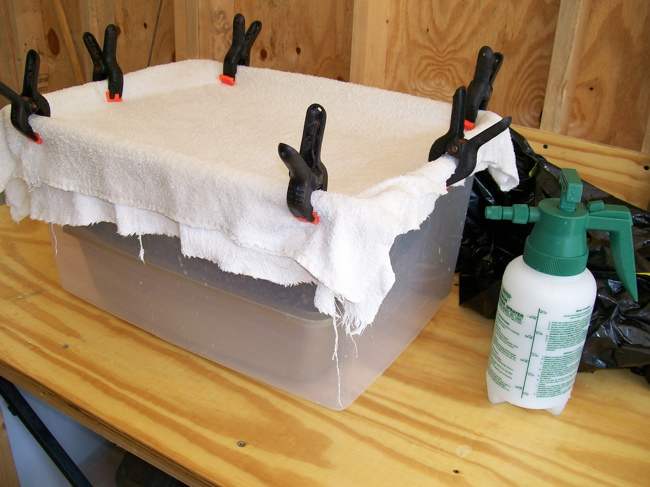 Picture of the pinset I got during a week of 102-105 degree weather (lows around 78) with 35% humidity during the day. I had to water the towel three times a day, but never lifted the towel except to take the picture. The towel allows perfect fresh air exchange and humidification: 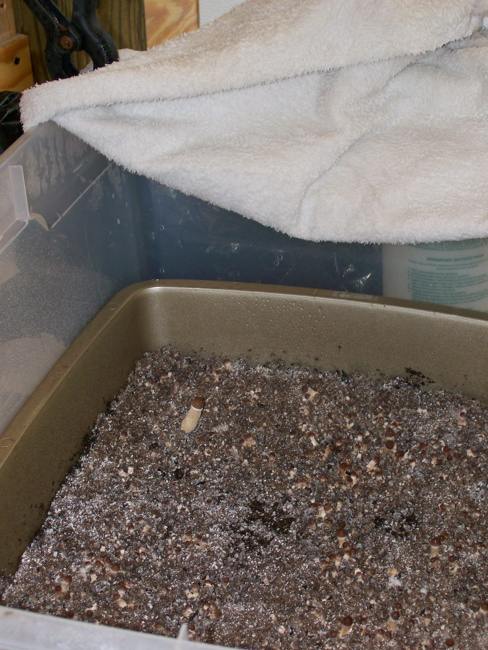 48 hours after taking the picture of the pins, I came out and found this: 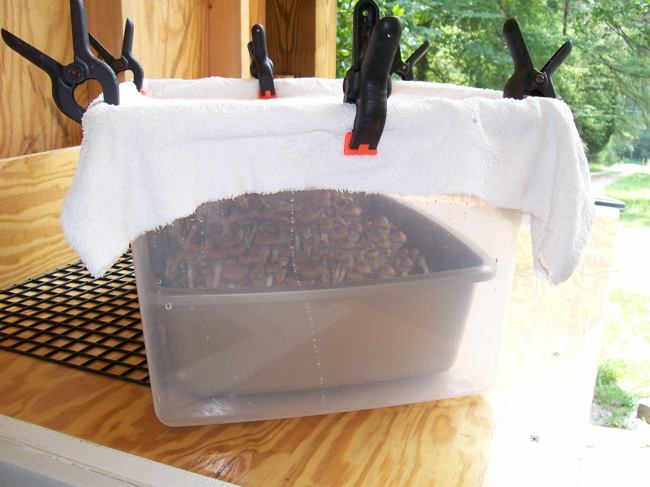 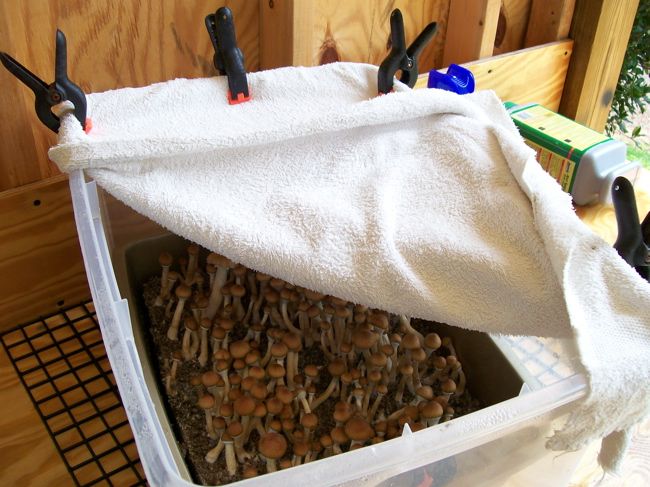 I sometimes need to mist the casing itself (between flushes, or if I accidentally let the towel dry out), and I like to add a little H2O2 to the sprayer. When I rehydrate the towel, if it's bone-dry I just take it off, dunk it in a bowl of water (with a lot of H2O2 added), wring it out and reattach as quickly as possible. Window screen is helpful here to keep flies out. If it's still a little wet I spray the towel heavily with the spray bottle. 4-5 flushes are common before trich or something sets in.

BTW: The towels have never grown mold, and I have done this for several years. I think the evaporation rate is too high to support mold on the towel, there is a lot of reflected sunlight hitting it, and I add H2O2 to the water I hydrate it with. Also, I wash it first in the washer with some bleach and remove it before the rinse cycle so it starts out very clean.

I originally came up with this in order to capture one or two more flushes from cakes. After getting 3 flushes indoors, I would dunk or inject water into them, scrape any contams and aborts off, crush the cakes into large chunks (1-2 inch chunks from pint jar sized cakes), toss into a tray and put it outside in one of these bins. I would routinely get three more excellent flushes outside from this, and after breaking up the cakes and combining them all into one tray, the mushrooms that come up are usually very large. This works equally well with isolates and multispore.

I discovered that I had been throwing away roughly 2 dry ounces worth of mushrooms for every 24 pint-size cakes if I let them do all their flushes as individuals. Mashing them all together after the first 2 or 3 flushes upped my total yield by a significant amount, and I have even squeezed a flush or two out of cakes that had already produced 4 or 5 flushes (I mostly got just a few huge individuals from the really spent cakes, but they were well worth the effort).

This is also a good idea for folks who happen to have a damn dry spell for months (like me).

i have been waiting for you to post this

- i have not tried it yet

but rest assured i will ;)

This is great! My two casings are stuggling with a final flush... Now I know what to do with them!

Hopefully this works for an extremely hot climate!

As to heat, remember that the flush in my picture came during a week of 100+ degree weather, and very low humidity.

When the humidity where I am is closer to normal (50-100% with 90 degree temp), this still works great, except I cover it with a piece of window screen, and I pull the towel away from the edge slightly at each end (exposing the screen underneath) so the airflow is increased. Several times I have been able to go a week and a half before having to re-wet the towel during wet weather, and when conditions are like that I make sure to add peroxide to the water I wet the towel with as a precaution. In late Fall, I'd put the bin in my kitchen at night, then back outside as the day warms up (until the days no longer get above 70). I have grown like this outside until mid-November.

This makes me wonder about a basement as a fruiting environment. The temperature down there is cooler, but stable. It would need to be heated significantly to keep it at a reasonable temperature? Or not until fall hits in this land of chilling winters?

More mold down there...

As to the rest, it depends on too many variables to assess from the info given.

Did you fan that at all?

Nope, no fanning needed; the towel allows plenty of air through, and the cooling effect of the evaporating water creates a slight convection that keeps it perfect. It is imperative that the towel not dry out, or your casing layer will quickly follow. Some misting of the casing was needed the past two weeks even though I kept the towel soaked, since 105 degrees F (40.5C) was just too hot and the casing was getting too dry.

And the idea for this did originally come from thinking about how to use the concept of swamp coolers for mushroom growing. I used to live in AZ, and recall how effective they were for cooling so long as the humidity was very low.

with a long towel
one could set that up
so it'd wick water up the fabric
reducing the need to mist.
likewise one could say
suspend a plastic jug overhead
with a pinhole dripping water on the fabric.
etc.