55 replies to this topic

When inoculating a large volume of grain, the more inoculant used (up to a point) the faster the grain will complete. Shredded/macerated mushroom mycelia suspended in water (a slurry) makes an excellent bulk grain inoculant.

In about 10 days, .5mL of spore or clone water can easily be turned into 600mL of mycelia slurry using a pint jar and popcorn. 600mL of slurry will inoculate a lot of grain...

Total props to Fahtster for first introducing me to this idea in his thread:
https://mycotopia.ne...ge-tek-revised/

Make all your lids with nice thick silicone ports. Use double Tyvek layers (one on the outside and one on the inside) for the popcorn jars. I find it helpful to attach circles of Tyvek to metal washers and then attach the washers to the lids. A dead air space between the Tyvek layers is important. The silicone used for the injection ports can be used to “glue” the Tyvek and the washers.

This is a picture of the lids and two popcorn jars. I like thick blobs of silicone. 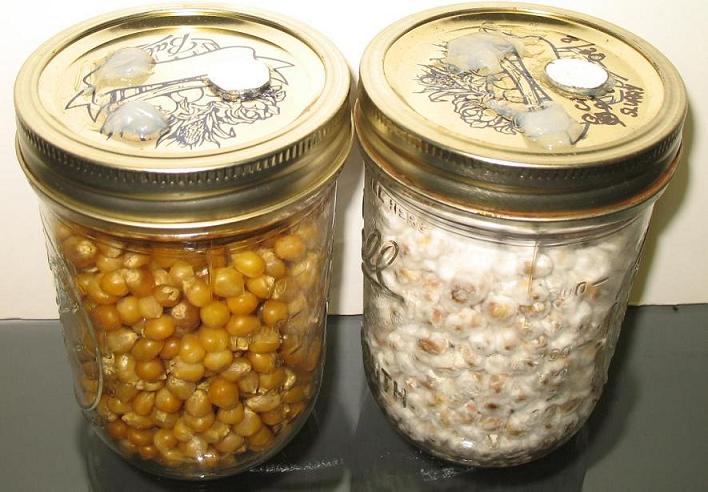 When you prepare the popcorn, it needs to be properly hydrated (not wet), as pictured. Don’t use a layer of verm in the bottom – it will clog the syringe later.

Inject .5mL of spore water into the sterilized popcorn jar and incubate until it is about 60% finished. Shake the jar up violently at 60% and incubate until it is 100% finished. Shake it up again violently (after 100% colonized) and verify that it recovers. The jar on the right has been beaten up real bad and recovered each time – this is very important.

Shaking the popcorn and verifying recovery tests for contaminants you can’t see easily. If popcorn doesn’t recover, it has an infection of some kind and the jar is useless for this Tek.

The mycelia will also grow much thicker inside the jar from all the abuse - this is very helpful for this Tek.

The night that you beat up the popcorn for the last time, prepare your sterile water, airport and whatever grain you want to inoculate. I like to PC the airport syringe wrapped in aluminum foil with the 60mL syringe when I do the grain/water. I always try to sterilize grain bags/jars the night before they are used. I like to sterilize EVERYTHING for 60 minutes @ 15psi. This is overkill for the water jars and airport.

Put the sterile water in 3 pint jars with two silicone injection ports each. Fill the jars to the bottom of the band line with tap water and place the bands on loosely. PC or boil sterilize the water jars. Be certain a vacuum forms under each lid. No vacuum means no seal means don’t use the water jar. Tighten the bands down after they are sterilized. Sterilized/sealed water jars can be kept around indefinitely.

After you get everything into your work station, use the airport syringe to bleed the vacuum from a sterile water jar. You should hear the lid pop back up a few seconds after inserting the airport. If the lid doesn’t pop – the jar isn’t sealed and the water should not be used.

Leaving the airport in place to equalize the vacuum, draw 60mL of sterile water into the large syringe. You will do the same thing in a moment to extract the 60mL of mycelia water from the popcorn pint.

Shake the fully colonized popcorn jar until all the kernels are broken up.

Inject the 60mL of sterile water into the popcorn jar

Repeat until you have put 180mL of sterile water into the popcorn jar. It should be almost full with about ½ inch of free space to make shaking easier.

Shake the popcorn jar violently for about 60 seconds.

Take the airport out of the water jar and put it into the popcorn jar.

Insert the empty 60mL syringe into the popcorn jar and extract the mycelia slurry. Use the airport to equalize pressure rather than the Tyvek to avoid any chance of sucking contamination into the jar.

Use the 60mL of slurry to inoculate a big bag of grain (or whatever else you want). That 60mL will be inoculating the pictured 8 cups of hydrated popcorn (medium spawn bag from sporeworks.com). Note the slurry jar in the upper right hand corner.

You can easily make 600mL-700mL of slurry from a single popcorn pint jar. Just keep putting in more sterile water and shaking the heck out of it.

This is the 10th 60mL slurry syringe extracted from a popcorn pint. Not quite as thick/rich with mycelia but still totally usable.

I find this process for expanding myc volume and generating large amounts of inoculant to be superior to using Liquid Cultures.

The primary reason is being able to visually identify contaminants on the popcorn – there are no easy visual IDs of contaminants in an LC.

Slurry syringes should be used within 3-5 days if not immediately. Any slurry not used immediately should be refrigerated (not frozen).

Dispose of the popcorn jar immediately before it becomes contaminated and a hazard in your grow area...

This is a fantastic tek. I have a few clones growing on popcorn right now and i was going to do a grain to grain transfer, but instead I think I'll try the slurry tek.

What is the time frame for a full jar of popcorn to colonize with this new slurry?

A popcorn pint will usually finish in 7-10 days when incubated at 84F-85F. It depends on what you start from. Spores are slower than clone tissue.

Awesome, I´d love to try this too ^^
My problem is with pans... I thinks it´s not too indicated for them =/
But I´ll definitlly try with cubies ;)

:bow:Sweet thread, Buckaroo. This tek deserves a write up as good as only you can post. :eusa_clap

A pint of corn gives an AMAZING amount of innocculant. I have used the popcorn jars and then allowed them to recolonize wth mycelia, to be used again as slurry a second time. I do agree, however that there is a much greater risk of contamination the second go-round.

Well done
Nice write up Buckaroo :eusa_clap
Hey how did you attach the tyvek?
superglue?
tyvek > washer > lid > washer > tyvek type fashion?
did you put silicon in the space between the tyvek?
Sorry for all the questions

Leave the space between open for fresh air exchange. Glue the stuff together with the silicone - it works great.

Are you using the same syringe over and over again?

bucky i know popcorn is your favorite, and the large kernels facilitate making slurry....but can you do this with wbs? i assume so, it would just be a bit harder to shake the myc loose from the grains. what do you think?

agar from shroomery used wbs in his tek that is closed to this one, but popcorn holds up better then wbs when it comes to storing it. that is why fahtster slightly modded this tek. for good reason too.

You could probably get WBS or rye to work, but I think you would get lots of little bits that would tend to clog the syringe.

Popcorn is great because it really shreds the myc but doesn't break down. Sometimes the slurry jars will even recover.

All the empty space lets you inject a lot of water as well.

Feels good to log on and see you back in the swing of Buckaroo.

Your guess on your own success rate
without that hood in you work station?

I have never tried making a slurry. TV's, Fosters, no ones
method. My main concern is/has been that the slurry seems
too vulnerable to contamination or I would just plain kill it
and Id lose days redoing jars.

There are methods that I/myself have grown a custom to
because I short cut things in this hobby. I may have to go light
on this or go heavy with that. My point being, would one err
side of caution without that hood? Or is the flow hood just over kill with those air ports?

To increase success rates with a slurry mix in general would one make a thicker
slurry or a thinner one. More water or less water. Cooler temps or warmer
temps..etc I know this has been a proven tec and 'just following the steps to
the 'T' ' would be an excellent answer. However, are there suggestions to increase
success? Even if those suggestions would in turn yield you with a bit less slurry
to go around.

So I made a slurry syringe without the airport, only utilizing the tyvek filters already on the lid. Wish me luck

Im sorry I guess my question wasn't more specific. I meant the same syringe during the initial harvest.

For example, do you take a sterile syringe, fill it with water, inject it into the colonized jar, then use the same syringe to draw that water back up?

Coyote - the flow station for this is total overkill. Total error on the side of caution (in appreciation of other work being done when those pics were taken - the station was fired up, why not use it). You should be able to do this slurry Tek in open/dirty air with no problem. I would flame the needle and/or use an iso swap in open air, but that is probably overkill too...

The thicker the slurry, the better. The only problem with slurry inoculation is all the water you add. If you don't have a little verm/coir on the bottom of a grain bag, adding 120-180mL of inoculant can cause moisture pools - and bacteria.

The only thing to make sure you do is shake the jar at least twice and wait for recovery. Three times is better. If a jar has any bacteria issues at all, those issues will screw the whole process to the wall.


OZ - the Tyvek filters work for safe air filtration, but they breathe a lot "slower" than an airport syringe. You get vacuum/suction buildup inside the jar and it makes filling the syringe a little more difficult. When filling a 60mL syringe with one hand and holding a popcorn jar up at an angle with the other, it is very annoying to have a vacuum pull plunger back in while you are adjusting your fingers.

Tweexican - the same 60mL syringe is used for everything. Suck up water, inject water, suck up slurry, inject slurry. All the same syringe.

Buck, have you abandoned LCs for this slurry method? Just curious. Peace.