To Bee or Not : Woodlovers Magical Honey


26 replies to this topic

It's been a great year for Woodlovers and I decided to preserve some of my dried woodlovies mushrooms in honey. I first learned about magic honey here on the Topia and decided to apply this to my harvest.

Here's what I used: 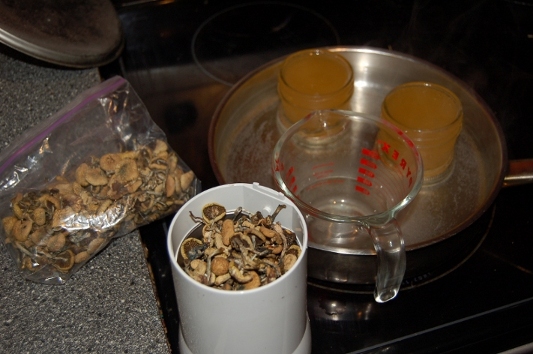 First step is to place the honey in the jars. Leave a small around of room for expansion. I weighed one teaspoon of honey and jotted down the results. Then I weighed the honey in a mostly full jar. It ended up being 310 grams of honey which translates to 26.5 teaspoons. Since I wanted to put 10 grams of dried mushrooms in each jar that would work out to approximately .5 /.6 of a gram per teaspoon.

So I filled the jars and placed them on jar lids in a pan of water so that hot water came up halfway up each jar. I heated this on medium until the honey was fully liquefied.

Meanwhile I took 10 cracker dry grams of Cyanofriscosa and placed them in my coffee-grinder. Ground that to a fine dust.

I placed my pyrex measuring cup in the pan to warm it up and then dumped one jar of honey into it. It slides in easily. Next I stirred that very well to fully mix and dumped back into its original jar. Because I left it just short of the top in the beginning it fits perfectly.

The process is repeated for P. Cyans and both jars of honey/mushroom are placed on the bottom of the pan (heat turned down slightly). Constant stirring helps distribute the shrooms throughout the honey.

The jars are left simmering on low heat for half an hour while being stirred regularly. After the alloted time heat is turned off and the jars are given one more good stir before getting a lid put on and set outside or in a cold place for rapid cooling and solidifying.

After cooling I made sure the lid was secure tightly and placed in a dark cool place for storage.

I'm looking forward to adding some Azure honey to the pantry as soon as I can. Just a few jars of woodlovers honey is a whole years worth of trips and journeys for a small group of tight friends ...

Much :heart: for the honey teks.

Also those dried friscos are adorable! Cubes always look ugly dried to me unless they were picked early before the caps started to open.

Also those dried friscos are adorable!

beautiful!!!! wish we had that many woodlovers around here lol

I made a batch with cyan's as well recently, a bit of added cinnamon, ginger, and nutmeg makes it taste like chai tea :)

That does make it a bit dangerous as it would be sooooooo easy to just eat several spoon-fulls. I'm waiting for the first mate of mine who dis-regards my warning to not be greedy. We shall be looking after them that night methinks. I did my honey at a ratio of 1tsp=1 gram.

I might actually add more honey just to be on the safe side, and to allow for having a couple spoons of that tasty stuff ;)

Man, don't let your granny put that honey on her biscuit!

Hype good job on the write up brotha. Are you gonna try the extract with everclear? I got about 15grams worth chillin, well not too cold. It will be ready next Friday, so just in time for thxgiving. Did you get any frisco prints by chance?

A spoonful of honey makes the medicine go down ...

Holy , is this stuff potent. Definitely no more than a teaspoon , and not a rounded one at that.

Full trip per spoon for sure. Caused a trip plus for a few folks.

guess i know where the rest of my shrooms are going this year... right on man. does it still come on as hard and speedy with the friscosas? any difference in trip compared to freshly dried? hows the taste?

Yah the taste is to good. They both hit fast , as do the shrooms themselves. I'd say 20 minutes and we all felt something.

We're still calling the Friscosa the artsy one , very visual and peaceful. The Cyans are visual to but in a more intense , darker colour-tone way. Not to say Cyans are anything like a bad trip , just more intense.

The crowd favorite so far is a combination of Friscosa's and Cyans.

The crowd favorite so far is a combination of Friscosa's and Cyans.

im gonna have to join that crowd pretty soon here... even amounts of each?

As you know the Friscosa's are chunky but airy as apposed to the Cyans that are super dense and shriveled hard. What we like to do is eat two small , dried Friscosa's each (fresh each one ways 1 gram , so .2 or .3 dry for two). Then 40 minutes to an hour later we eat 2 small dried Cyans each.

In 20 minutes they start to combine and its truly magical.

Every time we've been on this combo we've decided to go for a long walk which basically became the bulk of the trip. Getting beside running water or a lake is excellent with this combo.

You end up eating about .5 or .6 actual dried weight. If you want to journey further pop another two Cyans or Friskys.

Friscosa honey was a big hit last night for new years. Very nice gathering of people , diverse mix. Several people had a large dollup spoonful and had the corresponding whale of a trip.

Once again we felt the urge to top up the Friscosa buzz with a few stealth sticks of Cyans. The synergy between the two is so interesting ...

A great way to end the decade and dance in the New Year.

Everyone who can should grow & spread Cyanofriscosa. This is truly a life changing species.

I love this recipe. I will definitely have to give this one a try.

Peace and Thanks
Cult

Mine isnt as potent and i think i know why now. I just ground the shrooms, i didnt do the extraction process.

Ate a big spoon the other night and it still didnt kick my ass, was still good though. Also, i think my cyans are of a slightly weak substrain. Ive just kept em going from myc and think I may need to start from spore again next year.

I can't wait to try mixing with frisco's next year. You make it sound awesome Hyph. :)

Everyone who can should grow & spread Cyanofriscosa. This is truly a life changing species.