Holy crap! That oil slick is getting out of control but fast innit? Oh if only we had the technology to use plants such as hemp to power our vehic... *beaten with a blackjack and shoved into a burlap sack*

The big picture series always has the most striking photo's.

I saw Paul Stamets speak a week and a half ago and he spoke quite a bit about how catastrophic the spill is, as well as other topics of dramatic ecological disaster. Although he did go on about his Oyster myc cleaning up small oil residues he did NOT offer a mycological solution to this spill. the massive proportion was clearly upsetting him. It could be possible however that his myco methods could help in oil residue that has washed up on shore.

i read that the water / oil mix gets too thick for air needed for myco to work on it. 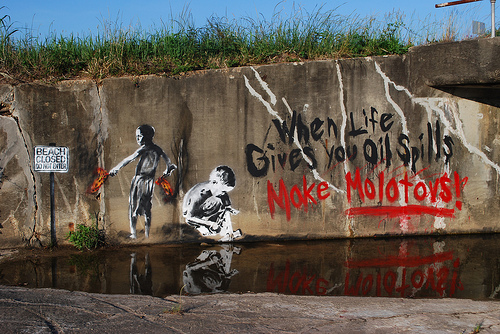 whoa zb, it may come to that.
They dont care how much life is lost
and even with profits being lost also
no one really cares yet.

but even if we did make molotov's
we share responsibility for where we are,
so where would we throw them?
who is really to blame?

Better to search exhaustively for solutions
before resorting to revolution
but i share your disgust and anger
and hope for evolution rather then revolution
...for now.

but the leak is still leaking and humanity will realize the true cost of oil
when it poisons our food and water and children
and sadly, only being on the brink
will force us to evolve.

I've been thinking about this issue a lot. AFOF lives in N.O. LA. The city and the surrounding communities have a very interesting culture. If the oil is already in Louisiana's estuaries and marshes it will be really hard to clean up. 70% of the U.S.A.'s seafood and 30% of oil and natural gas come from the area. Apparently Sugarcane Bagasse (a byproduct of Sugarcane, which is farmed in the area extensively) could be used to absorb oil. Later I read that one of the things oyster mushrooms can be grown on is Bagasse. I don't think any one has put the two together. To me this sounds like a winning combination.

Scientists Find Giant Plumes of Oil Forming Under the Gulf

Scientists are finding enormous oil plumes in the deep waters of the Gulf of Mexico, including one as large as 10 miles long, 3 miles wide and 300 feet thick in spots. The discovery is fresh evidence that the leak from the broken undersea well could be substantially worse than estimates that the government and BP have given ...

I wouldn't doubt those findings @ all. BP's propriety chemical dispersants (secret recipe) being applied at the two riser leak points are keeping a lot of oil from reaching the surface. Tar balls have been appearing behind the first lines of coastal defense, oil booms, and showing up on barrier islands. It's being hypothesized that the tar balls are floating under the booms lower in the water column. Outside engineers have calculated the leak to be much more than BP has admitted... My friend goes outside and can smell the chems in the air, so can the neighbors... Take away fried seafood and the drive through daiquiri shops will really be busy!

nothing will change till the people change


So True!
People don't change until they hurt enough to have to change. So far not enough people are hurting from oil to make them want to change. A recent poll of Americans showed that 60 % are still in favor of offshore drilling!
The earth will repair herself, but many creatures are going to suffer in the mean time. If mankind has a collective karma, we are all in a lot of trouble!

evolution in action
only the strong survive

ppl think environmentalism is for the earth

its actually for us

dunno that we can

This whole thing is so very sad with all the people and wild life its affecting. I dont think i will ever go to a BP ever again to get gas since they are incompetent at preventative measures to protect their best interests which is united states citizens and the environment. I hope that they don't recieve a penny from us tax payers. It always seems that when there is a big problem our government has deep pockets and pays for incompetance.

man its a horrible situation. but every one of us oil dependent people are responsible for this. regardless accidents do happen. and when they do, big happenings cause problems. the only real solution to this is getting off oil. everyone can bitch and moan all they want. but until we get off oil. we are going to keep polluting the environment.

sux too. we won't be having any good gulf shrimp or seafood anywhere in the near future. damn...

Hooray for american convenience at all costs.


Larry Schweiger, the president of the National Wildlife Federation, told the hearing that BP had failed to disclose the results from its tests of chemical dispersants. He also accused the company of trying to withhold video showing the true magnitude of the leak.

“The federal government should immediately take over all environmental monitoring, testing and public safety protection from BP,” he said. “The Gulf of Mexico is a crime scene and the perpetrator cannot be left in charge of assessing the damage.”

BP to continue using dispersant on spill
By GREG BLUESTEIN (AP) – 47 minutes ago
COVINGTON, La. — BP PLC says it's going to stick with the main chemical dispersant it's been using to fight the Gulf of Mexico oil spill, despite directions from the Environmental Protection Agency to use a less toxic agent.
BP Chief Operating Officer Doug Suttles says the chemical dispersant, called Corexit 9500, remains "the best option for subsea application."
He says that tests show Corexit was among the most effective agents at dispersing the oil. And he said Corexit was the only dispersant available immediately and at great enough quantities to be used on the spill.
Louisiana Gov. Bobby Jindal, members of Congress and environmental groups have raised questions about the dispersants, which are being shot into the oil plume thousands of feet beneath the sea.
The EPA didn't immediately respond to e-mails seeking further comment Saturday.

a pdf of BP's actual response to the EPA is available at http://www.epa.gov/b...ispersants.html

BP comes back and says "hey, we are already using the least toxic dispersant available"

meanwhile the oil continues to gush

the aura of incompetence grows larger and more painful to behold

i think they need to start discussing maybe firing a torpedo at the hole
maybe cause an earth slide that pinches that pipe shut?

or something more proactive and potentially helpful

~The one and only~

I love how their "solution" is to use the dispersants to make the oil slick sink down into the ocean...yeah, lets make the ocean aesthetically pleasing, that's real intelligent. And on top of it, reading the responses to some of the questions posted on the EPA site, they don't know what the dispersants will do to the wildlife in the sea, or humans, whether short-term or long-term effects. What the hell have they been doing with these dispersants since they've been made? Going untested since the day they were invented, why wouldnt they have been testing this stuff out years ago so we would already know what the effects are?!

Dumping chemicals blindly into the ocean like this has to be the one of the biggest mistakes I can see human kind making in a long time...because we all know that if it effects life underneath the surface of the oceans, no matter how far down, it will effect ALL life. Definitely angers me.
Not that humans haven't been doing it, but this is such a large quantity and right by the gulf stream.

It's amazing that we are on day 26 or more and BP is FINALLY trying something that may actually work ... at the very least 10 million gallons of oil later.

That live feed is interesting. They were doing something this morning with a vehicle the camera was mounted on, I think maybe getting a better visual angle on the now-closed mouth of the pipe.

I'm so glad not to see oil and gas rushing out into the ocean, for now. They say the challenge will be to keep it that way...

In the last 3 years, according to ABC news:

BP doesn't give a fuck about safety.